The Eleonora Project, Part 5: Fashion, Art, and the Propaganda Machine

Sheena Pennell explores the role portrait artists played in public relations during the years that the House of Medici reigned in Florence.

Portrait artists were the original publicity relations creators, occasionally embellishing the reality of their subjects. Photo courtesy of Andrew Neel via Unsplash

Editor’s Note: This is the fifth article in a series by Sheena Pennell about Eleonora di Toledo. Read Part One to learn about the inspiration behind the author’s quest to re-create the original burial stockings of Eleonora di Toledo. Part Two details Sheena’s investigations into the calculations that have allowed her to make the stockings as historically accurate as possible.

In Part Three, Sheena discusses knitting guilds in the 1500s and how they relate to Eleonora’s lady-in-waiting. In Part Four, she explains how valuable clothing was during Eleonora’s time and what was done to re-use and often upcycle articles of clothing. Here she discusses portraits, portrait artists, and public relations.

In the days before Facebook or even travel brochures, the best way to advertise was through what we would today call “fine art,” the paintings and sculptures that now line the halls of the world’s most prestigious museums and institutions.

Visual art has its own shorthand. Everything from an empty vase in the background to the color of the sitter’s clothing or the position of their hands was symbolic and conveyed a message to the viewer. Artists such as Raphael, Bronzino, and even da Vinci himself were less of the beret-wearing arteests we think of today, and more the graphic designers and public-relations men of their day. Think Mad Men in tights.

Agnolo di Cosimo, known as Bronzino (1503–1572), worked almost exclusively for the House of Medici and was in charge of their public image. In fact, Eleonora di Toledo (1522–1562), wife to Cosimo I de’ Medici, refused to be painted by anyone else. In addition to family portraits, Bronzino also painted Eleonora’s suite of rooms, though they weren’t finished until two years after she passed away.

As official court painter, it was Bronzino’s job to make sure everyone knew that the Medici were the best, the most impressive, and that they should be feared and respected—but were also approachable. After all, the way the Medici came to power in the first place was by being leaders “of the people,” presenting themselves as everyday residents of Florence, who just happened to have money. This image was cultivated from the 1400s, with Cosimo de’ Medici (1389–1464), a banker who rode around on a mule because of the Christ-like representation and because he was trying to give an air of humility and “oneness” with the people of the city. By the time of Cosimo I (1519–1574), the Medici were living in palaces and riding in carriages, but still presented themselves plainly as normal citizens.

Portraits, however, are another story. 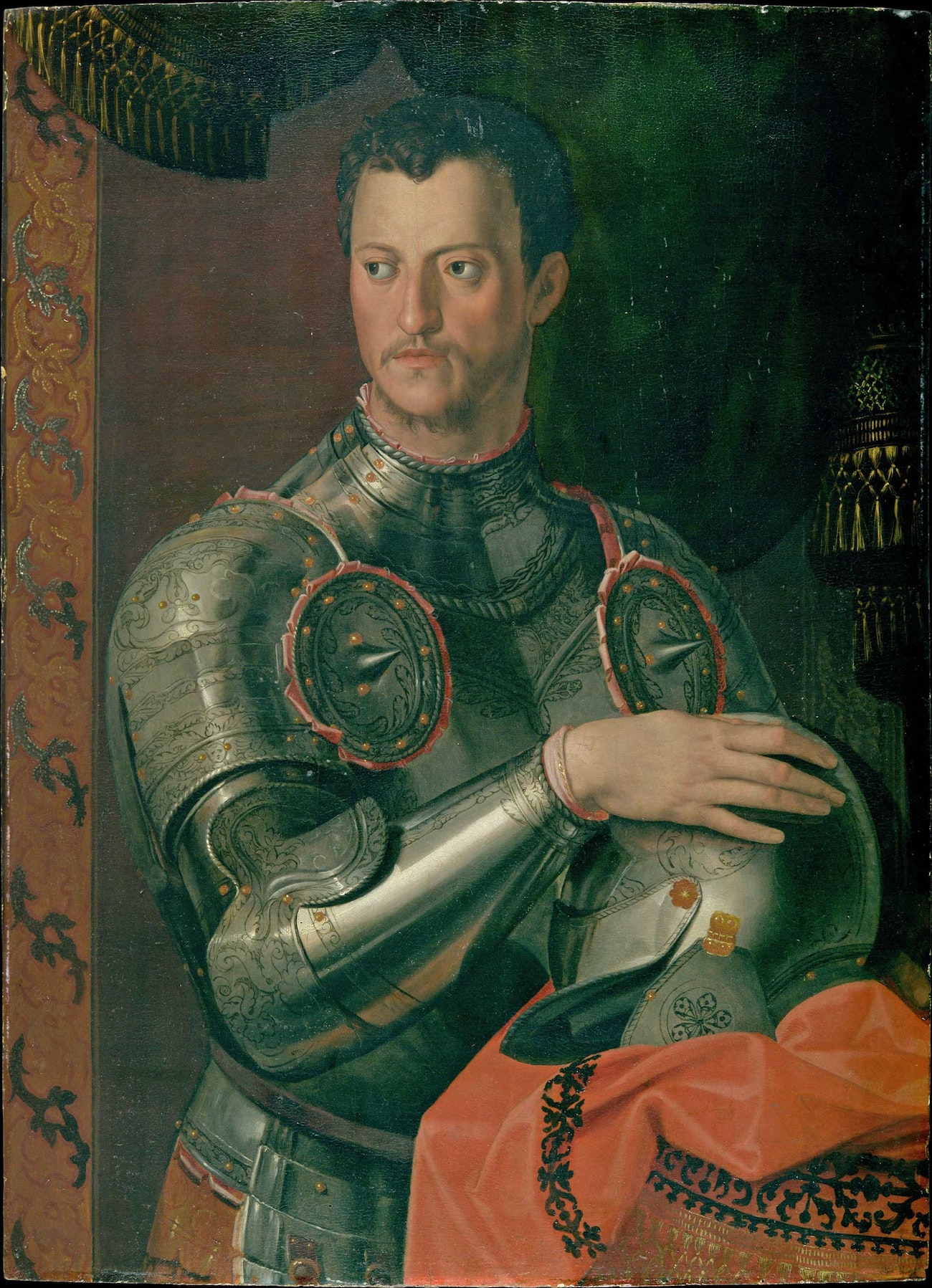 Clearly, we have a military leader. The details on his armor suggest someone with wealth, who would have a great deal of training and education. At this period in history, it was only the wealthy or the extremely gifted who became officers, so the fancy armor would, of course, belong to someone in leadership rather than a rank-and-file soldier.

Cosimo isn’t wearing his helmet, however. He’s gazing to the side in contemplation, someone who thinks before he acts and doesn’t rush into battle. His hair is close-cropped. This is a man with wealth and taste, but he isn’t bothered by vanity or current trends. Most men of the era wore their hair longer, but it would have been covered by a cap; his head uncovered shows that we are in a moment of intimacy with him. Though he’s a warlord, he’s not vicious; even the common people can come to him and have their cause heard fairly.

Except ... Cosimo didn’t train as a military leader. He was never conscripted, and never marched in formation. He was wealthy, which meant he could hire people to follow him into battle, regardless of how good or bad he was at leading them. In addition, because of the Medici’s position in Florence, he took control of the city militia. Despite never fighting with these men beforehand, he was in charge of leading them on campaign. This is back in the days when even kings still led their armies in battle, rather than coordinating things from behind the lines or in their palaces. Leading, rather than just commanding, was a way to earn the respect and therefore loyalty of the men-at-arms—which could provide protection later, if one’s leadership was ever challenged. 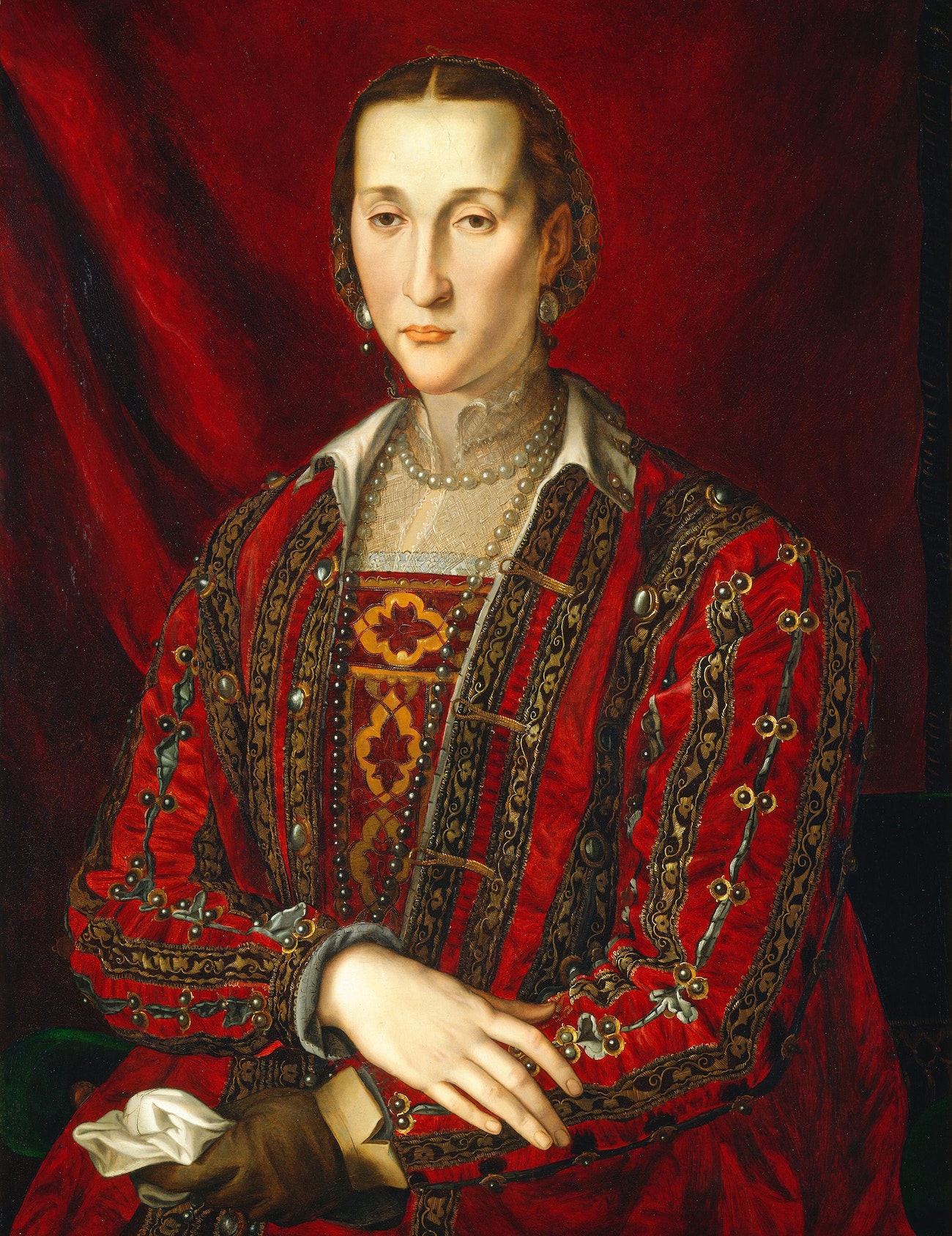 When it comes to portraits of women like Eleonora, the message could be far more subtle, at least to our modern eyes. In most of her portraits, Eleonora is portrayed wearing pearls, which were a symbol of purity, signifying her devout faith. In her famous court dress, the large motif on her chest is known as a “pomegranate,” which symbolizes prosperity and fruitfulness, referencing both her own personal wealth, the wealth she brought to Florence, and her many children.

While Cosimo and Eleonora inherited Bronzino from their predecessors at court, I think that one of the reasons Eleonora insisted he stay on as the official court painter was his skill at rendering textiles. Her court gown, made of white silk and thickly embroidered with black and gold, was loaned to his studio so the details could be rendered perfectly. To see the court portrait, or her posthumous portrait (both of which feature the gown) is to feel as though you can reach out to touch the embroidery, which seems to be raised up from the painted surface.

Eleonora’s own choice in clothing of course impacted the image presented. The bulk of her wardrobe was black, white, and gold, colors of the Spanish court, which signified her ties to Spain and the source of her wealth and status. She did have accents of red and yellow in her wardrobe, however, like the stockings that inspired this project. Red was an expensive pigment, and in images such as her 1539–40 portrait or 1560 portrait (shown above), in which she wears almost exclusively red and gold, shows off her wealth and status.

These are a few of the many ways Bronzino made the Medici look grander, more approachable, or stronger than they were in the moment. The Medici were definitely paying a premium for that symbolism, and not just for a pretty picture to hang in their palace.