The Traditional Red Embroidery of the Slavic People

Embroidery, one of the foremost Slavic folk arts, was so revered that it was mentioned in folktales, songs, and proverbs.

No color makes a bigger statement than red. From shoes to lipstick, it’s a color that gets noticed. The March/April 2014 issue of PieceWork explores this eye-catching hue with articles such as “In Red They Trust: Slavic Belief in One Color’s Consummate Power” by Mary Polityka Bush. Enjoy this excerpt from Mary’s article:

Embroidery, one of the foremost Slavic folk arts, was so revered that it was mentioned in folktales, songs, and proverbs. Every young Slavic girl had to perfect her embroidery skills, creating a large dowry in the process, to impress the matchmaker who would arrange a good marriage for her. Although techniques, stitches, and motifs vary from nation to nation, even from village to village, most Slavic embroidery, whether on clothing or household linens, is predominantly, sometimes entirely, red. The ceremonial or ritual towel—rushnyk in Ukraine and Russia, ruchnik in Belarus, käspaikka in Karelia (a region on the border between Finland and Russia)— received special attention. It usually was lavished with red embroidery at each end. 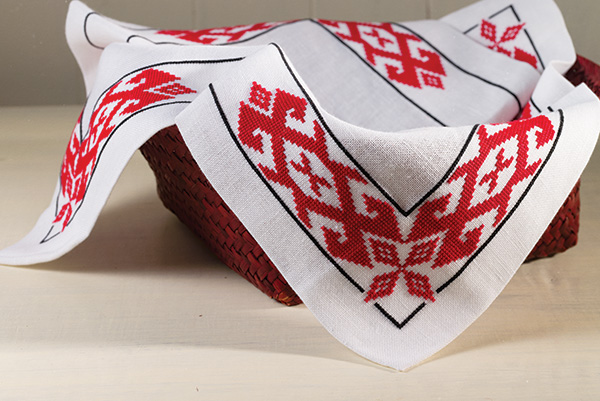 Welcome your guests to the table with Mary Polityka Bush’s charming “Belarusian Breadcloth to Embroider,” which was featured in the March/April 2014 issue of PieceWork. Photo by Joe Coca.

Ritual towels still play a prominent role in Slavic life. A newborn is wrapped in a ritual towel; the same towel may later play a ceremonial role in his or her marriage and, ultimately, death. A towel is wrapped around the shoulders or hands of a bride and a groom to join them. The couple may stand on another during the ceremony. A bride trails one behind her as an invitation to bridesmaids and unmarried friends to follow her into married life. She embroiders dozens of them to present to wedding guests as gifts. When someone dies, a ritual towel is hung outside a window to announce the death, and one may be draped over the cross marking the grave or stretched out to provide a path into the afterlife. In the years between birth and death, ceremonial towels are draped over icons in a home’s “beautiful corner,” over tree branches (to placate forest spirits), and on conveyances (to protect travelers).

Because the towels were believed to collect holiness, the older they grew, the more treasured they became. Magical or not, their red embroidery alone makes a powerful statement. The inner walls of the Rushnyk Museum, a former church in Pereiaslav-Khmelnytskyi, Ukraine, are hung from floor to ceiling with red-embroidered ritual towels, no two alike. The cumulative effect is breathtaking.

Mary Polityka Bush of Piedmont, California, a second-generation Polish-American, fondly remembers the Polish national costume that her mother sewed for her more than fifty years ago. The ensemble comprised a red woolen weskit, white blouse, red-and-white-striped skirt topped with a white lawn apron bordered with red rickrack, and a beautiful handmade wreath of flowers flowing with ribbons worn on the head. Alas, only the apron survives.

Download a copy of the March/April 2014 issue of PieceWork to read the rest of Mary Polityka Bush’s article and make her embroidered breadcloth, which is pictured above. Learn more about traditional embroidery in the blog post "Passed Down from Generation to Generation: A Grandmother’s Russian Embroidery."