Passed Down from Generation to Generation: A Grandmother’s Russian Embroidery

Many needleworkers follow in the footsteps of family members who stitched before them. PieceWork contributors are no exception.

Irina Stepanova used two elements from a face towel stitched by her grandmother Tatiana in Russia for this lovely hand towel. She incorporated the traditional Mothers and Maidens patterns.

Many needleworkers follow in the footsteps of family members who stitched before them. PieceWork contributors are no exception. Here’s Irina Steponova to tell us more about the inspiration behind her lovely traditional Russian hand towel, which was featured in the March/April 2014 issue of PieceWork.Her towel was based on a towel embroidered by her grandmother.

For this pattern, I used two elements from a face towel stitched by my grandmother Tatiana in Russia when she was eight years old. The four-band edge design echoes the traditional Mothers and Maidens patterns. The first band depicts “mothers,” identified by their headdress with curving rays or “horns” worn by married women. The third band is a row of stylized “maidens,” with raised arms and solar rays around their heads—somewhat of a cross between figures and geometric flowers. The second and the fourth bands are identical rows of berries, symbolizing women’s closeness to nature. Russian towels have both edges decorated with the same pattern for symmetry, and many are trimmed at each end with wide bands of linen or cotton lace. 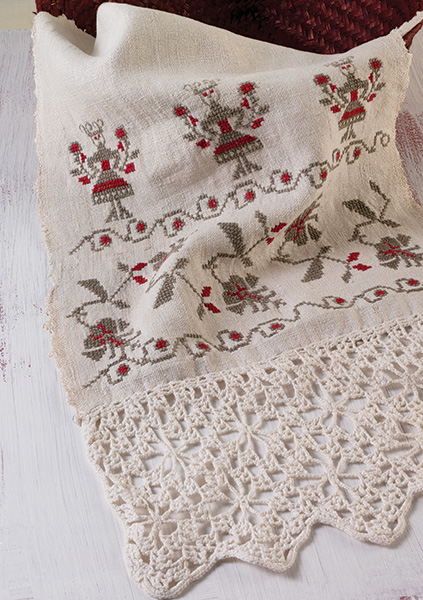 Traditional Russian towel stitched by Tatiana D. Romanenkova, in 1929, when she was eight years old. Oryol-Bryansk region, Russia. Collection of the author. Photos by Joe Coca.

In October 2013 in Moscow, my maternal grandmother, Tatiana D. Romanenkova, offered these comments:

“Every change of season brought its annual customary tasks for women in our village. Bright sunny days before spring planting were filled with hand-embroidering linen towels and clothes for the whole family. When the summer came, everyone worked in the fields from dawn to dusk, but as soon as flax was gathered, women spun and colored linen threads and textiles with natural red dyes made from madder root or from the cochineal insects living on wild strawberries. After the fall harvest, it was time to weave linen cloth on a large loom we had in our house. The loom could be set to different widths for either narrow linen toweling or wider canvas cloth. The finished linen textile was then bleached with wood-ash lye.

“My mother, Agafia, passed away two months after my father’s death, leaving behind seven children ages seven to twenty. I was the youngest, only seven years old, and my eldest sister, Evdokiya, who already had a family of her own, took me in. She taught me to use the weaving loom and to embroider. When I saw the designs I liked on my sister’s or a neighbor’s towels, I copied them in my own stitching.”

Irina Stepanova is a needlework designer and owner of Mishutka Design Studio. Her patterns are a tribute to women’s needlework throughout history. Visit her website, www.mishutkadesign.com, for patterns and inspiration.

Read more about Russian embroidery in Irina Stepanova’s article, “The Fiery Sun, the Glorious Light: Embroidery Traditions of Southern Russia,” from the March/April 2014 issue of PieceWork. Plus, learn more about traditional embroidery stitches from around the world with PieceWork’s Stitch in Time blog series.