Olga Fedorova had created her unique color-coded system in the late 1960s when she became quality-control master for the Orenburg knitting cottage industry.

Hand-colored chart and knitted sampler from the collection of the author. Photos by Matt Graves unless otherwise indicated

My personal relationship with Olga A. Fedorova started in 1991, in Olga’s hometown of Orenburg, Russia. It was a relationship that continued until her passing in 2008. In the 1990s, Olga embraced my plan to introduce and promote Orenburg lace around the world.

Olga visited the United States in 1996 to accompany my husband, George, and me on our first Orenburg knitted lace workshop tour around the United States and Canada. At this time, Olga neither spoke nor understood the English language. However, her remarkable enthusiasm made up for any language barriers.

Olga brought with her from Russia a folder full of paperwork, which she had prepared as handouts for prospective students. What a disaster this turned out to be; Olga had a unique color-coded system of lace charting that both the students and I had tremendous difficulty grasping.

After our second workshop, we realized we must translate the color-coded charts into a method that students would find easier to read. Also, we needed to translate the ten basic elements essential to the understanding and nature of Orenburg lace from the Russian language into basic English. The atmosphere between Olga and me often bordered on open hostility as we struggled to find common ground. Finding a more productive system for students didn’t come easily. 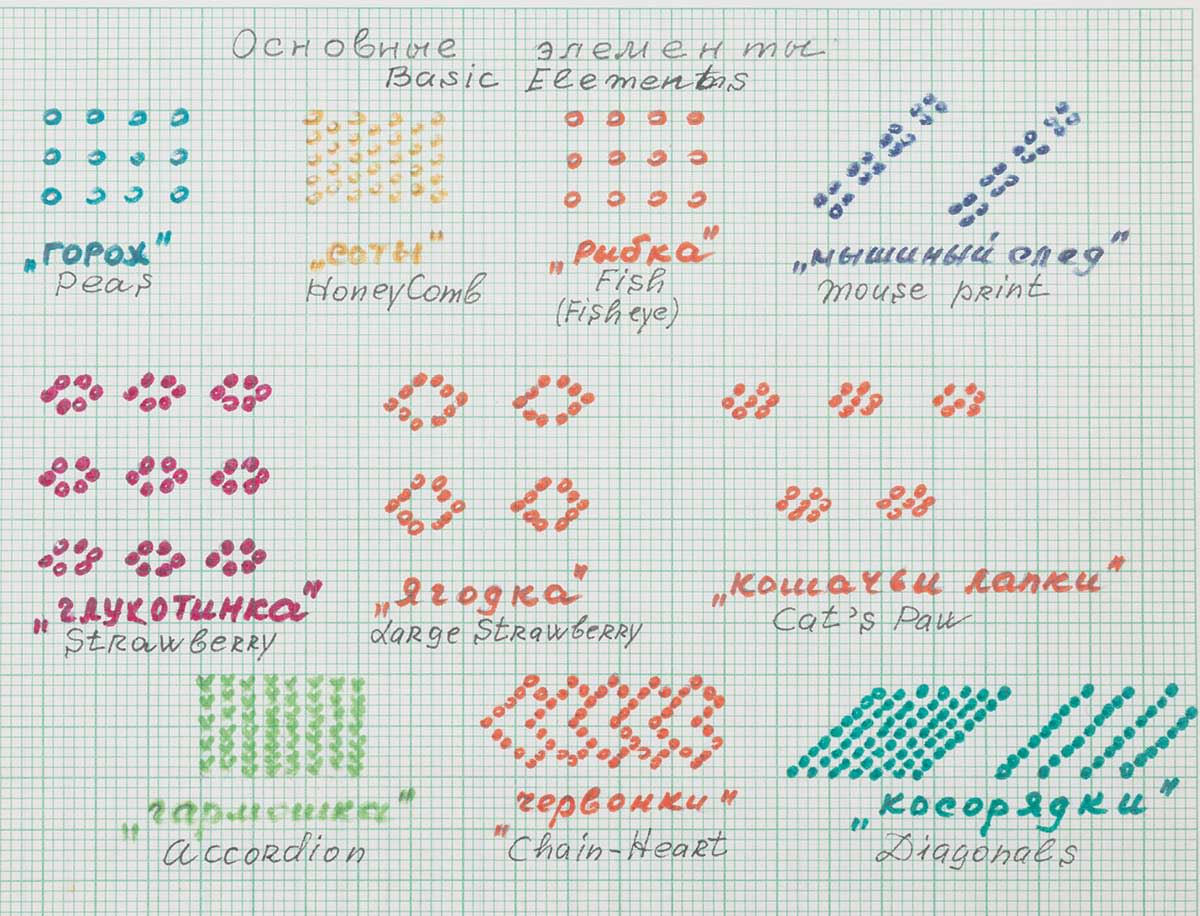 Hand-colored chart from the collection of the author.

Olga had created her unique color-coded system in the late 1960s when she became quality-control master for the Orenburg knitting cottage industry. She traveled extensively throughout the region, met countless knitters, and saw large numbers of unique designs, both old and new.

At this time, Olga created her own method to document designs—a method that would live on into the future. Later, when Olga became artistic director of the Kombinat (cottage industry) of about 12,500 women, Olga used her color-coded system to distribute new designs through every branch of this cottage industry in the region of Orenburg. The knitters of Orenburg, to this day, use this system with great success.

I have in my possession several dozen original designs. My goal is to translate Olga’s color-coded charts for lace knitters around the globe.

When I start new designs, I also use Olga’s unique color-coded system on graph paper. Once I became comfortable using her system, it proved to save much time and countless frustration.

The ten elements of Orenburg-lace design that Olga depicts on her hand-colored graph and matching sampler appear over and over in my designs. These elements can be combined, expanded, and shaped endlessly into beautiful shawls and scarves. 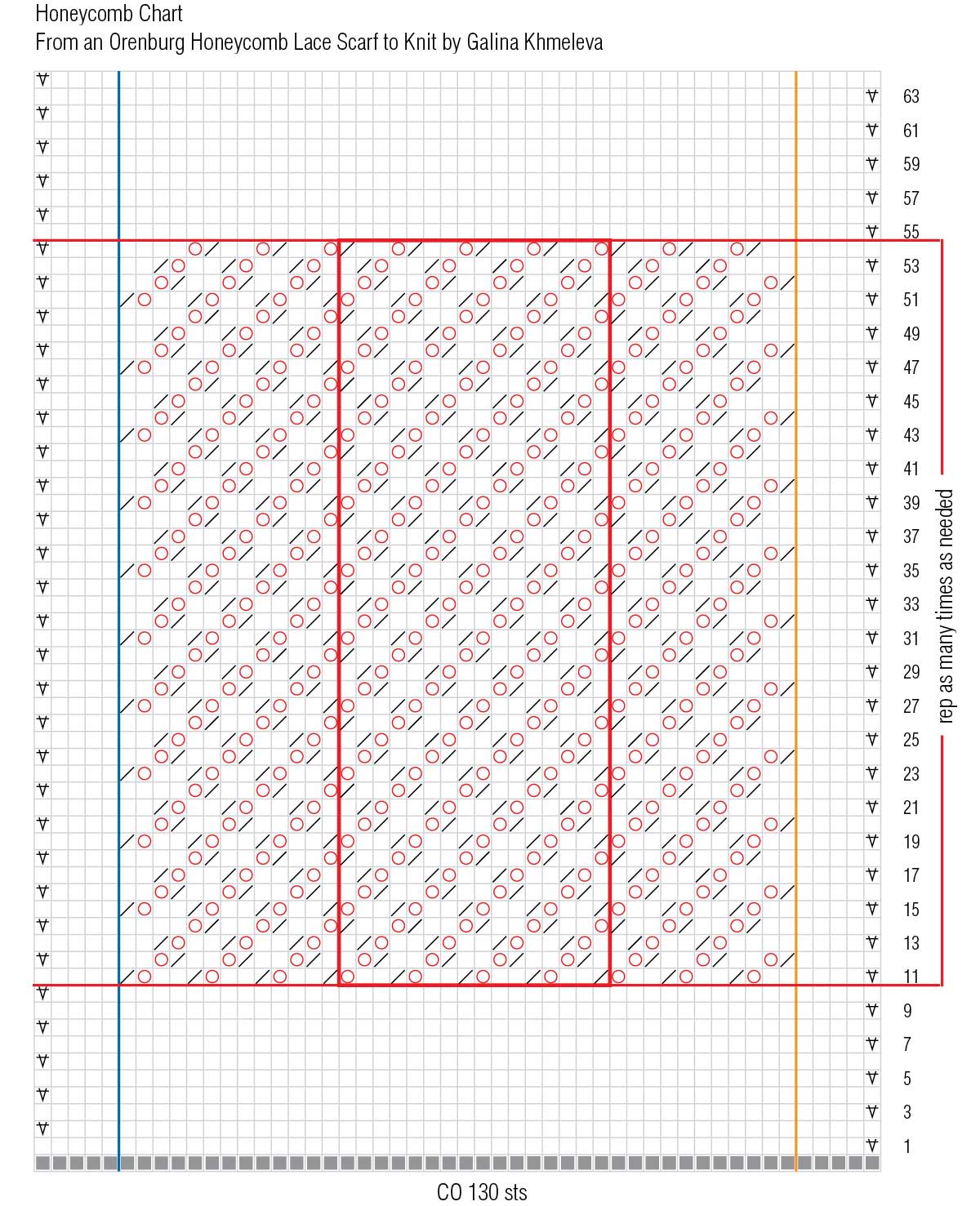 According to many of my students, of all the ten basic elements found in Orenburg-style knitted lace, the Honeycomb (Sotkiin in Russian) motif presents the biggest challenge. Thus, I always recommend that my students begin a Honeycomb lace project by knitting at least one swatch to both develop an understanding of and establish a rhythm to the Honeycomb element. It can be used as an all-over pattern, border motif, or a smaller pattern element surrounded by other Orenburg lace motifs. An Orenburg Honeycomb Lace Scarf to Knit by Galina Khmeleva, featured in PieceWork May/June 2010, includes the Honeycomb motif as an all-over pattern. Photo by Joe Coca

Galina A. Khmeleva is the owner of Skaska Designs and author of two books about the history and techniques of Orenburg lace shawls. A former clothing and costume designer who worked with the aristocracy of St. Petersburg’s music and theater society, Galina was a pioneer in breaking down barriers in the new Russia to give Russian women the opportunity to achieve ownership status in private companies.

This article originally was published in the Spring 2020 issue of PieceWork.