Postcard from Scotland: The Great Tapestry of Scotland

Scotland has a long and colorful history—143 meters (469.2 ft) long, to be precise! That’s the overall length of the 160 embroidered panels of The Great Tapestry of Scotland.

This panel incorporates details of many of the images shown in the panels. Panel stitched in Beith and Kilwinning by KA Two, Linda McClarkin, and Carol Whiteford. All photos by Kathy Troup.

Scotland has a long and colorful history—143 meters (469.2 ft) long, to be precise! That’s the overall length of the 160 embroidered panels of The Great Tapestry of Scotland. Each panel celebrates the history of Scotland from the end of the last ice age right up to the 21st century.

The tapestry is the brainchild of bestselling author Alexander McCall Smith, historian Alistair Moffat (who provided key themes and text for each panel), and artist Andrew Crummy (the man responsible for the tapestry’s beautiful illustrative designs). The Great Tapestry of Scotland was created in just three years, and the recent exhibition at New Lanark Mills World Heritage Site focused on the making of the embroidery, revealing fascinating insights from stitch coordinator Dorie Wilkie and showcasing the original sketches by Crummy.

Several of the panels on display at the opening exhibition of The Great Tapestry of Scotland at New Lanark Mills World Heritage Site. Robert Owen, a mill manager, persuaded his partners to buy the mill at New Lanark and he made a series of reforms to benefit the mill workers and their families. 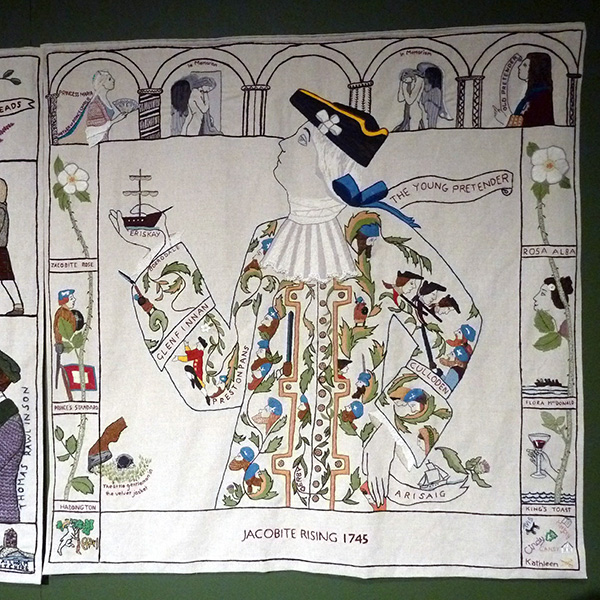 The “Jacobite Rising 1745” panel 60 from The Great Tapestry of Scotland. Prince Charles Edward Stuart and his generals led an uprising and clansman flocked to join them. The Jacobite army reached Derby, but the government armies were closing in and the Jacobites retreated. The cause was lost when the Jacobites were defeated at Culloden in April 1746. Panel stitched in Haddington by Kathleen Bain, Candy Richardson, Avis Moore, Marjory Smith, and Cindy Sykes.

Wilkie’s part was to organize the stitchers. She recalls, “It’s not all that easy to find embroiderers as it tends to be something that people do at home, so I contacted galleries and coffee shops and asked if they knew any stitchers in their area. Many of the volunteers who became involved weren’t even stitchers and had diverse interests, such as rowing groups, music groups, quilters, etc.” 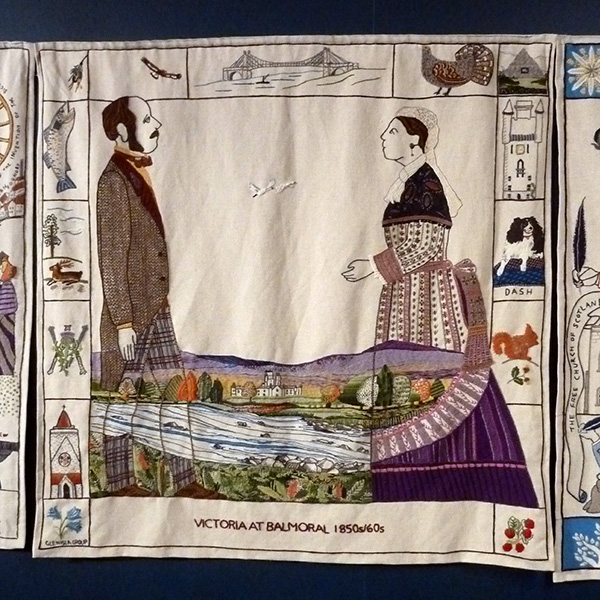 Unlike previous tapestries, such as the Prestonpans Tapestry and the Bayeux Tapestry, The Great Tapestry of Scotland is worked in a wide range of stitches and colors, which could have proved a challenge to the nonstitching volunteers. Wilkie remembers, “It was only through conversation that you knew if they were open to more complex stitching, although in practice, some people who had never even stitched before were happy to try out all sorts of stitches. The talent and creativity was a revelation.”

As each panel was drawn, the design was transferred onto the scoured linen and cotton background fabric that Wilkie sourced from Peter Greig & Company in Kirkcaldy. Wilkie continues, “I put together a stitching pack that included all of the threads for that panel. Most of the stitching would be worked in Appleton’s crewel wool, but we also used DMC stranded cottons.”

Each group had a leader who was a connection to Wilkie, but there was also a party so that stitchers could get together and swap ideas. “The exchange of ideas was incredibly useful as people would look at the ways other stitchers had worked different areas and the stitches that they had used, and it really inspired them,” Wilkie says. 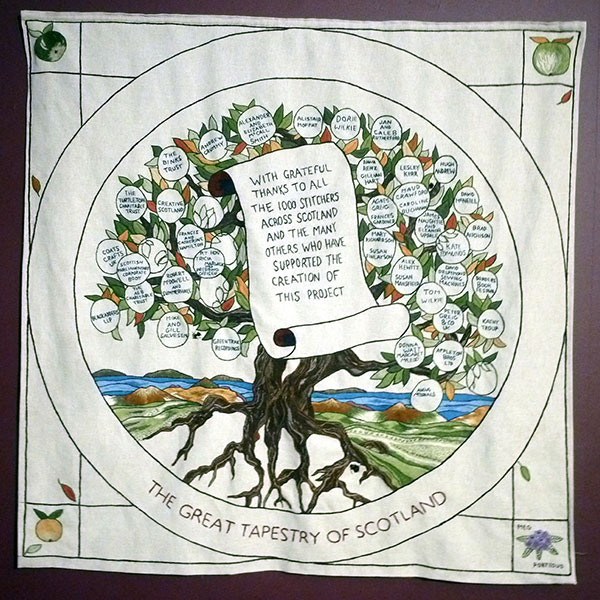 The “Tree of Thanks” panel from The Great Tapestry of Scotland. The final panel is a tribute to everyone involved in the creation of this amazing embroidered artwork.

Designing 160 panels was a huge undertaking and, at times, Wilkie was waiting for artist Crummy to complete the design for the next panel so that she could get the stitching pack together and send it out to the group who were hopefully waiting with needles poised.

Once the completed panels started to arrive back, they were blocked, stretching and wetting them to pull them into shape. The practicalities of packing, transporting, and displaying the panels was a key consideration of the finishing process. “Once a panel was stretched, it was backed with fabric and a wooden hanging baton. For storage and transporting, the panels are actually hung on frames in numerical order, which means that they don't have to be folded or rolled, which makes it so much easier to put up and take down an exhibition,” explains Wilkie. 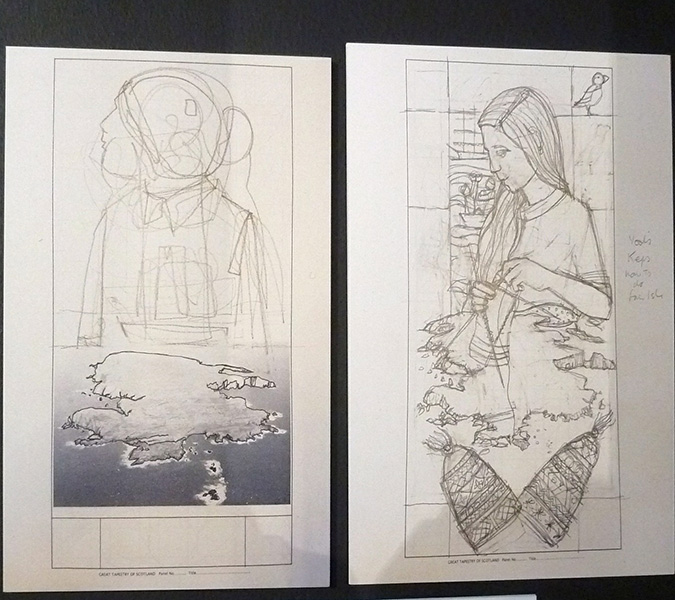 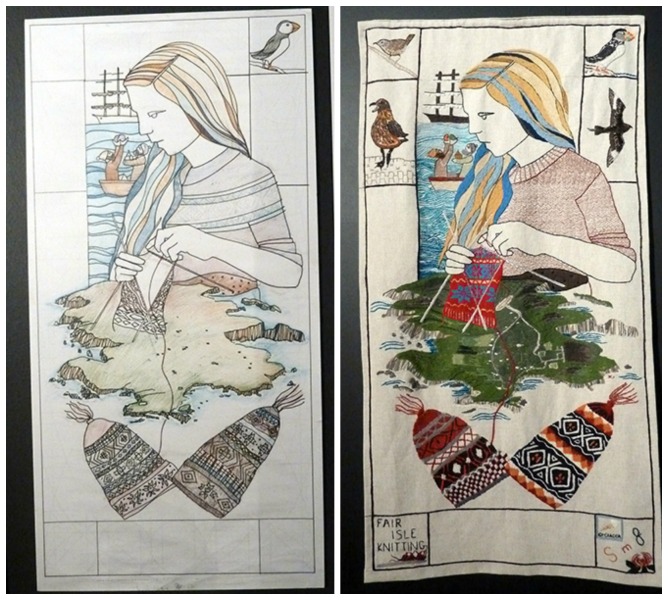 The “Fair Isle Knitting” panel from The Great Tapestry of Scotland; from left to right: artist Andrew Crummy’s initial sketch, his final illustration, and the stitched panel. The Fair Isle panel depicts a woman knitting the fine geometric designs for which the small sparsely populated island is famed. The stitchers were also knitters and they were determined that the panel should show both the back and front of the piece of knitting—but in embroidery. Panel stitched in Port Seton by Marietta di Ciacca, Edna Elliott-McColl, and Susan Finlayson.

Historic events are, of course, the focus of many panels, but literary giants such as Walter Scott and Robert Burns are there, too, along with scientists, archaeologists, comedians, Elvis landing at Prestwick airport, Dennis the Menace and Desperate Dan (both famous comic book characters in Scotland), and Sean Connery. But there was still scope for more personal input. The little square “tags” that finish the bottom corners of each panel represent the stitchers who embroidered it. Because so many of the panels were stitched in the geographical area that they are about, perhaps coincidences were inevitable. Wilkie shakes her head in amazement: “I was astonished to find that one of the stitchers on the panel that shows Robert the Bruce still lives on land gifted to her family by King Robert.” 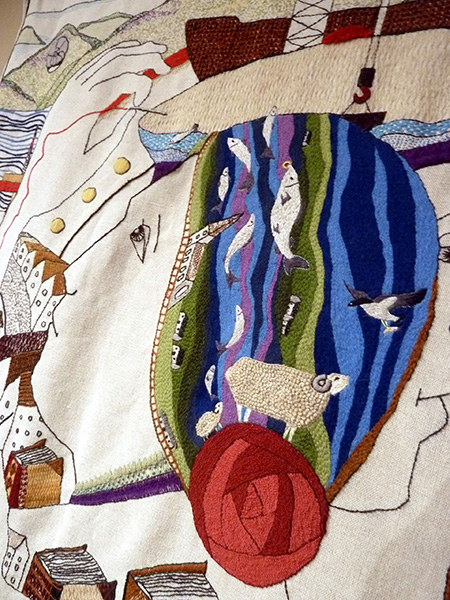 Detail of the first panel from The Great Tapestry of Scotland.

Yes, there are kings, literary giants, and pop stars in the panels, but for Wilkie the whole tapestry is really about the people, from the herring girls to tenement life and the miners’ strike. Of course, the stitchers are now part of that rich tapestry of life, too, and Wilkie is determined to record their stories. But in the meantime, she has become something of a celebrity and is now traveling to give talks to groups and at book festivals. Everyone wants to know the story of the making of The Great Tapestry of Scotland and the history of the nation captured in one great work of art.

P.S. I first met Dorie Wilkie when I wrote an article about the Prestonpans Tapestry for the United Kingdom needlework magazine that I was editing. When she asked me if I could provide the stitch diagrams and instructions that would be sent out with each stitching pack for The Great Tapestry of Scotland, I was more than happy to help. When I first saw the finished tapestry, I was thrilled and quite overcome to find my name stitched into the “Tree of Thanks” panel. It was a privilege and pleasure to be able to help.

Kathy Troup, born in the north of England, has lived in Scotland for many years. She edited a U.K.-published stitching magazine for seventeen years and continues to write about the subjects she loves.

For more from Kathy, read her post “Postcard from Scotland: Scottish Crewelwork from Glamis Castle.” For more on The Great Tapestry of Scotland, visit www.scotlandstapestry.com. Plus, try your hand at embroidery with our Embroidery eBook. Read the entire "Postcards from Scotland" series!

Featured Image: This panel incorporates details of many of the images shown in the panels. Panel stitched in Beith and Kilwinning by KA Two, Linda McClarkin, and Carol Whiteford. All photos by Kathy Troup.