Making Do: Memories of Mending

In the past, most needleworkers learned this craft at their mother’s side, but today this is rare. In the March/April 1997 issue of PieceWork, contributor Kax Wilson recalled her mother’s time spent mending during the early twentieth century.

Before the rise of fast fashion, savvy needleworkers made do and practiced the practical art of mending. In the past, most needleworkers learned this craft at their mother’s side, but today this is rare. In the March/April 1997 issue of PieceWork, contributor Kax Wilson recalled her mother’s time spent mending during the early twentieth century. Here’s Kax:

I was a child of the Great Depression and World War II, when mending and making do were common activities in many families. I remember going to school wearing outgrown dresses made wearable by letting down hems, the old fold lines covered with rows of rickrack. Most of my socks had darned heels or toes.

In those days, Mother spent her mornings on housework—washing on Monday, ironing on Tuesday, baking on Wednesday, cleaning on Thursday, shopping on Friday—the prescribed routine for a housewife then. Her afternoons were spent knitting, mending, and darning socks. In good weather, she would sit in a canvas lawn chair in the backyard and chitchat with her neighbor while she worked. In late afternoon, before she had to start dinner, she would sew or knit in the living room, absorbed in Stella Dallas or One Mans Family, radio soap operas of the 1940s. 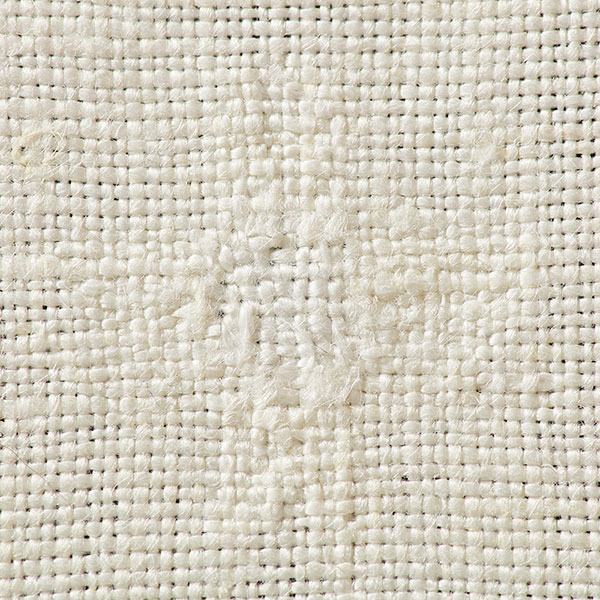 The invisible technique of linen darning is worked on the wrong side of the fabric by laying in a warp and weaving a plain-weave weft across. Photo by George Boe.

Mother's old sewing box is a tin treasure chest painted gold, now blackened with age. It came full of chocolates one Mother's Day. The box still holds a few balls of gray and tan darning cotton used in the pre-nylon days when the heels and toes of stockings and socks were extremely vulnerable. Once there was a good supply of embroidery floss in assorted colors, also handy for darning. The big red apple pincushion, with the little emery-filled strawberry attached, still holds some of the darning needles with the long eyes that are so easy to thread.

When I was a little girl, I liked to play with the assortment of hooks and eyes, buttons, snaps, elastic, braids, and odds and ends in the treasure chest. Once in a while, I was allowed to wear the gold thimble that had belonged to my great-grandmother. Most intriguing to me was the cobalt blue glass darning egg, a round ball 2 inches (5 cm) in diameter with a 4-inch (10-cm) handle shaped something like a baseball bat. I learned to insert it into my sock so that the holey place was stretched over the egg, but I was never able to weave the perfectly flat darns my mother made. Now I keep the egg on the front window ledge and don't even attempt to darn socks.

To read the rest of Kax Wilson;s article, download a copy of PieceWork’s March/April 1997 issue. Learn more about mending with reweaving in the blog post “Mending with Reweaving and Piece Weaving.” Plus, read about darning eggs in the January/February 2018 issue of PieceWork.