Looking for Perfect Buttons? Make Your Own

I first encountered Dorset buttons when reading Burning Bright, a Tracy Chevalier novel that follows a family of button-makers as they make a new life in London during the eighteenth century.

With fingers flying and knitting needles blazing, January has been a month of yarn immersion. I have been finishing a series of samples for my new workshops. While I love spinning and knitting cardigans that incorporate beautiful buttons, I used to struggle to find the right ones. Then I learned to make my own buttons—and you can, too!

I first encountered Dorset buttons when reading Burning Bright, a Tracy Chevalier novel that follows a family of button-makers as they make a new life in London during the eighteenth century. After reading further about the English button trade (1700s–1900s), I was giddy to see how it intersected with other authors I adore, such as Thomas Hardy and Jane Austen. My article in Jane Austen Knits 2013 follows the long history and quick, painful decline of the Dorset button trade. 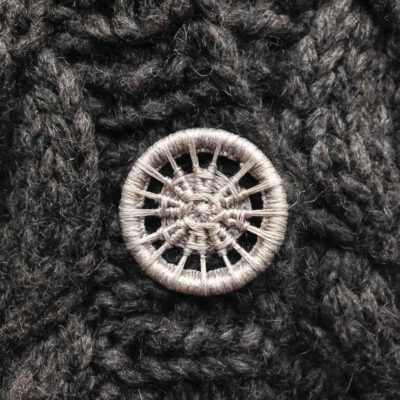 With only a few yards of yarn and a ring, you can create your own button.

There were a great many button patterns made in England, but the one that has become almost synonymous with Dorset button is often called the Blandford Cartwheel. (See the multicolored center button in the first image.) This is a very easy button to learn and can be easily adapted by incorporating additional colors, beads, textured yarns, and more.

You can see a Blandford Cartwheel tutorial in Jane Austen Knits 2013 or tutorials for several button types in my How to Make Dorset Buttons webinar.