How to Display (Most) Textiles Safely, Part 3

Learn the best practices of displaying textiles in shadow boxes.

In my past two posts, I’ve focused on displaying flat textiles on the wall, either with a hanging apparatus or framed. Sometimes, though, there are textiles we want to display that have more shape and form or that simply don’t fit well in a traditional frame. Think lace gloves or a beautiful tatted purse. In those cases a shadow-box setup can work beautifully.

Shadow boxes have the benefit of extra space to better showcase these more 3-dimensional textiles. They’re also nice if you want to include multiple items in one display—say a christening gown and baby shoes. That said, shadow boxes are not without their issues, and if a textile is extra delicate, it’s important to know how to display it safely.

First and foremost, it’s important to know whether your textile is strong and stable enough to display. If there’s any question at all about the possibility of damaging the textile, talk to a conservator or a collections or display professional at a local museum. Always exercise caution when dealing with antique and extra-delicate pieces and never hesitate to get a second opinion if you are at all worried.

Normally I like to talk about best practices, but this time I want to share a “what not to do” example. My husband’s family has lived in western Kansas for the better part of two centuries. His family’s history is intrinsically tied to the agriculture, and because of that, we have a number of family heirlooms that relate to the family farm: saddles, barbed wire, and, oddly enough, a pair of buffalo gloves. These gloves are well over a century old and have been passed down carefully through the generations.

At some point, a well-meaning relative put the gloves in a shadow-box display case. While the box itself is beautiful, there are a few problems with the current set up. First, the gloves are probably tacked to the back of the shadow box using metal pins or small nails. We live in a very dry climate, so it’s not as big of a deal, but these metal pieces can easily corrode and discolor and damage the gloves. Second, the gloves sit directly on a finished wood. What it’s finished with, I’m not sure, but the finish can potentially damage the gloves in two ways: by directly rubbing off onto the gloves—especially if the finish is affected by humidity—and through off-gassing. Finally, if any moisture were to get into the shadow box, it could create a perfect habitat for mold. 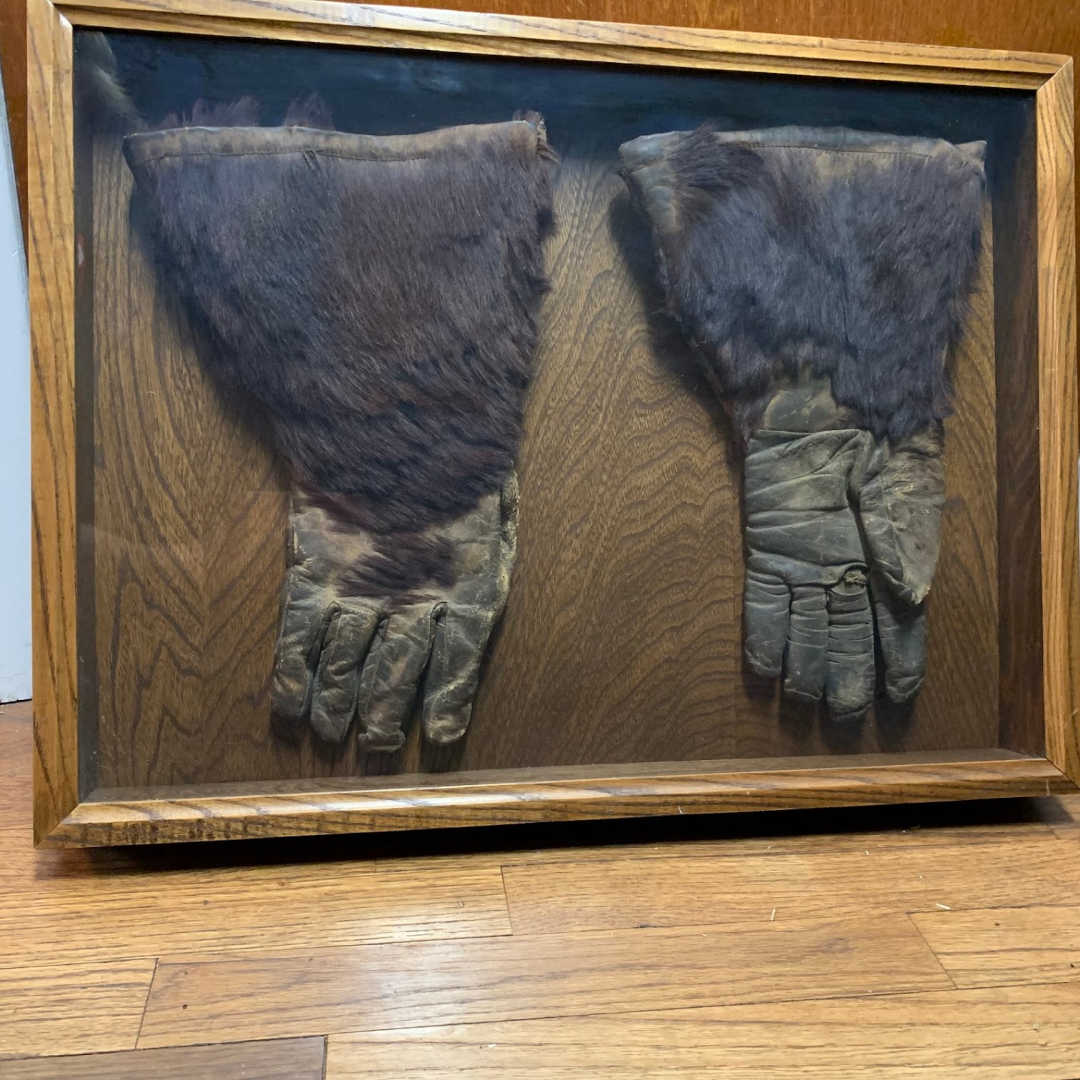 Were I to frame these gloves myself, I’d start by using a shadow box lined either with acid-free matboard or a white cotton or polyester fabric. Ideally if the latter is used, it should also have acid-free matboard behind it as a buffer between the back of the frame and the fabric.

Second, I’d make sure find a way to hang the gloves with something other than metal pins or nails. For actual cloth textiles, you can sew a cloth backing on the textile. This can either be a small strip of backing along the top of the textile that can then be affixed to the backing material of the shadow box with either hook and loop strips (if you’re using matboard) or with more sewing (if you have a cloth backing). If you’re using a cloth backing in the shadow box, you can also carefully sew the textile directly to that backing. (Both of these techniques are explained in my first two posts on displaying textiles, see Resources below.) For the buffalo gloves, I'd talk first to a conservator about whether sewing would damage the leather or whether there would be a better option for that particular material.

While looking at example shadow boxes elsewhere, I saw a few websites suggest using spray adhesive to adhere either the cloth backing to the shadown box or, and this makes me shudder, the actual displayable textile to the backing. Do not do this. Any sort of adhesive can damage and discolor textiles, potentially permanently. Some of the worst damage I've seen to otherwise lovingly displayed textiles has been from the use of tape and glue. Cotton or polyester sewing thread is much, much safer even if it is more work.

Finally, to help combat possible moisture damage, I’d make sure to put a couple small bags of silica gel in the frame. As long as these bags don’t come in direct contact with the textile, they will absorb potentially dangerous moisture. They do need to be replaced regularly, although the length of time each bag can be used depends on both average humidity and the size of the bag. So make sure whatever type of shadow box you use, whether it’s handcrafted out of wood or purchased from a craft store, that the box can be easily opened and resealed. (The box for the buffalo gloves, unfortunately, is not easily opened without damaging the wood.)

One last note on shadow boxes: if you’re displaying more than one item in a single shadow box, it’s important to make sure that the different items won’t harm one another with off-gassing or discoloring. If you’re not sure, talk to a conservator or a collections manager at a local museum.

Now that I’ve covered the primary methods of framing and hanging textiles, next time I’ll cover how to best determine where they should go in your home to keep them as safe as possible.