A Tribute to a Lace-Knitting Legend: Olga Alexandrovna Fedorova

Galina Khmeleva will remember the many months she spent under Olga Fedorova’s careful tutelage and watchful eyes while a guest in Olga’s home in Orenburg, Russia, perfecting her lace-knitting skills.

Olga Alexandrovna Fedorova in her apartment in Orenburg, Russia. Photographer unknown. 1995. Photograph courtesy of the author.

In 2008, I lost a dear friend. Olga Alexandrovna Fedorova (1935–2008) was also an adviser, a trusted confidante, and most of all, my mentor. Our relationship made the previously unthinkable possible: A window to the outside world was opened to me, allowing a woman from Leningrad to pursue a lifelong dream of learning about Orenburg lace knitting, and Olga’s life changed beyond her own imagination.

In 1955, Olga, barely out of her teens, went to work for her hometown village branch of the Kombinat (Orenburg [Russia] Regional Knitters’ Cooperative). Her village of Zhioltoie had a well-deserved reputation as the center for the finest-quality traditional gossamer shawls and scarves (see “Cobwebs from the Steppes: Russian Lace-Knitted Shawls” by Melanie Falick and “Orenburg Gossamer and Warm Shawls from Russia” by Galina A. Khmeleva and Carol Noble, PieceWork, May/June 1995 and September/October 2000, respectively). It was not long before Olga achieved almost cultlike status among Orenburg’s elite knitters. Her knitting was technically flawless, superior to the already high standards set by the Kombinat, while her handspinning prowess set her apart from even the legendary elder spinners of the community. In 1958, Olga won a top prize at a prestigious regional competition, and in recognition of her talents, she was made the chief designer and artistic director for the Kombinat. 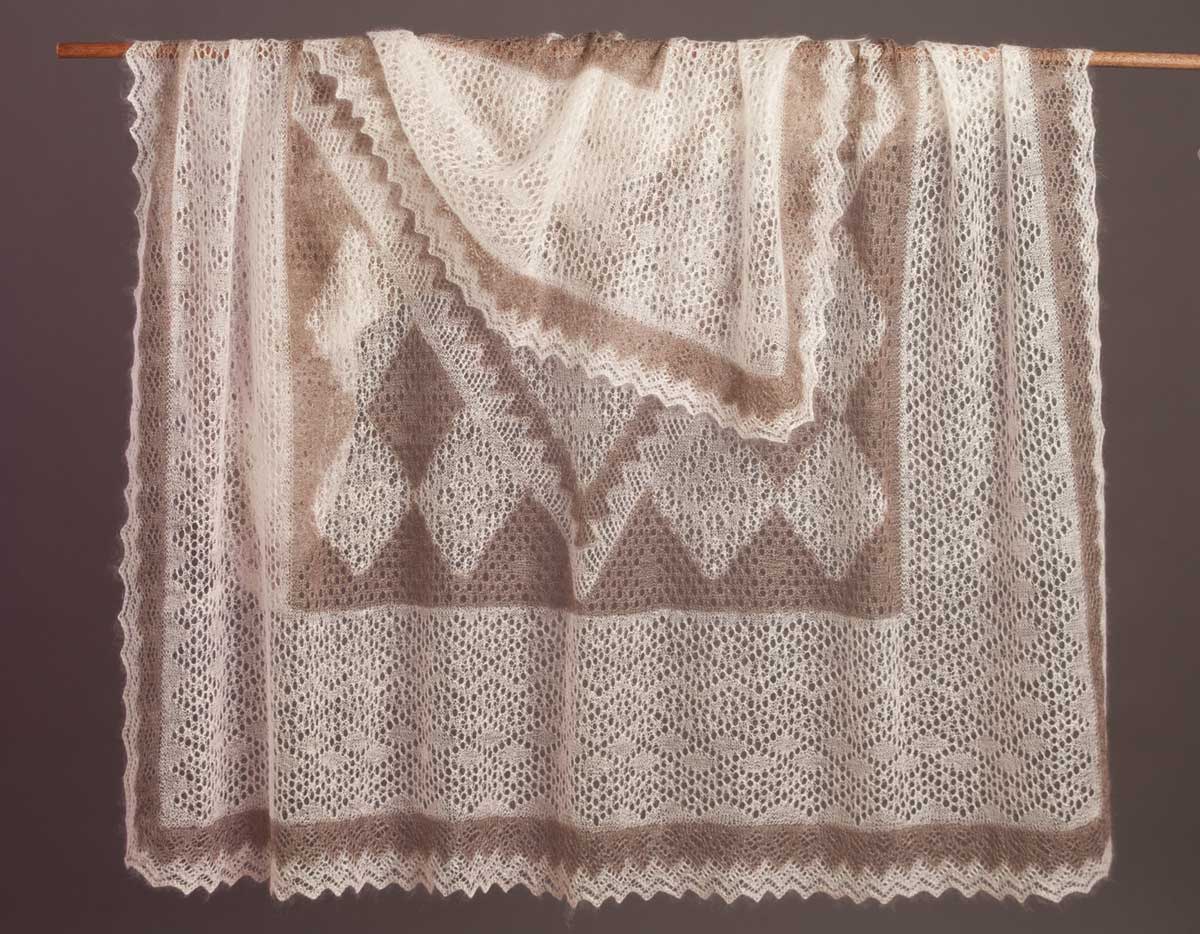 I first met Olga in 1991 during my initial visit to Orenburg, which is located in a remote area of south-eastern Russia in the foothills of the Ural Mountain range. I had been selected by the Association for International Practical Training to participate in an exchange program under the auspices of the United States Agency for International Development. It was an honor to be the first Russian-born woman to take part in this inaugural cultural exchange program with its mission of providing hands-on, real-world business experience to the participants by bringing them to the United States at six-month intervals over a period of three years. The staff of the City Museum in Orenburg arranged my first meeting with Olga Fedorova, the personification of the city’s “legend of the steppes,” Orenburg knitted lace. Soon after this initial meeting, Olga graciously agreed to become my mentor, and she relished the idea of passing on her immense knowledge of and proficiency in the art of making Orenburg lace.

Olga came to the United States in 1996 to accompany me on my first Orenburg Knitted Lace workshop tour, which culminated with our participation in SOAR (an annual retreat sponsored by Spin Off magazine, one of PieceWork’s sister publications). One could not imagine a more prolific lace-knitting ambassador, or one so obviously out of her element: Olga neither spoke nor understood a word of English, but the knitting bridged the communication gap; many American knitters learned that they spoke fluent knitting.

Following Olga’s return to Russia, a rekindled interest in Orenburg-style lace knitting, particularly outside the Orenburg region, led to new efforts within Russia in marketing and promoting this art form. Irina Bushukhina, principal historical researcher at the Orenburg Museum of Fine Arts, led the effort to publish two books: Orenburgskii Pukhovyi Platok [The Orenburg Down Shawl, Volume 1] (Orenburg, Russia: Dimur, 2005), a comprehensive history of the more than 200-year-old tradition of Orenburg lace knitting, and a complete catalog of the museum’s extensive lace collection (Orenburg, Russia: Dimur, 2007), which includes eleven of Olga’s original designs. Just before her death, Olga completed work on a book that includes, for the first time, her original lace patterns (publication forthcoming).

In addition to the Orenburg Museum of Fine Arts, Russian museums containing examples of Olga’s work include the State Historic Museum in Moscow, the State Russian Museum of Arts and Crafts in St. Petersburg, the City Museum in Orenburg, the Art Museum in Tomsk, and the Historic and Art Museum in Sergiyev Posad. Her work is also in several private collections in the United States and Europe. To this day, Olga Alexandrovna Fedorova is the only knitter ever awarded the title of People’s Artist of RSFSR (Russian Soviet Federal Socialist Republic).

I always will remember the many months I spent under Olga’s careful tutelage and watchful eyes while a guest in her home in Orenburg, perfecting my own lace-knitting skills. At the time, I wouldn't have thought it even remotely possible that I would someday be traveling from city to city, shore to shore, sharing that knowledge with American lace-knitting enthusiasts. Olga was tough, but you clearly understood that mediocrity just wouldn’t pass muster with this woman. She was determined to get the best out me, or rather, that I get the best out of myself.

Olga realized that without worldwide access to its techniques, Orenburg-style lace knitting would be writing its final chapter. Olga Alexandrovna Fedorova made sure that it did not happen. I am honored and will be forever grateful that she considered me a friend and allowed me to take part in her knitting journey. Olga will be dearly missed, but her enduring legacy of lace knitting lives on.

Galina A. Khmeleva, owner of Skaska Designs, is the coauthor of Gossamer Webs: The History and Techniques of Orenburg Lace Shawls (Loveland, Colorado: Interweave, 1998) and author of The Gossamer Webs Design Collection (Loveland, Colorado: Interweave, 2000). She has been teaching the art of Orenburg lacemaking to U.S. knitters since 1996. Visit her website at www.skaska.com.

This article was published in the May/June 2009 issue of PieceWork.