A Stitch in Time: Rice Stitch

A member of the cross stitch family, the rice stitch is not to be confused with another type of stitching.

Rice stitch is a fancy cousin of cross stitch. Which example is your favorite? Stitching and photos by Katrina King

The distinctively textured rice stitch is a member of the very large cross-stitch family, and it has numerous variations. Historically, this easy decorative stitch has been known as the cross corners cross stitch, boss, squared boss, or William and Mary stitch. Also, the name rice stitch refers to a specific stitch in knitting.

Some designers, as well as needlework authors, have mistakenly referred to the scattered seed stitch as a rice stitch, but this should correctly be called the rice grain stitch instead, as it resembles scattered rice grains on a surface.

The rice stitch often appeared on early American as well as sixteenth- and seventeenth-century English samplers and remains popular today on modern samplers and needlepoint projects. 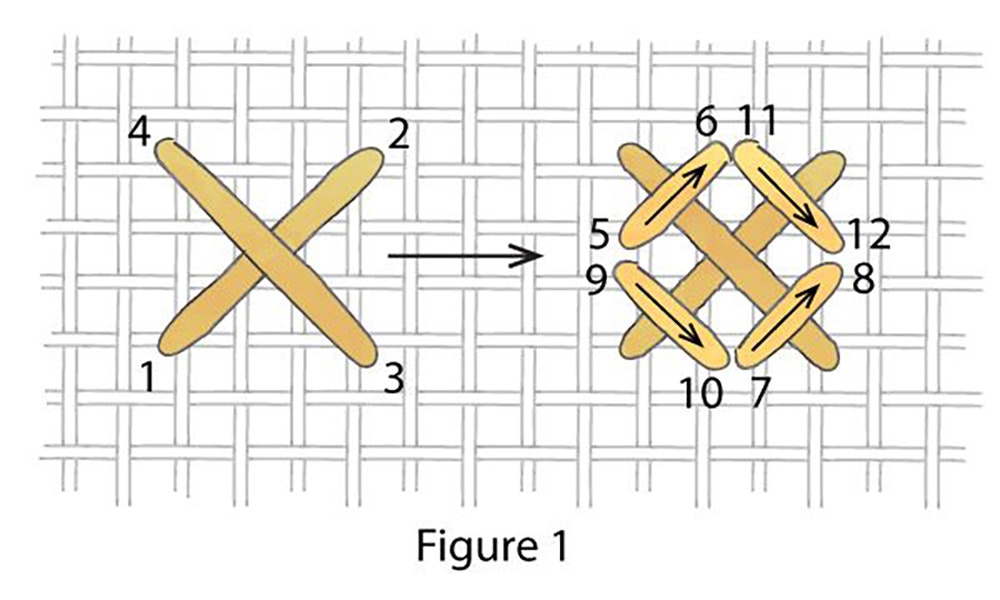 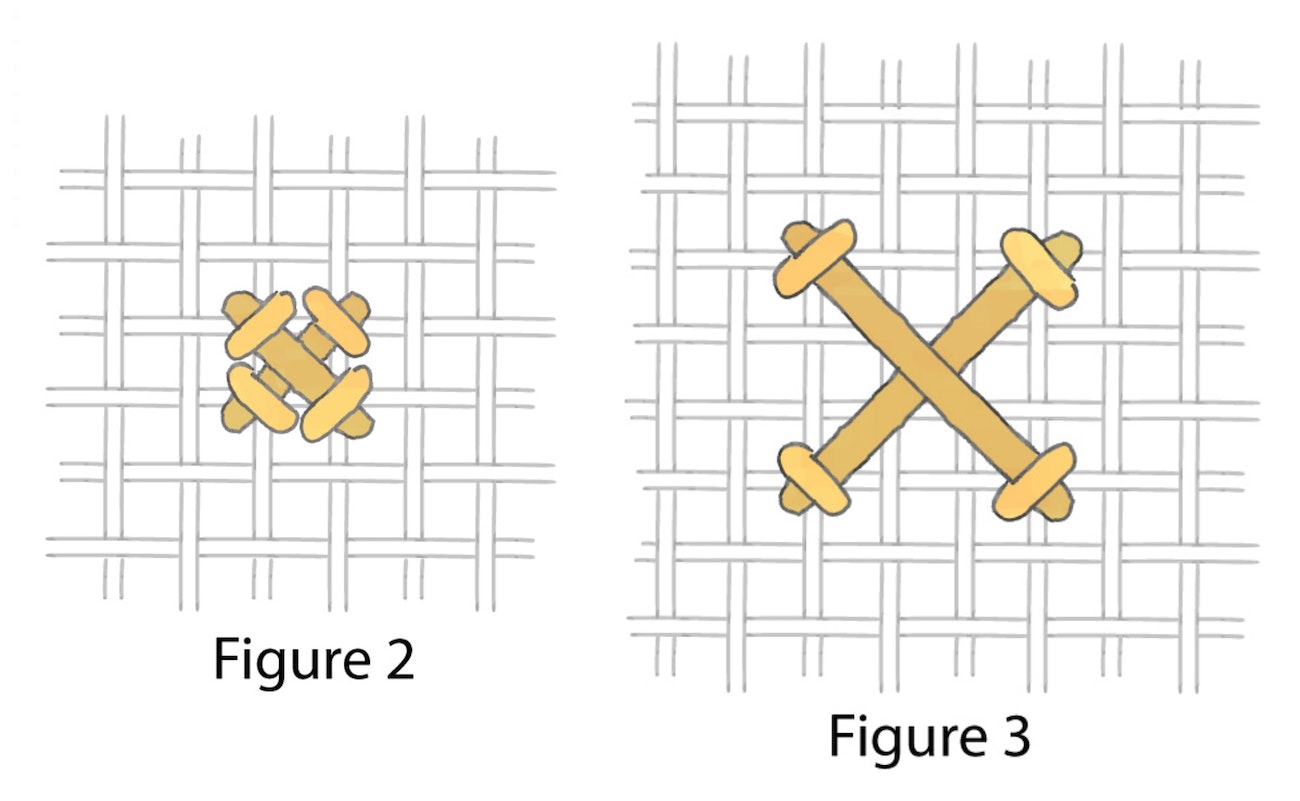 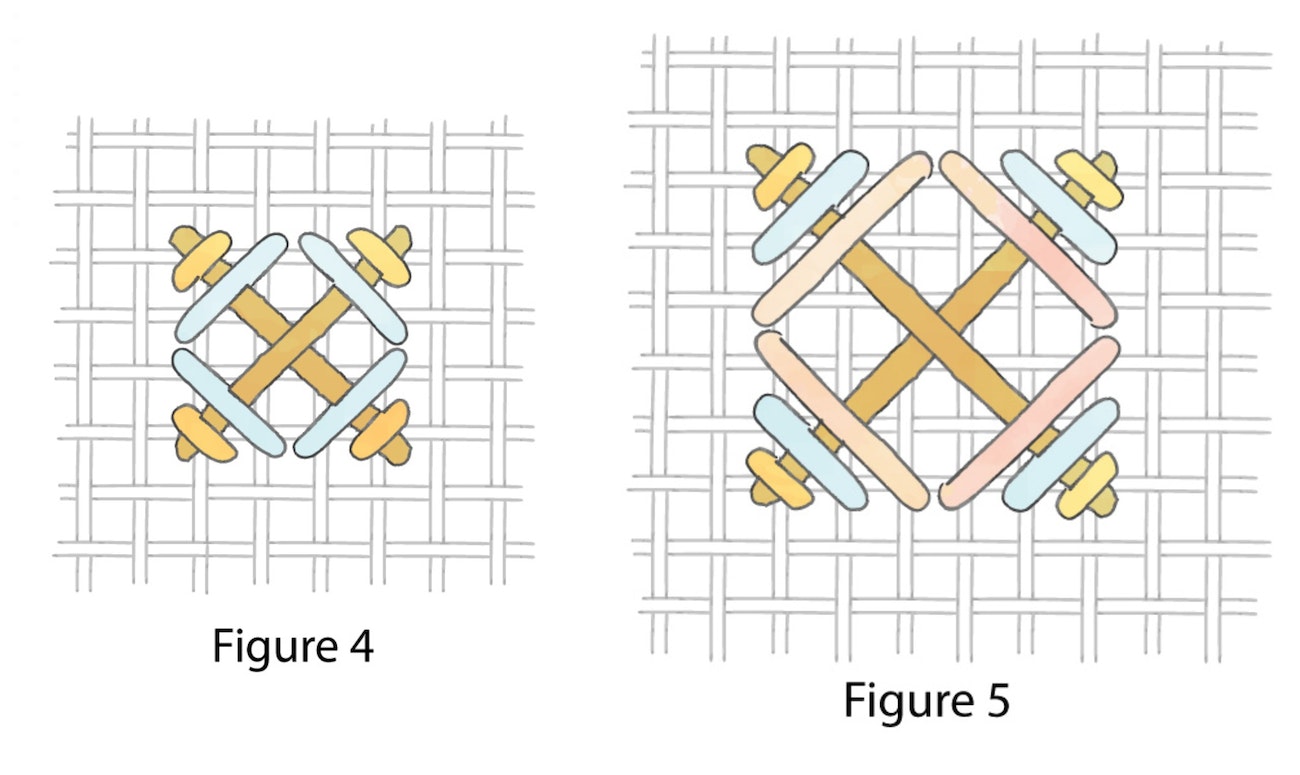 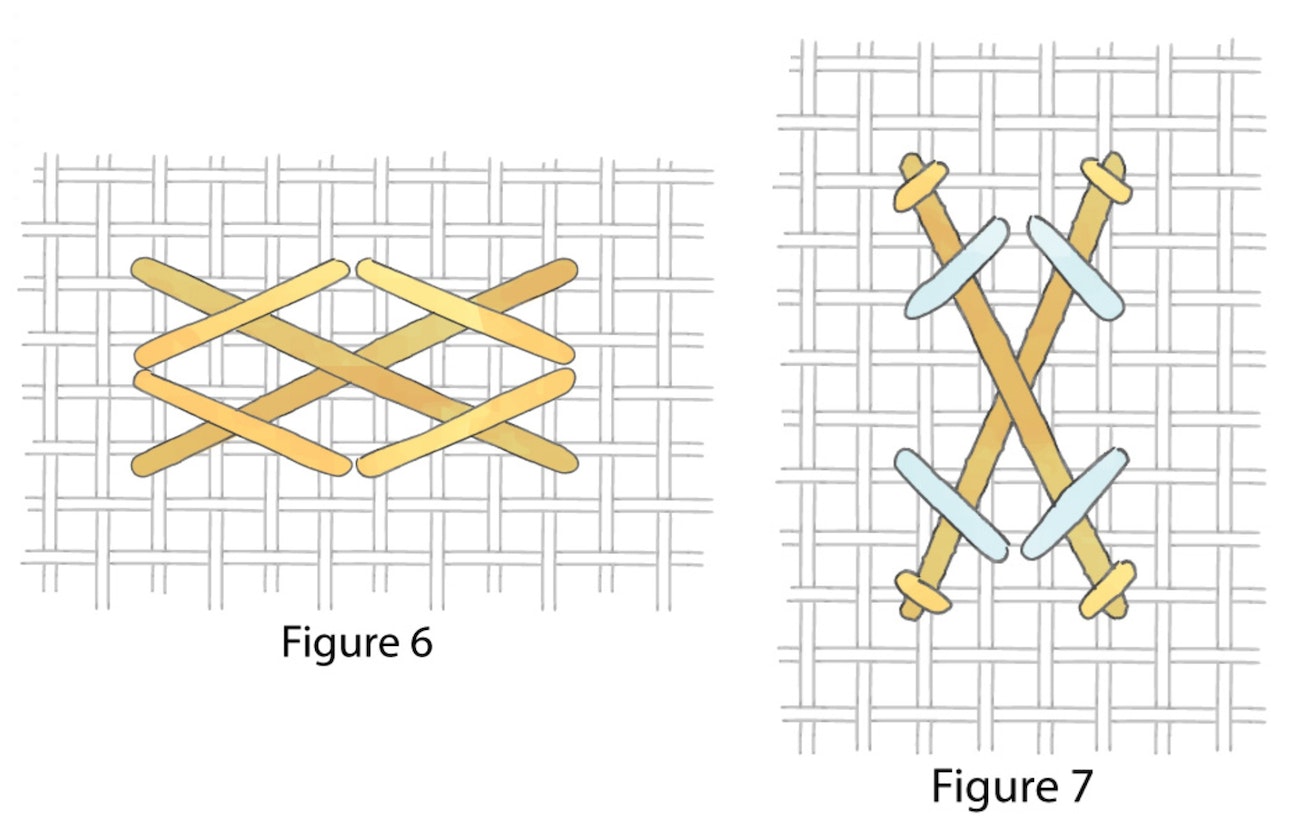 The base cross stitch may be worked in one color and/or one type of thread, and the top layer in another thread or color, which results in a multitude of different appearances and textures. The colors and thread types may be close in color, size, or texture or highly contrasted. A darker, thicker thread used for the cross-stitch component with a lighter colored, thinner thread for the top layer is one of the more pleasing combinations. This simple stitch is much easier worked on an even-weave fabric (linen, needlepoint canvas, or even plastic canvas); it has been sewn on plain fabric but with much less frequency and with less accuracy at keeping the stitch itself squared up. Adjust the thread and needle size to fit the background fabric. 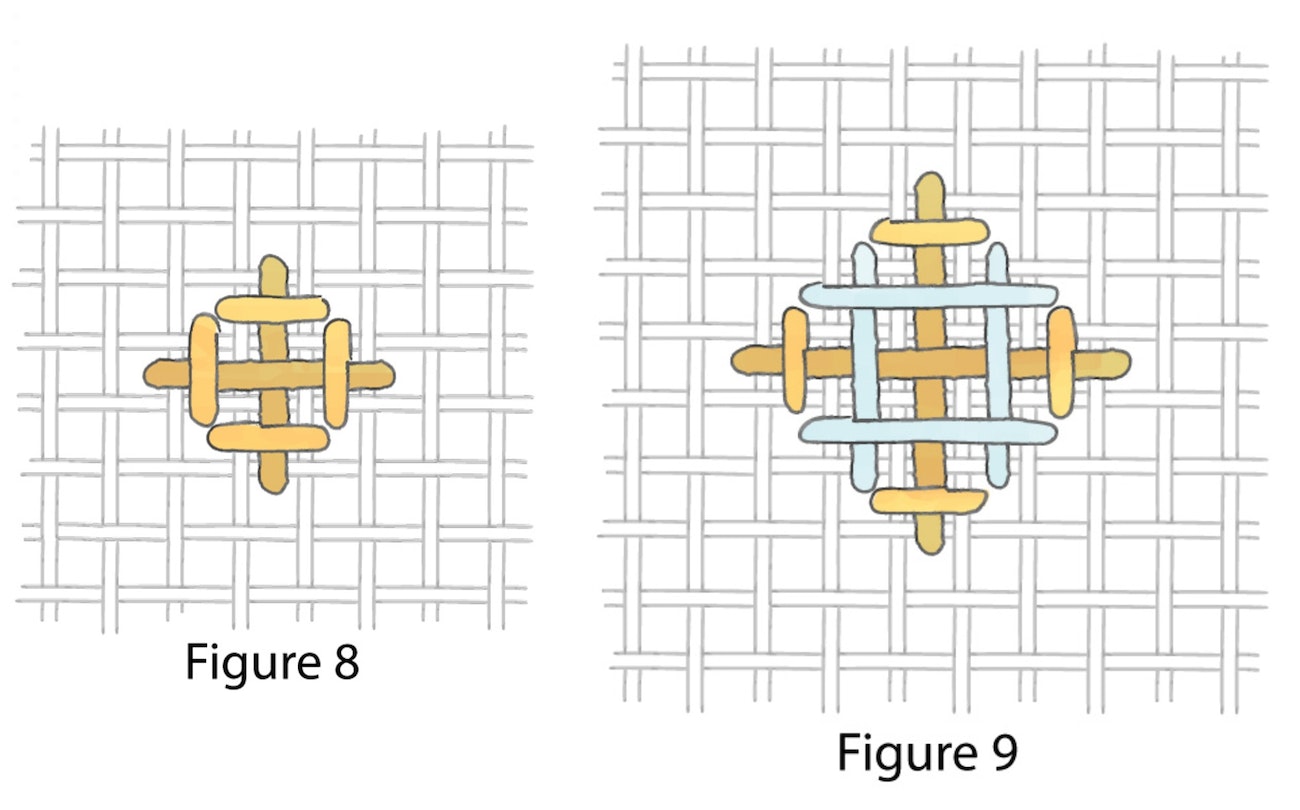 The rice stitch was and is used as a line, band, border, filling, background, or even as alphabet letters and numbers. Some students of the renowned Polly (Mary) Balch School (1785–1797) in Providence, Rhode Island, stitched a distinctive two-tone green border of rice stitches and with additional layout similarities that later allowed sampler scholar and author Betty Ring (Girlhood Embroidery: American Samplers & Pictorial Needlework, 1650–1850, Volumes 1 and 2, 1993) to identify and group these samplers as being from that particular school, designed by that particular instructress, and stitched by her students. 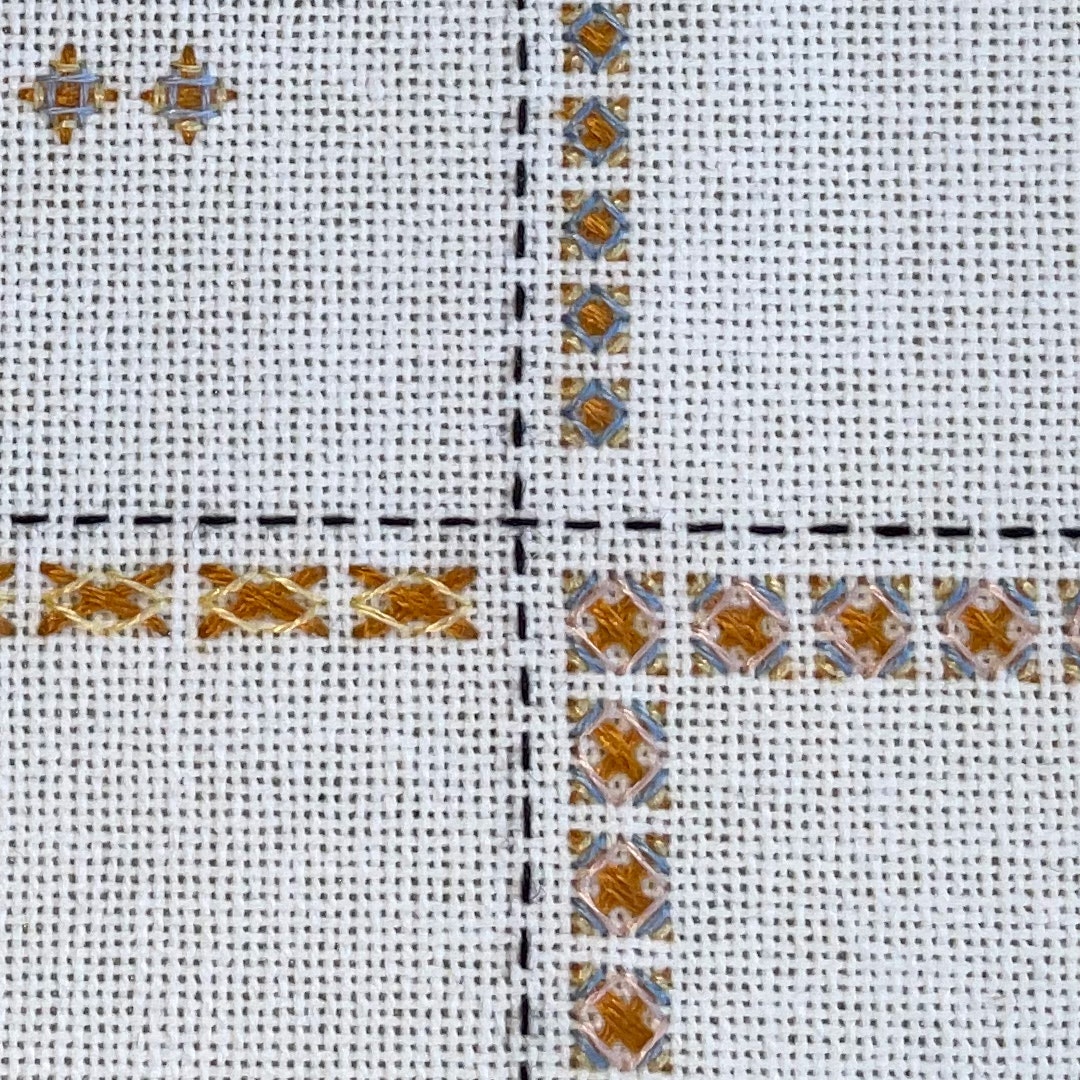 Layers of stitching give depth to the rice stitch variations. Clockwise from top left: Figures 9, 4, 5, 6