“You’ve Got to Really Like Your Job” Department Stores as Purveyors of Yarn and Knitting Knowledge, 1930–1960

American department stores served as social networks for knitters long before boutique yarn shops and the Internet. Established as grand emporiums and respectable shopping destinations, department stores flourished between 1890 and 1960. Most developed from peddler carts or drapers selling dry goods (textiles) and expanded to include many departments that sold furniture, books, jewelry, food, and more. During department store heydays, knitting instructors and buyers in needlework departments kept knitting needles busy and yarn flying out the doors. Who were these anonymous, unsung purveyors of knitting knowledge who worked tirelessly to sell yarn and promote knitting?

Names of stores and employees would remain lost to history without one periodical in particular, the Dry Goods Merchants Trade Journal (1903–1968).* The Journal dispatched teams of editors across the nation to interview department store employees and observe successful promotional strategies. Editors published lively reports in the Journal, including proven ways that needlework departments promoted knitting. The role of department stores in knitting history and tradition can be teased from reports by the Journal’s well-traveled editors.

Department stores capitalized on knitting’s soaring popularity during the Great Depression with free instruction from knitting experts. Knitting became one of the few Depression-resistant industries. At Zahn’s department store in Racine, Wisconsin, knitting instructor Mrs. S. Gluck created a social hub. She focused on novice knitters and found “great satisfaction to have bridge and poker friends drop these pleasures for the Knit Shop.” She also welcomed those who knitted “on a professional basis” for income. “Why not?” she asked. “I have one young man coming to my department who . . . has been earning money for his schooling by knitting for Racine women.” She noted a side benefit of the store’s no-smoking policy: smokers who first came to the shop often left several times each afternoon for a “few puffs,” but as they became more involved with knitting, they invariably forgot cigarettes (November 1934).

At the Emporium in Jackson, Mississippi, advertising manager Mr. Beacham considered knitting instructors the greatest single factor for success (March 1935). “She must have a fine personality and know the ins and outs of knitting thoroughly,” he stated. Needlework buyer Miss Bernice Facer at the W. H. Wright and Sons Company in Ogden, Utah, reported “nothing short of phenomenal” growth of 45 percent in four months, thanks to expert knitters. “Proper instruction is the big thing,” she reported. “When I started, I don’t believe there were four women in Ogden interested in knitting. But I attended the [yarn] manufacturer’s school, found out how to give instructions and interest immediately increased” (September 1935). 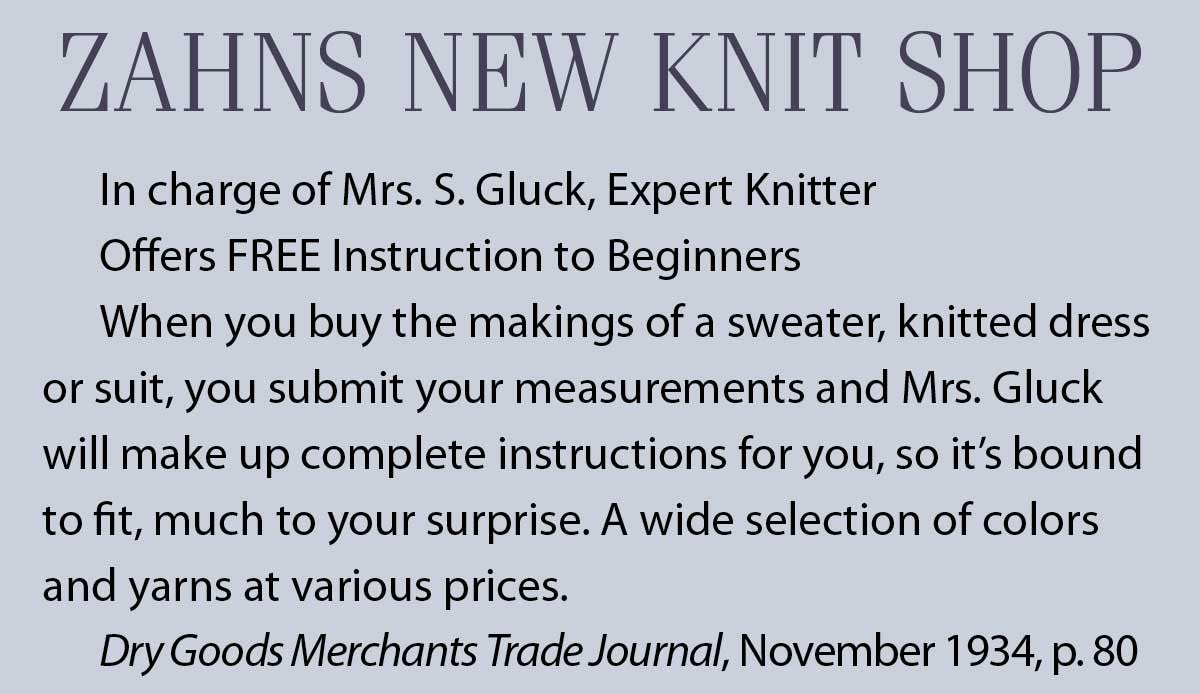 With knitting experts ensconced in needlework departments, stores across the nation created innovative sales and window displays that drew Depression-era knitters. “Clever psychology” at the Kresge department store in Newark, New Jersey, sold nearly 5,000 balls of yarn at 16 cents a ball, and a ban on mail-order sales and delivery forced customers into the store (March 1934). Prominent window displays of yarn and knitting also pulled in customers. At the J. L. Brandeis and Sons Company in Omaha, Nebraska, buyer Miss Lois Ferrin brought “melody” into her yarn displays. “The composer would not compose a piece of monotonous volume. . . . [H]is music, if good, contains many variations of stress. So should our displays be varied” (April 1937).

Contests proved especially attractive during Depression years. At Rhodes’ in Tacoma, Washington, art needlework buyer Miss Catherine Ewing personally recruited more than one hundred knitters to compete for prizes of (what else?) even more yarn, enough for the first-place winner to knit a dress (August 1936). In St. Louis, Missouri, the Globe-Democrat newspaper coordinated a contest among regional department stores that brought 698 finished sweaters, each donated to charity. Generous prizes included trips to Los Angeles (first place) and New Orleans (second place), a fur coat (third place), and so on down to patterns given to a total of 175 lucky winners (June 1937).

Department stores in military regions appealed to wives of service men, especially “prospective mothers” during World War II. The J. A. Kirven Company of Columbus, Georgia, launched publicity to convince women that knitting would offset layette shortages in baby departments and keep hands and minds busy. “Since the doctor said yes, your next step is Kirven’s knitting department . . . there to select the softest, loveliest yarn and begin knitting for the new arrival” (May 1944).

Department stores dedicated more space for knitting instruction and displays. At the Evansville Dry Goods Company in Evansville, Indiana, Mrs. Louise Bibb took charge of The Knitting Shop that occupied nearly one-fourth of a balcony overlooking all four sides of the main floor (February 1942). At P. A. Bergner’s in Peoria, Illinois, needlework buyer Miss Pittard instructed service wives with time on their hands, especially customers knitting for the Bundles for Britain and for the American troops. These knitters would continue knitting after the war, believed Miss Pittard. “Knowledge acquired is not soon forgotten” (November 1945). 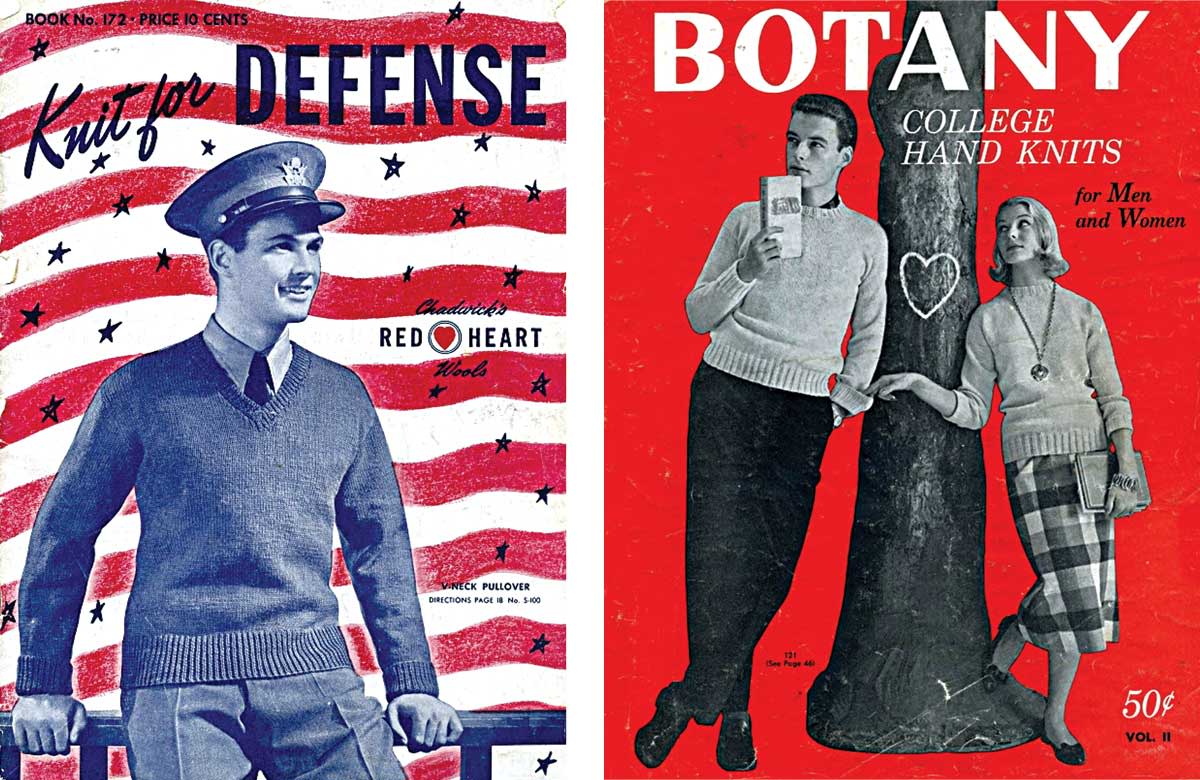 Department stores coped with yarn and other shortages during and after the war. At Barney’s in Schenectady, New York, buyer Mrs. Marion Dillard reported that the “response to just a small ad [for yarn] is terrific” (March 1946). Shortages of infants’ wear spelled opportunity, however, for entrepreneurial knitters at Ben F. Smith Dry Goods Company in Texarkana, Texas. Floor manager Mr. Paul D. Morris reported that “homemaker industrialists” knitted bibs, booties, and other layette items to fill gaps manufacturers could not supply. Customers bought yarn at retail price, and the store paid the knitter’s production price. On average a knitter earned a monthly income of $30 from the store (July 1946).

Strange as it may seem, men have been big boosters of the knitting trade. Returning veterans having been introduced to knitted items found in packages from home or from the Red Cross, are demanding that the woman of the house continue the good work. They want more of those knitted socks [and] sweaters. (March 1947)

Needlework departments wooed children and teenagers as prospective postwar knitters. At Stix, Baer and Fuller in St. Louis, Missouri, Mrs. Elmeda Brown instructed classes of forty to forty-five girls who came to the store to knit sweaters on Saturday mornings. “Of the children who began work on sweaters, 99 per cent of them completed the work,” she reported with justifiable pride (November 1945). The Emporium Department Store in St. Paul, Minnesota, reported “a fad started among teen-agers rolls up big sales” and pulled in teenagers with the theme “Knit that sweater!” (April 1946).

Free instruction lured young knitters into needlework departments. Mrs. E. Donald at Henshey’s in Santa Monica, California, established a knitting school in the needlework department for “the crowd of teen-agers always gathered here. The fad for couples wearing identical sweaters has added to the ranks of the younger knitters” (January 1947). At Lichtenstein’s in Corpus Christi, Texas, buyer Miss Mary Rankin found that her seventy youngsters in a summer knitting program became walking advertisements for the needlework department (May 1947).

Free expert knitting instruction supplemented with yarn manufacturers’ pattern books still proved the biggest draw. Petersen-Harned-Von Maur in Davenport, Iowa, employed a full-time instructor. “We have ladies who come in and say, ‘I must have something to do,’” explained buyer Mrs. Vivian Vinall. Instructors guided them. Instructor Mrs. Ada Clark at The Crescent in Spokane, Washington, described free lessons as their “biggest drawing card. . . . Many of the women come and stay all day” (August 1955). Perhaps the most dedicated instructor was Mrs. Alice McQueney, a twenty-year veteran knitting instructor at Hager and Brother in Lancaster, Pennsylvania. Any customer who became “hopelessly confused” could count on Mrs. McQueney to tuck the dress, stole, or whatever it may be into a box and take it home to work on. “You’ve got to really like your job,” said Mrs. McQueney (August 1955).

Otherwise lost to history, these anecdotal gems from the Dry Goods Merchants Trade Journal breathe life into the history of department stores as champions of yarn and knitting. In needlework departments across the nation, dedicated knitting instructors and innovative buyers sold yarn, inspired knitters, and kept alive knitting knowledge through extraordinary times.

Susan Strawn knits from the past, especially from cultural and historical traditions found in vintage patterns and handknits. She is professor emerita of apparel design and merchandising at Dominican University (Chicago) and author of Knitting America: A Glorious History from Warm Socks to High Art (Voyageur, 2007).