In the vein of "no idle hands," children took up needles, knitting everything from simple projects to socks, to aid soldiers during the Civil War.

The sewing circles, church groups, and town societies quickly recruited to provide aid to soldiers at the beginning of the Civil War (1861–1865) (see “Busy Fingers: Knitting Stockings in the Civil War,” page 8) soon inspired the founding of “juvenile societies” by and for younger charity knitters and stitchers. Anne L. Macdonald in No Idle Hands: The Social History of American Knitting relates that Northern Ohio Juvenile Societies “caught the spirit of good works . . . and sent in many a neatly packed box or a snug parcel.” Students at Brooklyn’s Public School No. 13 knitted socks. In Philadelphia, schoolchildren so neglected their studies to complete their projects for a fund-raising fair that the school’s Board of Control canceled their examinations. “Ten little girls, whose united ages were just one hundred years . . . came [from a children’s fund-raising fair to a general fund-raiser] to bring the proceeds, $16.50 apiece. There are doubtless ten millionaires in the land who have not done as much in proportion, though they may have given thousands.” The Young Ladies’ Knitting Society and the Juvenile Knitting Society of North Carolina, whose members ranged in age from ten to thirteen, knitted “with a vengeance” and created hundreds of pairs of socks, mufflers, and wristlets.

Children who were just learning to knit were given simpler projects, while the more advanced knitters made what was in greatest need, socks. Those who hadn’t yet mastered turning the heels would knit the tubular legs and feet and let a more skilled knitter tackle the heels. Local newspapers proudly reported the contributions of children in special donation columns: “From Miss Maggie Horlbeck, six pairs of socks knit by her two little maids ten years old.”

Reading aloud to the young knitters was not only entertaining but also could be educational. Some children could read and knit at the same time, even by candlelight. Even little boys learned to knit, and rare was the household whose evening routine was not accompanied by the clicking of knitting needles with, as one woman quoted by Macdonald said, “the everlasting sock dangling below.” One sock per day, three pairs per week, or, for some less experienced knitters, one pair per fortnight—whatever the goal might be, young American children were busy at their needles.

Louisa May Alcott (1832–1888) introduces readers to the March sisters’ charity knitting in the first pages of Little Women (1868). Jo March, unable to join their father, a chaplain in the Union army, and furious that she can “only stay at home and knit” shakes her blue army sock-in-progress until “the needles rattled like castanets, and her ball bounded across the room.” Her sister Beth uses her own unfinished sock to wipe away her tears that flow as Marmee (Mother) reads Father’s poignant letter from the front, then, understanding how she can help the war effort, Beth “began to knit with all her might, losing no time in the duty that lay nearest to her.” 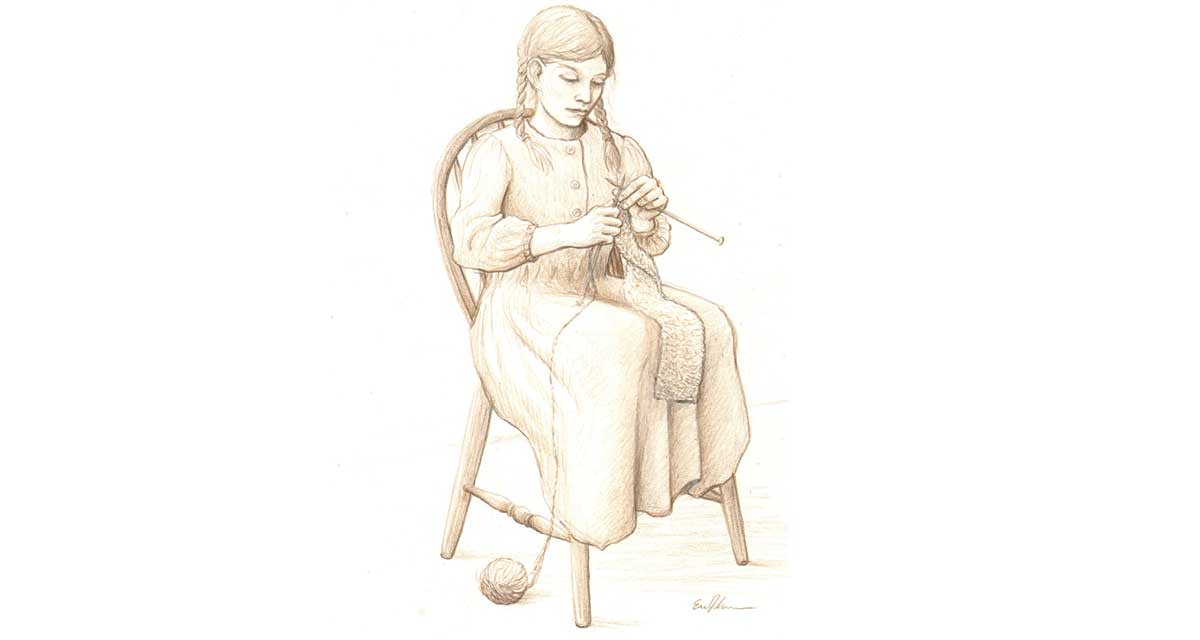 Later in the novel, the girls are outside. One sister is sewing, another is collecting hemlock cones, the third is sketching, and Jo is reading aloud to them all while knitting a sock. The neighbor boy, Laurie, arrives and is asked to finish reading the story while Jo “sets her heel.” He obliges and is in turn instructed in the ways of the girls’ “Busy Bee Society.” As he is about to leave, Jo offers to teach him to knit as there is “a demand for socks just now.”

Unlike her characters, who can only help the war effort from afar, Alcott herself, at the age of thirty, applied to be a Civil War nurse. Arriving at the Union Hotel Hospital, a former hotel in Washington, D. C., in December 1862, just before the Battle of Fredericksburg, she was assigned to help the head nurse, Hannah Ropes, who had begun working there herself only five months before. In Ropes’s journal of her time in the hospital, she wrote: “We are cheered by the arrival of Miss Alcott from Concord [Massachusetts]—the prospect of a really good nurse, a gentlewoman who can do more than merely keep the patients from falling out of bed, as some of them seem to consider the whole duty of a nurse.” Under Ropes’s patient, thoughtful, and selfless guidance, Alcott found herself fighting on the front lines of the battles of disease, infection, and fever.

Nurses were the last hope of soldiers confined to ill-equipped and often unsanitary hospitals; twice as many Civil War soldiers died of disease as from their injuries. In her own journal, Alcott writes: “The hall was full of these wrecks of humanity . . . and, in the midst of it all, the matron’s motherly face brought more comfort to many a poor soul, than the cordial draughts she administered, or the cheery words that welcomed all, making of the hospital a home.” Alcott immediately was put in charge of a forty-bed ward; duties included washing, bandaging, feeding, and providing medicine to her patients, most of whom suffered from pneumonia, diphtheria, and/or typhoid. She also made beds, dressed wounds, and assisted the surgeons. It was a grueling, overwhelming, and daunting responsibility to guide and console suffering soldiers and to comfort them as they died.

Six weeks after Alcott’s arrival at the hospital, Ropes wrote: “Miss Alcott and I worked together over four dying men and saved all but one, the finest of the four, but whether due to our sympathy for the poor fellows, or we took cold, I know not, but we both have pneumonia and have suffered terribly. She is a splendid young woman.” Ropes died of her illness within days; Alcott had to be evacuated to Concord, her health permanently broken. She suffered off and on from headaches, exhaustion, dizziness, and pain for the rest of her life.

Alcott’s weekly letters home, which had been published in the antislavery periodical Boston Commonwealth and read by the families of soldiers throughout the country, became Hospital Sketches, her first successful book. The publisher donated a portion of the sales to the children of Civil War casualties. Five years later, using characters loosely based on her parents and three sisters but setting the story during the Civil War years, Alcott began what would become her best-loved book, LittleWomen.

The United States Sanitary Commission was a private volunteer relief agency founded in June 1861, at the beginning of the Civil War, and based on a similar organization that the British had operated during the Crimean War (1853–1856). Though its directors were men, most of its volunteers were women. The Commission established innumerable charity knitting groups and soldiers’ aid societies to provide stockings, bandages, and other supplies, and coordinated their distribution to Union soldiers. It raised thousands of dollars in larger cities through Sanitary Fairs that featured parades, exhibitions, amusements, and markets. It recruited women to be nurses, including Louisa May Alcott, and worked to improve sanitary conditions in hospitals and soldiers’ camps. It opened soldiers’ homes for soldiers on sick leave or furlough and helped soldiers after the war to obtain back pay and pensions. The Commission was disbanded in 1866.

Joanna Johnson is the owner of Slate Falls Press, which she operates with her husband, Eric, in Loveland, Colorado. Together they publish knitting storybooks and literary pattern collections, including Little Women Knits. Find their books at www.slatefallspress.com.

This article was published in Knitting Traditions Fall 2012.