Let Us Keep Knitting and Crocheting for the Bazar, Sisters!

The “suffragists of the country, the home wreckers, the unsexed, the women who have lost all feminine instincts, are hard at work dressing dolls, fashioning baby clothes, embroidering doilies, painting calendars, crocheting and knitting.” —The Sun

A political cartoon titled 'An Inauguration of the Future' shows the effects of the women's suffrage movement, which include a female president, female soldiers and military commanders, and a man carrying a crying baby, 1897. (Photo by Stock Montage/Getty Images)

The “suffragists of the country, the home wreckers, the unsexed, the women who have lost all feminine instincts,” expounded the New York newspaper The Sun, “are hard at work dressing dolls, fashioning baby clothes, embroidering doilies, painting calendars, crocheting and knitting” for a national fair to raise funds for women’s suffrage. As stated by New York's The Sun newspaper:

The best joke of all is that the editor of the oldest and largest suffrage paper in the country keeps a pile of wash-cloths beside her, and in the intervals between writing editorials she crochets a fancy edge on them. Unperturbed, that editor, Alice Stone Blackwell, reprinted the criticism in The Woman’s Column in the September 8, 1900, edition beneath the headline “Knitting Versus Tobacco.” The anti-suffragist argument was that the suffragists were doomed to failure because they filled their idle moments with needlework. 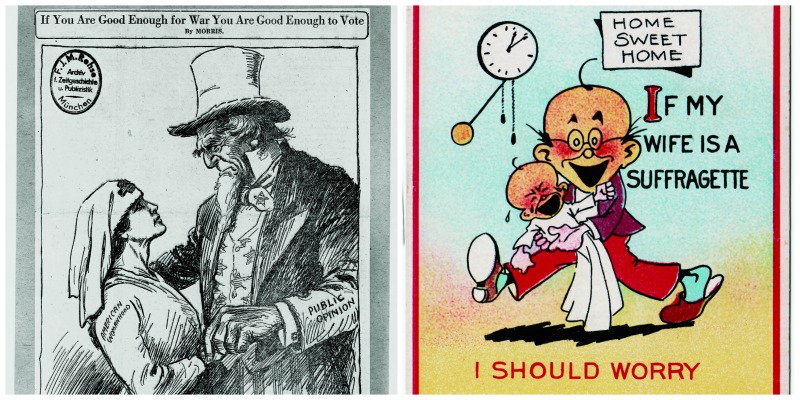 Political cartoons both promoted women’s suffrage and ridiculed it. On the left, Uncle Sam supports the idea of votes for women in a cartoon around 1899 (photo by Library of Congress/Corbis/VCG via Getty Images); on the right, a cartoon from 1900 warned that men would have to stay home with their children if women got the vote (photo by Ken Florey Suffrage Collection/Gado/Getty Images).

The article from The Sun continued: “A man who edits a newspaper edits a newspaper. Between writing editorials he smokes his pipe. . . . The woman editor crochets edges on wash-cloths! Of course this is one instance only, but I see similarities all through business life. . . . The truth is wash-cloths in the process of making have no place in newspaper offices. And until a woman learns the fit place for everything and then puts the things she has charge of in those fit places, she is not fit for any particular place.”

Blackwell responded, “[T]he writer does not seem to realize that a woman editor may find as much real relaxation in plying her knitting needles as any male editor finds in smoking his pipe.” She urged her readers: “[L]et us all keep on knitting and crocheting for the Bazar, sisters!” 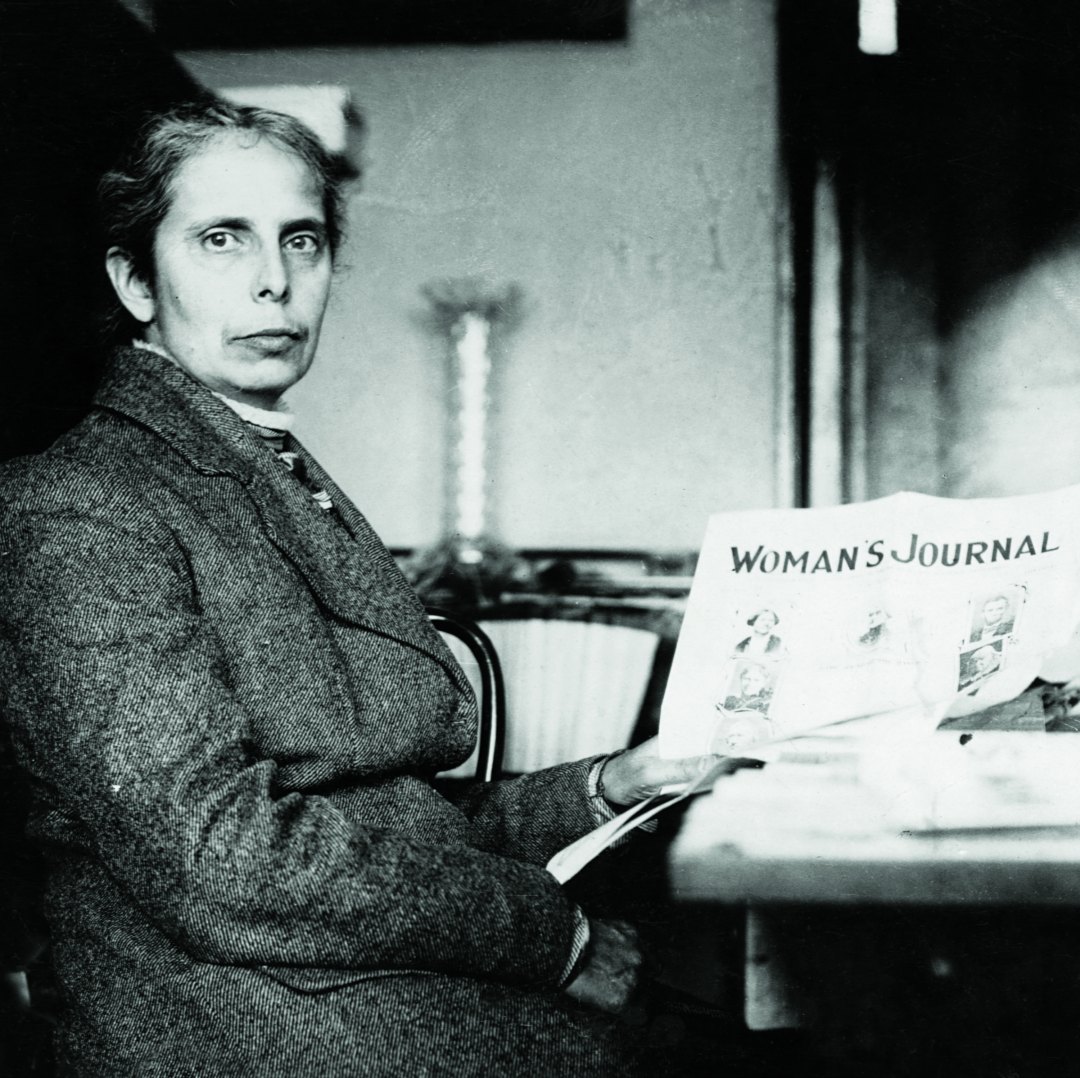 The National Suffrage Bazar at New York City’s Madison Square Garden was the first major project of Carrie Chapman Catt, newly appointed by 80-year- old Susan B. Anthony as leader of the National American Woman Suffrage Association (NAWSA). Modeling their efforts after the successful suffrage fairs held in Massachusetts since 1870, organizers of the fair called for participation from every state in the union, seeking “all sorts of saleable things.” Donations poured in from across the country.

Some donations were extraordinary for their value, novelty, or size. Rudolph Blankenburg, a textiles manufacturer and future progressive mayor of Philadelphia, donated a hanging of oriental embroidery. Laura Clay, president of the Equal Rights Association of Kentucky, promised a hog (to be sold locally, with the money from the sale forwarded to NAWSA). Clay’s gift inspired the donation by Iowa suffragists of a railroad carload of hogs to be shipped to Chicago and sold at the stockyards. A donkey was to be sent by express from New Mexico Territory to New York. And Mr. A. L. Barber and his wife, Julia Langdon Barber, donated a Locomobile, “one of the most expensive and elegant automobiles manufactured in the United States,” which became a popular ride around the event hall for Mrs. Catt and “a load of smiling suffragists.” 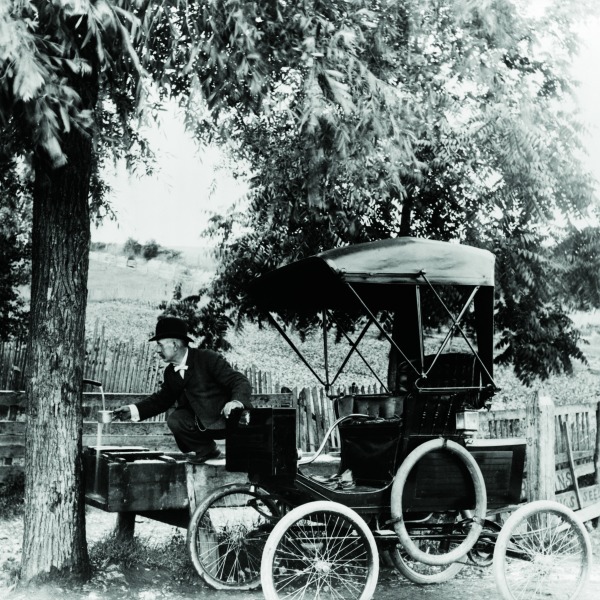 A steam-driven Locomobile in 1905, similar to the one donated to the National Suffrage Fair. Photo by Bettmann/Getty Images.

Katherine Durack is a Cincinnati crochet designer and author of award-winning articles on technical documentation and household technology. After 15 years at Miami University, Katherine founded Patterns for Success to pursue teaching, writing, and crochet design. Katherine creates patterns for original designs inspired by real people and events. You can follow her exploration of the intriguing parallels between the 19th-century women’s suffrage movement and the evolution of modern crochet on her Moral Fiber blog at WordPress or on Ravelry (patterns4success).

This article was published in Knitting Traditions 2018!