Mimi Seyferth designed her functional soldiers’ socks after ones from a Greek flyer and added an elegant meander design.

In the article “The Women of Pindos,” which was featured in the January/February 2016 issue of PieceWork, Mimi Seyferth tells the story of the role the women of Pindos played in the Greek war effort during World War II (1939–1945). She designed her functional soldiers’ socks after ones from a Greek flyer and added an elegant meander design. Here’s Mimi to explain:

After a friend first told me the story of the Women of Pindos, I immediately looked for more information about their exploits. I discovered a blog (www.greek-war-equipment.blogspot.com/2011/12/1940-41-women-of-pindos.html) that included a copy of a flyer, originally published on January 19, 1941, in the Greek newspaper To Έλεύθερον Βήμα [The Free Forum], offering knitting designs for accessories that the Greek army’s General Headquarters deemed suitable for Greek soldiers. The flyer, entitled “Τα Πλεκτα Δια Τον Στρατο” [Knitting for the Army] shows three knitted items: a sock, a gaiter (a leg warmer in the form of a long tube with ribbed cuffs at each end), and a shooter’s mitten. 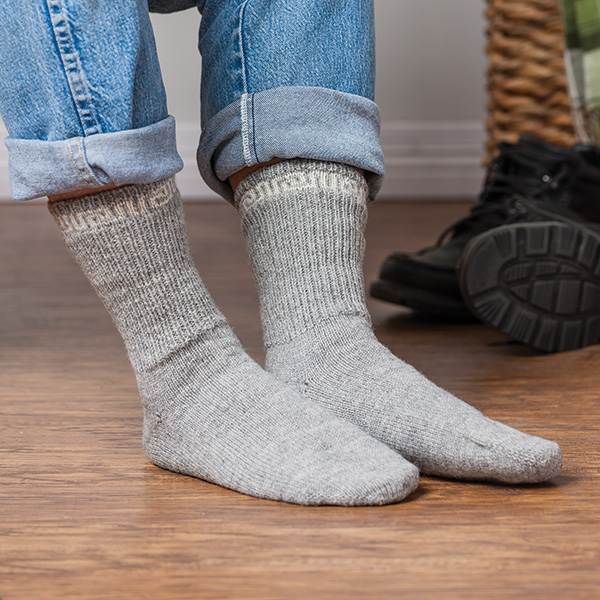 Mimi Seyferth used an actual pattern in a Greek 1941 “Knitting for the Army” flyer as the design inspiration for her “Women of Pindos Soldiers’ Socks.” Photo by Joe Coca.

I used the diagram of the sock on the flyer as my design inspiration. The diagram shows a plain sock, which seems to be knitted from the toe up with a short-row heel. The foot of the sock appears to be in stockinette stitch, and the leg of the sock appears to be in simple ribbing. Although the sock pictured in the flyer does not reflect any decoration, I took the liberty of embellishing the cuffs of these socks with a Greek meander design based on a pattern I found in a British Museum publication.

Mimi Seyferth is a philhellene; her heart belongs to Greece. She would like to thank Maria T. for first telling her the story of the women of Pindos; Georgia and Kostas Labrou, whose generous hospitality made it possible for her to research this article in Athens; Rupert Smith, who facilitated her research for this article in Ioannina; Gilda Vretea Kornhauser, who provided invaluable assistance in translating Greek sources; and Meropi Athanasiou, who deciphered the flyer with knitting designs that inspired the companion project for this article.

Download a copy of the January/February 2016 issue of PieceWork to knit a pair of your own soldier’s socks and read more about the wartime efforts of the women of Pindos. Plus, find patterns for socks and mittens from around the world in “Discover Knitted Mittens and Socks from Around the World from PieceWork.”