A Victorian Short-Row Course from Weldon's

For knitwear designer Vicki Square, the illustrations in Weldon’s Practical Needlework provide a great source of enjoyment and inspiration.

The illustrations in Weldon’s Practical Needlework are a great source of enjoyment and inspiration. I particularly like perusing the images because of the very fine detail and the ideas they generate which may not have anything to do at all with the project in the illustration. 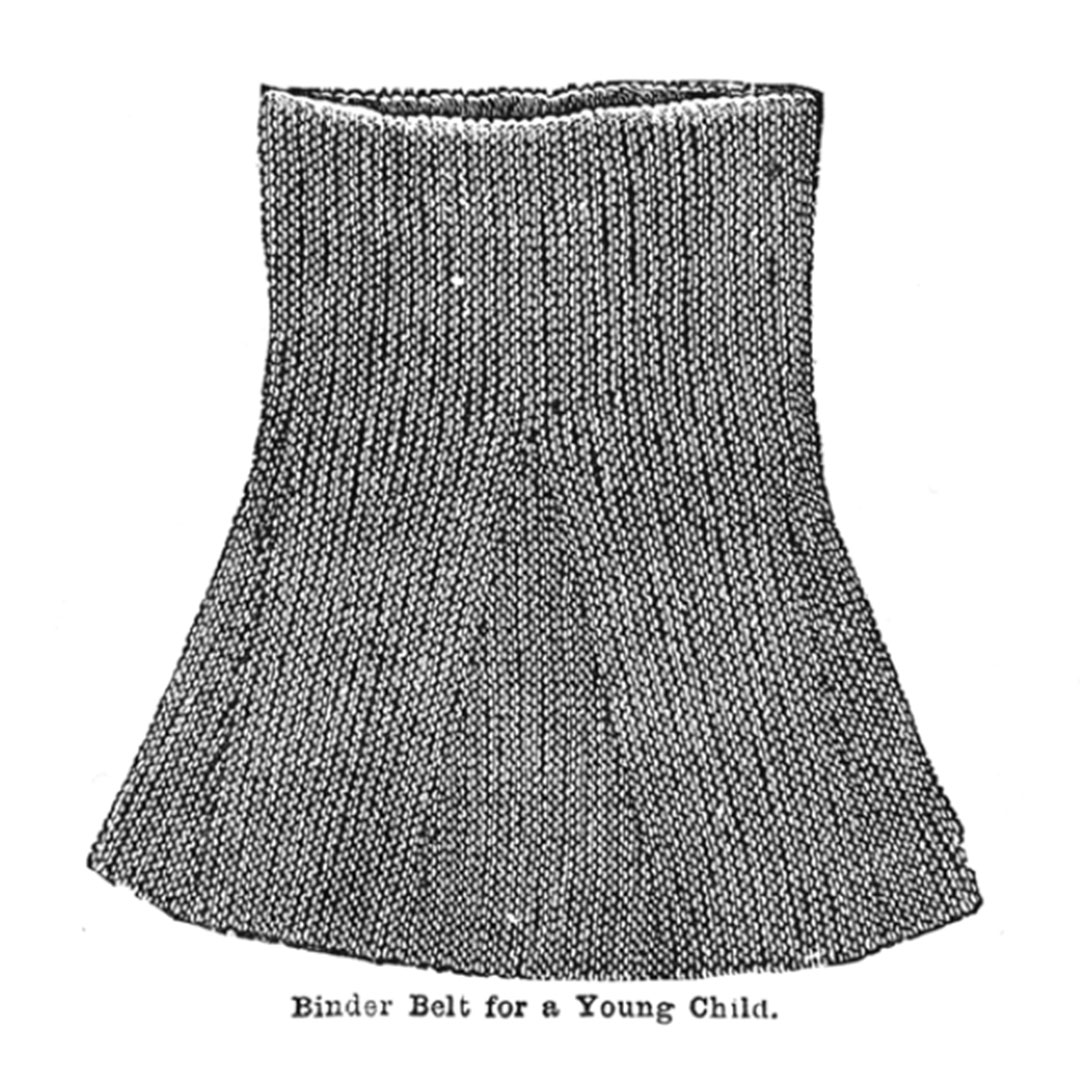 Illustration of Binder Belt for a Young Child from Weldon’s Practical Needlework Volume 3.

I came across a garter-stitch project knitted side to side and worn with the garter ridges oriented vertically. Gussets are shaped into the work, making the lower edge wider than the upper edge. A cowl! Actually no. It is a Binder Belt for a Young Child. You see, this is how Weldon’s draws you in. What is a binder belt, and why should a child wear it? “This draws over the head, fits closely round the child’s waist, and gives great warmth to the lower part of the body.” Yes, yes, marvelous! But a cowl design is now germinating. . . .

The fan-shaped gussets are achieved through the short-row technique. A short-row, for the uninitiated, is knitting only a partial row, stopping short of the end, then turning the work for a return row. To avoid a hole where the work is turned there are some very fine styles: Perhaps the best known and most used method is slipping and wrapping the next stitch on the left needle by bringing the working yarn between the needles to the opposite side without working it, replacing the stitch back to the left needle, turning the work so the reverse side faces, and placing the working yarn in front or behind the needle in preparation for the return portion of the row. In subsequent rows, the resulting horizontal bar of the “wrap” is hidden by knitting or purling it together with the stitch on the needle, making the transition as smooth as possible. Generally this method is worked in stockinette stitch.

What about garter stitch? 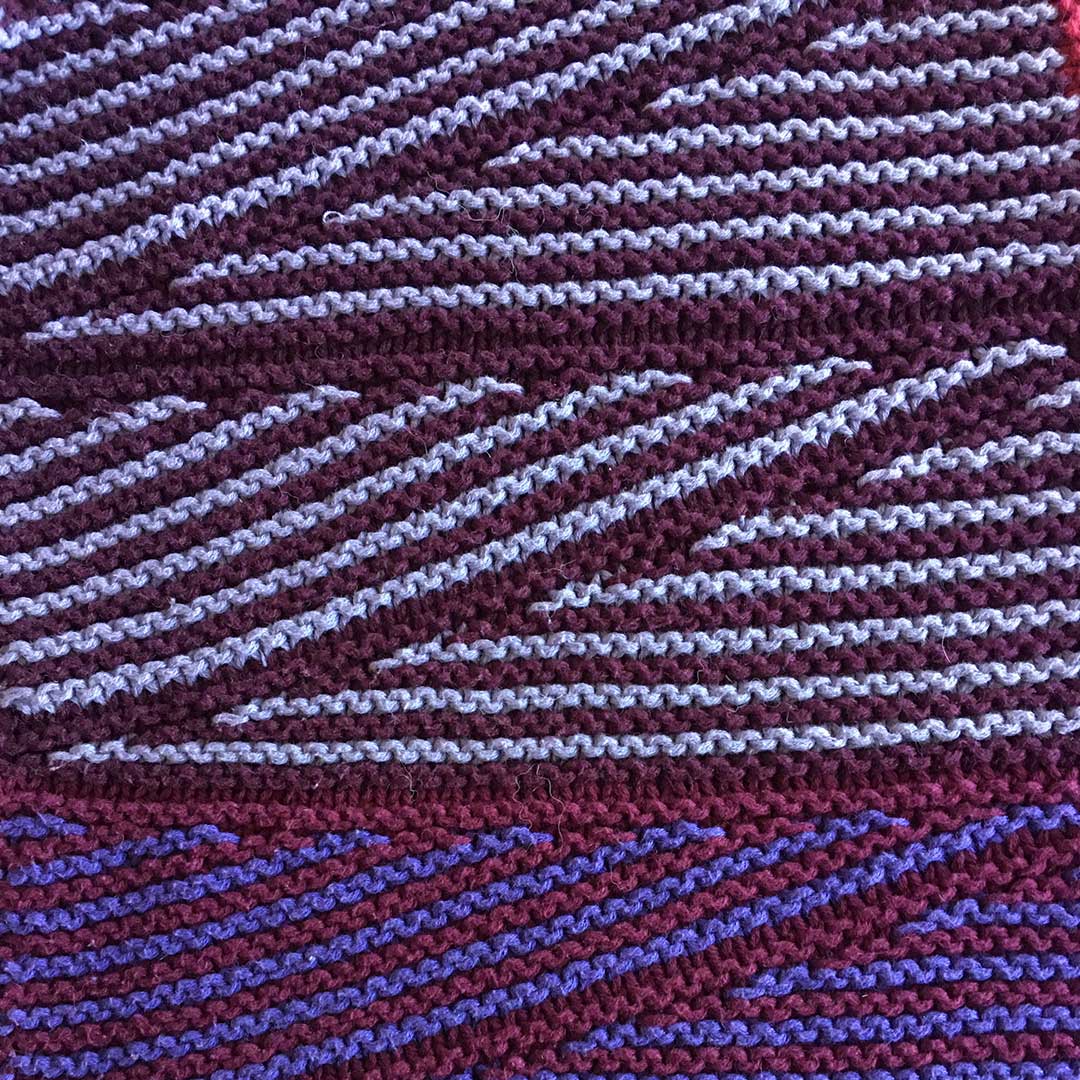 I have used short-row techniques in my designing, whether for shaping or for color and texture interest. In my kimono design shown above, I make use of the short-row technique to achieve the striped triangles each worked in such a way to allow the work to remain flat. When working in garter stitch, I wrapped and turned, but then did not hide the wrap in subsequent rows. The horizontal lie of the wrap around a stitch is in keeping with the garter-stitch character, so “hiding the wrap” is unnecessary.

The corresponding gusset shaping for the other side of the triangle descends in the same regular increments of 4 until it matches the first portion of the shaping. Weldon’s text will guide the way. The resulting texture is smooth and subtle with no gap at the turning points and is only marginally noticed at the regularly placed increments. 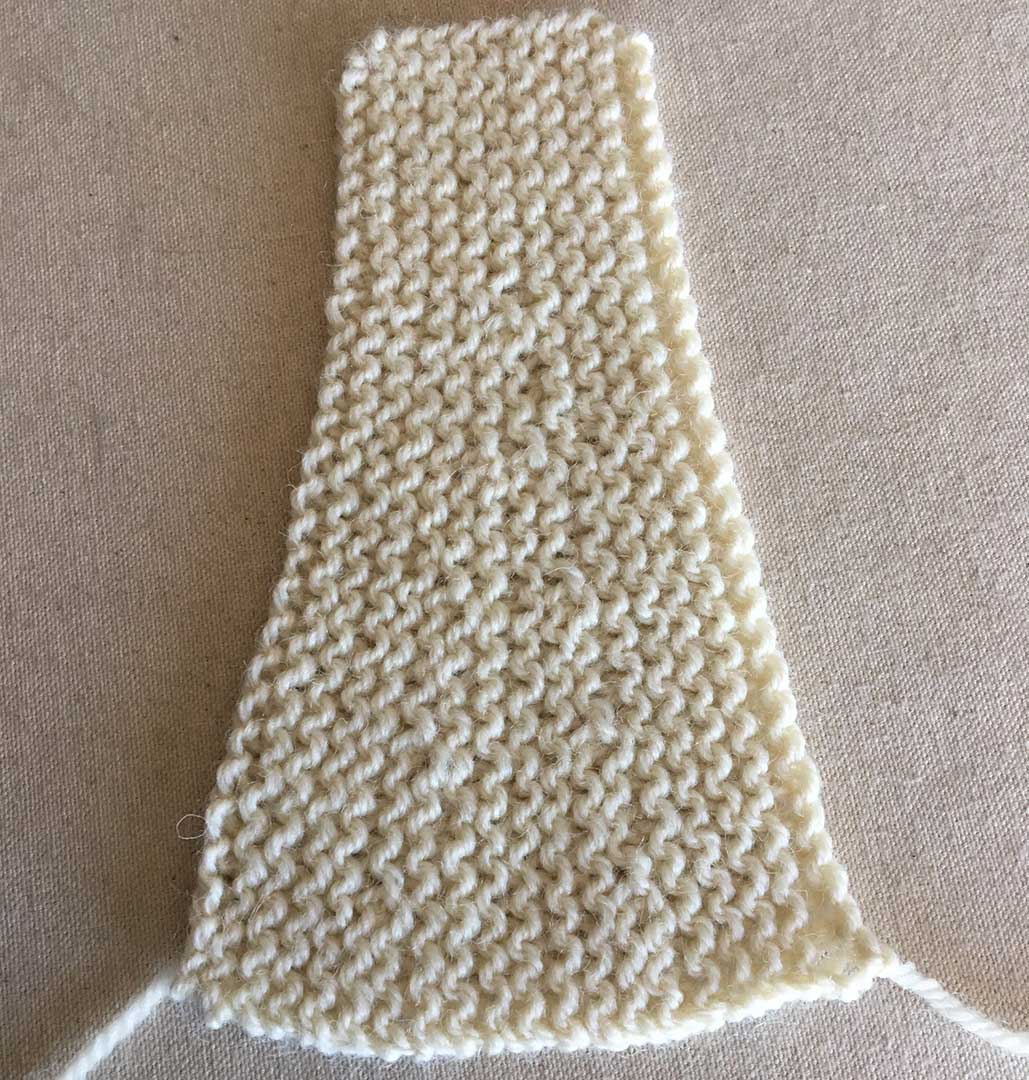 Weldon’s Binder Belt is knit with fingering-weight yarn on steel or bone needles UK size 11, which is a US size 2, or 3 mm. The gauge is fine, and one might make this project as presented, and simply wear it as a cowl that would drape in soft folds around the neck. I am interested in designing a worsted-weight cowl that will serve nicely for outerwear layered under a coat. I will determine my own choice of spacing short-row steps, regulating the number of stitches to harmonize with my gauge, as well as the size of triangular gusset I desire for the lower edge.

Now, I can buy new yarn. I think I need a new color to play with, don’t you?