A triangle is a wonderful shape to play with. There are many ways to fit knitted triangles together to construct various projects, both two-dimensional and three-dimensional.

What we call an afghan today, the Victorians described as a knitted quilt in Weldon’s. Afghans can be made all in one piece or in multiple pieces then joined together for the whole. In the case of the afghan described above, the advantage is that each triangular piece is knitted the same and separately, to be sewn together when an adequate number are made for a larger overall pattern. 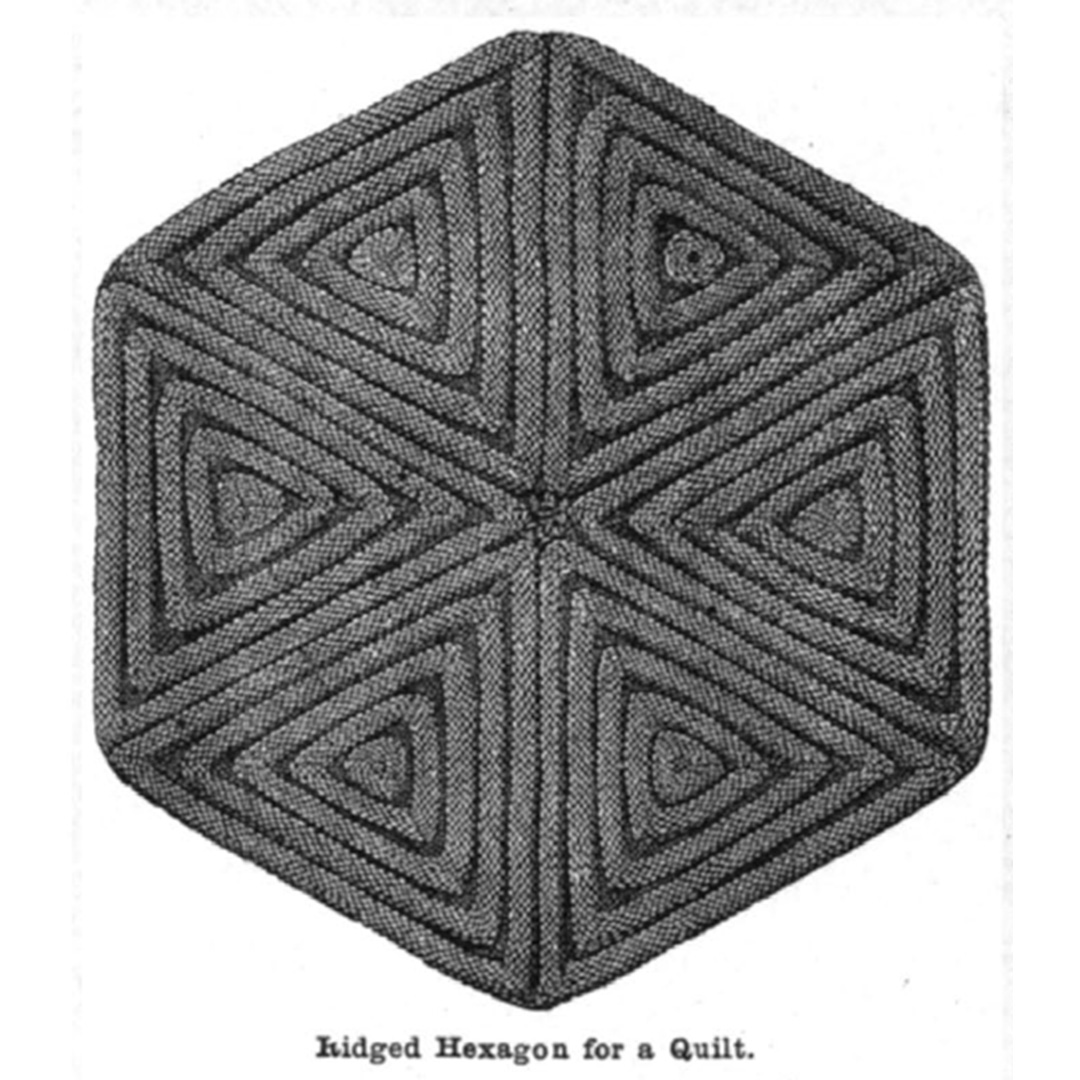 I particularly like the description included with the instructions for the Ridged Hexagon for a Quilt in Weldon’s Practical Knitter, Seventeenth Series included in Weldon’s Practical Needlework, Volume 6: “[T]he pattern is especially easy, being nothing but quite plain knitting, and, without seeing a completed quilt, it will scarcely be believed how beautiful it is, owing to the shades of light and shadow that apparently play upon the surface.” The Ridged Hexagon design looks like you would need to purl some as well, but in fact the instructions have you turn the work every four rounds, so you do in fact work “plain knitting” throughout!

The pattern in Weldon’s calls for a fine cotton yarn, and UK size 16 steel knitting needles, which is a size 0 in American terms or 2 mm European. Yikes! This fine gauge would require many hours of knitting for a bed covering and be less substantial in weight than what I envision for an afghan. I like being encased in a worsted or bulky womb of wool. Those Victorians, how did they stay warm?

But I wanted to play with the triangles. My results are below. 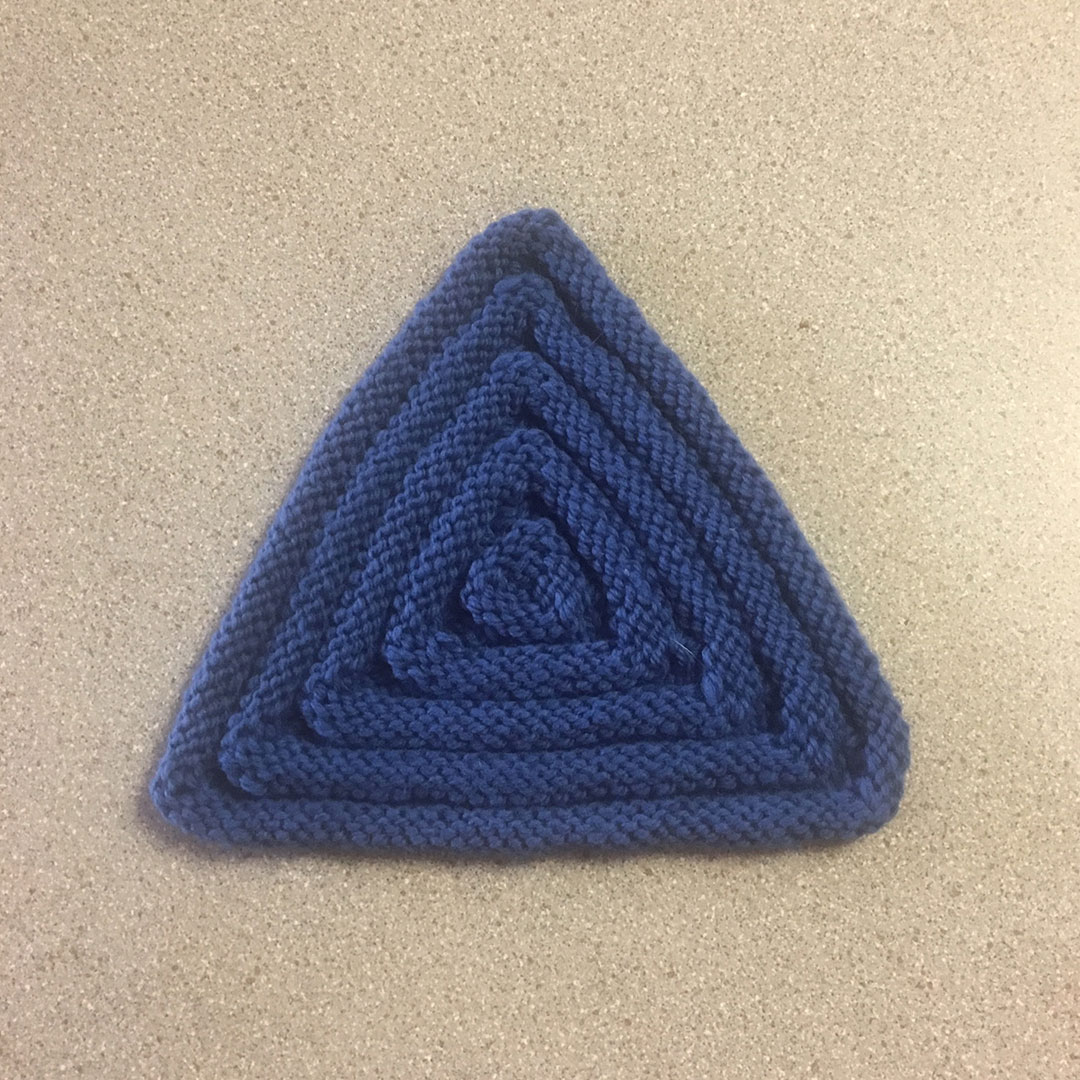 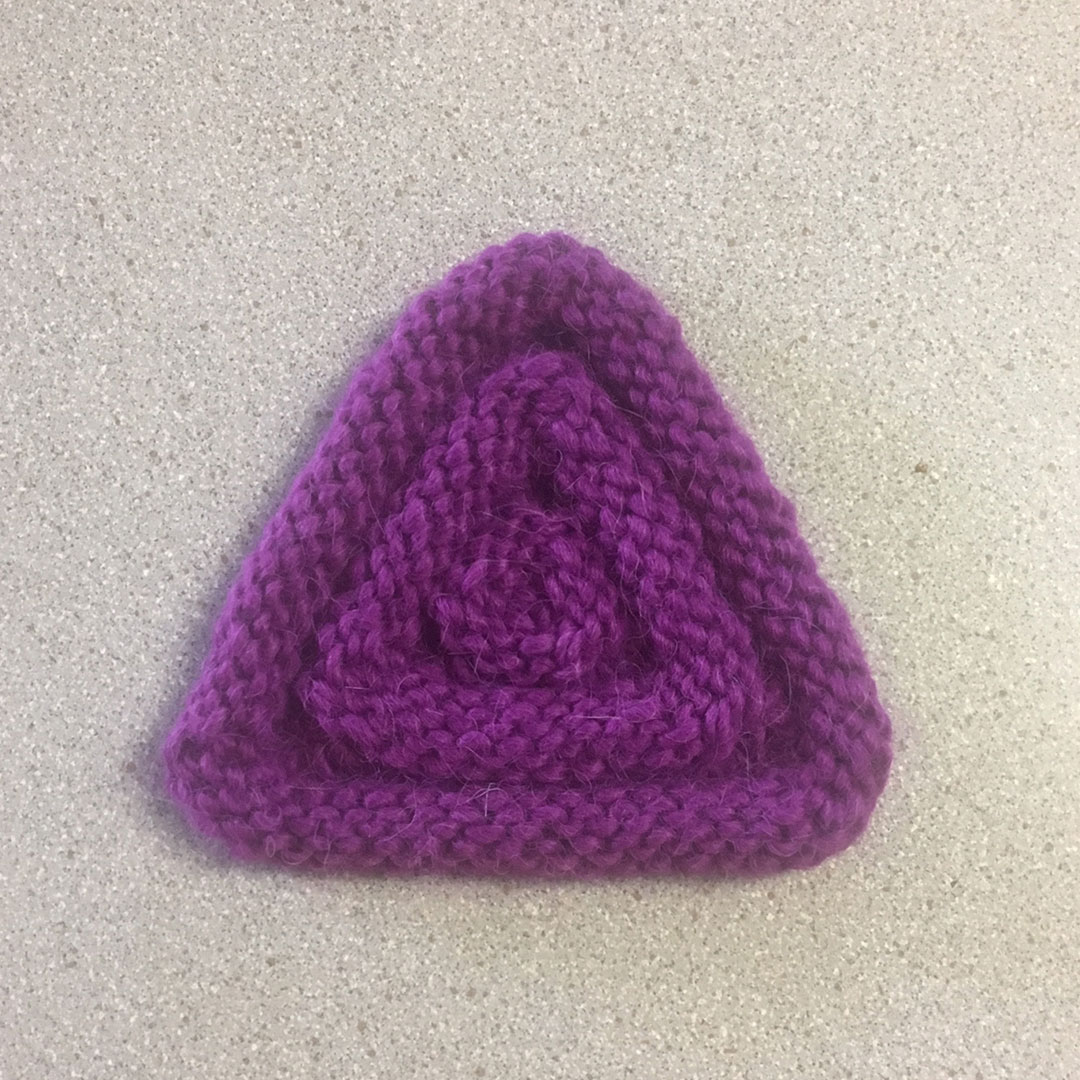 For my second sample (the magenta triangle), I chose a heavierworsted-weight singles, cast on fewer stitches for a smaller triangle, and worked entirely on double- pointed needles size 7 (4.5 mm). The size of the triangle may be customized as long as a multiple of 4 plus 3 is employed. Also, the number of ridges needs to be an odd number so that the purl ridge may be on the outer edge as well as the center; thus, the multiple of four also needs to be an even multiple of eight plus 3 to accomplish that goal. I cast on 19 stitches for each side of this small piece—57 total.

Weldon’s instructions begin with casting on 37 stitches on each of three dpns. An initial round is knit with no decreases, followed by three rounds with decreases: slip 1, knit 1, psso at the end of each dpn, decreasing 3 stitches per round. Every four rounds the work is turned, changing direction, thus creating alternating knit and purl ridges, an undulating texture, yet all achieved with the knit stitch alone. In Round 5, the text is somewhat obscure: “Turn the work so that the last stitch of the third needle will now be the first stitch of the first needle, [completely understandable so far] and, to prevent making a hole by turning, pass the under thread of the last stitch on the right-hand needle on to the left-hand pin, and knit it together with the last stitch.” Wait, what? What is meant by the under thread? The purl bump just under the needle? The thread that goes from last stitch to the next and between the needles? A leg of the stitch below the one on the needle? Do this before turning or after turning?

I tried all manner of techniques to achieve a smooth transition for changing direction and avoiding a hole with the mysterious under thread, to no acceptable solution. I resolved my dilemma by wrapping the first stitch on the left needle with short-row technique before turning, then turning the work, and proceeding in the change of direction. (I wrapped as follows: slip next stitch purlwise, bring working yarn forward between needles, replace stitch back to left needle, then turn work.) This appeared quite smooth between the knit and purl ridge textures, and most like the illustration. I am as yet baffled what an under thread refers to in this instance. 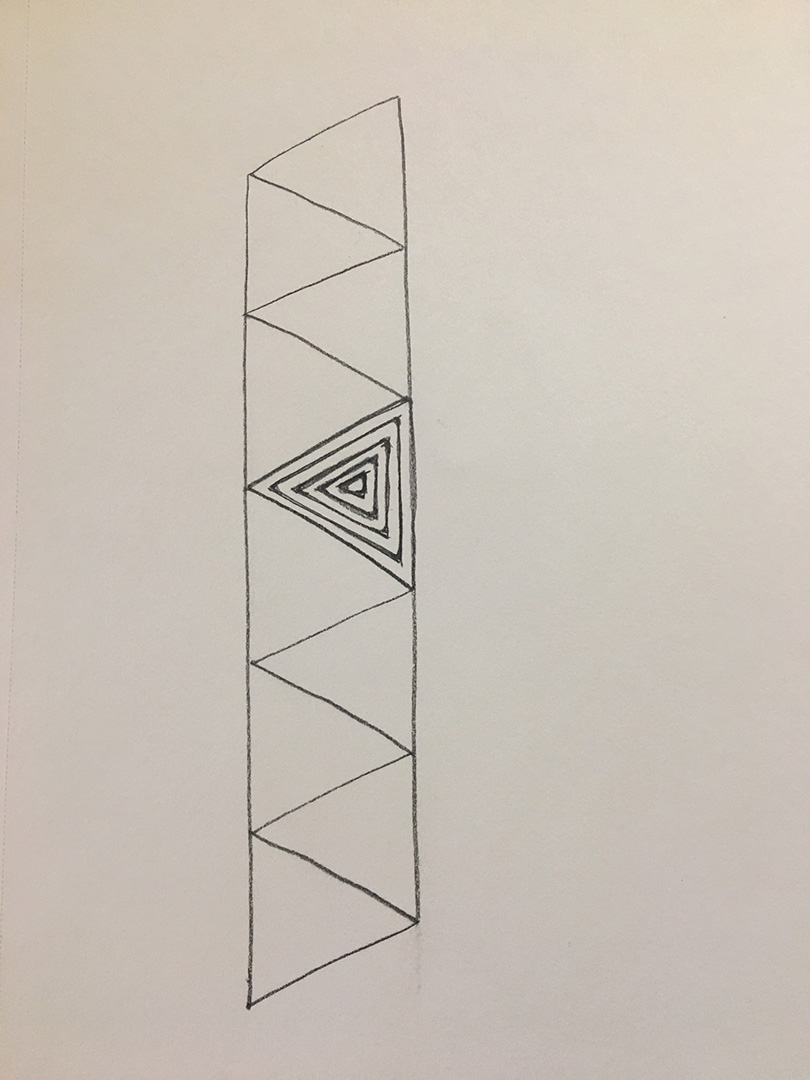 Weldon’s continues: “Rounds 6, 7, and 8: Knit plain to within 2 stitches of the end of the first needle, slip 1 stitch, knit 1, pass the slipped stitch over, and work the same on each of the other two needles.” Repeat Rounds 5 through 8 “until the triangle is decreased to 1 stitch on each needle. With a yarn needle sew the three stitches up closely and neatly to form the center of the triangle.” That’s it! And you are merrily on your way to constructing a multitude of triangles. My pencil drawing shows a column of triangles each placed in opposite direction for a nifty scarf. Three triangles sewn together pyramid style with a fourth triangle as the base, then stuffed would make a charming toy for a toddler, or a kitty, or for just admiring. Of course, you can go all out and knit a landscape of triangles for an afghan . . . 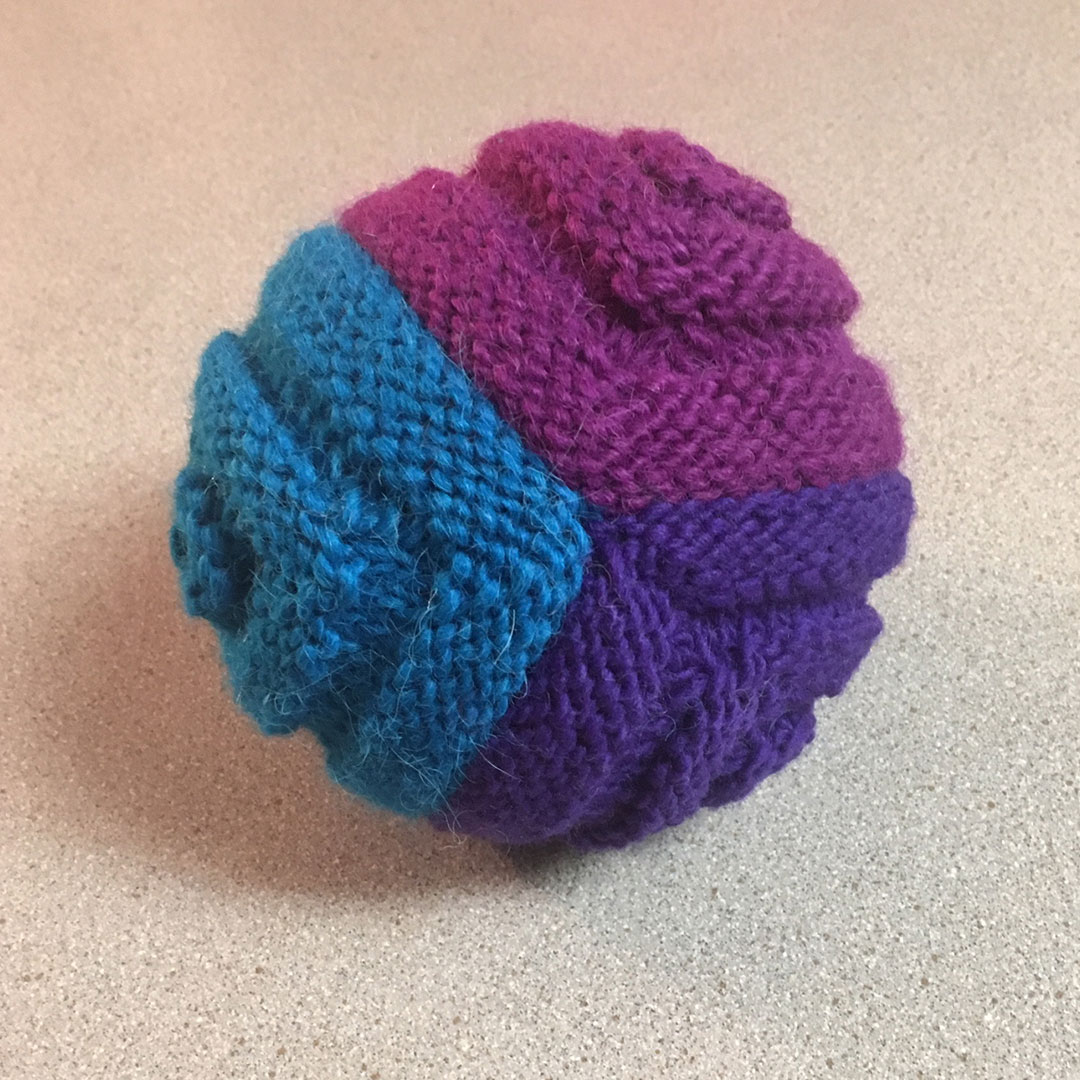 There are knitters who like to have more than one project in process at any given time, and there are knitters who like to focus on one project and finish it before moving on to the next project. You know who you are. Regardless of your particular bent, there are certainly times when a small object to knit is preferable. Time constraints, travel constraints, or a simple need to be able to pick up a small bit of knitting with an easily memorized pattern and get right after it can be amazingly motivating, not to mention amazingly fun, amazingly satisfying.