Take at trip back in time as we look at ancient fashion for the feet.

There are many a fashion faux pas we’ve been told throughout the years: don’t mix patterns, don’t wear white after Labor Day, and don’t wear socks with sandals. I bring this up not because I believe any of these (I love mixing patterns), but because after going down a historical textile rabbit hole, I found out that the world’s oldest socks were designed to wear with sandals.

First, a bit on the history of socks. My research found that historians can date the oldest socks, or at least proto-socks, to around 5000 BCE. None of these socks survived the ravages of time, but what we can gather from cave paintings is that they were probably animal skins wrapped around the feet and tied around the ankle. Another type of ancient sock was the Korean beoseon, which in its most ancient form was made from fabric wrapped around the foot. The beoseon evolved over the years into a more traditional sock sewn from woven cloth and is still worn today. If you wanted to prevent your leather sandals from chafing your feet in 8th century Greece you’d wear piloi, a foot covering made from matted animal fur.

This is just the tip of the iceberg of ancient socks. Really and truly, the history of the ways people protected their feet from blisters and kept their toesies warm in winter is fascinating and a reminder of the ingenuity of humans. Now, the oldest known surviving sock (at least as far as I could tell from my research) was found in Egypt and dates back to between 100 and 350 CE. At first glance they might look knit, but they were actually made using nålbinding, a technique where yarn is looped around a single large-eyed needle to create cloth.

My favorite ancient Egyptian sock dates back to around 300 CE. This single sock (its mate has been lost to time or perhaps the ancient equivalent of the dryer sock monster—I think every article on this particular sock I read made a similar version of this joke, yet I couldn't help myself and had to do the same), which you can see here, was made from wool, looks much like the socks we wear today, and features a split toe section so one could easily wear the socks with thong-type sandals. Based on the size of the sock, we can tell it was made for a child, and perhaps most delightfully, the sock features stripes of colorful wool. Analysis shows that 7 different colors of wool were used in the socks, each dyed with either madder (red), woad (blue), or weld (yellow). Were so many colors used to delight a color-loving kiddo, or were they made from bits and bobs of leftover yarns? (As a parent, my guess is it was a combination of the two.) Either way, it’s an amazing reminder that the ancients also took joy in colorful textiles.

I’d like to imagine some little 4th century Egyptian boy or girl playfully jumping around with their friends, showing off their new socks in the same way my son loves to show off his favorite “tigey” shoes. 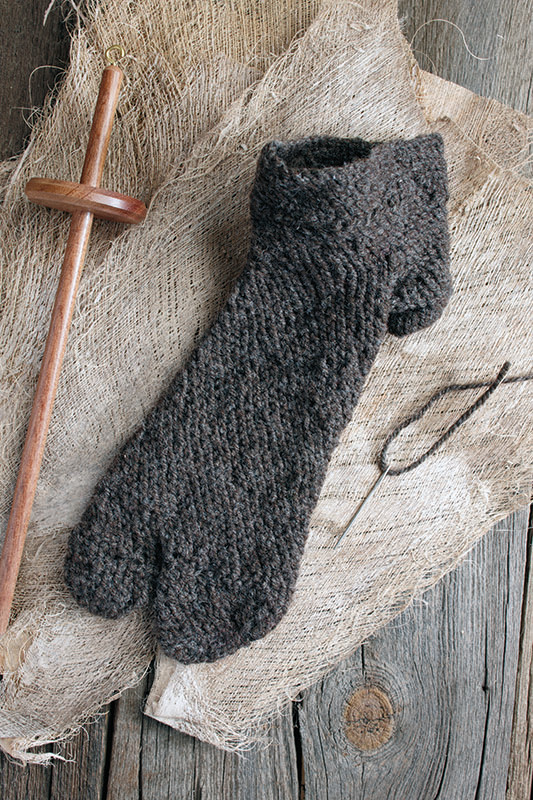 If you want to make your own pair of Egyptian-inspired, nålbinded socks you can! In the November/December 2011 issue of PieceWork, Charlotte Booth re-created a different sock, one that dates between 400 and 500 BCE. Though it’s slightly younger than the child’s sock, it features the same techniques and split-toe so you can wear them with your favorite thong sandals. And if anyone criticizes you, tell ’em you’ve got historical precedent.