The heel of the Beaufoy Socks with a striped turn. Photo by Joe Coca

A love of literature and needlework inspired Carol Huebscher Rhoades’s interpretation of a pair of Victorian socks from Weldon’s Practical Needlework, which was featured in the September/October 2015 issue of PieceWork. The design modifications for her “Beaufoy Socks for Independent Women to Knit” were influenced by a character named Emma from Margaret Oliphant’s book Hester: A Story of Contemporary Life.
—Editor

The original pattern for these socks—Gentleman’s Golf Stocking: Beaufoy Pattern—was one of the many stockings featured in Weldon’s Practical Stocking Knitter, Fifth Series: How to Knit Gents’ Cycling and Golf Hosiery, published in England in 1896. Men enjoyed these outdoor sports in the late nineteenth century, but the subtext is that women would be spending their time (probably indoors) knitting for the men rather than enjoying the same sports. This particular design promises that “[b]eing knitted with thick wool and coarse needles, the stocking will make no great inroad upon either time or patience. . . .” To my mind, though, knee socks with about ninety rounds worked after the 4½-inch (11.4-cm)-long cuff plus another 4 inches (10.2 cm) of ribbing to line the cuff, would definitely make inroads on my time! 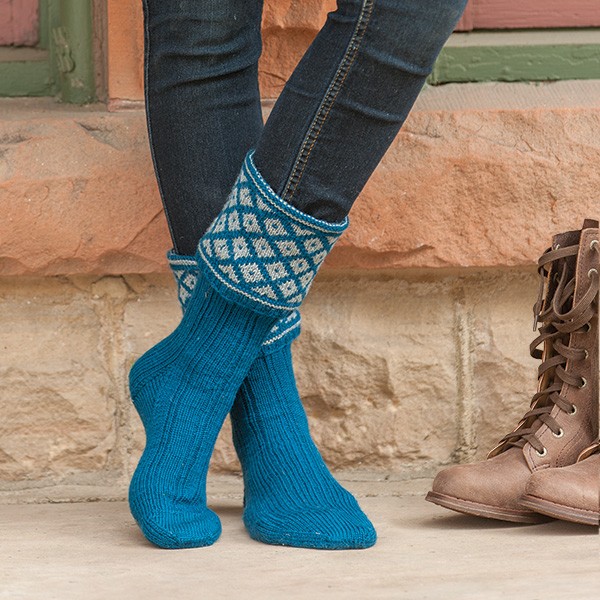 I had originally planned to make the stockings almost exactly as given in the Weldon’s pattern, but I ran into some obstacles. First of all, the sizing is for someone with long, thin legs. Interestingly, the foot is quite short in relation to the leg. After I knitted most of a cuff, I realized that it was too tight, so I increased the stitch count and needle size. As I was knitting the second sample, it occurred to me that one hank of the Teal was definitely not going to be sufficient, and, of course, I couldn’t get more of the same dyelot. By that time, I had reread Margaret Oliphant’s Hester: A Story of Contemporary Life and knew that the stockings should honor Emma, who was careful, neat, and, above all, always practical. She also was, in many ways, the most independent woman character in the book.

Influenced by Emma’s attitude, I decided to revise the original pattern from a practical standpoint. Rather than totally reconfiguring the stitch counts for a stocking that fit properly, I decided to make socks instead. Also, to use the yarn on hand more economically, I knitted the cuff’s ribbed facing with Gray rather than the Teal specified in the pattern. In a final tribute to Hester, I knitted a heel turn—a bit of fun for the humor that subtly underlies the book.

Download a copy of the September/October 2015 issue of PieceWork to knit a pair of your own Victorian socks inspired by independent women and read more about Margaret Oliphant’s Hester in Carol’s companion article, “Hester: Speculation, Knitting, and Women’s Independence.”