In 1895, Weldon’s, the paper pattern producer, devoted the 27th series of its Weldon’s Practical Crocheter to “the furtherance of this pretty industry.

Due to the increasing popularity of hairpin crochet during the Victorian era, in 1895, Weldon’s, the paper pattern producer, devoted the 27th series of its Weldon’s Practical Crocheter to “the furtherance of this pretty industry, which is daily rising in favour, and bids fair soon to become one of the fashionable works of the day.” As of late, hairpin crochet has been experiencing another renaissance.

Once classified as “Maltese Lace,” according to Weldon’s, “It was then executed with fine cotton upon an ordinary hairpin, and though pretty as a lace, it lacked variety, and the designs were too crude and too insufficient to retain hold in the world of fashionable needlework.” Hence, it was passed over for the other more trendy options of the era. However, with the arrival of “forks,” hairpin crochet, or “forkwork” as it was otherwise known, took off.

Example of hairpin work on pin.

Weldon’s 27th series begins with an introduction and includes information on the traditional tools and methods of hairpin crochet’s execution. Included are 28 projects with numerous illustrations. Hairpin crochet’s possibilities are endless. It makes lovely borders, edgings, and insertions. Join hairpin lace strips together and crochet a chic jacket or shawl.

The actual process itself is quite irresistible and compelling. Modern hairpin-crochet tools have come a long way since the 1890s. Many of those available at your local yarn store are adjustable and open on both ends to create endless, long and lacy strips of hairpin crochet. 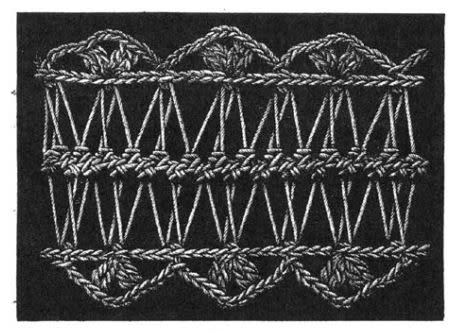 PieceWork is delighted to bring you the hairpin crochet content plus so much more in the eBook Weldon's Practical Crochet 25th, 26th, 27th, and 28th Series Set. This is the exact content available to Victorian needleworkers with neither alterations nor corrections made to the original published in 1895.