For weddings, it is rare for all dowry items to be made brand new. In this case, an upcycled square piece of textile was embroidered and then folded in half and stitched along the sides to form a small bag.

Dhataniya dowry bag with little datun or neem sticks sticking out. The bag is embellished with cowrie shells. It was fashioned out of an upcycled or recycled textile that is thought to be a square gala piece. Photos by Chitra Balasubramaniam

Dhataniya are little bags and part of the dowry made and given before or at a wedding. Dhataniya (sometimes spelled Dataniya) are intended to hold datun or the neem twigs used for brushing teeth. Neem twigs have a natural disinfectant, and brushing teeth with it strengthens teeth and keeps tooth ailments at bay.

This particular piece was one of the first pieces of Banjara embroidery I purchased. I found the bag at a tribal exhibition on a hot afternoon in Delhi and bought it from two Banjara women who were manning an empty stall. With great reluctance, the women showed me the older pieces; they were more interested in selling what they had made, which was nice but not as nice as the older pieces. I chose a few small objects, which were all part of the dowry retinue, and to put it more bluntly, they were all I could afford then! Since I bought the pieces, they have remained confined to a box for soon after I bought them, I lost my mother. It is only recently that I dug into that collection. 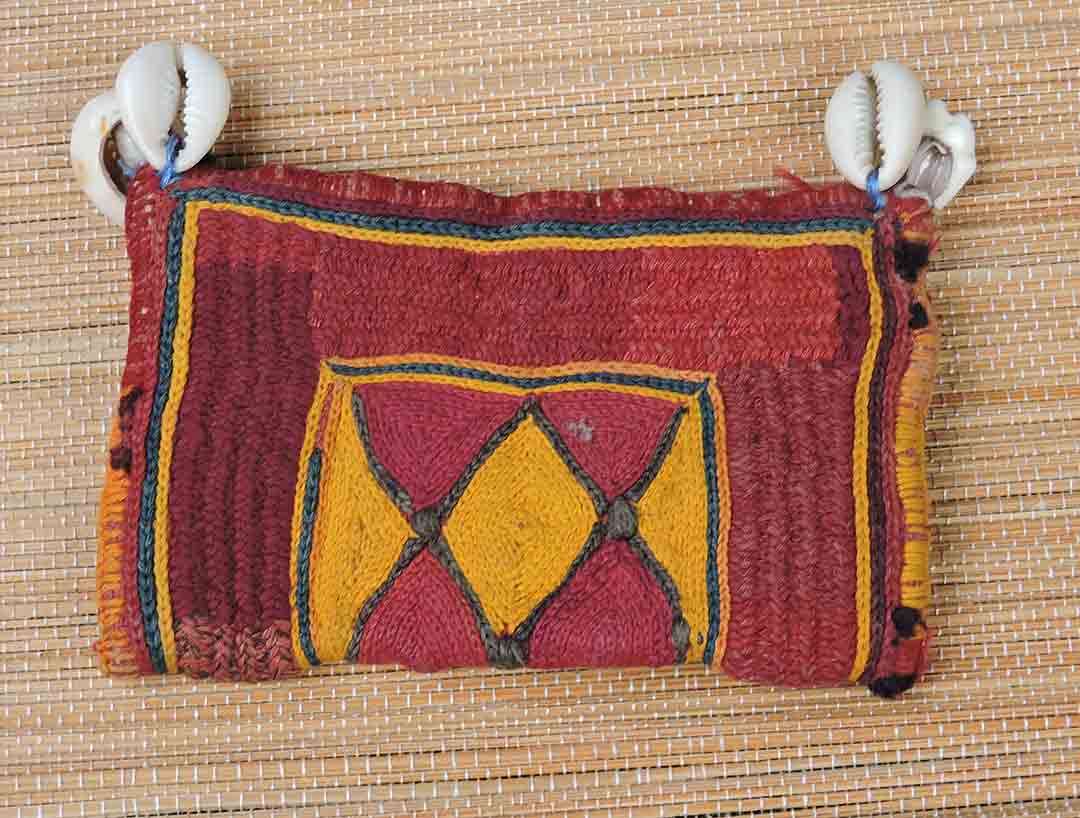 The reverse side of the bag. An upcycled square piece of textile was embroidered and then folded in half and stitched along the sides. It is finished with cowrie shells. This was not embroidered as two separate pieces and then stitched together as a normal bag would be.

The few experts I consulted confirmed that the bag was a dhataniya. Dhataniya are open bags and measure about 4 to 5 inches in height and depth and are about 8 to 10 inches in length. The length of a neem stick, when store bought, is about 6 to 7 inches, but when simply torn off of a branch and broken can be smaller, 2 to 5 inches. This particular dhataniya is smaller and measures only 3 inches in height and 5 inches in length.

In a custom carried out in Banjara community during the pre-wedding ceremony, the bride goes around the village carrying neem sticks or datun. She gives one stick to each of the elders of the community, along with a pot of water, and seeks their blessings. The sticks are carried in this bag, which is specially made for this purpose.