Uncover A Pair of Knitted Socks Inspired by a Mystery Novel

Have you ever thought of using double-pointed needles from a pair of knitted socks as a murder weapon in a mystery novel? Author Patricia Moyes did just that in Night Ferry to Death.

Have you ever thought of using double-pointed needles from a pair of knitted socks as a murder weapon in a mystery novel? Author Patricia Moyes did just that in Night Ferry to Death._ The book served as inspiration for Mimi Seyferth’s “Windmill Socks to Knit” featured in the September/October 2016 issue of_ PieceWork. Here’s Mimi to tell us more.

In deciding on a companion project for the preceding article, I thought it appropriate to design a pair of socks knitted on double-pointed knitting needles, given that the crucial clue in Patricia Moyes’s mystery novel Night Ferry to Death involves an unfinished knitted sock and a missing double-pointed knitting needle. A Windmill Stitch pattern, found in the Japanese stitch dictionary 1000 Knitting Patterns Book (Tokyo: Nihon Vogue-Sha, 1992) and a Dutch heel seemed to be natural design elements for socks inspired by a mystery featuring a diamond theft in Amsterdam. 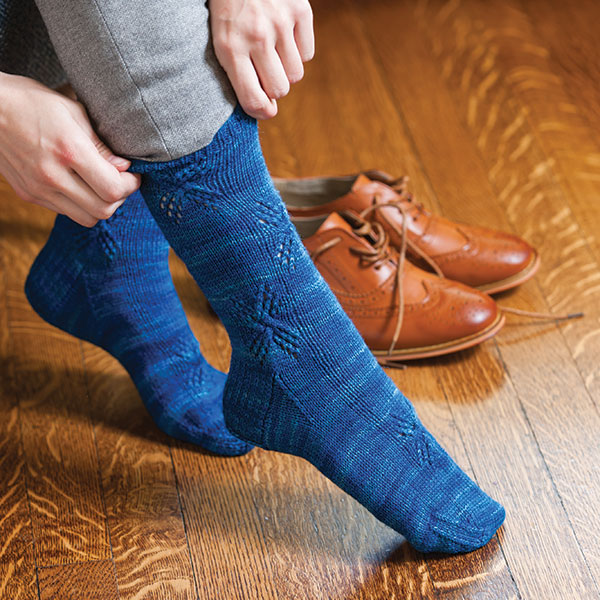 The Dutch heel, also known as the Square heel, is considered one of the easiest heels to knit because of the consistency of the stitch shaping in the heel turn. The distinctive feature is a heel band that continues under the heel into the foot. In her fall 2008 knitty.com article, “Socks 102,” Kate Atherley noted that because the width of the heel band can be varied without causing a significant variance in fit, the Dutch heel provides flexibility to accommodate different stitch patterns.

The Dutch heel appears to date back to at least the 1880s. Sophia Frances Anne Caulfeild and Blanche C. Saward’s The Dictionary of Needlework (London: L. Upcott Gill, 1882) includes instructions for knitting a Dutch heel. Blogger Kim Brody Salazar noted in a March 2005 blog that mention of the Dutch heel appears in an 1883 issue of the Girl’s Own Paper, a weekly British periodical, published between 1880 and 1956, intended, by its first editor, “to foster and develop that which was highest and noblest in the girlhood and womanhood of England.”

MIMI SEYFERTH, a lawyer who lives outside Washington, D.C., was first introduced to Henry and Emmy Tibbetts by her mother, an avid mystery reader. Mimi, who now views Henry and Emmy as old friends, periodically rereads her dog-eared copies of Moyes’s mysteries, which are now, sadly, out of print in the United States.

Download a copy of the September/October 2016 issue of PieceWork and cast on Mimi’s “Windmill Socks to Knit” inspired by a mystery novel. Find more knitted socks designed by Mimi Seyferth and inspired by literature in the blog post “House of the Seven Gables Knitted Socks.”