Former PieceWork editor Veronica Patterson shares some of her treasured bags from around the world.

All bags from the collection of the author. Photos by Joe Coca

I have a set of small bags that I treasure. I think of each of these bags by one of its several “given” names, names that reflect how that bag came to hold something intangible that I keep. Each is in its own way a keep, that most secure inner space in a medieval castle, and I am a keeper. 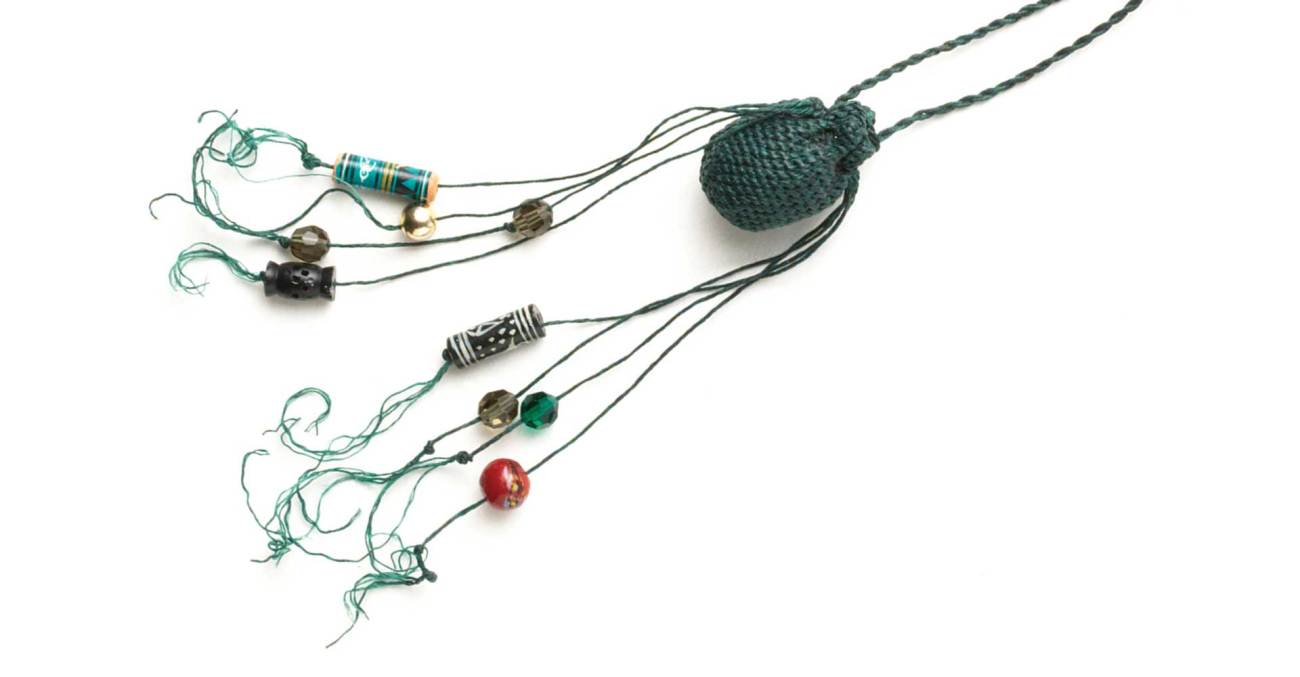 I name it Lens bag and Handwork of the World bag because it came to me from Linda Ligon, cofounder of Long Thread Media, as the stories that would go into the fledgling PieceWork magazine began to unfold. If the Hmong people, a hill-tribe people once in China, then in Laos, Thailand, and northern Vietnam, sought asylum in the United States, and if their exquisite stitching led them to work on Amish quilts in Pennsylvania, then I needed to examine the world more closely through this textile lens. (See “The Amish and the Hmong: Two Cultures and One Quilt” by Trish Faubion in PieceWork, November/December 1993.) How had these two cultures intersected, and how might the bold color blocks of one and the intricate reverse-appliqué designs of the other come together? What had once been the end of a traditional sash decorated with reverse appliqué and the tiniest stitches had become a bag; inside it was a universe of peoples and textiles I did not know. 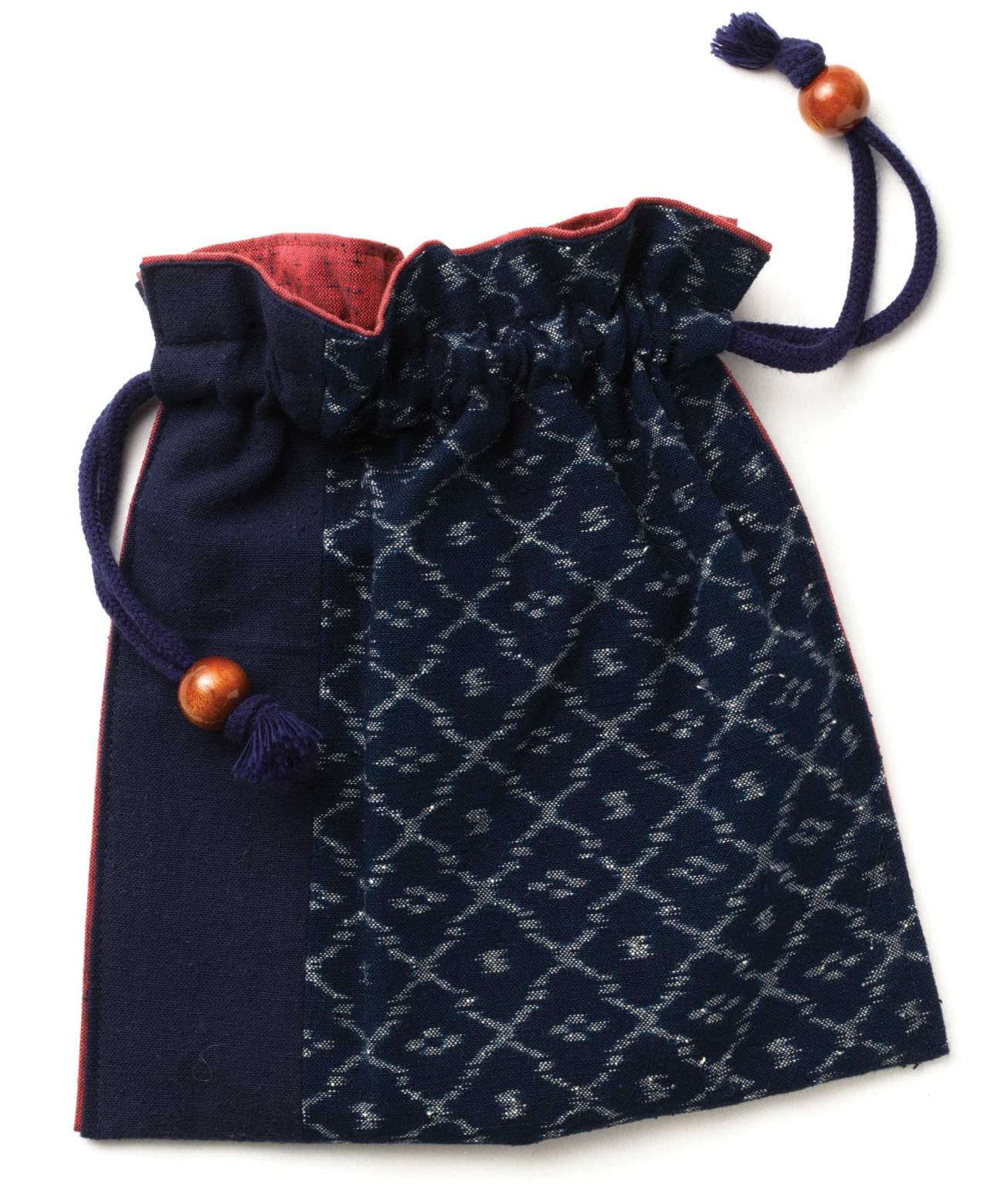 I call this bag Most Venerable Thread bag; I also call it Almost Left Unfinished bag because all I could do was begin it. The project called A Treasure Pouch in Simple Looping follows Linda Ligon’s article “The Ubiquitous Loop” (PieceWork, January/February 1994). Determined to experience what Linda had described as “an airy gesture in thread” and supplied with a fine green thread of Irish waxed linen, I completed the small base of the pouch. Then editorial deadlines came, and the stalled project sat like a green-spoked sun until Jean Scorgie, then editor of Handwoven, finished it for me. I was overwhelmed when I received the finished necklace pouch with dangling beads, plump with brown rice and generosity. I still wear it with pleasure.

First named the Bag of Many Blues, it came from a close friend who lives in Illinois and worked for many years at the Chicago Children’s Museum. Long ago, she helped me make my first batik fabric, a silk scarf; and she was the first to suggest that I work at Interweave. She sent this bag after the unexpected deaths of my husband’s mother and my father within a few days of each other. She had brought it back from her travels in Japan. I keep her note of sympathy, which describes the bag’s origin, inside it:

I bought it . . . in Kume, Japan. The Takada family has been indigo dyeing and ikat weaving for several generations. I visited Mr. Takada’s studio, filled with vats of dye sunken into an earthen floor. He dips each bunch of tied fiber about twenty times. He does the designing and dyeing, and his wife does the weaving. When we visited, the grandmother served us potato dumplings, tea, and sweets.

Indigo dyeing, which I came to know at Interweave, entrances me. Is it the transformative process or the striking shades of blue produced? Is it the ubiquity of indigo-dyed fabrics, from Japanese shibori and sashiko to blue jeans? Or is it the aura of ongoing generations and the world’s cultures? This handsome bag is full of consolation and of to be continued.

With its black background and bright blossom, this is the Beadedness of the World bag, the Not-Quite-a-Rosary bag that I can finger as needed. Based on the Beaded Amulet Bag to Weave (PieceWork, January/February 1997), it was made for me by my friend Nancy Arndt, who ably and cheerfully midwived issues of this magazine six times a year before moving on to other tasks at Interweave. When I hold this bag to my ear, I think I can hear elk bugling in Rocky Mountain National Park, where we still go to hear them every fall, sometimes staying from dusk into nights as dark as the jet beads. This necklace bag is so full of hope, good wishes, and years of friendship, you’d think it would be heavier.

Small and lighthearted, silk crepe chirimen bags are often shaped into birds and flowers. In nineteenth-century Japan, the daughters of samurai and merchants made such bags from kimono scraps. Inoue Shigeyoshi, founder of the Japan Toy Museum, helped collect examples of the increasingly rare bags and reprinted patterns and directions for making them. Offered as one of the Chirimen Bags to Sew (PieceWork, November/December 1994), this Chinese lantern (ground cherry) bag is the Bag of Happy Whimsy and the Bag of Saving and Celebrating Handwork of the Past, an idea at the heart of PieceWork itself.

Though small, these are hardworking bags whose threads and stitches store, carry, protect, delight, and console. Inside are memories, friendships, gratitude, and astonishments that have come from seeing the world focused through the lens of handworked textiles. If you look inside the bags that you treasure, do you, too, find fragrant, often intangible treasures? “And what is a stitch for?” I remember writing for the cover of the September/October 1993 issue, “To hold. It binds past to present, old country to new, generation to generation.”

Veronica Patterson, PieceWork’s editor from its inception in 1993 to 1997, is a writer, freelance editor, and teacher of creative writing who lives in Colorado.

This article was published in the September/October 2013 issue of PieceWork.