Those weird Victorian added their crafty touch to all manner of household objects and textiles. We offer up this example from Weldon’s Practical Knitter, Thirty-Second Series, a Lead Cushion, or Door Stop.

Those weird Victorians added their crafty touch to all manner of household objects and textiles. We offer up this example from Weldon’s Practical Knitter, Thirty-Second Series, a Lead Cushion, or Door Stop. Because who doesn’t see a plain, ordinary brick and think that it’d look better covered in knitting. 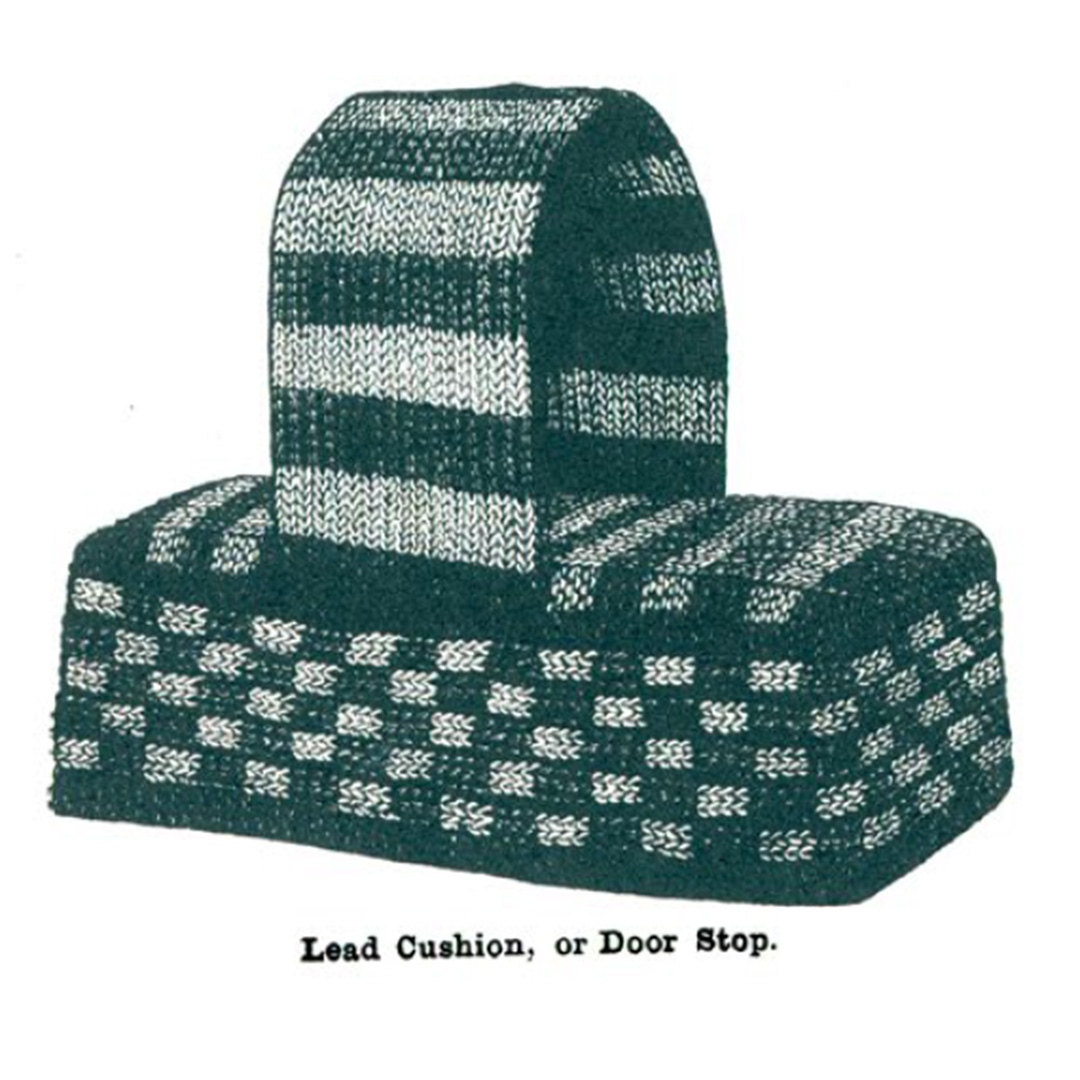 Here is the pattern as it was published in 1896, with neither corrections nor alterations.

LEAD CUSHION, OR DOOR-STOP.
AN excellent lead cushion or door-stop can be made from a brick; and this, as its place is often upon the floor, should be covered with knitting in very bright colours, to contrast sharply with those of the carpet.

Having obtained a brick, any great imperfections there may be in it should be filled up with lumps of wadding, the object being to make the finished article as neat and trim as possible. The brick should, further, be tidily packed up in a sheet of wadding, the extra thickness of it at the ends being cut away.

The cushion then only requires covering. It should first have dark-coloured beige or serge stretched all over it, and then the knitting. The measurements of a brick are—length, nine inches, and breadth, four and a half inches; but when the wadding is put over it the cushion will be slightly larger. Use about 4 oz. of four-ply fingering, 2 oz. of each of two colours, and four knitting needles, No. 12. Suppose the two colours chosen to be brown and rose. Four sections of knitting will be required, an oblong piece for the top and another for the bottom of the cushion, a long strip to bind round the four sides of it, and a handle to stretch across the top.

Begin with the piece for the top; use two only of the knitting needles. Cast on 32 stitches with the brown fingering. 1st and 2nd rows—Plain. 3rd row—Knit 2, * knit 1, putting the thread twice round the pin, thread forward as if for purling, slip 1, pass the thread back; repeat from * thirteen times, knit 2. Knit five more rows in double knitting like third row, always remembering to knit the first two and the last two stitches of each row plain. Join the pink wool, and with it work six rows like third row. Work six rows of brown and six rows of pink (alternately) seven more times—ninety-six rows of double knitting in all, counting from the third row. Then knit six more rows of double knitting in brown, two rows of plain knitting in the same colour, and cast off. This completes the section for the top of the cushion.

For the bottom of the cushion use a pair of pins and brown wool only. Cast on 32 stitches, knit 2 plain rows, then a hundred and two rows in double knitting, like the third row of the cover as described just above. Finish by working two plain rows and cast off.

The sections have now to be sewn together and to the covered brick. Stitch the handle on first, after having pressed it flat and stiffened it with a band of card or buckram, wide enough to keep it well out without straining it. Stitch up the two ends after having pushed the stiffening into the knitting through one of them; then fix the handle across the top of the cushion in the position seen in the illustration. Join the strip intended to cover the sides of the cushion into a ring; slip it into position, put on the knitted top section and sew this to the knitted sides, working carefully all about the handle, and paying attention to the neatness of the comers and that the side-covering is not fuller on one side of the cushion than on others. Finally, sew the knitted section for the bottom of the cushion to the knitted sides of it.

If this be meant to serve as a lead cushion it can be additionally weighted with shot and sand, if wished; also, the top may be softly stuffed to make it suitable for a pincushion. Ornamentation in the form of woollen pompons or tassels is easily added if desired.

Inspired by the Lead Cushion, or Door Stop in Weldon’s Practical Needlework, I plan on knitting my own cozy for a brick and giving it to a friend—it’s the perfect gift for the person who has everything . . . everything except a knitted brick! If you knit your own variation of Weldon’s knitting-embellished brick, we’d love to see it! Send a photo to [email protected].