In the corner of the kitchen windowsill in the farmhouse where I grew up sat a giant pincushion. You know, the big fat tomato kind, jammed with a motley assortment of pins and needles, the dangling strawberry emery long gone. I have the fondest memories from that kitchen—making dolls from hollyhocks, pitting cherries with a hairpin, mom putting my sister's knitted 4-H sweater in the oven to dry in time before the county fair—and the fat tomato pincushion was witness to them all. 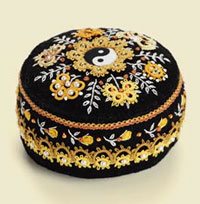 Apparently, it was the Victorians who introduced the tomato pincushion to the world. At the time, it was thought that putting a tomato on the mantle of their homes would bring good luck. If tomatoes weren't in season, they substituted by using a round ball of red fabric filled with sawdust whose presence on the mantle evolved into practical use as a place to store pins. And the Victorians couldn't restrain themselves: multitudes of pincushions were displayed on parlor tables and hung from walls in the shapes of shoes, dolls, teacups, umbrellas, and fruits.

But the hardy little pincushion was around long before the Victorians. It's likely that their use goes back as far as the fifteenth century when very expensive metal pins that had previously been stored in ornate boxes were pushed into stuffed shapes, made of decorated linens or silk for safekeeping.

We love pincushions despite their having been around for 600 years or maybe because of that. PieceWork has its own tradition with the pincushion. We had our inaugural Excellence in Needle Arts Pincushion Contest in 2000; the number and quality of entries were astounding. We were dazzled by strawberries and camels, kittens and beehives, miniature purses, and dozens of other unique designs. They arrived ruched and beaded, knitted, needlepointed, and stumpworked; they were lovingly crafted with bobbin lace, shuttle-tatted lace, and bead crochet. Our second contest in 2008 produced an equally remarkable group of submissions. 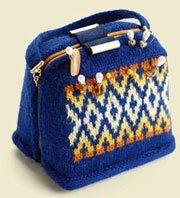