The Legacy of May Morris

Respect for the Work of Women’s Hands

The Industrial Revolution led to a revival of traditional arts and crafts in Great Britain. The sprawling factories and increasing rural poverty spurred May Morris’s father, William Morris (1834–1896), and others to believe that medieval Britain offered a better model. Morris and his friends dreamed of a return to a time when independent craft workers designed the things they made by hand and families had homes with space to grow food.

Morris and his friends—a mix of painters, artisans, thinkers, and writers—declared “holy warfare against this age.”1 They posited that a society that failed to recognize a need for craftsmen offered no dignity in labor. Together, these friends began what gradually grew into the Arts and Crafts movement, valuing simple forms, truthful materials, structure, and function—all shaped with traditional skills.

The new appreciation of medieval art and architecture that followed led to a campaign to renovate and rebuild medieval churches and cathedrals, creating a market for high-quality, handmade decoration and furnishings. In 1861, Morris, Marshall, Faulkner & Co. (“Fine Art Workmen in Painting, Carving, Furniture, and the Metals”) began selling stained glass, wallpaper, textiles, metalwork, and other items made by craft workers to churches and individuals able to afford such things. In 1875, William Morris became the sole owner of Morris & Co., which traded until 1940.

An Education in Art and Craft

Born in 1862, May spent her childhood surrounded by people making beautiful things by hand. While her father and his friends researched traditional techniques and materials, her mother Jane (1839–1914) and Aunt Elizabeth “Bessie” Burden (1841–?)—both accomplished embroiderers—were designing and making textiles for sale by the firm. When William tested natural dyes for rugs and tapestries, May and her sister Jenny (1861–1935) were given their own dyestuffs. May remembered coloring the rug patterns as “fine workshop training for a young artist.”3

In 1878, May enrolled to study embroidery at what is now the Royal College of Art. With her father teaching her to draw and design at home and the college requiring sketchbook records, May acquired a habit of observation and sketching that continued throughout her life. Most of her surviving sketches are favorite landscapes and interiors, but her botanical studies hint at the simple elegance that characterizes her designs.

By 1881, May was attending the South Kensington School of Design, learning the technical skills needed by designers or teachers of art students, which suggests that she now intended a career in craft and design of the sort that had surrounded her since childhood and was fundamental to her father’s philosophy as well as his business. May once said that she wished to be nearer the South Kensington collections of what is now the Victoria and Albert Museum, but her decision might have been influenced by the difficulties other talented women of her social circle encountered as they pursued careers in the fine arts. May as Professional Designer and Artist

May’s early life surrounded by art and craft, followed by formal training in both design and production, was perfect training for Morris & Co. In 1885, May became manager of the embroidery department, which produced embroidered items as well as kits (the pattern already drawn on linen and partially worked by an expert). Showroom items and commissions were designed by May and then worked by either May herself or skilled outworkers who were paid a living wage. This was in keeping with the socialist ideals of William Morris but was very unusual at a time when textile workers usually received a “lingering, dying wage.”4

As demand increased, May took on apprentices and trained friends in the Morris embroidery style. Women of the middle and upper classes were expected to live with their parents and then with their husbands, never to work outside the home. Needlework was a source of income and an acceptable outlet for the creativity of women unable to pursue professional careers.

May’s patterns for the kits could be redrawn by trainees, leaving her free to design for other Morris & Co. departments and even to supervise projects for other organizations, including what is now the Royal School of Needlework. The full extent of her design work continues to be revealed by research, as all work conformed to the house style, and the company’s designers entered their work in exhibitions under the Morris name. But May’s style is often recognizable, with simple hedgerow flowers and natural forms, recalling those of the medieval needleworkers she admired.

By the 1890s, May was recognized as an authority on historic needlework as well as a significant member of the Arts and Crafts movement. She contributed to important works on art and design, including A. H. Mackmurdo’s Plain Handicrafts: Being Essays by Artists Setting Forth the Principles of Design and Established Methods of Workmanship (1892), in which she challenged several principles put forward by the influential designer Christopher Dresser (1834–1904). In 1893 she published Decorative Needlework, “dedicated to those who, without much previous knowledge of the art of embroidery, have a love for it and a wish to devote a little time and patience to its practice.”

After her father died in 1896, May left Morris & Co. to focus on her own work, although editing the first 24 volumes of her father’s written works must have occupied much of her time before 1915. She designed and worked her own textile projects, taught embroidery design and techniques to students across Britain, provided expert advice on historical textiles, supported the Society for the Protection of Ancient Buildings (founded by her father), and learned silversmithing.

May’s Legacy: Respect for the Work of Women’s Hands

May actively supported women’s rights throughout her life. She paid a living wage to her workers, and her speech, “Decorative Needlework,” delivered at the International Congress of Women in 1899 condemned the economic system that sold embroideries as women’s work “at prices that devalued both the work and the worker.”6 In 1907, May founded the Women’s Guild of Arts to support independent women arts and crafts workers as the Art Workers’ Guild did not admit women until 1964.

During her 1909–1910 tour of the United States, May’s lecture, “Medieval Embroidery,” corrected the myth of embroiderers as high-born ladies of leisure to the reality of professional men and women working in embroidery guilds that safeguarded the value of their skills. The workshops of Candace Wheeler’s New York Society of Decorative Art, founded in 1877, where women were trained to design, make, and sell their work, was a shining example of what could be achieved.

May Morris passed away in 1938, but across the world today, we still follow the same model, reviving the traditional embroideries and crafts of India, Pakistan, Afghanistan, and more. Recognizing that skilled needlework deserves a living wage empowers women to make better lives for themselves and their families. May Morris would be proud. 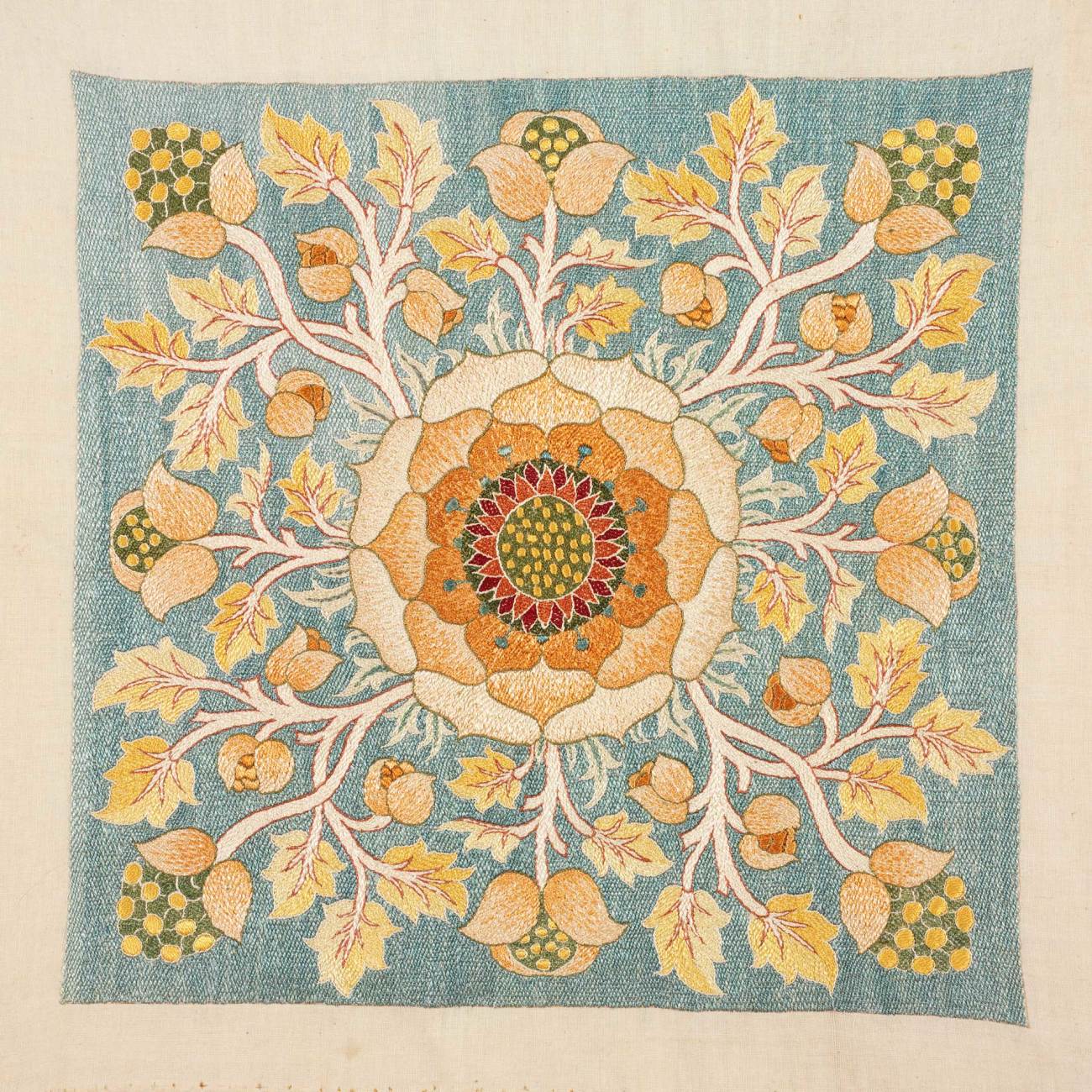 Sarah Wroot and her husband arrived in Canada’s Cowichan Valley in 2017 after 40 years in the United Kingdom. Roughly half of their household goods consisted of her fiber equipment and stash. Some became handspun, handwoven fabric, and some are now sewing and embroidery thread stitching old fabric scraps into new things. Sarah records some of her explorations at wroot.blog.