Imagine you are seven years old. It is 1943 in Lvov, Poland, and for the past several years, you and your family have been forced to live in the Jewish ghetto. This was the story of Krystyna Chiger.

In 2003, I was invited by the United States Holocaust Memorial Museum in Washington, D.C., to attend a preview of a new exhibition called The Hidden Children. As the name suggests, it was about those children who were hidden or removed from parts of Europe during World War II (1939–1945) and the Holocaust. Many were given up by families who were desperate to preserve the lives of their children, and too often, these children were the only members of a family to survive. There were many stories in this exhibition of fear and tragedy, but there were also stories of supreme sacrifice and bravery.

What caught my eye at the preview was a small green sweater knitted for a young girl by her grandmother. The girl was Krystyna Chiger. Her family had a comfortable life in Lvov, including a large apartment and a busy and popular textile shop. Across the street was another fabric and wool shop owned by her grandparents. Krystyna was a bright and inquisitive child who, as she tells it, would do mischievous things. She would ravel the little green sweater that her grandmother was knitting for her when she set it down and went out. Although Krystyna would ultimately receive a scolding, she nonetheless persisted in her tricks. 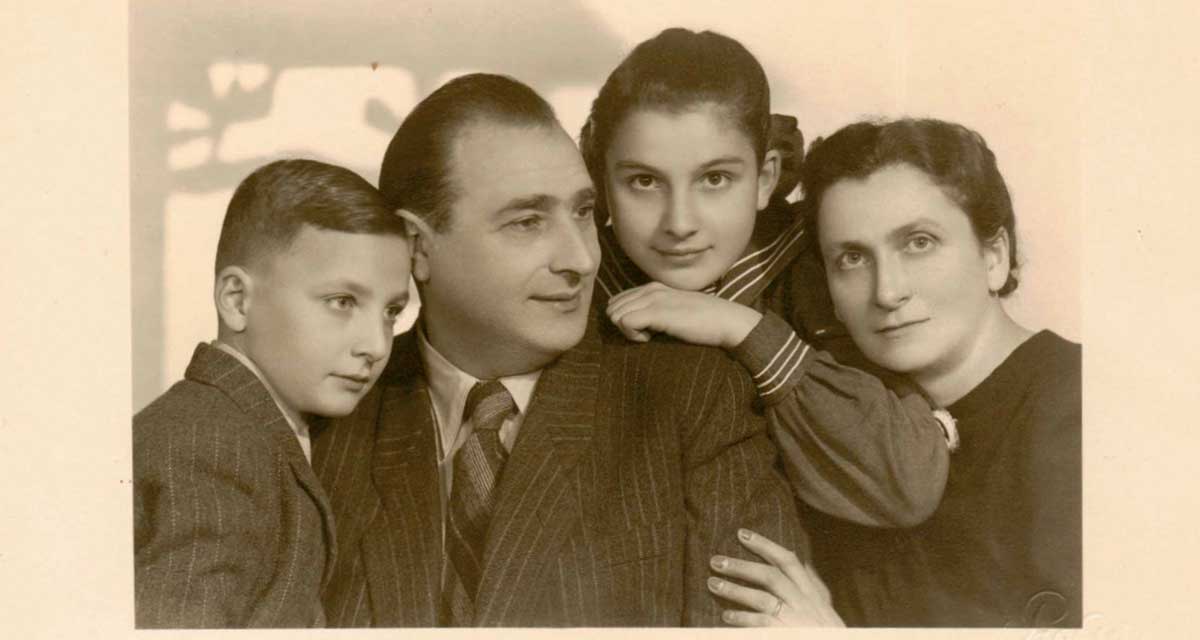 The Chiger family in Lvov, Poland. Photographer unknown. Taken before the family went into hiding in the city’s sewers in 1943. Krystyna is the little girl. Photograph courtesy of Dr. Kristine Chiger Keren

When the war broke out, Lvov was occupied by the Russians under an agreement with the Germans. When the Germans reneged on this agreement and invaded this part of Poland, circumstances quickly deteriorated for the Chiger family and the Jewish community. They were forced to give up their homes, businesses, and nearly all their possessions and were moved into the Jewish ghetto. It was from a window there, in their small living space, that Krystyna saw the grandmother who had knitted her sweater being taken away on a cart to Janowska concentration camp, where she perished.

After several years in the ghetto, on May 30, 1943, the final liquidation of the ghetto began. All its inhabitants were to be transported to the Janowska camp and certain death. In anticipation of this event, Krystyna’s father and several others had already begun to prepare a place for them to hide in the sewers below Lvov. And so it was on that night, Krystyna, her mother, her father, and her three-year-old brother descended into the sewers. They were not able to take much with them, but Krystyna took the beloved little green sweater with her.

What they all thought would be a short sojourn in the sewers turned out to be fourteen long months. Many who sought refuge there died. The Chigers, helped by three Catholic Polish sewer workers led by Leopold Socha, survived, and so did Krystyna’s sweater. After some time in Poland, Krystyna went to Israel, where she became a dentist, married, and had two sons. She was now Dr. Kristine Keren. Later, she and her husband would move to New York. The sweater, now more than seventy-five years old, bears some stains and holes, but it is remarkably well-preserved considering its age and its journey.

When I saw the sweater, I felt that I had a duty to try to reengineer a pattern for it, so its history would remain alive. After contacting the museum, I was able to set up a time to directly examine the sweater with the exhibition curator, Suzy Snyder, and Cynthia Hughes, head of textiles. I determined gauge and took many measurements, notes, drawings, and photographs that would assist me in figuring out the stitch pattern.

I spent many hours searching for the pattern in every available stitch collection I knew of, but I was unable to find a previously published form of the pattern. I thus assumed that it was something that Krystyna’s grandmother had made up or was a popular pattern of the time, commonly known, but not written. Fortunately, I was able to reproduce it on my own after examining the sweater closely.

I chose Quince & Co. Finch, a fingering-weight 100 percent wool yarn that offers great stitch definition and a large palette of colors. The original sweater is faded and stained, but many of Quince & Co. greens are quite close. Additionally, if one wanted to knit this sweater in something other than green, the company’s broad color palette is excellent. The final part of the process was for test knitters to knit the sweater and evaluate both the draft and the final pattern for clarity of directions and errors.

I donated the copyright for the pattern to the Holocaust Museum, and it is currently for sale in the museum bookstore as a hard copy. One copy is on display with Krystyna Chiger’s book, The Girl in the Green Sweater: A Life in Holocaust’s Shadow, and one of the test-knitted sweaters. Because the museum does not have an online store, it has allowed me to sell copies of the pattern on Ravelry. All proceeds are donated to the museum. (See the sidebar for details.).

In December 2014, I traveled to New York to meet Dr. Kristine Chiger Keren and tell her the story of re-creating her sweater. Her husband, Mr. Marion Keren, a mechanical and civil engineer and also a Holocaust survivor, enjoyed hearing about my process of “reverse engineering” a sweater! I brought a timeline of my whole journey, including my notes, early photographs, drafts, and swatches. I presented her with a finished copy of the pattern, and let her choose one of the test-knitted sweaters that reminded her most closely of her original. The curator had told me that it had been difficult for her to give up her sweater, but she had graciously donated it to the museum. When she chose one of the copies, she held it up and said, “Now I have my sweater back!” It was an emotional and fulfilling moment.

With this project largely completed, I have reflected on what it has meant to me: The sweater represents triumph over prejudice and intolerance, as well as a grandmother’s love for her granddaughter and the devotion of the granddaughter in return. My hope is that this small green sweater will be knitted again and again. The story of Krystyna Chiger, her family, and the brave men who helped them survive should continue to be told; the sweater will be a small piece of that living history. The sweater also should be a reminder to generation after generation of what happens when intolerance is allowed to continue unchecked. Furthermore, as young people learn about it and wear it, we can open a discussion about what it represents and why it is so important to never forget. Holocaust Museum curator Suzy Snyder commented in a television interview that she and I did about this project that the survivors won’t always be with us, but the things they’ve left with us will continue to tell their stories. I believe that small things like this sweater will somehow make a difference. 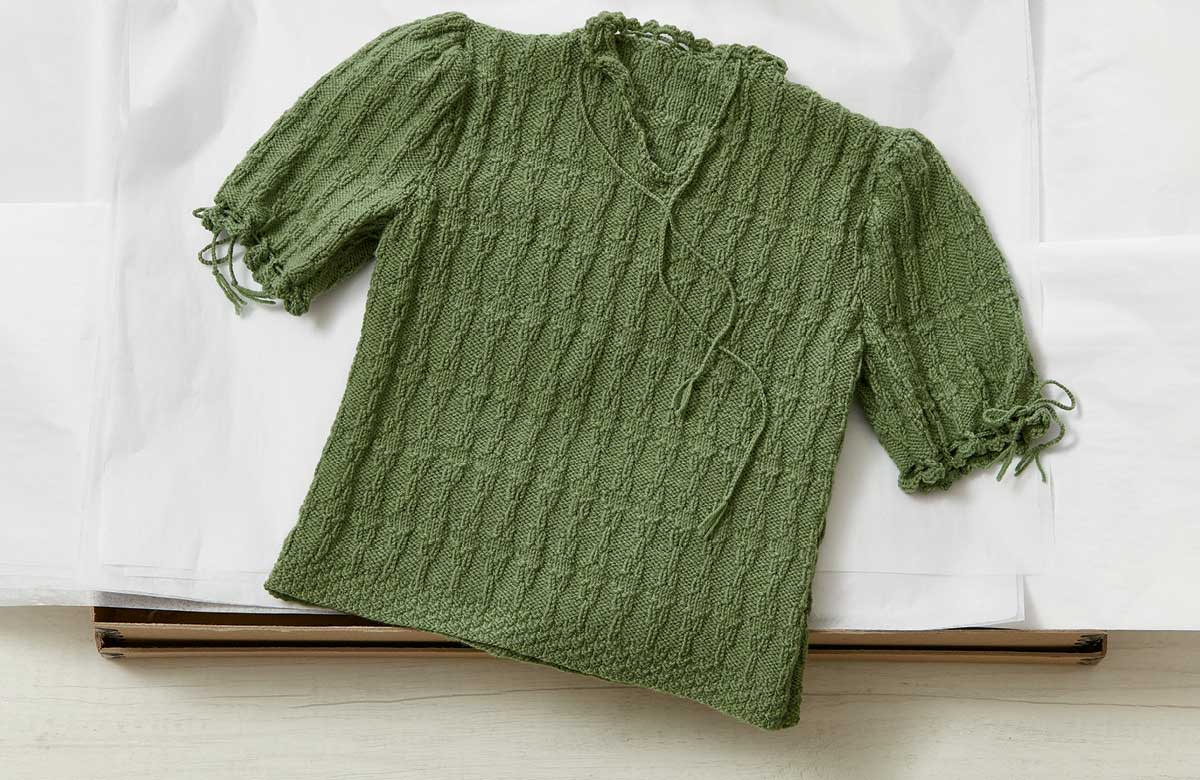 Chiger, Krystyna, with Daniel Paisner. The Girl in the Green Sweater: A Life in Holocaust’s Shadow. New York: St. Martin’s Press, 2008.
Marshall, Robert. In the Sewers of Lvov: A Heroic Story of Survival from the Holocaust. London: Harper Collins, 1990.

Lea Stern is a physician who lives outside Washington, D.C. She learned to knit from her mother and older sisters at age four. She is interested in all types of historical knitting and needlework. She thanks Julia Grossman, Phyllis Jaffe, and Liora Moriel for their technical assistance and editing. She also thanks test knitters Julia Grossman, Patti Bernstein, Jenny MacWilliam, Tanya Ford, Sue Tunney, and Jessica Kaufman. Special thanks to Suzy Snyder, curator, Cynthia Hughes, textile conservator, and the United States Holocaust Memorial Museum. Lastly, she thanks the late Deborah Pulliam for her encouragement in pursuing this project.

To purchase the pattern as a digital download, go to Ravelry, www.ravelry.com, and search for “The Green Sweater” by Lea Stern. Hard copies of the pattern may be purchased at the United States Holocaust Memorial Museum Bookstore: 100 Raoul Wallenberg Pl. SW, Washington, DC 20024; (202) 488-0400. All proceeds from the sale of the pattern are donated to the museum.
—L. S.

*This article was originally published in the January/February 2018 issue of *PieceWork.