The Firebird (жар-пти΄ца; zhar-ptitsa), a magical glowing bird from a faraway land, is a fixture in Russian fairy tales. It is a marvel, highly coveted, but it turns out to be both a blessing and a bringer of doom to its captor.

The quest for the Firebird typically is initiated by the hero’s finding one of the bird’s tail feathers. He then sets out to find and capture the bird itself, sometimes of his own accord but more often on the bidding of a father or king. Initially charmed by the wonder of the Firebird’s feather, the hero eventually blames the bird for his subsequent troubles. Tales involving the Firebird follow the classic scheme of a fairy tale: the feather portending a hard journey, magical helpers met on the way assisting in finding and capturing the prize, and the return from the faraway land with the prize. 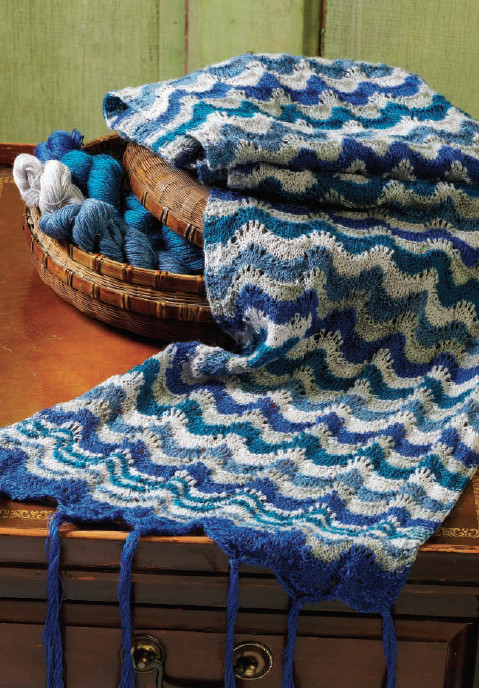 Inna Voltchkova’s knitted Firebird Feather Scarf captures the beauty of the mythical creature. She adapted this scarf from a pattern (Pero Zhar-Ptitsy, “Feather of Firebird”) that she found in a Russian knitting book published in 1956. It’s her tribute to the centuries-old Russia fairy tale about the magnificent Firebird. Find the pattern in the September/October 2010 issue of PieceWork.

Two of the best-known Firebird tales are Ivan Tsarevich and the Gray Wolf and The Firebird and Princess Vasilisa. Among the many illustrations of Russian fairy tales by Ivan Bilibin (1876–1942) is one titled Ivan Tsarevich Catching the Firebird’s Feather. The Firebird also has inspired other literary and musical works, including The Humpbacked Horse by Pyotr Yershov (1815–1869) and Igor Stravinsky’s(1882–1971) beloved 1910 ballet score, The Firebird. In paintings and lacquerware, the Firebird usually is depicted as a medium-sized, multicolored peacock with a crested head and tail feathers with glowing “eyes.”

Inna Voltchkova, who was born in Kiev, Ukraine, and started knitting when she was ten years old, is a graduate of the Kiev Institute of Fashion Design and Technology. She moved to the United States in 1991 and now lives in Illinois.

This was published in the September/October 2010 issue of PieceWork.