For centuries, the need to create warm bedding together with an endless supply of old clothing has resulted in the production of elaborately embroidered sujnis in Bihar.

India's state of Bihar is home to a centuries-old custom of transforming no longer wearable women’s cotton saris and men’s cotton dhotis into sujni or sujuni (from the Persian word sozni, “needle”), a light but warm embroidered quilt. As with so many other textiles, no one knows when the practice originated; some textile historians believe that sujnis were in use as early as the fifteenth century. Perhaps documentation is lacking because making sujnis has remained a purely domestic craft, unlike Bengal’s kantha quilts, which also are constructed from used clothing but which gained attention outside India when Portuguese traders began exporting them to the West during the seventeenth century (see “Kanthas: The Embroidered Quilts of Bengal,” PieceWork, January/February 1994).

For an everyday sujni, old clothes were the source of the entire quilt; those intended as gifts, however, were covered with new unbleached cotton fabric purchased at the market. The outer fabric used for most sujnis was white or off-white; the embroidery supplied any color.

The layering of the quilt, called in the local dialect bhitana padta tha (“setting it carefully”), required great skill to spread the folded clothing evenly as the slightest unevenness would cause the finished quilt to sag to one side. Long running stitches, kachha tanka, held the four layers in place for embroidery and quilting; once the quilt was completed, these basting stitches were removed. Traditional embroidery motifs drew heavily from nature; common motifs were the lotus flower (a symbol of wealth) and fish (symbols of fertility). Floral motifs were drawn on the cloth with charcoal; other motifs were printed on the fabric with wooden blocks. Whereas more than one woman may have been involved in layering the clothing, typically only one woman worked the decorative embroidery—as the saying goes, “When two hands work on a piece, the difference in the stitches shows.” 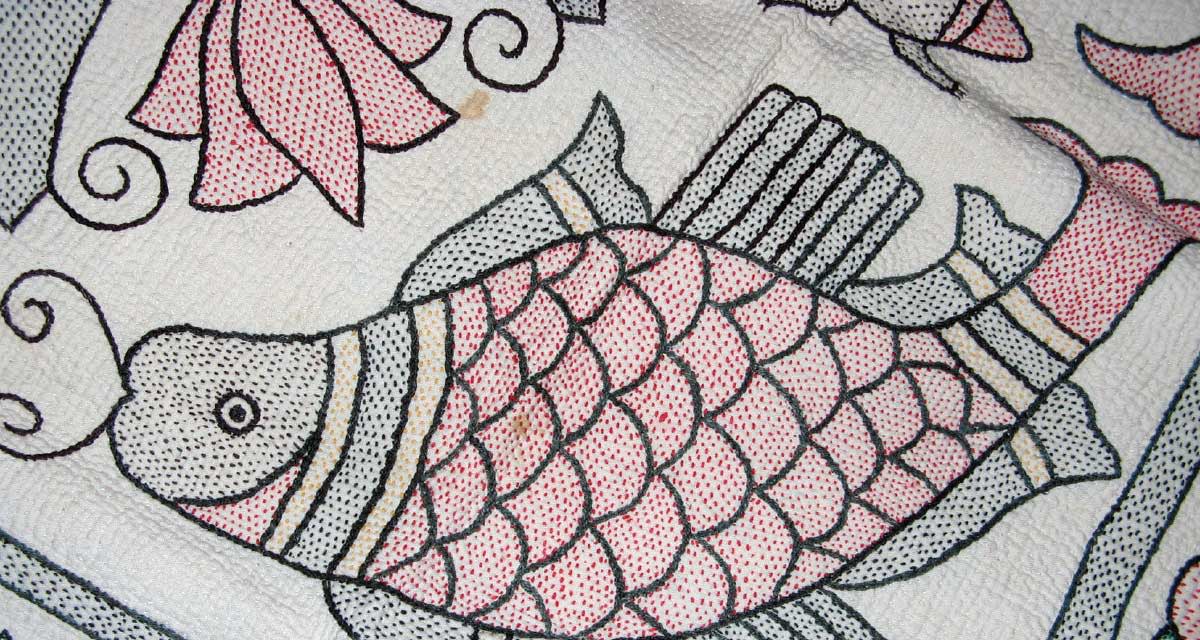 Detail of sujni for a wedding made by Karpoori Devi. Quilted and embroidered. Cotton. India. Circa 1972.

Embroidery began from the center to ensure that the finished quilt would not curl up at the edges. Small running stitches through all the layers created the design’s outline (only the outline was embroidered to save thread). Then the entire quilt was covered with small, even running stitches running in the same direction, using thread the same color as the quilt with one exception: for wedding quilts, red thread was used.

For centuries, the need to create warm bedding together with an endless supply of old clothing has resulted in the production of elaborately embroidered sujnis in Bihar. Sujnis continue to play a role there today: Although some still are constructed as bedcoverings, others are being made as wall hangings.

Chitra Balasubramaniam, of New Delhi, India, is a freelance writer with a special interest in textiles.

This article was published in the September/October 2007 issue of PieceWork.