During the Middle Ages, anchoresses and nuns were women who secluded themselves from the rest of society and, often, spent some of their time on handwork.

This embroidered hanging from 14th-century Germany was probably stitched by a young nun in Hildesheim, Germany. Photo courtesy of The Metropolitan Museum of Art

Reading and writing about pioneer women and their forays into needlework while isolated got me thinking, oddly enough, about the Middle Ages. Specifically, I wondered about the women who isolated themselves from secular society in the name of religion: anchoresses and nuns. In a time when getting married and having children was the only choice for most women, anchoresses and nuns were exceptions to the rule and often lived separate from most of society. They, like pioneer women and like those of us in lockdown today, also spent time carefully stitching away.

First of all, before I get too far, while most people know what a nun is, an anchoress (female anchorite) is a bit less well known. For a time, if you were truly devout, you could opt to be locked in a cell in a church where you would live for the rest of your life. Some anchorites never left their cells, some moved between their cells and the church or might even have little gardens with easy cell access. There was no changing your mind once you became an anchorite or anchoress—anyone who tried to escape was found and brought back. It wasn’t a decision to take lightly, and, interestingly enough, most of the recorded anchorites were women. Of course, because anchoresses lived in churches, they could have visitors or give spiritual advice, but this was somewhat frowned upon because anchorites were supposed to be dead to the secular world (see both “The Life of an Anchoress” and “Buried Alive” for more information). 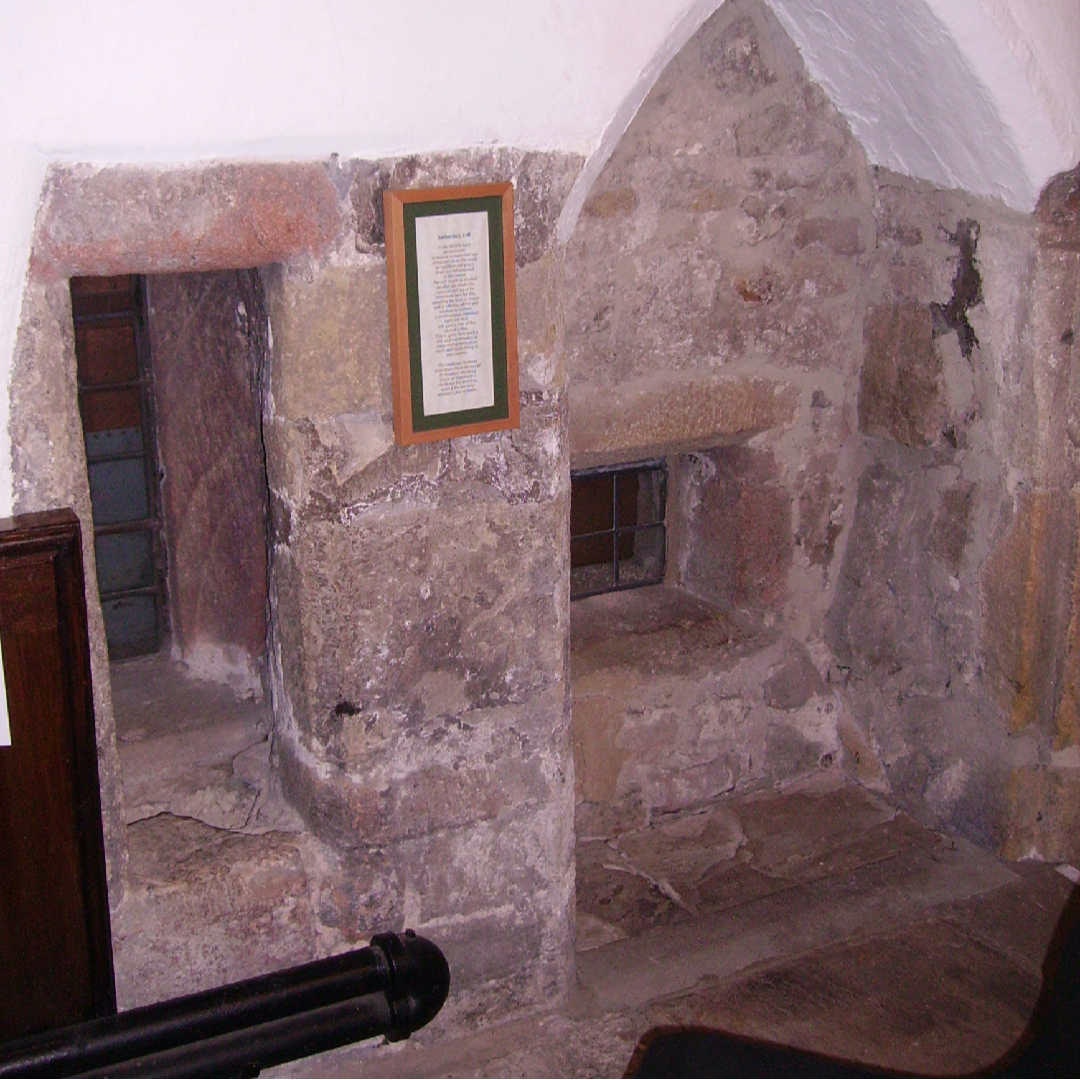 These small windows look into an old anchorite cell at the Holy Trinity Church, Skipton, United Kingdom. Small windows like this were often the anchorites’ only glimpse at life outside their cells and allowed the them to watch church services and receive communion. Photo by Immanuel Giel

What did medieval anchoresses and nuns have in common besides a passion for religion? Both groups mostly came from wealthy families. Anchoresses needed to have enough money to provide for their food and living expenses for the rest of their lives, so most came from wealth. (For more information, I highly recommend the “The Showings of Julian of Norwich,” which is a fascinating look at the life of the most famous Anchoress, Julian of Norwich, in podcast form). Nuns were often the daughters of wealthy landowners. Because both of these groups of women came from wealth and status, they would have spent years learning and practicing various types of needlework in order to make them suitable wives (see “Needlework by Nuns”). Once they left secular society to live their life in a cell or join a convent, these women continued to stitch.

A guidebook for anchoresses suggested that when not praying or otherwise engaged in a religiously oriented occupation, the women could make lace—so long as it wasn’t too grandiose. Many also spent time carefully embroidering (“Life of an Anchoress”). While I couldn’t find too much information about the type of embroidery done—and certainly no known examples survive—apparently, it wasn’t uncommon for anchoresses to embroider different items used by the church. That way, their lonely stitching wasn’t done for any sort of entertainment but rather would be a pious pasttime meant to benefit the church. 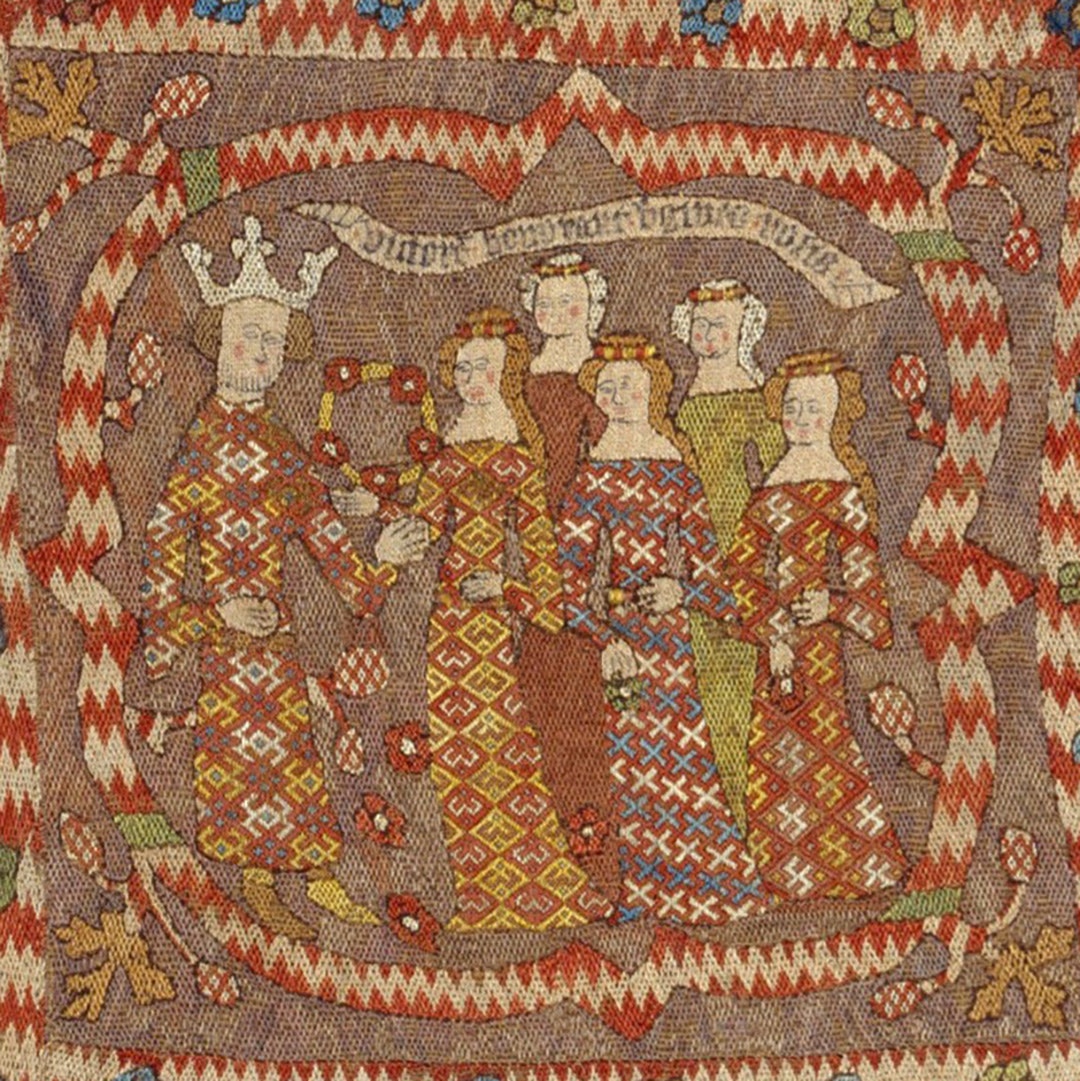 Close up of a portion of the embroidered tapestry. The dating of the project is based on matching the clothing shown to various periods of fashion.

The needlework done by nuns was a different matter. Unlike anchoresses who lived in solitude in a town’s church, nuns lived in their own community away from society. While anchoresses stitched on their own, younger nuns might receive directions on their embroidery from older nuns, and the women might stitch together in a group setting. Unlike the work done by anchoresses, some of the tapestries created by nuns have survived until today. Some of the more elaborate pieces might decorate the convent or nearby churches. From these pieces, we can learn a little bit about the women who held the needle. In one piece currently owned by The Metropolitan Museum of Art, and written about in “Needlework by Nuns,” female figures are depicted in what would be considered high fashion of the time, and art historians believe this indicates the stitcher was probably a younger nun, one who was only recently removed from the world of fancy dress and fashion. I like to imagine that young nun working on her tapestries with a group of other sisters, chatting away and stitching images of dresses from her former life as she reflected on the joys of her new one.

Both of these groups of women were exceptions to the rule in the Middle Ages in that they were allowed to sequester themselves from society—in fact they were lauded for it! But even while they remained locked up in their cell or cloistered in a convent, they held on to their former life and training as they made lace, embroidered, sewed, and did other handwork. I hope it brought them as much comfort as my own handwork brings me as I choose to stay home.

Christina Garton is the editor of Easy Weaving with Little Looms.