Bobbin lace can be used on a small scale—think a lacy edging for a collar—or articles of a much larger scale, or anything in between. Read about the magnificent bobbin-lace coverlet that once belonged to world-famous contralto Marian Anderson.

Among the items in the collection of The Lace Museum in Sunnyvale, California, is a bobbin-lace coverlet that belonged to world-famous contralto Marian Anderson. Anna Patra shares the story in her article, “Marian Anderson’s Bobbin-Lace Coverlet,” in the May/June 2011 issue of PieceWork. 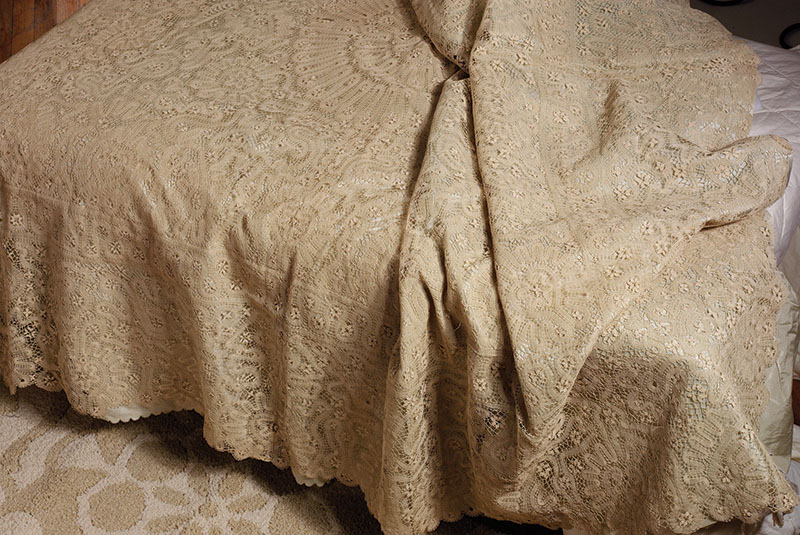 Here are some highlights from that article:

“In her autobiography, My Lord, What a Morning, the great American contralto Marian Anderson (1897–1993) lists, among myriad necessities that accompanied her on tour, an iron, a sleeping bag, an electric hotplate, and a sewing machine. She liked to work with her hands, sewing and hemming in the hours before she went on stage. At one point, Marian commented, ‘There are never enough blankets for me. I happen to get cold feet easily.’ One that may have warmed her feet is a handmade coverlet.

"The coverlet . . . is made of linen bobbin lace mounted on pale green silk taffeta. Of probably nineteenth-century Russian provenance, it measures 86 by 72 inches (218.4 by 182.9 cm) and is decorated with medallions and a ribbon-scroll pattern. A sham, of the same linen bobbin lace and silk taffeta (also in the museum’s collection), measures 43 by 43 inches (109.2 by 109.2 cm). Marian most likely purchased the coverlet and sham in France during the 1930s.”

Anna’s article includes information on Marian’s brilliant career as a singer, why First Lady Eleanor Roosevelt and President Roosevelt helped organize a free concert for Marian on the steps of the Lincoln Memorial in Washington, D.C. in 1939 that attracted 75,000, and details on her private life. It’s fascinating.

Thank you Marian for your voice, your courage, your grace, and for buying the magnificent coverlet!

This article was originally published October 16, 2017.