Re-creating a Bjärbo sweater was a knitting challenge. But for Mimi Seyferth, it was also a way to honor Rita Riffolt Varney and her pride in her Swedish heritage.

Rita Riffolt’s Swedish Bjärbo sweater. The family believes the sweater was given to Rita in the late 1920s, possibly by friends of her parents living in Sweden. Collection of Natalie Varney. Photos by Matt Graves unless otherwise indicated

When my college roommate Natalie Varney went through her mother’s cedar chest of treasured garments after her mother’s death, she discovered a handknitted sweater (shown at right) that had been sent from Sweden to her mother, Astrid (Rita) Riffolt Varney (1920–2018). Judging from the size of the sweater, Natalie and I believe that the sweater must have been given to Rita in her youth in the late 1920s. Unfortunately, we do not know who gave the sweater to Rita, but we presume the sweater was a gift from a friend of Rita’s parents, who were both Swedish immigrants to the United States.

Rita’s father, Nils August Magnuson Riffolt (1888–1957), was born in Stockholm. Orphaned at an early age, Nils was adopted by his foster parents, the Magnusons. Although Nils was an excellent student, his foster parents could not afford to provide higher education, and, accordingly, after eighth grade, Nils attended a trade school where he learned technical instrument making. In 1914, Nils sailed steerage class, with virtually all his possessions in a straw trunk, to the United States. On that journey, Nils decided that he needed a new last name—one that was unique and, unlike Magnuson, did not carry a Swedish national identity. Nils invented the surname Riffolt, by which he was known for the rest of his life. 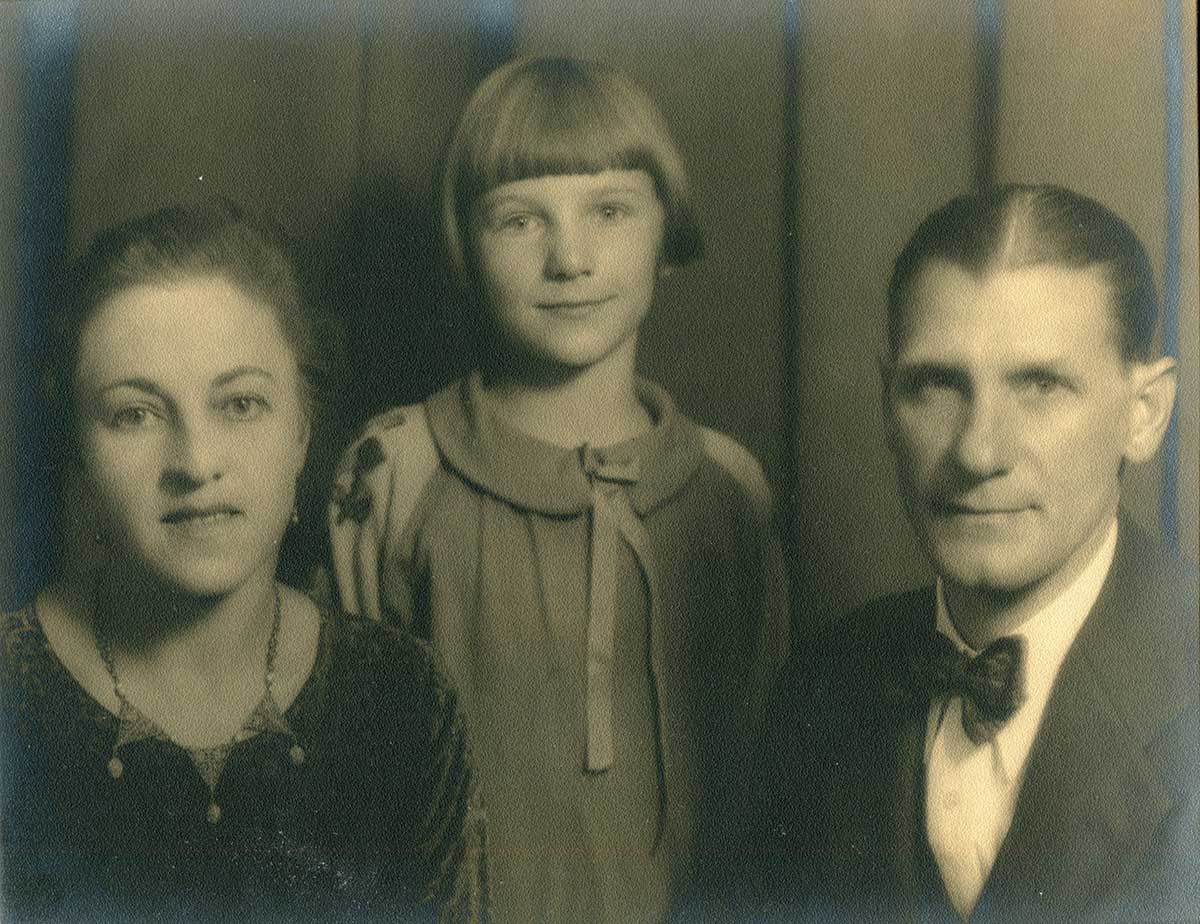 Nils’s reputation as a highly skilled instrument maker reached rocket scientist Robert Goddard (1882–1945), who was then on the faculty at Clark University in Worcester, Massachusetts. Goddard, who needed an instrument maker to assist in his rocket development research, convinced Nils to move to Worcester and to enroll as a physics student at Clark University, where Nils earned both bachelor’s and master’s degrees. Nils persuaded Astrid Bergstrom (1893–1957), a young woman from Lappland, whom he had met in Stockholm, to join him in Worcester and to become his wife. Their daughter Astrid (Rita) was born in Worcester in 1920.

In 1924, Nils joined the physicist Louis Ten Eyck Thompson (1891–1978) at the U.S. Naval Proving Ground in Dahlgren, Virginia, where Nils worked with Thompson on a variety of naval ordnance problems, as well as nonmilitary projects; he became the director of research at the Dahlgren facility in 1954.

In 1956, Nils retired from the naval base in Dahlgren and he and Astrid moved permanently to the “second home” they had built at the foot of the Blue Ridge Mountains in Criglersville, Virginia. Tragically, on January 9, 1957, Nils and Astrid suffered a head-on car collision. Nils died instantly; Astrid died twenty-four hours later.

Rita grew up on the naval base in Dahlgren, experiencing an idyllic childhood as she paddled her green canoe on the Potomac River, played with her beloved dog, Viking, and rode her pony, Rose. Rita earned a bachelor’s degree in biology at the College of William and Mary and went on to earn a master’s degree in bacteriology at the University of Wisconsin. After completing her master’s, Rita worked for the FDA, helping to develop penicillin.

During World War II, Rita met Robert N. Varney (1910-2011), a physicist who worked with her father on projectiles at Dahlgren. Before the war, Robert, who had earned a Ph.D. in physics at the University of California, Berkeley, had taught at Washington University in St. Louis, Missouri. Rita and Robert married in 1948 in Dahlgren. After their marriage, they moved to St. Louis, where Robert resumed his faculty position at Washington University and Rita became a gourmet cook and an accomplished weaver. Robert and Rita had two children: Nils (1949– ) and Natalie (1951– ). In 1964, when Robert took a job in private industry, Robert and Rita moved their family to Palo Alto, California, where they lived the rest of their lives.

Throughout their married life, Robert and Rita traveled widely. In 1954, Rita accompanied her father on a trip to Scandinavia. During 1957 and 1958, Robert and Rita and their children lived in Stockholm, Sweden, while Robert taught at the Royal Institute of Technology. During that tenure, Rita purchased several Swedish Bohus sweaters, which, sadly, were not among her belongings at her death. Robert died at age one hundred on April 9, 2011; Rita died at age ninety-seven on September 16, 2018.

Knowing of my strong interest in historical knitting, Natalie shared her mother’s childhood sweater from Sweden, as well as family history and family photographs, with me. Intrigued by the pattern, I set myself the challenge of creating a replica of the sweater for my personal use. 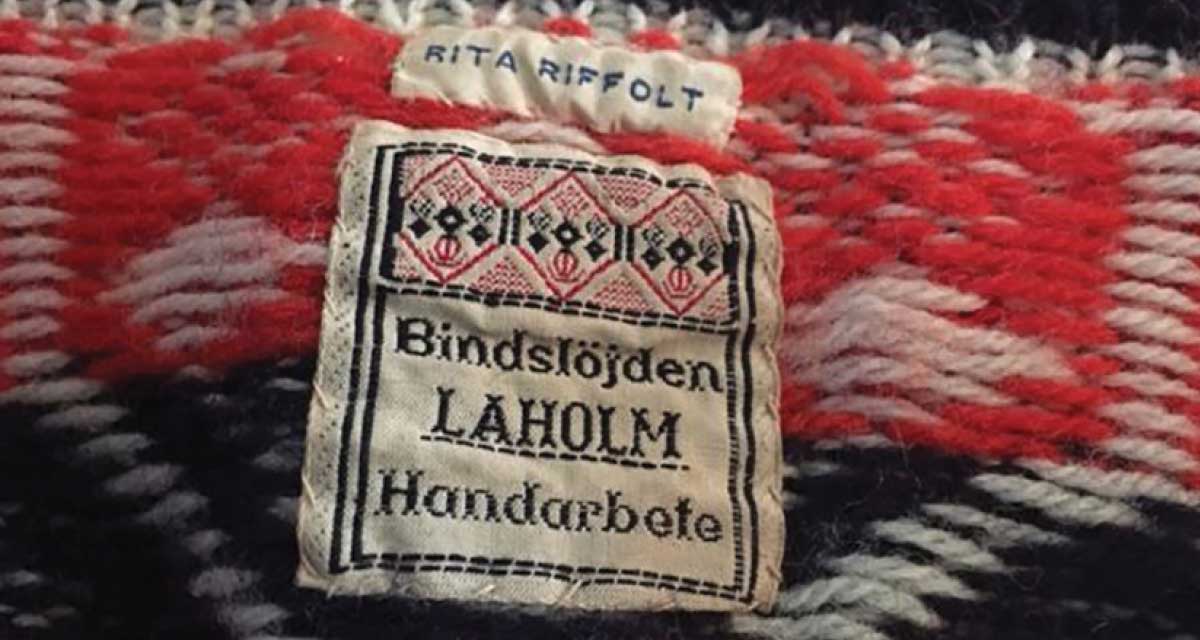 The labels sewn to the inside of Rita Riffolt’s Swedish Bjärbo sweater. The larger one indicates that the sweater was the product of Bindslöjden (the knitting craft association) in Laholm, Sweden. Photograph by Natalie Varney.

I learned that the sweater features the Bjärbo motif (the term Bjärbo refers to a person living on the peninsula of Bjäre on Sweden’s southwestern coast). Rita’s childhood sweater bears a label featuring the Bjärbo pattern and identifying the sweater as the product of Bindslöjden (the knitting craft association) in Laholm.

The Bjärbo motif is a very stylized version of a thistle-like flower with three branches. The flowers are diamond-shaped, usually with a solid diamond topped by a check-pattern diamond. The “flower” is outlined with a hexagonal border and the motifs are staggered vertically and horizontally. The motif almost always is worked with three colors—white for the background with alternating wide horizontal stripes in blue and red.

In addition, Rhoades explains that items knitted with the Bjärbo motif were likely done by the Halland Knitting Craft Association, a handcraft association established by Berta Borgström (dates unknown), the wife of the doctor in Laholm, a city in the county of Halland in southern Sweden. According to Rhoades, Borgström established the Halland Knitting Craft Association, which became part of the umbrella organization for Sweden’s handicraft societies established by Lilli Zickerman (1858-1949), in order “to help women in need and to preserve the local knitting traditions.” 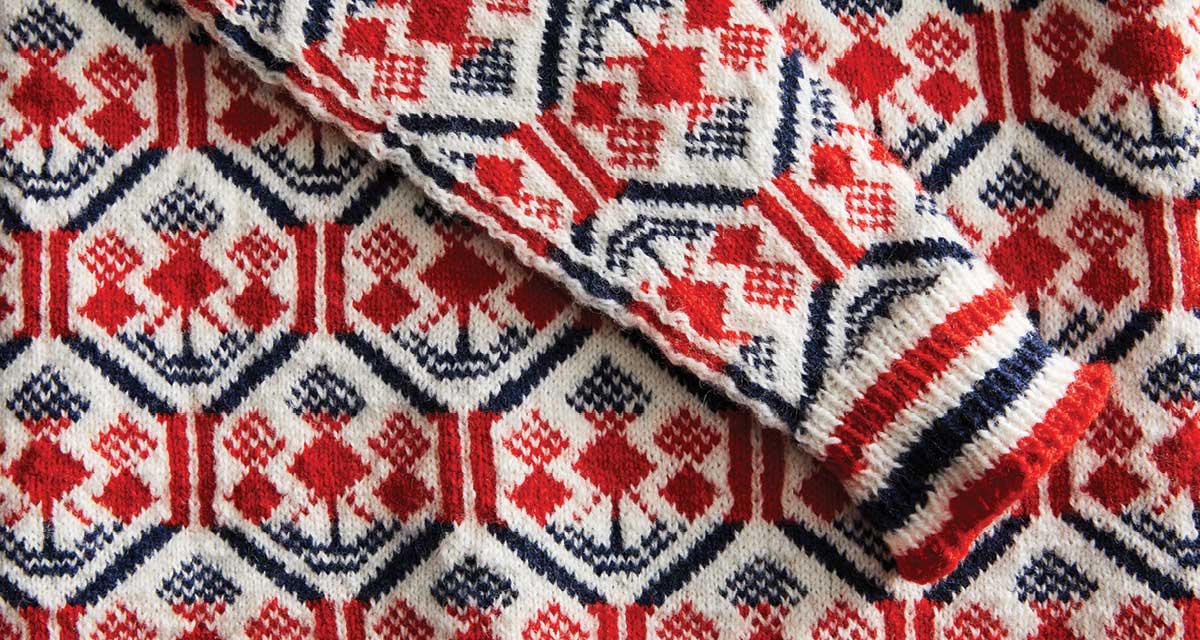 Bjärbo sweaters were traditionally knitted in the round from the waist up. The photographs of Bjärbo sweaters accompanying Rhoades’s article show sleeves that were knitted from the cuff up, so that the direction of the Bjärbo motif on the sleeves matched the direction of the motif on the body of the sweater. However, the sleeves on Rita’s sweater were knitted from the armhole down to the cuff. A Bjärbo child’s sweater in the collection of the County Museum in Halmstad, Sweden, features a similar sleeve construction.

Re-creating a Bjärbo sweater was a knitting challenge. But for me, it was also a way to honor Rita Riffolt Varney and her pride in her Swedish heritage. 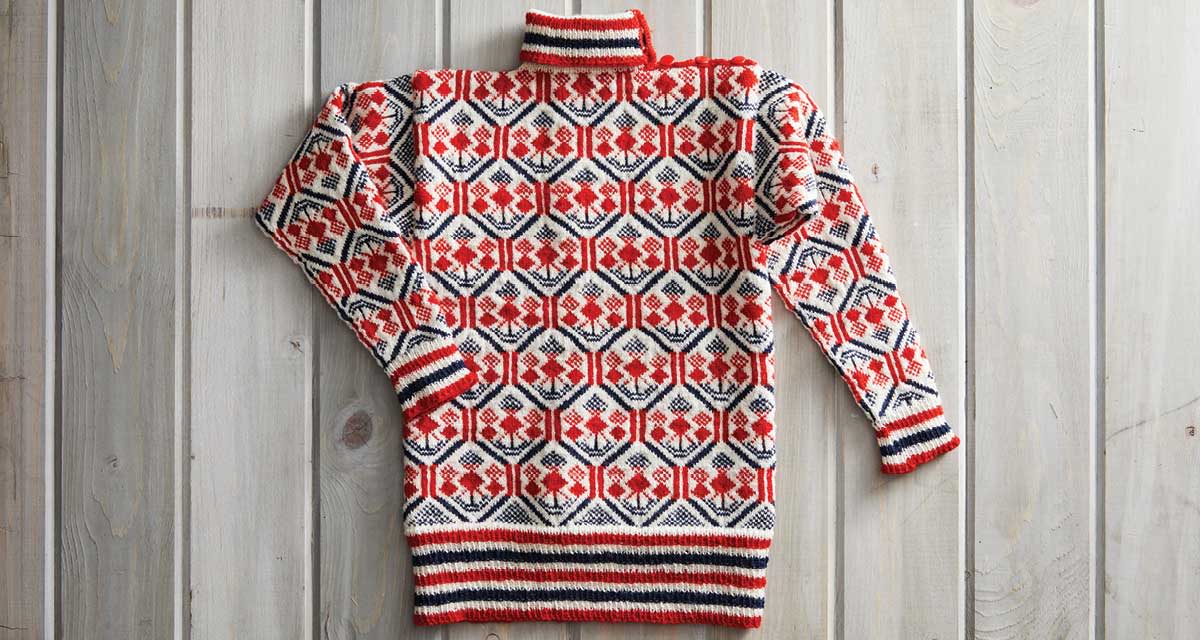 In re-creating Rita’s childhood sweater, I mimicked the sleeve construction of the original. I knitted seven-stitch armhole steeks centered on each side of the body, and dedicated seven body stitches on each side to each armhole. In the round in which I created the steeks, I put the seven body stitches that would form the base of each armhole on a length of waste yarn and then cast-on seven new steek stitches to replace the stitches placed on waste yarn. Thereafter, I continued to knit the sweater body in pattern in the round. However, when I reached each steek, I knitted the steek in a pattern of alternating red and blue stripes, with the two outermost stitches, which formed the steek border stitches, and the center stitch knitted in white, the background color of the sweater.

After finishing each shoulder—the right shoulder with a three-needle bind-off and the left shoulder with a ribbed button band on the shoulder back and plain bind-off on the shoulder front, to which crocheted button loops were later added—I cut each steek down the center stitch and picked up the requisite number of sleeve stitches between the steek border stitches and body stitches, as well as the seven stitches previously placed on waste yarn, and knitted each sleeve in the round down to the cuff. Upon completion of each sleeve, I used a hem stitch to tack down the inner edges of that sleeve’s steek to the body of the sweater and a blanket stitch to secure the bottom and top stitches of that steek to the base of the armhole and the edge of the shoulder, respectively.

Mimi Seyferth, a lawyer who lives outside Washington, D.C., met Rita Riffolt Varney in 1972 when Mimi became the college roommate of Rita’s daughter, Natalie, at Santa Clara University. Mimi has always said that to the extent any of her rough edges were smoothed in subsequent years, she credits Rita, who was a powerful influence—and a great friend.

This article was originally published in the Winter 2019 issue of PieceWork.