Rickrack conjures memories of brightly colored chevron embellishments on dresses and other garments from our childhoods.

Rickrack conjures memories of brightly colored chevron embellishments on dresses and other garments from our childhoods. In the May/June 1994 issue of PieceWork, Interweave founder Linda Ligon gives us the scoop on how this iconic trim was made. Here’s Linda to tell us more.

It has covered the telltale faded lines of letdown hems, lent a bit of inexpensive color to plain sewing, and been fashioned into forgettable household accessories such as hot pads and pincushions. For generations, it has trimmed countless anonymous seersucker sunsuits, muslin kitchen curtains, gingham aprons, and dimity pinafores. It can be found in virtually every sewing and fabric shop in the country in a wide range of colors and sizes, and it's cheap. Yet this cheery, homely, everyday sewing notion called rickrack is a marvel of ingenuity, both in its method of manufacture and in the surprisingly lovely uses to which it has been put over the years.

How Rickrack is Made

Rickrack is a plain flat braid that has had differential tension applied to its strands in a controlled and systematic way while being woven. To understand flat braids, think of a pigtail: a single set of strands which take turns weaving over and under one another. The minimum is, of course, three, but any odd or even number of strands greater than three is also possible. To understand rickrack, think of Pippi Longstocking, the bouncy Swedish storybook heroine with the cock-eyed pigtails. Pulling too hard on one of the strands, slacking off on another can make a braid go off in an unexpected direction. People the world over have been making marvelously complex braids by hand for millennia, including ones that resemble modern rickrack. 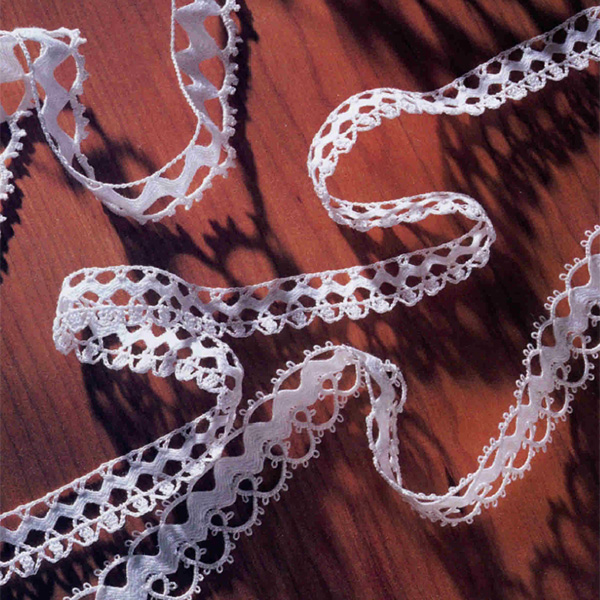 Rickrack takes many lovely forms. Enjoy making the three delicate edgings—two crocheted and one tatted—presented in the companion project “Rickrack Edgings to Make” by Jane Fournier, which is also available in the May/June 1994 issue. Photo by Joe Coca.

Now imagine the machine that can do the same thing: handling a dozen or two fine threads at a time, weaving each one across the others in turn, pulling harder on this one, easing up on the next. What a rickrack braid machine most resembles is a cross between a maypole dance and a carnival ride, with upright yarn bobbins do-si-do-ing around each other while tracing back and forth on a large arc. Eric K. Hall, vice-president of manufacturing at Trimtex, a company in Williamsport, Pennsylvania, that has been producing braids and trims since 1919, describes the process of making rickrack in the following way:

If this description doesn't make the process perfectly clear, it's no wonder. The Rube Goldbergian device that is a braid machine would have to be seen in action to be truly appreciated. The several hundred such machines at Trimtex were imported from Germany about the turn of the century and are still in good working order, turning out plain-weave and twill rickracks in cotton, linen, jute, rayon, metallics, and synthetic fibers of all descriptions, in widths ranging from ¼ inch or less to more than 2 inches. Similar machines have been manufactured in this country, too, but producing braids mechanically may go back as far as the fourteenth century, when the braiding device would have been fashioned of wooden wheels and cogs and powered with a hand crank.

To read the rest of Linda Ligon’s article, “Rickrack: Make Plain Things Beautiful,” or make the “Rickrack Edgings to Make” by Jane Fournier, shown above, download a copy of the May/June 1994 issue of PieceWork.