Peek inside the contents of hundreds of suitcases found in the Willard Asylum, revealing remnants of the lives left behind.

In the July/August 2011 issue of PieceWork, we published a story about the "Threads of Feeling" exhibition at the London Foundling Museum. Threads of feeling refers to the identifying object a mother left with the baby when she gave it up to the Foundling Hospital. These “tokens” were often a swatch of fabric, perhaps cut from her own clothing and pinned to the baby’s admission form with a detailed description. As the hospital recorded neither the mother’s nor the child’s name, the pieces of fabric would serve as identification in case the child was later reclaimed. Most were not.

I was reminded of Threads of Feeling when I read Carin Marais’s article “The Embroidered Dress of Willard Asylum” from the PieceWork Fall 2022 issue. This dress was discovered in one of the many forgotten suitcases left behind at the Willard Asylum. Scrolling through images of the asylum residents’ suitcases and their contents, I recognized again the found fragments of a life that tell the story of one almost forgotten.

I’ll admit to spending a lot of time viewing photographer Jon Crispin’s online images of the suitcases. He began photographing the suitcases in 2011 and has taken thousands of photographs, documenting each one and its contents. Some images show a simple, worn suitcase or trunk. Others reveal the contents of the suitcases, which include everything from shoes and books (The Diamond Guide for the Stranger in Paris or Hand Sketches of the Panama Canal), to curling irons and ashtrays, diaries, piles of buttons, birth certificates, Christmas cards, photographs, or the disturbing Dr. Charles Flesh Food (“to make the breast firm, large and beautiful nothing can equal it"). 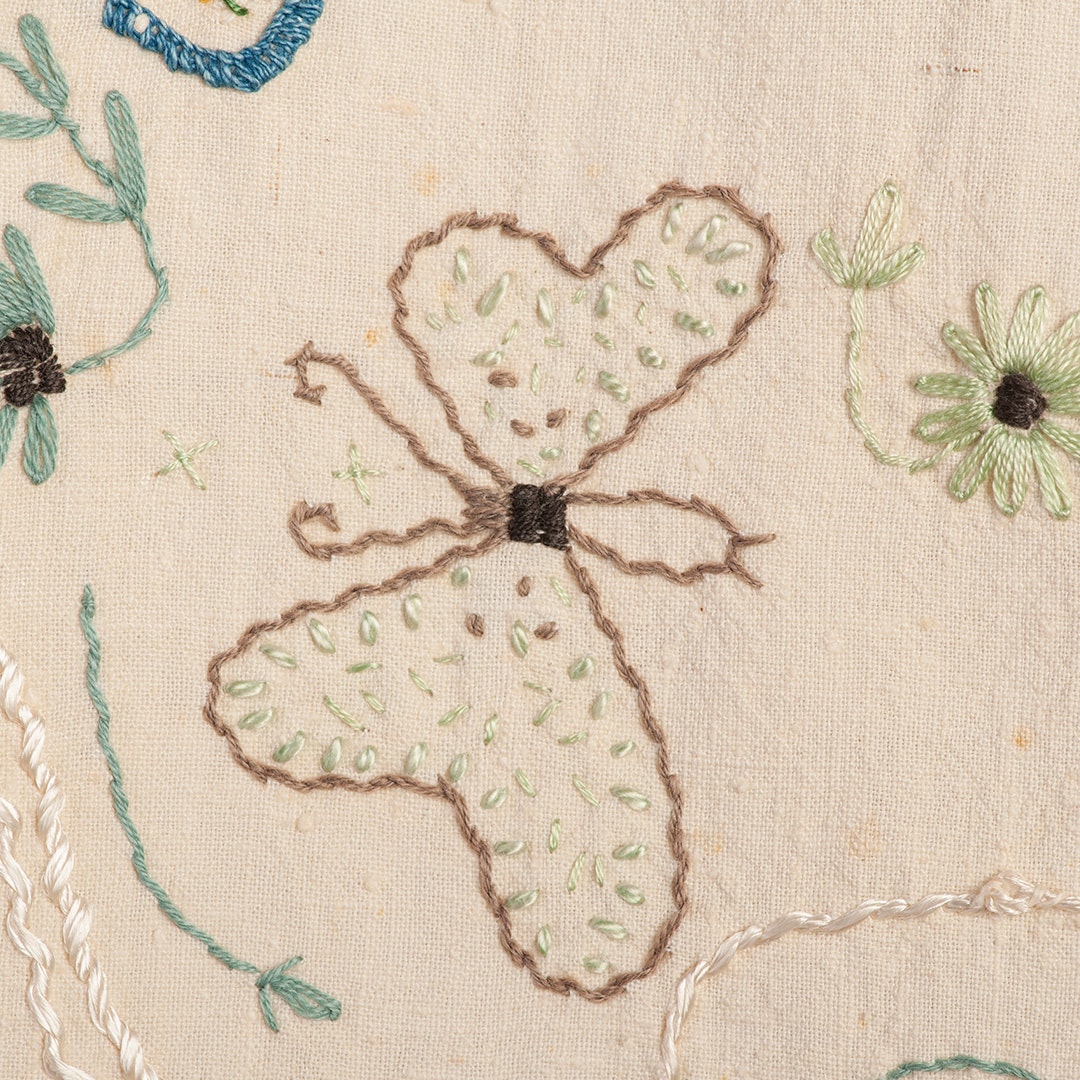 This butterfly is one of many motifs on the embroidered dress that’s the subject of Carin Marais’s article.

I could not stop looking at the photographs. In part, it’s the way Crispin invites you into the suitcases, juxtaposing disparate items, cleverly creating small, intimate scenes from the varied contents. I began to imagine the stories of the Willard residents, started piecing together some of their lives from photographs and diary entries. I puzzled over the design on an ornate beaded bag resting on a fur-collared genuine “Persian Kurl” coat. Ethel S’s suitcase contained a quantity of teaspoons—one with her name engraved—along with a knitted baby bonnet, and a smocked dress with gorgeous lace trim. Crispin displays these against her bible opened to the Judgement of Solomon and incorporates Ethel’s (we assume) notes on the “Plagues of Egypt.” 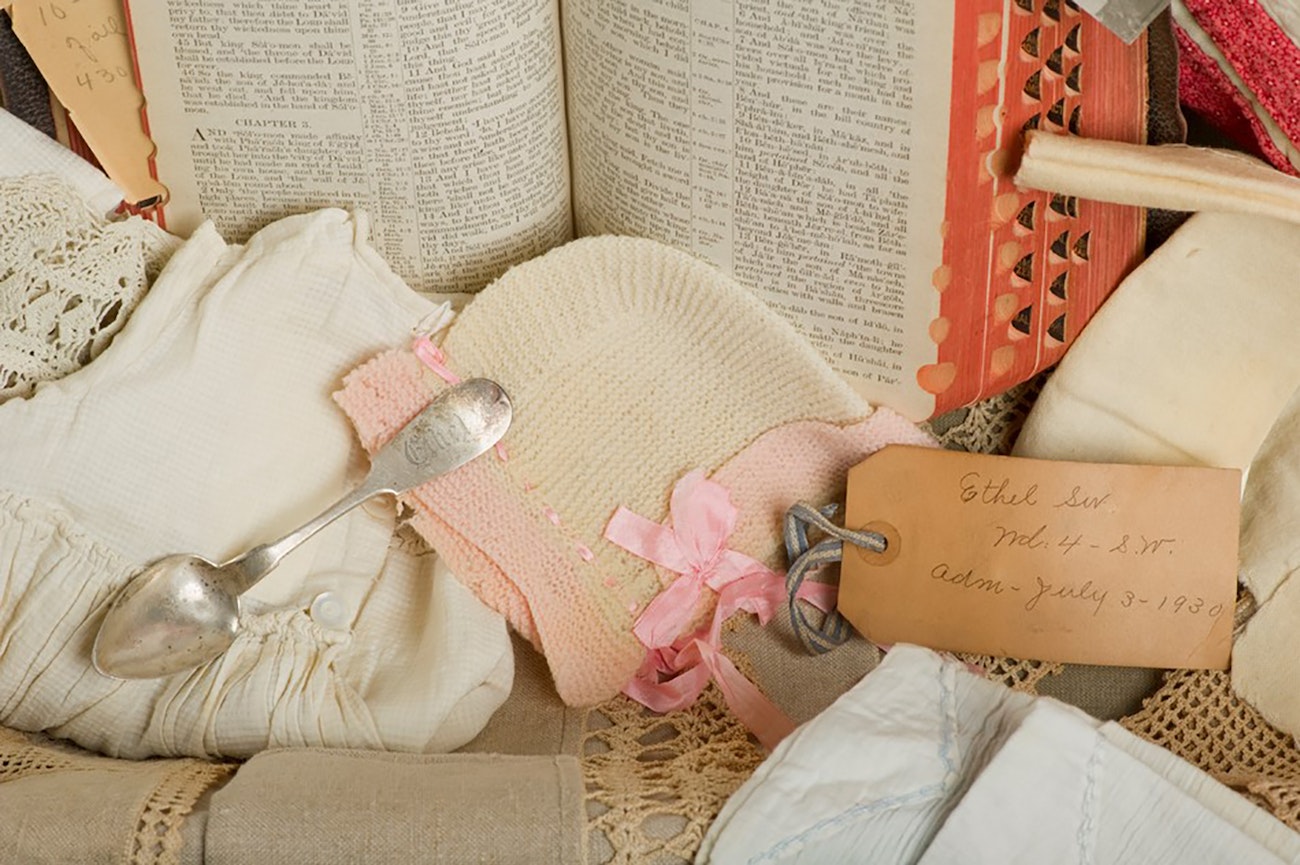 Some of the contents of Ethel S.’s suitcase

It’s curious how I strived to piece together a life’s story from the found objects in an old suitcase. Piecework of a different sort, I suppose—gathering remnants to tell a story that might otherwise be utterly lost. And as we gather, don’t we also wonder how the pieces of cloth cut from our own lives identifies us?

A suitcase makes us think of travel and adventure. A happy vacation, a brief respite from our busy lives. Yet these suitcases were the opposite. They were stored away after the last stop, never to be used again. But because of Jon Crispin’s artful and meaningful documentation, they will not languish forgotten. The suitcases and their owners travel on.

To learn more about the Willard Suitcases project visit John Crispin’s website and Instagram @willardsuitcases and read his blogposts about the suitcases.

Karen Brock is a contributing editor of PieceWork magazine.