Punto Antico (antique stitch), a type of Italian drawn-thread work, is thought to have its origins in the Levant. The geometric shapes are said to be inspired by the Arab influence that dominated the island of Sicily for centuries.

Punto Antico (antique stitch) is a type of Italian drawn-thread work similar to Hardanger that usually is worked on evenweave fabric. I first encountered the technique when a cyber friend in Italy sent me an issue of the Italian needlework magazine Rakam containing not only a how-to section on working Punto Antico in several colors but also photographs of table runners worked in ecru on ecru (I preferred the latter, monochromatic version). Intrigued, I ordered a subscription.

The characteristic geometric motifs of Punto Antico are believed to have arisen from the centuries-long Arab domination of Sicily. The term “Punto Antico,” however, first appeared early in the twentieth century to describe counted-thread embroidery worked using a particular suite of stitches (see “Punto Antico Stitches” at the end of the article. 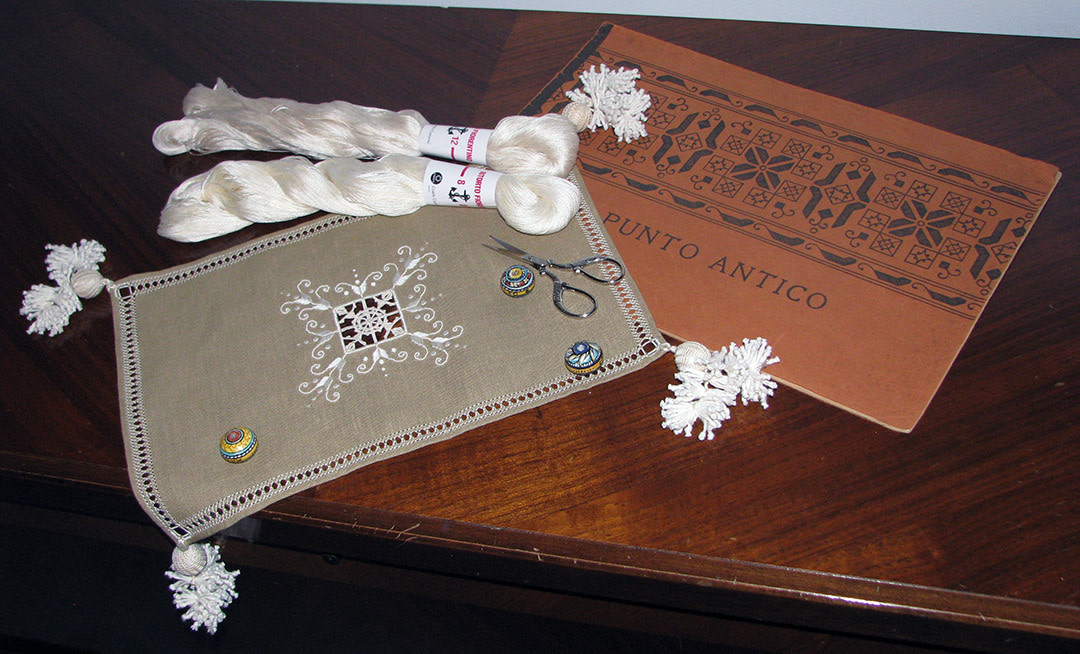 One of the author’s completed pieces worked in Punto Antico. Cotton on linen. Canada. 2007. Photo by Rachel Robertson

Today, Punto Antico, often combined with Punto Tagliato (cutwork), typically is worked on 36- or 38-count linen, using size 8 pearl cotton for the solid designs and size 12 for the openwork. Unlike those of Hardanger, the openwork shapes of Punto Antico are outlined in either double running stitch or backstitch, and then the center of each shape is cut diagonally to form an X from corner to corner. The resulting flaps are folded to the back of the fabric and secured with Punto Cordoncino (cord or overcast stitch) worked over the top and enclosing the double running stitch outlining the open area; the excess fabric is then cut away.

Punto Riccio (curl stitch) is executed by wrapping, then overcasting a line of stem, cable, or running stitches to create raised curls of thread that stand out from the fabric: A line of stitches is first wrapped by going under each stitch (without entering the ground fabric) to smooth out curves; then the line is overcast (again, without entering the ground fabric) with perpendicular stitches laid side-by-side to cover the whole line so that it ends up looking like a row of coils. 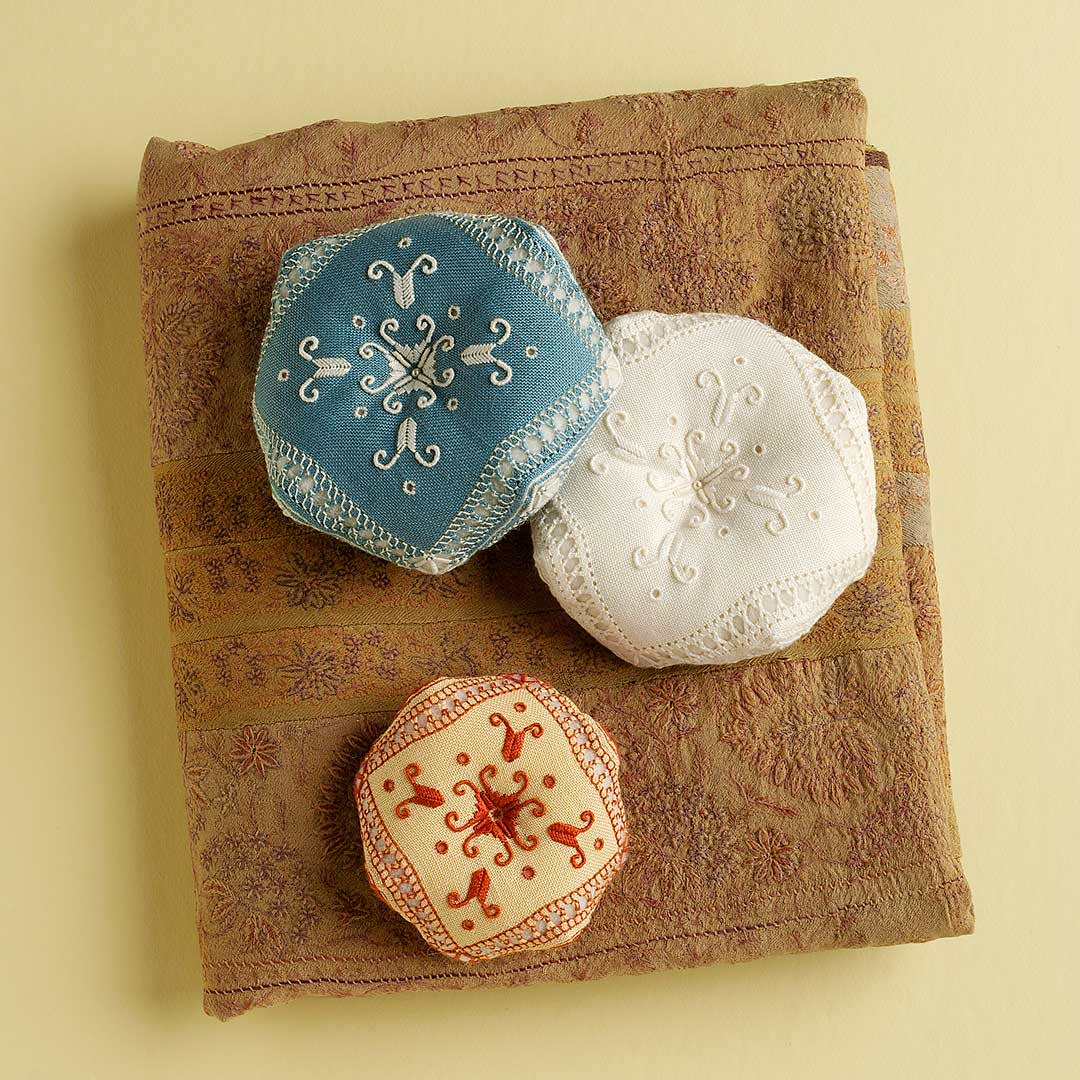 Another characteristic of Punto Antico is hemstitching: Single, double, and triple rows of Punto Gigliuccio (peahole hemstitch) are worked around the hemlines, and single rows join design elements within the central parts of the embroidery. In earlier examples, the open areas are small individual or groups of squares or diamonds. In later ones, larger openings were made and filled with more complex needle lace. Older pieces of Punto Antico embroidery are richly textured, having stitches over nearly the entire surface of the linen. Modern works tend toward designs that are more spacious.

Describing a seventeenth-century tone-ontone sampler in her book Ricami Italiani Antichi e Moderni [Italian Embroidery Ancient and Modern] (1925; reprint, Bologna, Italy: Nuova S1, 2006), Elisa Ricci writes, “The relief of the Curl Stitch and the Satin Stitch, in contrast with the transparencies of the pulled stitch and the Reticello gives liveliness and variety to the work, and in the uniform whiteness, nearly the effect of color.” (This sampler was worked on high-count linen, not the evenweave fabric seen today.)

Because later issues of Rakam did not contain a detailed how-to section, I had to find another way to learn to do Punto Antico. A member of my local stitching guild referred me to Renate Fernau’s book Schwalm Embroidery (Berkeley, California: Lacis, 2000); I used that to learn Punto Gigliuccio. Others showed me how to do some of the stitches, which they recognized from the photographs in Rakam as classic embroidery stitches. My first project was a small doily with mainly geometric designs and very little openwork, but I was hooked. Searching the Internet for more information, I came across the website of Christine P. Bishop, an Australian needlework teacher and the author of several articles on Punto Antico. I was able to acquire these either from the publisher or on eBay. 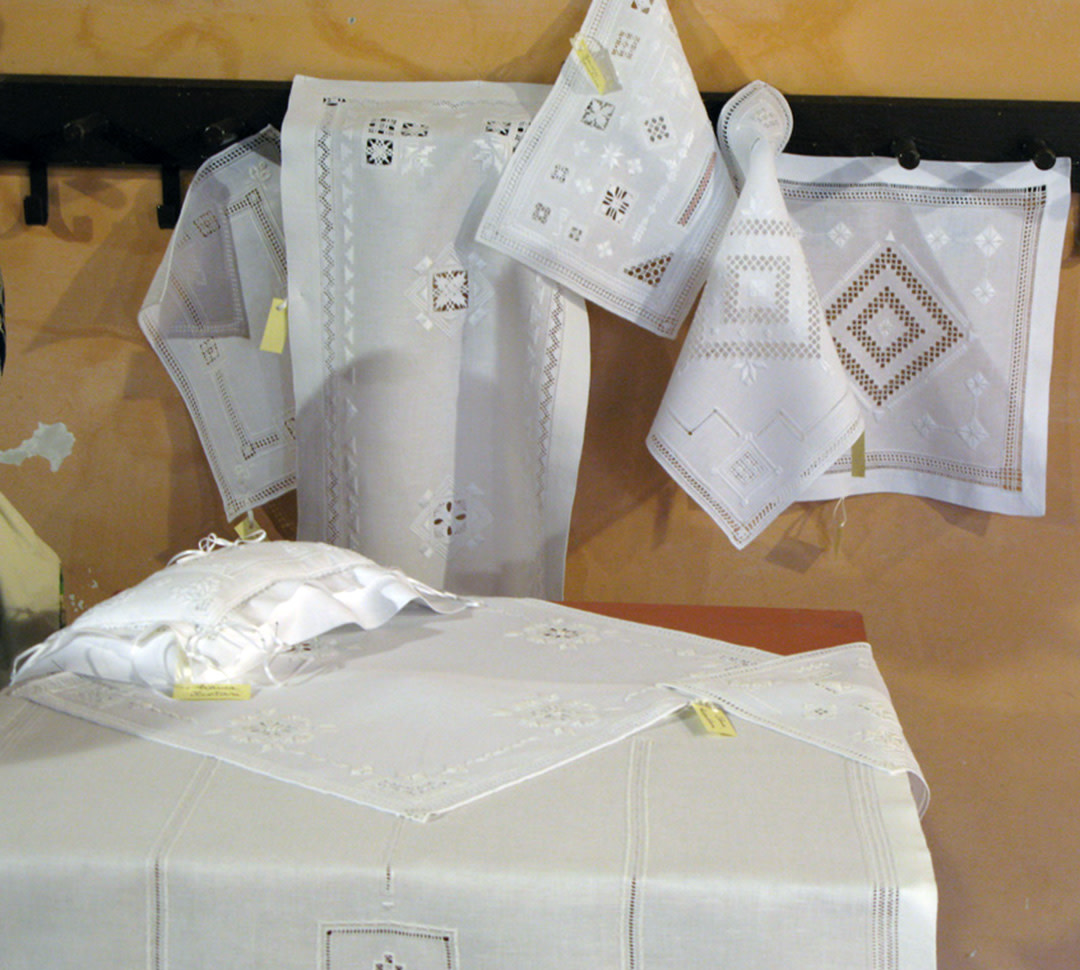 In 2004, I attended the American Needlepoint Guild National Seminar in Reno and took two Italian needlework courses taught by Vima deMarchi Micheli, an American needlewoman of Italian heritage who specializes in Italian needlework (see “A Fragment of Sicilian Cross Stitch,” PieceWork, March/April 1998). Vima has written more than twenty-five instructional books and owns an amazing collection of antique and modern pieces of Italian embroidery, much of which she showed us at the seminar. Vima is a generous and tireless teacher who knows all kinds of people and places, books and workshops.

Through an Italian embroidery message board on the internet, I learned of Bruna Gubbini’s book Il Punto Antico [Openwork Embroidery] (Bologna, Italy: Associazione il Punto Antico, 2001). I was pleasantly surprised to find that it includes an English translation, as my knowledge of Italian didn’t include any needlework terminology at that time.

Originally, Punto Antico primarily was used to embellish ecclesiastical textiles and household furnishings such as table linens, curtains, pillows, and bed linens. Today it is used as well on wall hangings, lampshades, sachet bags, and Christmas tree ornaments. Made with a keen eye, the best examples of Punto Antico imitate the bas-relief of architectural designs as well as the renaissance technique of chiaroscuro, in which a third dimension is suggested by contrasting dark and light areas. 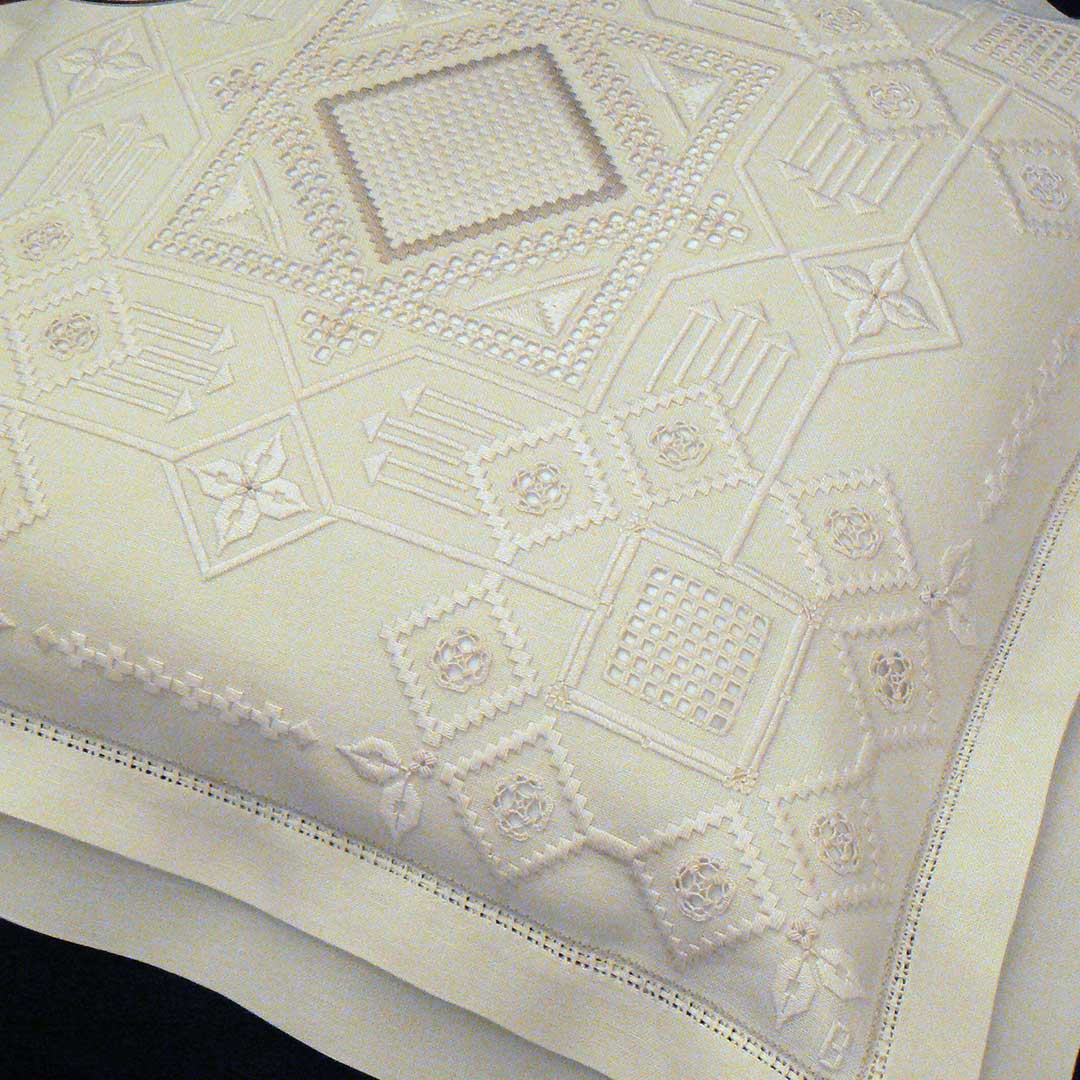 Jeanine Robertson lives near Vancouver, British Columbia. She has been researching Italian needlework for many years.

This article was originally published in 2008.