Practical Socks in the 5th Century

Here is an excerpt from Charlotte Booth’s article, “Re-Creating Ancient Egyptian Socks,” from the November/December 2011 issue of PieceWork.

Here is an excerpt from Charlotte Booth’s article, “Re-Creating Ancient Egyptian Socks,” from the November/December 2011 issue of PieceWork:

“Between October 2009 and March 2010, the Petrie Museum of Egyptian Archaeology in London began an experimental archaeological project called “Sock It!” Funded by the Museums, Libraries and Archives Council (MLA), the project’s goal was to reproduce the circa A.D. 400 to 500 two-toed Coptic (Egyptian) socks from the Petrie Collection . . . using ancient techniques and to create a pattern enabling others to reproduce them. . . . The Petrie Museum socks were discovered in a tomb at Hawara in 1888, along with parts of an ivory-paneled box, a glass phial, and several embroidered textiles. They are made from reddish-brown wool and are formed of several sections joined with neat seams around the heel and the front. . . . In comparison to knitting today with five straight or even circular needles, the looping technique used to make the socks was a complicated and time-consuming process. It, however, required very little material—an ordinary large-eyed needle and short lengths of wool. . . .” (The looping technique has several names: “knotless netting, needle coiling, or nålbinding.”)” 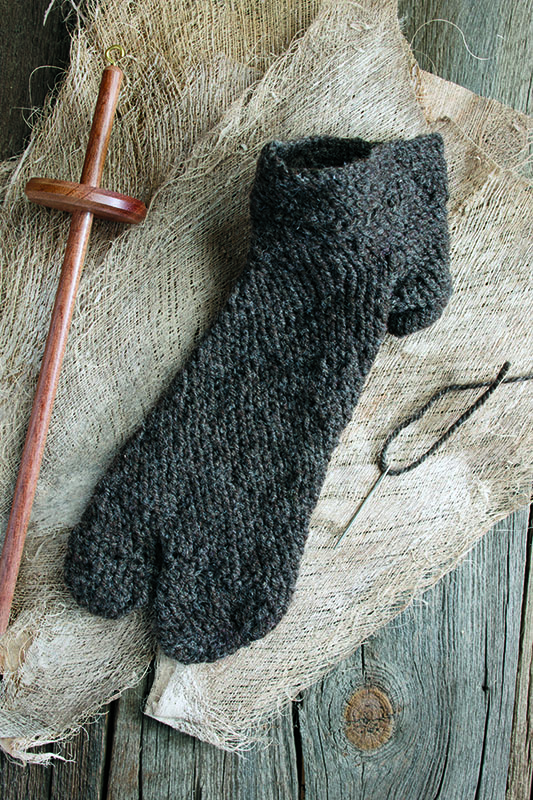 Coptic sock created by Charlotte Booth. She based her instructions on the material developed in a project that re-created socks from the Petrie Museum of Egyptian Archaeology’s collection. Included in the photo is a drop spindle that was used in the project to spin some of the fleece and a large-eyed needle threaded with wool—the only material needed to make the sock.
Photo by Joe Coca.

In addition to her fascinating article, Charlotte also provided the step-by-step instructions for making the socks; a great way to learn a new technique—one that almost certainly predates knitting. While the socks in the “Sock It!” project were made with handprocessed and handspun wool, the project instructions were adapted for a commercially available yarn.

Charlotte’s project sock is shown here. Here’s a link to a photograph of the original pair in the Petrie Museum of Egyptian Archaeology. (To view image: type in the accession number: UC16766 in the Search box and click Search.)

Get your new old socks on! Check out this issue of PieceWork.
Jeane