The Scottish samplers in an exhibition at the Museum of Scotland in Edinburgh are part of the Lesley B. Durst collection.

The Scottish samplers in an exhibition at the Museum of Scotland in Edinburgh are part of the Lesley B. Durst collection. According to Leslie, an American sampler collector, who I met at the exhibition, the exhibition’s title, Embroidered Stories, is the perfect way to describe the samplers.

As pieces of embroidery, the samplers are absolutely delightful, but the information alongside each sampler also opens up a window onto the life of the maker. There are even two unframed samplers displayed so that it’s possible to study both the back and front of the embroideries. Is there an embroiderer out there who doesn’t like to look at the back of a piece of work?

One of the most unusual samplers, still mounted on its original blue board, demonstrates skills known as plain sewing. Made by Jane Howse in England in 1840, the stitched samples include hemming; tucking and whipping; felling; gathering and fixing gathers; buttonholes, making buttons, and sewing them on; herringbone stitch; darning; and marking. These were the basic skills necessary for ordinary domestic tasks, but because the uses of the stitches were so humdrum, this type of sampler wasn’t usually worthy of display. 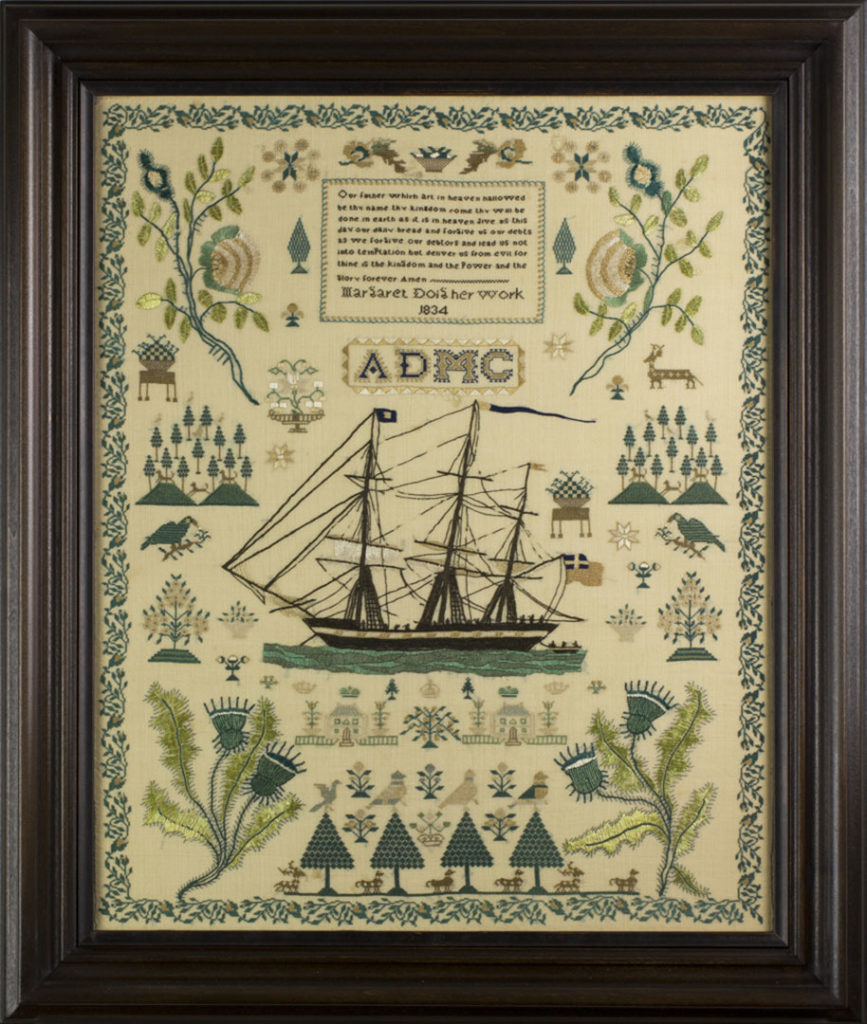 Sampler stitched by Margaret Doig in 1834. Silk on linen. 21 x 17 inches (53.3 x 43.2 cm). Born in Dundee in 1820, Margaret was one of at least nine children of Alexander Doig and Margaret Christie, whose initials are included on the sampler. Private collection of and © by Leslie B. Durst. Photo courtesy of the Museum of Scotland.

The decorative samplers tend to be much more eye-catching, and it’s difficult to choose a favorite. I used to live in Dundee, a city on the east coast of Scotland, so perhaps that’s why I’m drawn to Margaret Doig’s sampler, but the threads, which are still incredibly lustrous, definitely make this an attention-grabbing piece. The whaling ship at the center of the piece, complete with a small rowing boat with figures in it, harks back to an age when this lucrative but dangerous industry was important to so many coastal towns. By the time Margaret stitched her sampler in 1834, however, whaling was already in decline. 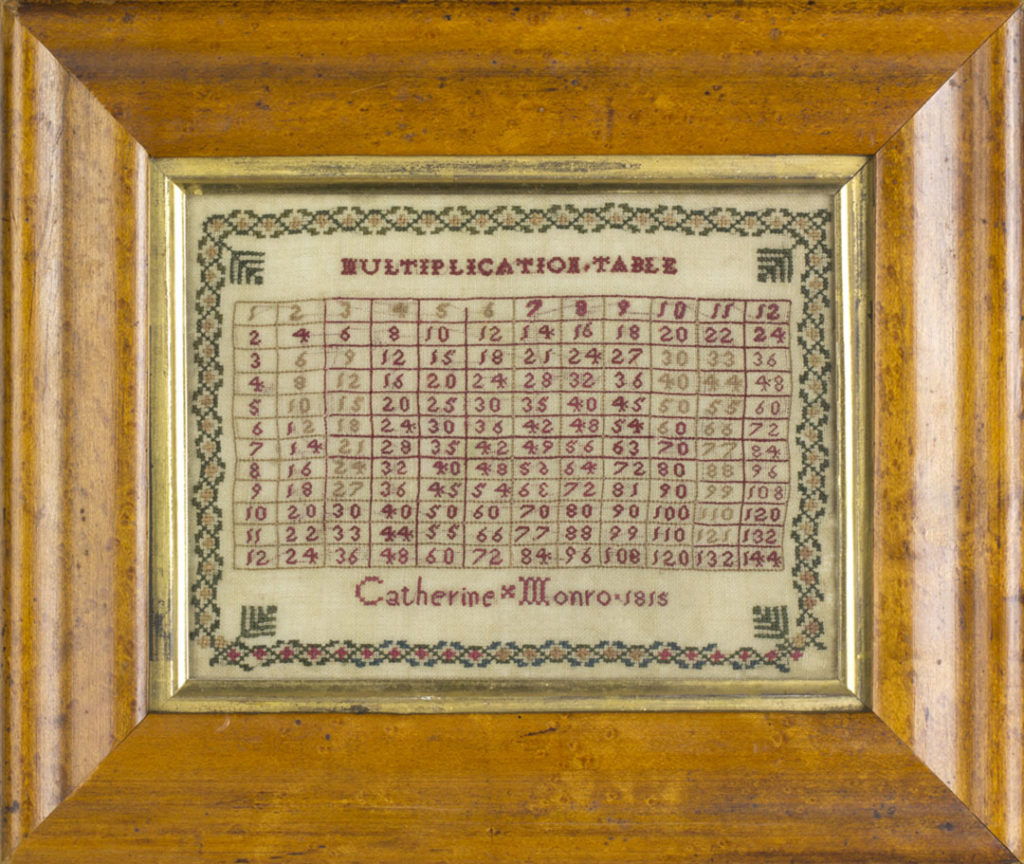 The multiplication table stitched by Catherine Monroe when she was about eleven years old is comparatively simple, but a closer look reveals that a couple of the numbers in the eight- and nine- times tables are stitched back to front. Was this a simple mistake made by the stitcher? Or was she perhaps copying from something that showed them this way? 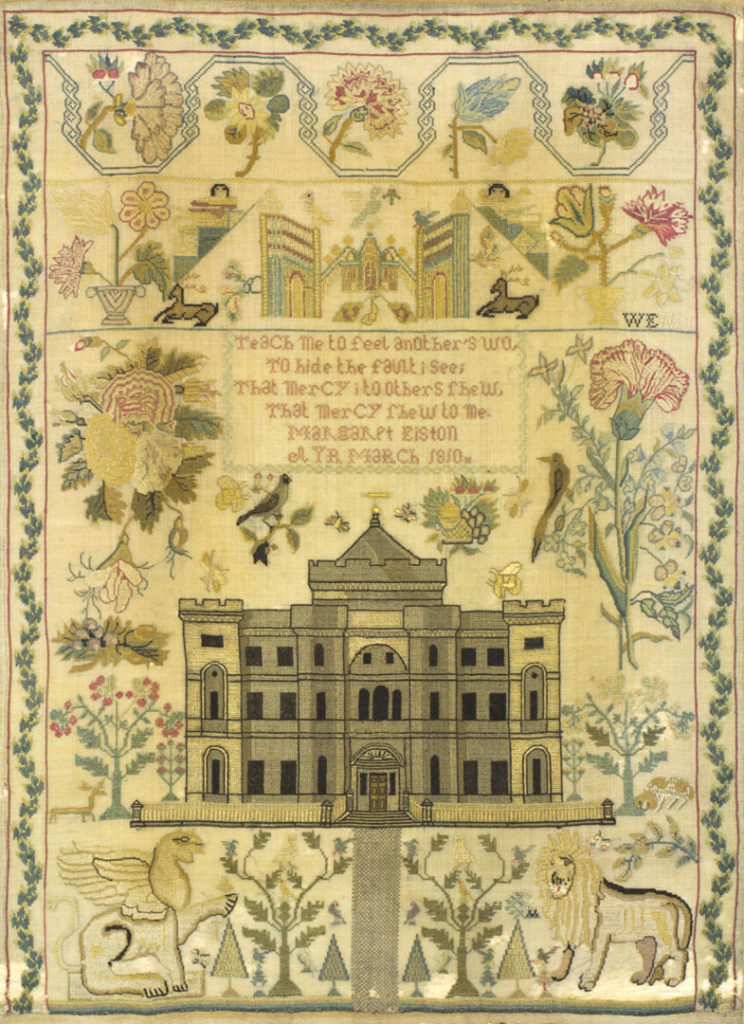 Sampler stitched by Margaret Eistonin 1810. Silk on linen. 21 x 15 inches (53.3 x 35.6 cm). Margaret had two sisters and two brothers. Private collection of and © by Leslie B. Durst. Photo courtesy of the Museum of Scotland.

The sampler made by Margaret Eiston from Ayr in 1810 is fascinating as it shows a very detailed, but incorrect, rendering of Dalquharran Castle in Ayrshire. The building in the sampler was based on a drawing by the architect Robert Adam, but the information explains that the castle was not built as shown; instead, the building in the sampler is based on a drawing produced by Adam’s office but never published, and the original drawing was torn out of the album of drawings. Interestingly, genealogical research revealed that Margaret’s father was a mason and lived at that time just a mile from Dalquharran and may, in fact, have been working on the building, so perhaps the missing drawing had somehow come into his possession. 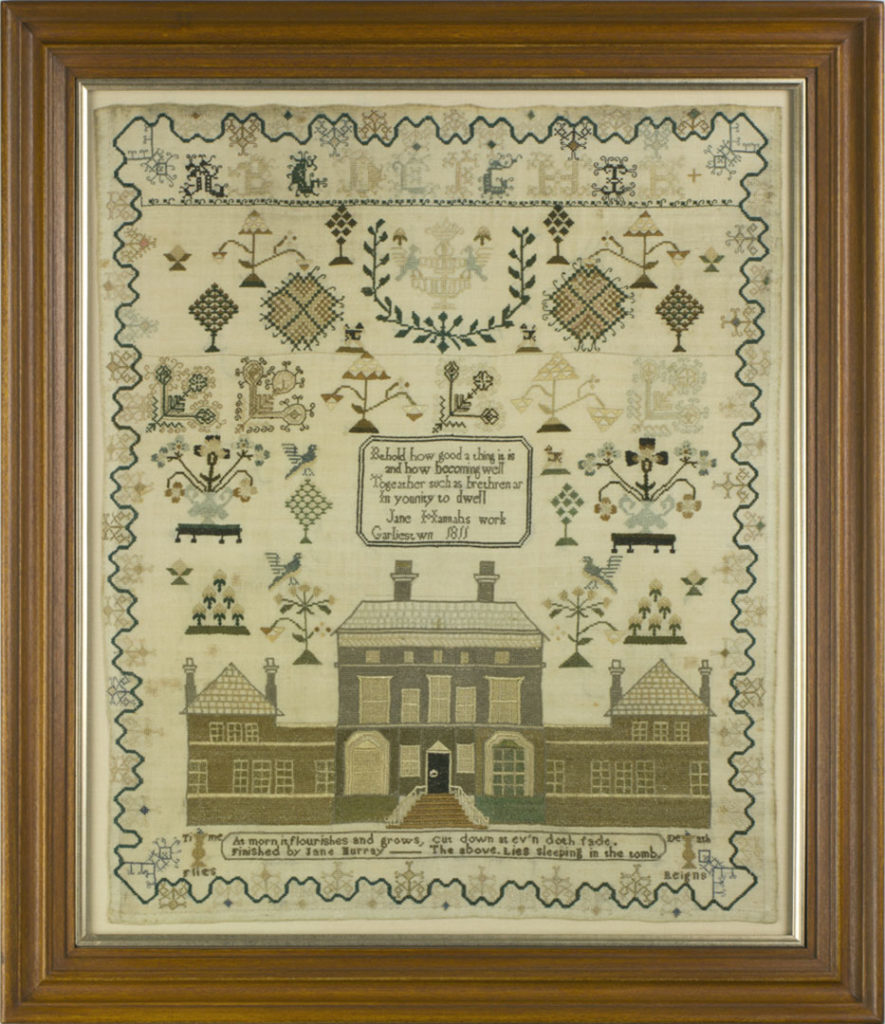 Sampler stitched and dated (1811) by Jane Hannah, who died before the sampler was finished; it was completed by Jane Murray. Silk on wool. 19 x 16 inches (48.3 x 40.6 cm). This sampler is a touching record of a friendship. Private collection of and © by Leslie B. Durst. Photo courtesy of the Museum of Scotland.

A sampler by Jane Hannah and Jane Murray is very poignant. It is signed “Jane Hannah’s work Garliestwn 1811,” but below it, a further inscription reads “Finished by Jane Murray—The above. Lies sleeping in the tomb.” Jane Murray has also added two sundials, symbolizing the passage of time with the words “Time Flies” and “Death Reigns.” Mourning samplers were often used to mark the death of a loved one, but this sampler was not begun as a mourning sampler and is a touching record of a friendship.

All of the samplers have stories to tell and the lives that the genealogical research reveals is absolutely captivating. I began my visit expecting to look at some interesting embroideries, but the stories coupled with the beautiful stitching have captured my imagination and, at the time of writing, I’ve already visited the exhibition twice, and I’m sure I will return many times before the exhibition ends in April 2019.

I’ll never look at a sampler the same way again.

Kathy Troup, born in the north of England, has lived in Scotland for many years. She edited a U.K. published stitching magazine for seventeen years and continues to write about the subjects she loves.

Embroidered Stories: Scottish Samplers is at the Museum of Scotland in Edinburgh until April 21, 2019. Curator Helen Wyld wrote a companion book, and it is available from the museum shop.

More than 1000 samplers in the Leslie B. Durst collection can be viewed on the collection website. The images are excellent and include the information and story of each sampler. To view any pictures, you need to sign up as a member, but membership is free.

On one of my visits to the sampler exhibition, I had the privilege of interviewing Leslie B. Durst for a feature article on her collection and many of the samplers from the exhibition. “Embroidered Stories: The Lesley B. Durst Sampler Collection appears in the Summer 2019 issue of PieceWork.