The Summer 2019 issue of PieceWork focuses on knitting. The history behind each article and project is truly captivating and illustrates the serendipitous nature of knitting around the globe and across time.

Mimi Seyferth’s exquisite Baby Jacket to Knit is a perfect example of the intersection of inspiration and design. Photo by George Boe.

The Summer 2019 issue of PieceWork has several articles and projects that focus on knitting. The history behind each is truly captivating. And each illustrates the serendipitous nature of knitting around the globe and across time. If you love knitting, this is an issue you won’t want to miss.

We start off with Mimi Seyferth’s “Sock Knitting during the Golden Age of Danish Painting” and her lovely companion Danish Nattrøjer Socks to Knit project. That knitting was the focus of many Danish portraits painted during the mid-nineteenth century was a surprise to me. Next up is an excerpt from PieceWork contributor Lita Rosing-Schow’s new book, Strik fra Verdens Tag [Knitting from the Pamirs]. This explores knitted stockings from 1898 and 1899 discovered during an expedition to the “Roof of the World.” And then there’s the knitted baby jacket project that graces the cover of this issue and is shown above. Mimi took her inspiration for this project from a very unusual source. The following is from Mimi’s companion article, “Luisa Sanfelice: Martyr of the Parthenopean Republic”: “Luisa Sanfelice (1764–1800) is known as the martyr of the Parthenopean Republic, a French-supported republic that briefly governed the Kingdom of Naples between January 21, 1799, and June 21, 1799. . . . Ferdinand IV ordered that Luisa be returned to Naples, where she was brought to the executioner on September 11, 1800.” 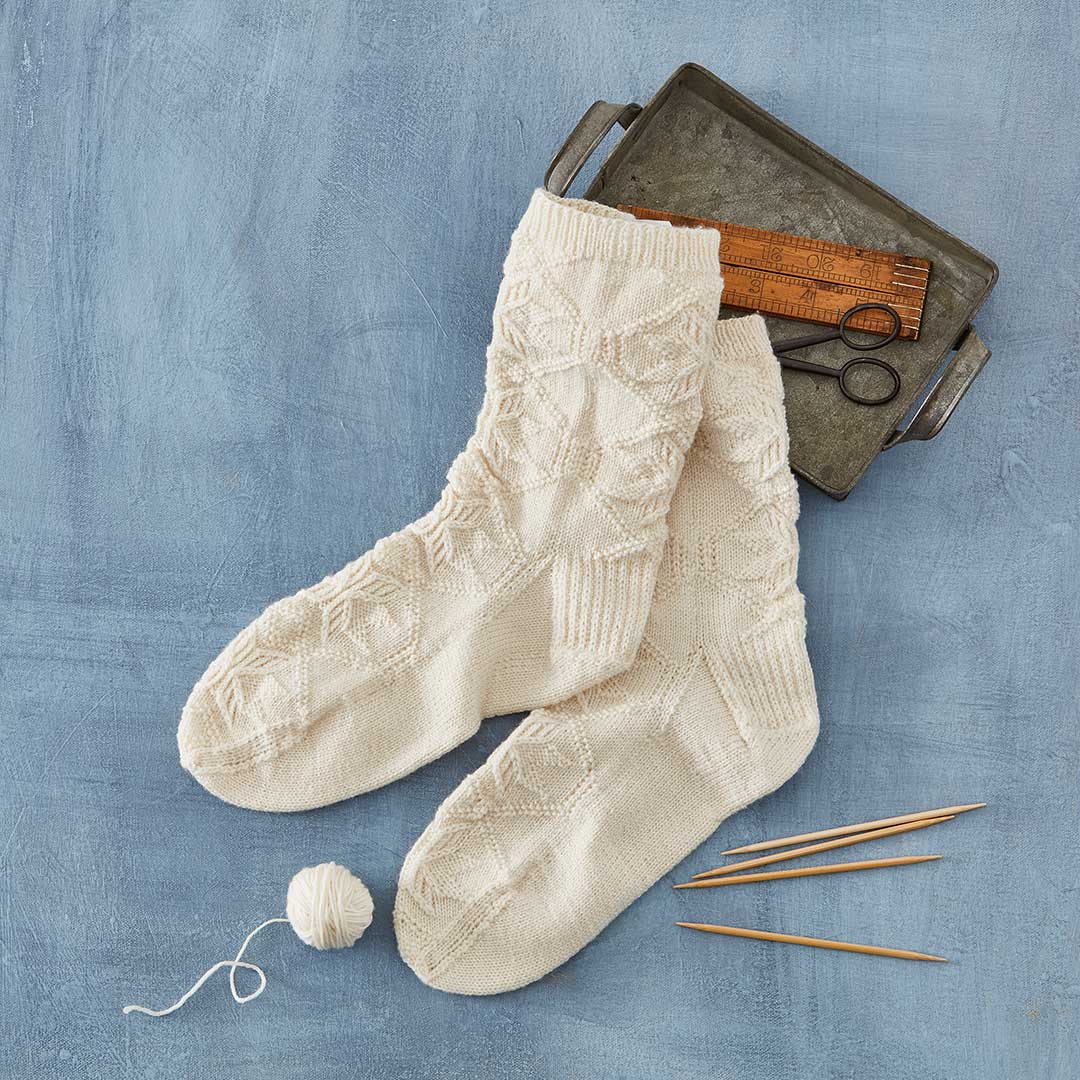 In this project, Mimi Seyferth pays tribute to all of the nineteenth-century Danish painters who included sock knitting in their portraits; also included is the star motif common to the Danish nattrøjer, a traditional knitted garment worn by Danish peasant women in the nineteenth century.

Here’s Mimi Seyferth to introduce her project: “Although the socks in nineteenth-century Danish paintings appear to be knitted in plain stockinette stitch, I wanted to design a patterned sock for a companion project to my article. Accordingly, I turned to the star motif common to the Danish nattrøjer, a traditional knitted garment worn by Danish peasant women in the nineteenth century.

“The pattern of a traditional nattrøjer features eight-pointed stars centered in diamonds formed by intersecting oblique lines. In this project, cabled eight-pointed stars are centered in narrow hexagons created by truncating the sides of diamonds; the trimming of the sides of the diamonds was necessitated by the limited circumference of the sock. The project is knitted in white yarn, the yarn color that appears in most Danish paintings showcasing sock knitting.” 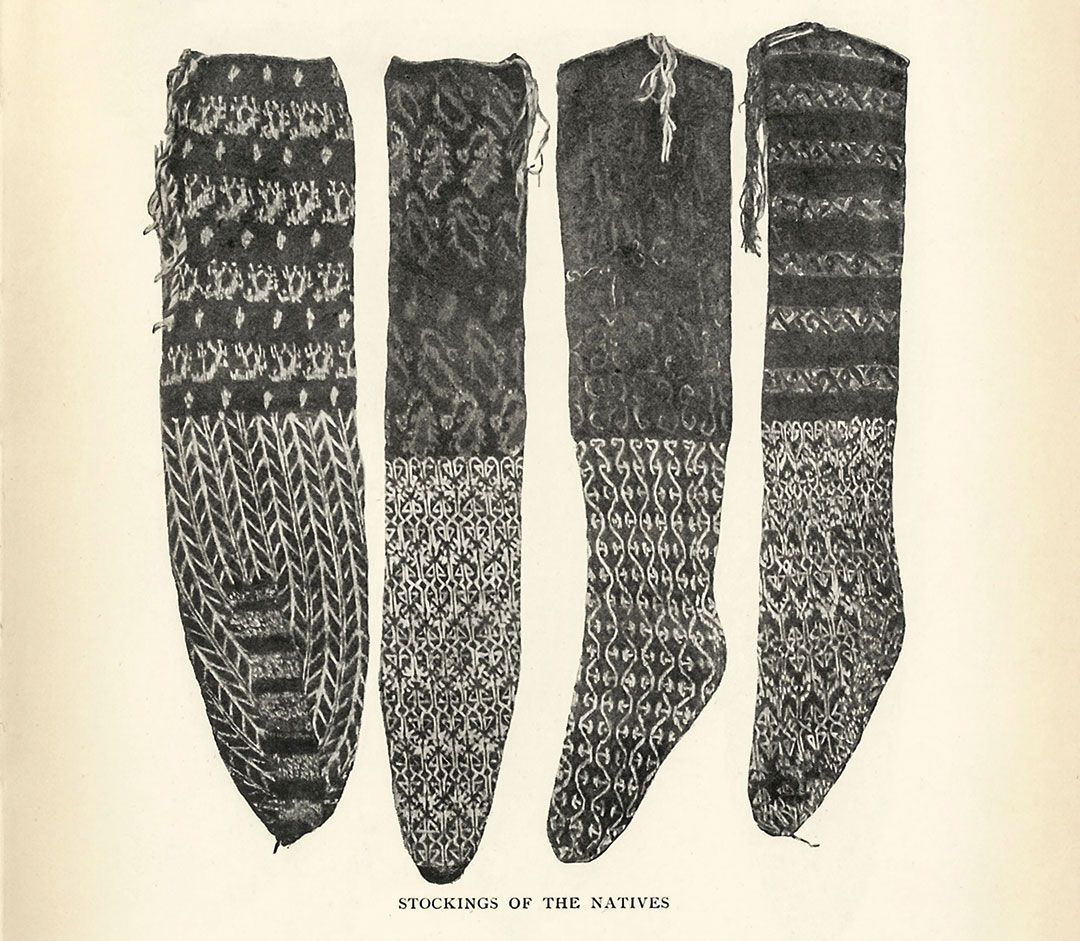 Four stockings from the collection brought home to Denmark by Ole Olufsen from his expedition in 1898–99. From Through the Unknown Pamirs, The Second Danish Pamir Expedition 1898–99 by Ole Olufsen published in 1904. Photo courtesy of Forlaget på Tredje.

Knitting from the Pamirs

Lita Rosing-Schow retraced the steps of Danish explorer Ole Olufsen’s second expedition in 1898 to southern Tajikistan. Lita explains how her adventure began in her foreword: “This book is dedicated to Henriette Hauser. Her maiden name was Paulsen and she was the granddaughter of the botanist, Ove Paulsen, who was a member of the team accompanying Ole Olufsen on his expedition to Tajikistan in 1898-99. Henriette (nicknamed “Jette”) had inherited three pairs of knitted stockings, which had been saved in a chest together with other objects from the expedition. These items from the expedition are now housed in the National Museum of Denmark.

“This book includes short summaries of these expeditions in addition to the patterns taken from the stockings brought home by the expeditions. . . . I have charted many of the motifs to use them for knitting. I have also described knitting techniques which are represented in the stockings; not least the drawstring cast-on technique which is certainly distinctive for stockings from Tajikistan.”

Published in 2018 by Forlaget på Tredje, Sakskøbing, Denmark, Strik fra Verdens Tag [Knitting from the Pamirs] by Lita Rosing-Schow explores late-nineteenth-century knitted stockings from the Roof of the World (the Pamir Mountains), which includes parts of Tajikistan, Kyrgyzstan, Afghanistan, China, and Pakistan. The text is in both Danish and English. For information, contact [email protected]. 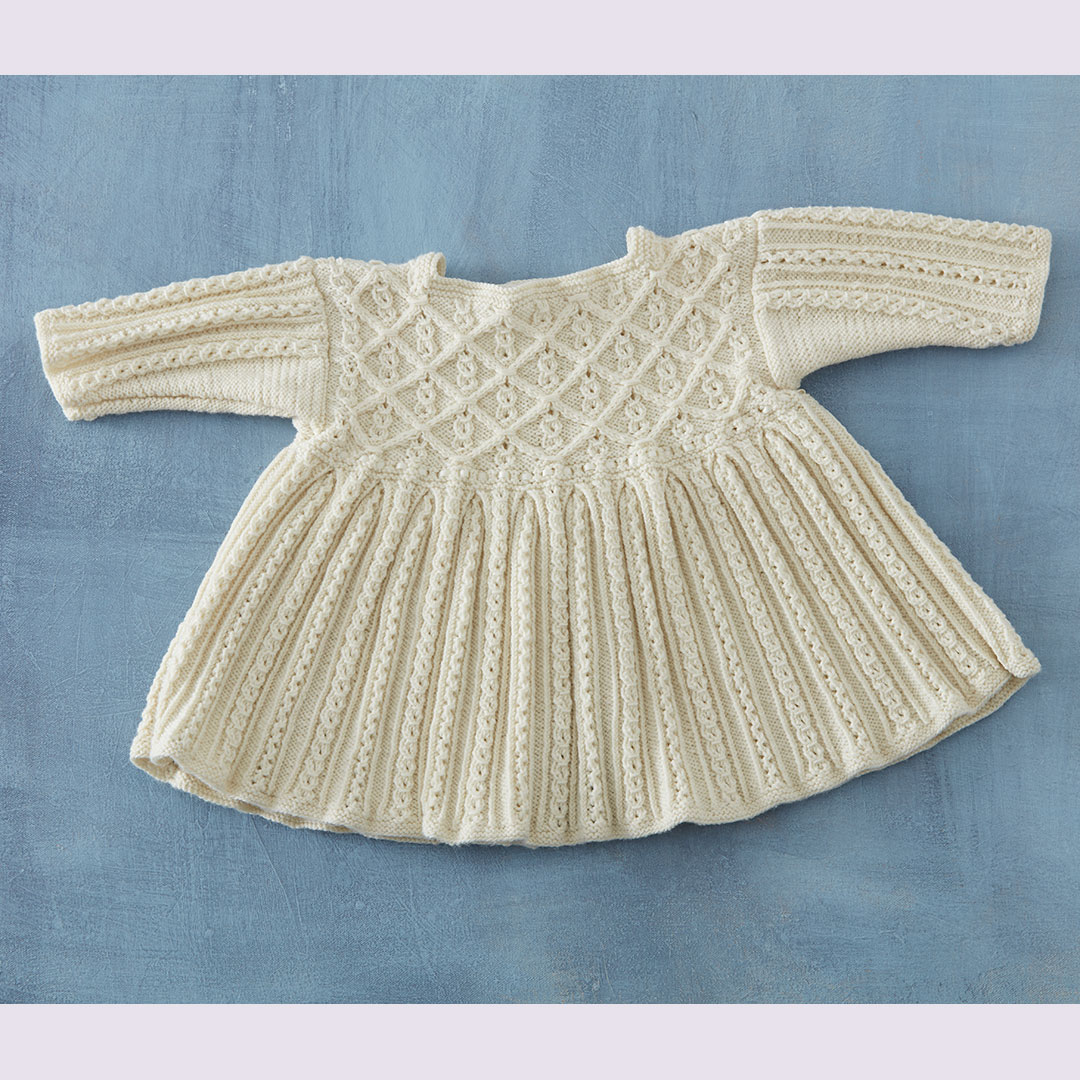 The back of Mimi Seyferth’s exquisite knitted baby jacket. Photo by George Boe.

And again, here’s Mimi to introduce her project: “This baby jacket was inspired by the baby clothes Luisa Sanfelice was making in the painting Luisa Sanfelice in carcere (Luisa Sanfelice in Prison) shown in the preceding companion article. Painted in 1874 by Gioacchino Toma (1836–1891), the painting offers a sympathetic historical portrait of Luisa Sanfelice depicting her ruse of pregnancy to delay execution. She had been imprisoned in Naples for revealing a royalist plot against a republican government that ruled briefly.”

While this post focuses on the serendipitous knitting content from the issue, there’s so much more serendipity. . .

A heartfelt thank you to each contributor to the Summer 2019 issue of PieceWork. Enjoy summer!

Featured Image: Mimi Seyferth’s exquisite Baby Jacket to Knit is a perfect example of the intersection of inspiration and design. Photo by George Boe.