Patty Reed’s Doll: A Small Survivor of the Donner Party

The infamous Donner Party was one group of several that left Independence, Missouri, in mid-April 1846. They were all headed for Sutter’s Fort, California.

The 1840s marked the height of “California Fever,” when thousands left their homes and often their families in search of better, more prosperous lives in the West.

The Donner Party is seen as an archetypal American cautionary tale, yet the party was diverse, including Irishmen, an Englishman, a German family, and an elderly Belgian man, as well as Salvador and Luis, two Miwok natives. The two pivotal families at the heart of the Donner Party were the Donners and the Reeds.

The party fell victim to bickering and in-fighting. They had incredibly bad luck, suffering various small delays that incrementally became a disaster-in-waiting, finally crowned by James Reed’s decision to take an almost untried “short cut” called “Hastings Cutoff” that was to shorten the trip by several hundred miles. However, this route added precious time to the trip, much of which was through country almost impassable except on foot, and the group had to stop frequently to build roads or carve passageways through the rugged terrain. When the snows came, the party was unable to move on, although they were less than 100 miles (160.9 km) from their destination. Of the eighty-one souls trapped in two camps high in the Sierra Nevada mountain range, only forty-eight survived.

Beginning in February 1847, survivors were rescued by several relief parties. Most of the Reed family left with the Second Relief party, but Patty and her brother Tommy were judged too weak and were left behind to await rescue. Patty famously said to her mother, as they parted: “Well, Ma, if you never see me again, do the best that you can.” Incredibly, the entire Reed family survived.

Many books and articles have been written about the Donner Party. Suffice it to say that by the time Patty Reed emerged from the mountains, with her doll hidden inside her clothing, both had endured an ordeal of many months and witnessed the unimaginable. Dolly’s inclusion was already almost miraculous. She had survived the culling of toys back home in Springfield and was hidden away in Patty’s pocket when more of the wagons’ contents had to be discarded in the Great Salt Lake Desert, in Utah. Dolly was to have a third lucky escape: she survived the arduous rescue (a long march out through snow more than 20 feet [6.1 m] deep). It’s highly likely Patty’s rescuers would also have made her ditch Dolly as unnecessary cargo on that desperate march to safety in April 1847. 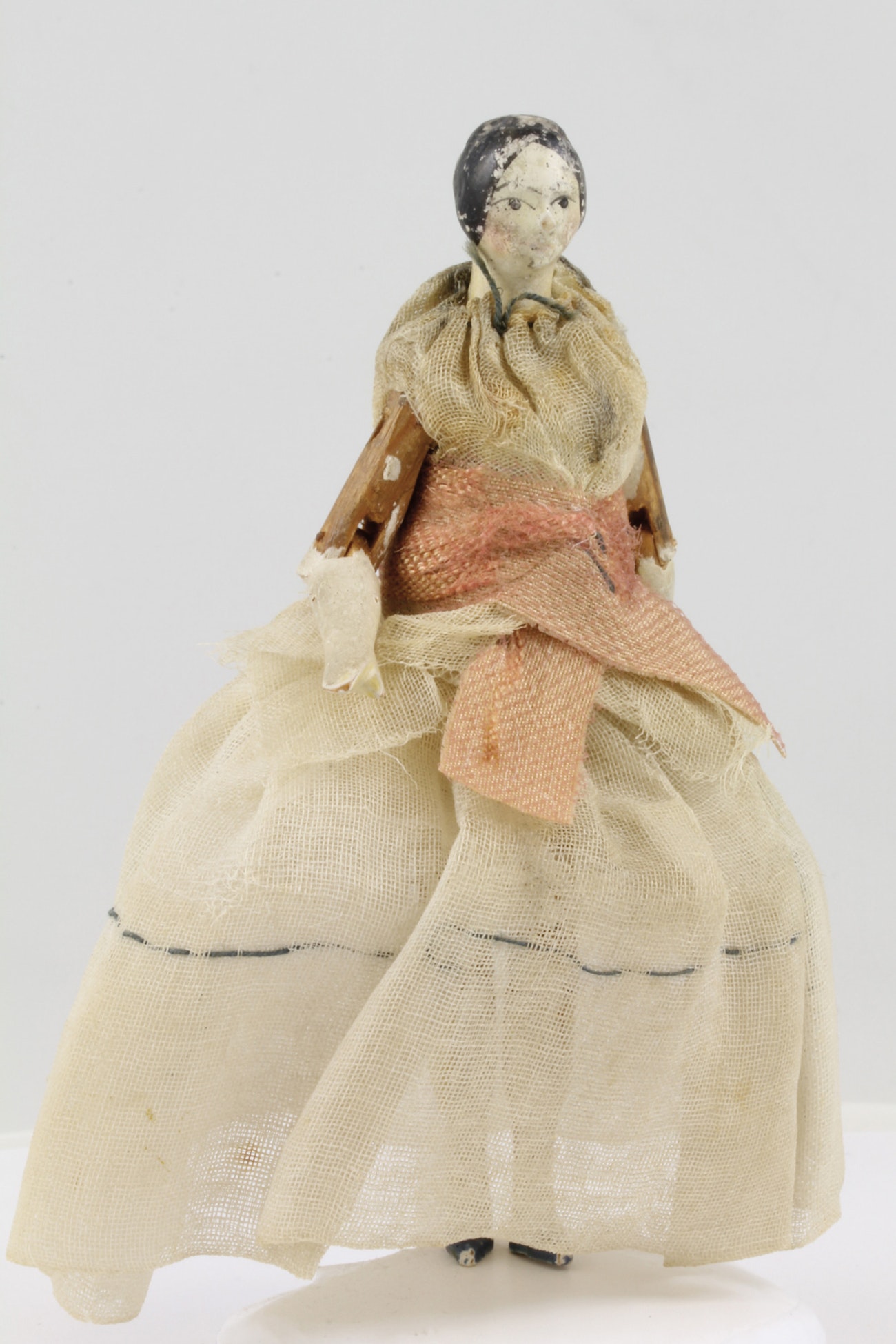 Dolly was given to Patty by her grandmother Sarah. Born in West Virginia, Sarah Keyes had been a pioneer in Kentucky. Patty’s older sister Virginia Reed’s account in The Century Magazine includes Sarah’s regaling the Reed children with her tales of pioneer life. Describing the departure from Springfield, Virginia, writes: “Grandma Keyes was carried out of the house and placed in the wagon on a large feather bed, propped up with pillows. Her sons implored her to remain and end her days with them, but she could not be separated from her only daughter. . . .” Virginia also recounts the moment that Dolly was revealed when the family’s rescue party was almost to safety: “Patty was not alone in her travels. Hidden away in her bosom was a tiny doll, which she had carried day and night through all of our trials. Sitting before a nice, bright fire at Woodworth’s Camp, she took dolly out to have a talk, and told her of all her new happiness.”

We can only imagine the significance of this silent hidden friend for Patty—the comfort Dolly surely offered to the eight-year-old during a time of deep duress. Like the child who loved her, this tiny figure crossed much of the country, transported to the other side of the known world. During harsh months on the trail and months trapped in deep snow in the Sierras, Patty was able to touch Dolly and sense her presence. When rescue came, Dolly came into the open. Before Patty Reed Lewis’s death in 1923, she donated Dolly and other Donner Party memorabilia to Sutter’s Fort State Historic Park in Sacramento, California.

For the complete article, see the Fall 2019 issue of PieceWork.

Also, remember that if you are an active subscriber to PieceWork magazine, you have unlimited access to previous issues, including Fall 2019. See our help center for the step-by-step process on how to access them.

Penelope Hemingway contributed the foreword to the new edition of The Old Hand-Knitters of the Dales (1951. Rev. ed. Lakewood, Ohio: Cooperative Press, 2013) and is the author of River Ganseys: Strikin’ t’loop, Swaving, and Other Yorkshire Knitting Curiosities Revived from the Archives (Lakewood, Ohio: Cooperative Press, 2015). Penelope writes about textile history, re-creates eighteenth- and nineteenth-century knitted items, and is a handspinner and natural dyer. She is descended from wool weavers, clothiers, and pioneer aniline dyers of her native West Riding of Yorkshire.