Knitting bags have been long overlooked as one of the patriotic icons of World War I (1914–1918).

Knitting bags have been long overlooked as one of the patriotic icons of World War I (1914–1918). The Navy League and American Red Cross sent a clear message to knitters: Do not waste a minute of your time when you could be knitting to support our troops. Knit at home, in parks, at social events, in darkened theaters (get out the radium-tipped knitting needles). Tote your oversized knitting bag everywhere with pride!

Popular magazines also urged Americans to knit for the war effort. The knitting bee and her enormous knitting bag from the cover of the February 9, 1918, issue of Leslie’s War in Pictures prove she is productive—and patriotic. 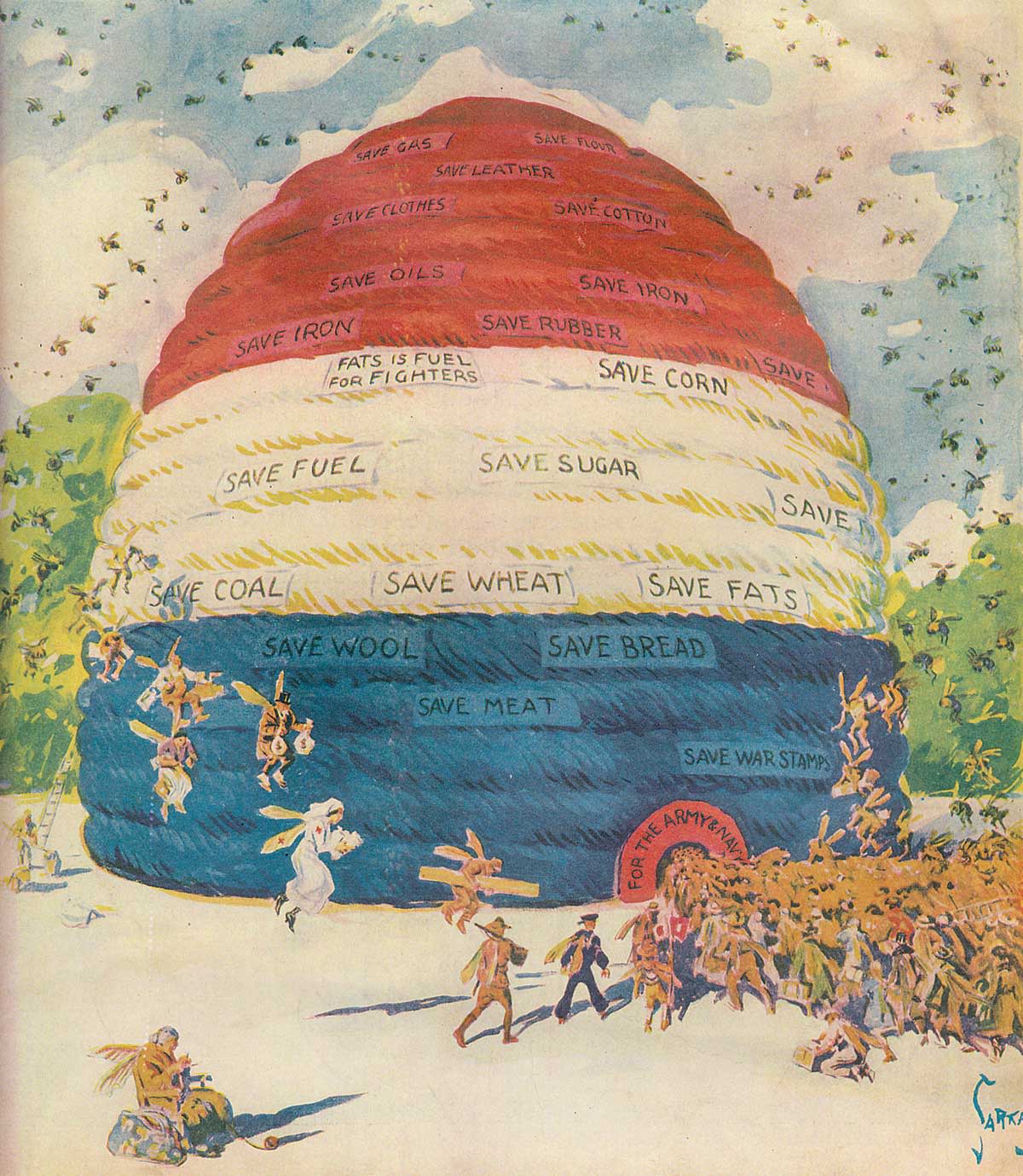 The cover of the February 9, 1918, issue of Leslie’s War in Pictures

The Great War had begun in Europe in August 1914, with novel horrors of barbed wire, aerial combat, and poison gas. America entered its brief but brutal campaign in April 1917, woefully underprepared. Early in 1918, however, 120,000 American troops were arriving in France each month, and nearly everyone had a son or brother or husband fighting in the war. On the American Home Front, women born and raised in the Victorian era walked a narrow social path, but changing times offered greater choices during wartime. Some chose to advocate for peace or preparedness. Others embraced new opportunities for service in the Navy, Marines, Army Nurse Corps, Army Signal Corps, Salvation Army, or Red Cross.

Countless others looked to knitting—and the display of knitting bags—as a less defiant and more socially acceptable show of patriotism. Whether sewn from colorful floral prints or simple khaki cloth with a red cross added, knitting bags became so ubiquitous that the editor of Needlecraft Magazine noted, “There have been and are knitting-bags—and knitting-bags—so many, indeed, that it would seem as though the designer’s ingenuity must be quite exhausted.” None perhaps was more creative than the “Patriotic Fun” crepe-paper knitting-bag costume handmade for a “knit and purl” little girl (above left) featured in the July 1918 issue of Woman’s Home Companion, or perhaps the knitting bag that unfolded into an apron from the November 1917 issue of Woman’s Home Companion (above second and third from left).

Knitting bags provided guilt-free gifts for wartime holidays. A pattern company claimed that making their unique, stylish bags would “not take too many hours from Canteen and Red Cross days (above right).”

Everywhere, everyone seemed to be knitting. Actress Beverly Bayne (1894–1982) posed with a conspicuously large knitting bag. She turned out two scarves and a sweater between scenes in one month by “utilizing time which would have been wasted.” 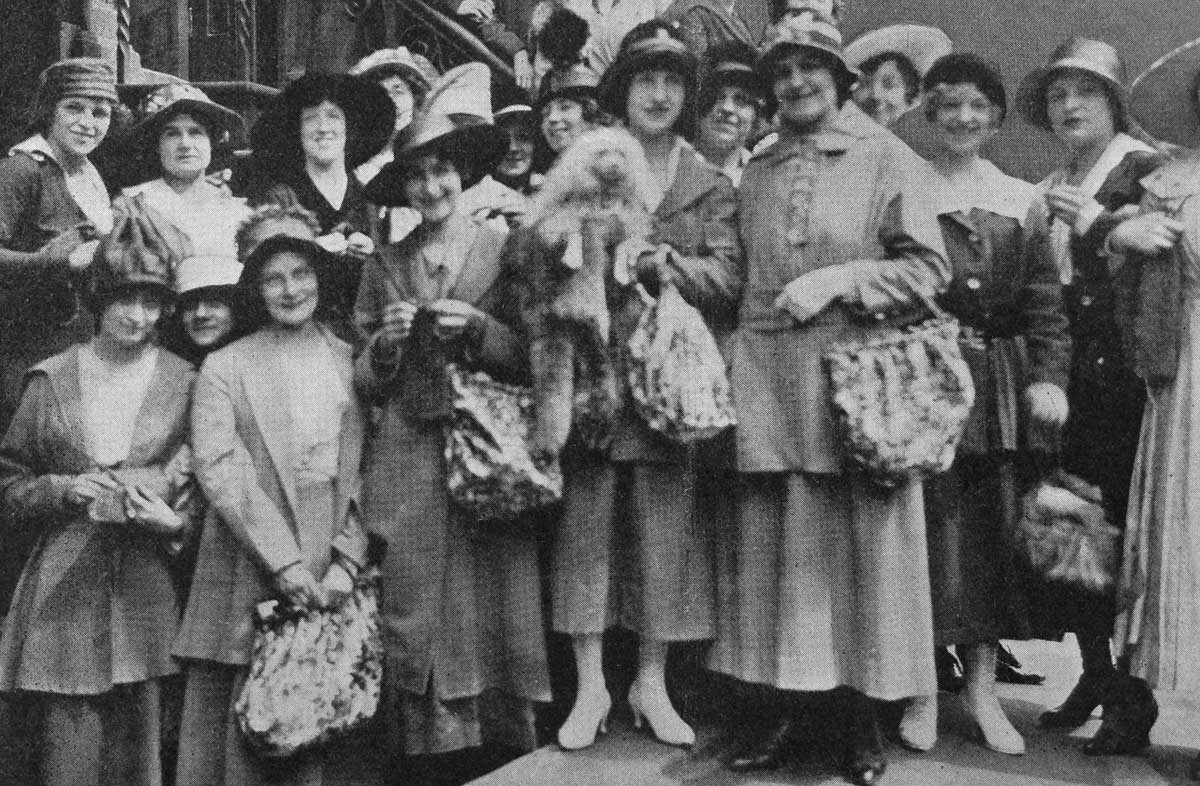 The October 1918 issue of Woman’s Home Companion under the headline “None Too Young!” praised two small sisters photographed with their knitting bag as “brimful of patriotism.” The Hippodrome Girls’ Knitting Club in New York City (above), featured in the October 6, 1917, issue of The Woman Citizen, amazed onlookers with the speed of the girls’ “flying fingers” and perhaps their coordinated knitting bags. 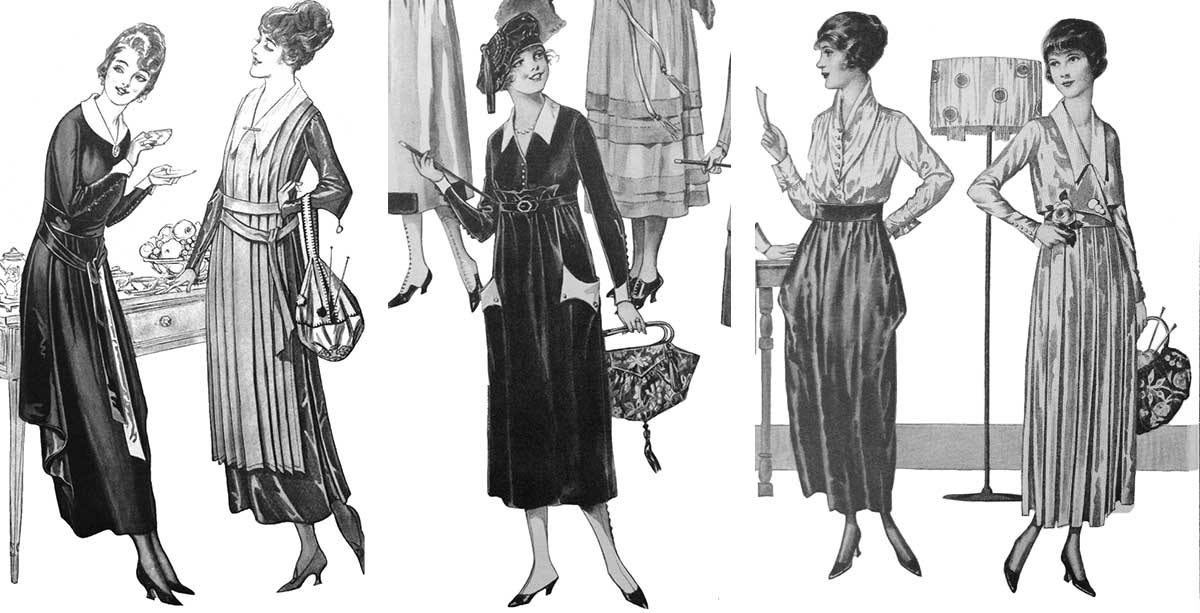 Active work toward woman suffrage paused during the war. Some suffragists who organized knitting efforts on a military model turned out extraordinary numbers of handknits. 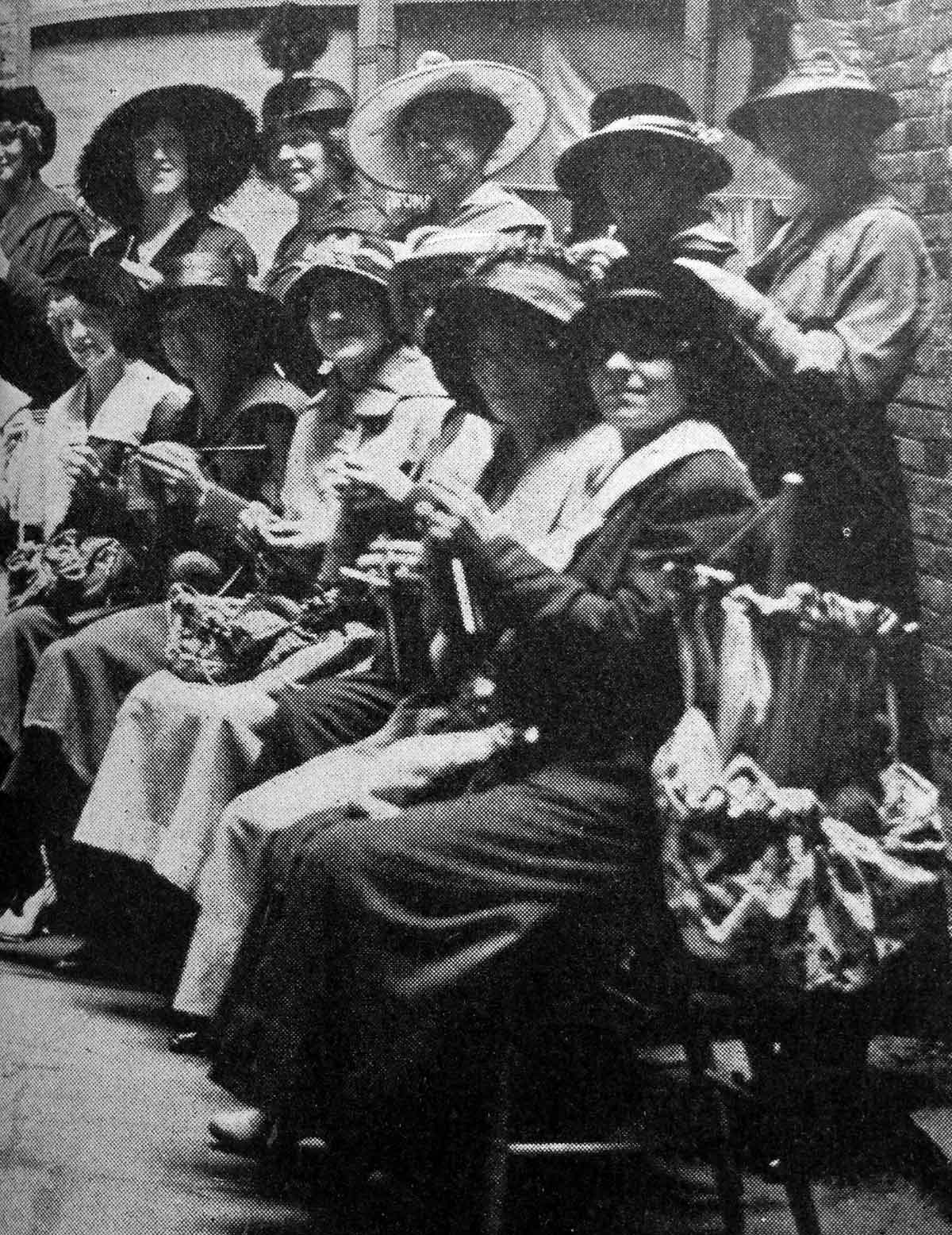 A photograph in the October 6, 1917, issue of The Woman Citizen shows “The Knitting 27th” of New York City (above). The members reportedly knit 3,560 garments for 712 men aboard the warship Missouri. Would suffragist dedication to productivity and determination to participate in government tip the scales toward universal female suffrage after the war?

A fear of traitors gripped the nation. The Espionage Act (1917) and Sedition Act (1918) outlawed statements and actions that criticized the government or interfered with military conscription. Americans of German heritage faced particular suspicion, as did other ethnic populations among the waves of immigrants who had entered the United States before the war. Did carrying a knitting bag provide a visual badge of patriotism for anyone of questionable heritage particularly if not fluent in English? A photograph published in the September 28, 1918, issue of The Woman Citizen is especially illustrative (below). 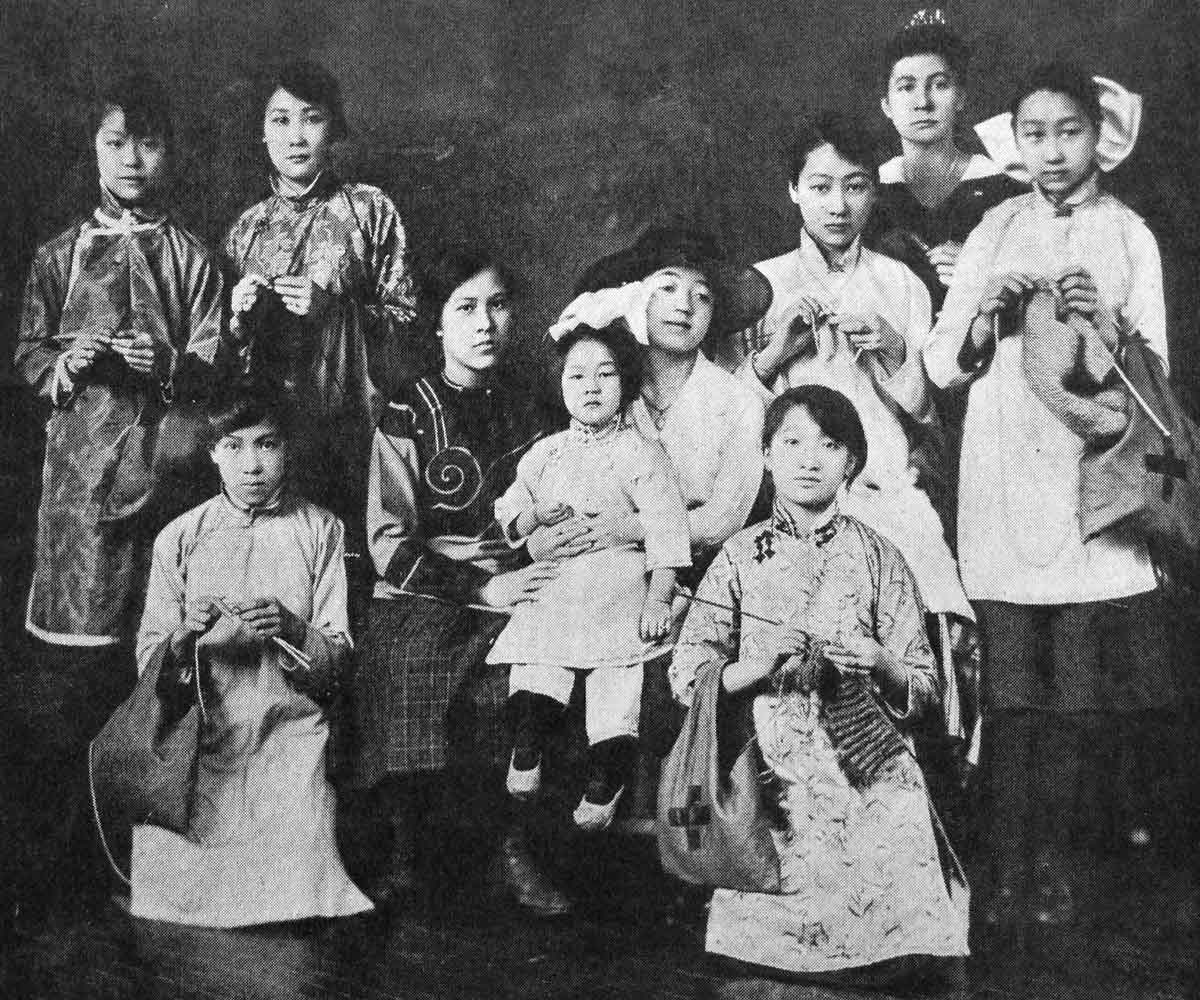 Knitting fervor and huge knitting bags attracted critics. Did “knitting bag patriots” hide behind knitting bags and shirk more critical patriotic duties? Knitters fired back at the criticism. Troops needed knitted wool garments, especially socks. Perhaps more important, handknits sent the message to the troops that those on the Home Front held them in their hands and hearts.

The world attained an armistice in 1918 on the eleventh hour of the eleventh day of the eleventh month. Only twenty-three years later, knitters would pick up their needles and knitting bags to knit for the troops once again.

Susan Strawn takes a particular interest in American knitting history and translating historical American knitting patterns. She is professor emerita of apparel design and merchandising at Dominican University (Chicago) and a PieceWork contributing editor. She thanks the Seattle Public Library for access to their collection of bound periodicals and access to the Scandiuzzi Writers Room.