A Passion for Pence Jugs

These little knitted jugs are generally about 3 to 4 inches (8 to 10 cm) high, often knitted in the round in two colors, in stripes, using fine yarn and fine needles.

Although the original use for pence jugs was to hold small coins, knit this diminutive example from the November/December 2017[link issue] issue of PieceWork and hang it on a holiday tree or insert a small gift in it. Photo by George Boe.

One thing that piqued my interest in Victorian knitting early on was the pence jug. The anonymous author of A Guide for Knitting, Netting and Crochet describes its pence jug as “one of the very prettiest and most useful inventions to be classed under Knitting. The vase-like form, the minuteness, the convenience are all fitted to render it worthy of favouritism.”

These little knitted jugs are generally about 3 to 4 inches (8 to 10 cm) high, often knitted in the round in two colors, in stripes, using fine yarn and fine needles. Several nineteenth-century knitting books have instructions for at least one jug, and a few appear in museums and other collections, such as in the Victoria & Albert Museum in London and in the United Kingdom’s Knitting and Crochet Guild collection.

Some patterns refer to the small receptacle as “a jug for holding ladies’ silver and gold,” and others refer to it as “a pence jug or purse.” We know, then, that the jugs were intended to hold coins, but we do not know how they were actually used. The red one with blue-gray stripes in the Victoria & Albert Museum is pictured on the museum’s website. However, one does not get a sense of its small size from the image—2¾ inches (7.0 cm) high and 1¾ inches (4.5 cm) wide at the widest point.

When I’m looking at nineteenth-century knitting books, either online or in reality, I always check to see if there is a pattern for a pence jug. Sometimes I am lucky and find one. There seems to be no obvious reason why one is or is not included. The majority are in books published in the 1840s, with a few in books from later decades. Not all the major writers offered patterns for them: Mrs. Jane Gaugain provided one in The Lady’s Assistant, but Mademoiselle Riego did not; Miss Lambert produced two quite different patterns in the two series of My Knitting Book, which were published in the 1840s. The series of My Knitting Book regularly went into different editions but continued to include the pence-jug patterns. Presumably, there was some demand for them. The only other writer to present more than one pence-jug pattern was Elvina M. Corbould, who presented three in the first series of The Lady’s Knitting Book, published in 1874, and then a fourth in the fourth series of that title, first published the following year. All four series went into different editions, with the pence jugs still included, again suggesting a continuing interest in them.

All the patterns that I have come across, bar one in the first series of The Lady’s Knitting Book, are knitted in the round. If needles are recommended, the sizes given are very fine, often No. 16 or No. 17 (U.S. 000) and sometimes finer. (Note: Miss Lambert used a different needle-measurement scale from other writers.) Usually, a set of four needles is recommended, but occasionally a set of five is suggested. Most authors recommend using German wool, the fine wool yarn used in embroidery such as Berlin work, which came in a huge variety of colors. Most authors also recommend two contrasting colors, such as claret and green or blue and orange. Mrs. Hope’s ribbed pence jug in The Knitter’s Friend uses four colors, and she suggests using shades of the same basic color, “one light and three considerably darker” for a four-color approach. Elvina Corbould, writing in the 1870s, recommends using Andalusian wool, which is likely to have been slightly thicker than Berlin wool, and a couple of writers, including Mrs. Gaugain, state that the jugs also can be knitted in silk. 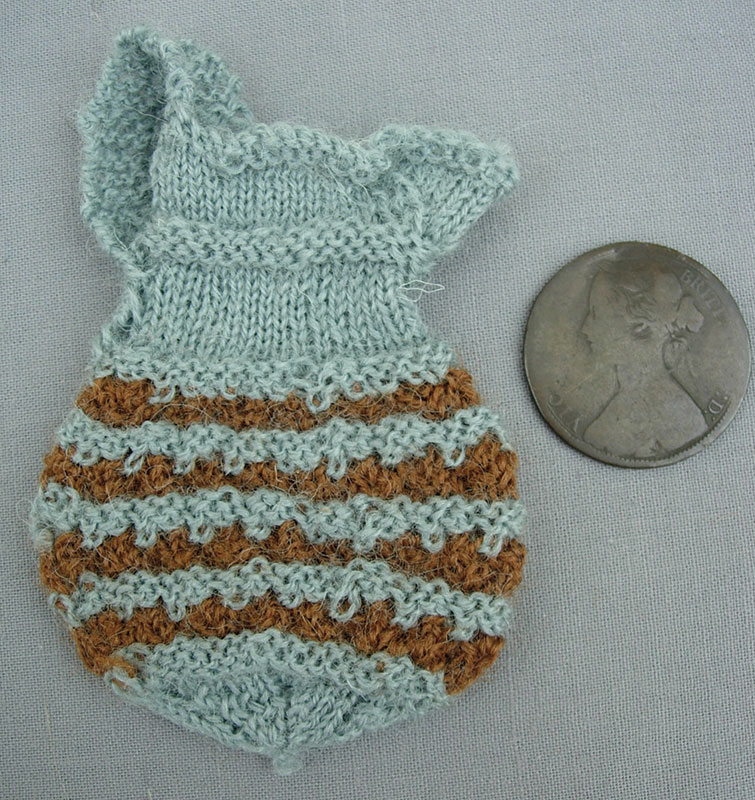 Each pattern is different, though they have some similarities. The pence jugs are, as their name suggests, shaped like a jug, with a narrow neck at the top, which increases to form a bowl shape underneath the neck before rapidly decreasing to the base. The usual direction of the knitting is top down, although Mrs. Hope’s jug, Elvina Corbould’s pattern made on two needles, and the pattern in The Young Lady’s Journal Complete Guide to the Work-Table start at the bottom. The handle is created with a narrow strip of knitting, usually, but not always, as an integral part of the main jug. [To view another pence jug made by Lesley O’Connell Edwards see her article, Knitting in the Victorian Drawing Room, in PieceWork January/February 2012.]

I find the jugs fun to knit, taking only an evening or so to make, although virtually all patterns have errors (missing rounds or stitches), which can make for some interesting detective work. And the instructions can be open to more than one interpretation. Although some authors promise that all their patterns are checked, I still advise caution.

Because few patterns are illustrated, knitters had little to guide them other than a preconception of what a pence jug should look like. Few rows are identical, though there is often an obvious “flow” to the directions—which maintains one’s interest—and some are attractively patterned. Elizabeth Jackson’s pattern in Practical Companion to the Work-Table results in a different shape; one wonders if it was intentional or if the instructions were just poorly written. The pattern in A Guide to Knitting, Netting and Crochet partly expands the diagram of the jug in the frontispiece, but knitters need experience to work out how to obtain the required shape. For instance, only an initial number of stitches for the spout is given; thereafter, knitters are on their own. 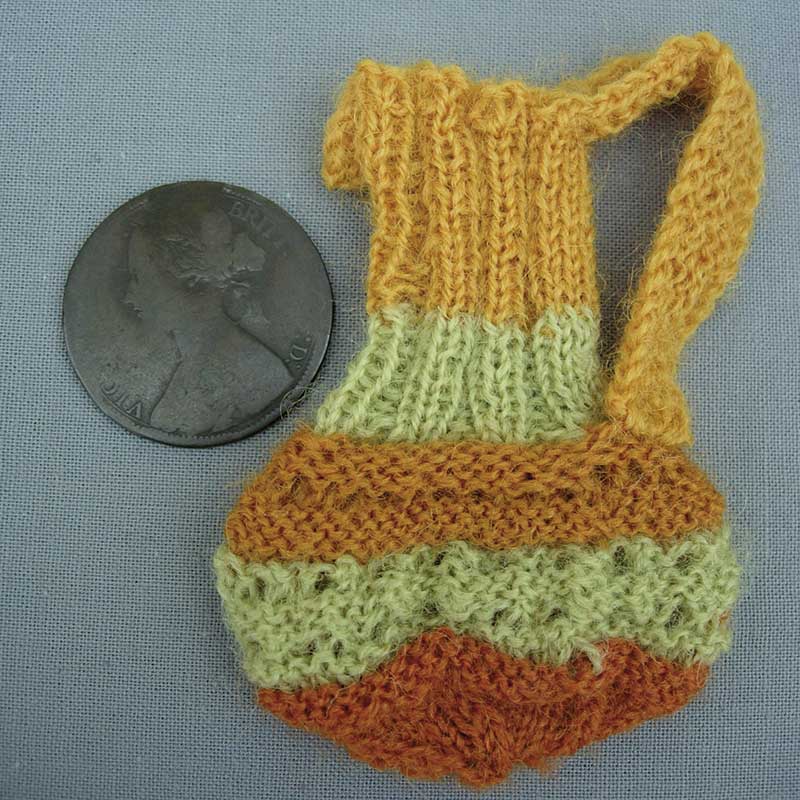 The handle is created typically by knitting four to six stitches in garter stitch (usually referred to in the books as “plain knitting”), then further stitches are cast on from those to create the rim of the jug. Occasionally, the handle is made by casting on more stitches (e.g., twenty) and knitting only a few rows before casting off, then picking up the stitches along a short edge for the handle before going on to cast on for the rim. A few handles are made at the end by picking up four or six stitches opposite the spout. The “free” end of the handle generally is sewn down at the start of the increases for the bowl of the jug. Some handles are made by just knitting a rectangle and sewing both ends on.

The neck usually is created from two-by-two ribbing (knit two, purl two). Mrs. Gaugain comments that the purpose of the ribbing of the neck is to prevent the money from falling out, although the two jugs created from the bottom up actually have quite wide necks, with more than enough space to let money fall out. Mrs. Jackson’s pattern uses a knit three, purl three rib. The pattern in A Guide to Knitting, Netting and Crochet provides a neck in plain knitting, but the knitter is instructed to add a gilt ring before sewing the handle, the writer explaining that the ring drawn over the lip and neck will secure the purse. A section for the spout is decreased away at the top of the neck over several rounds, with the actual number of rounds varying from pattern to pattern.

Pence jug with ring fastening at neck created from the pattern in A Guide to Knitting, Netting and Crochet shown with a Victorian penny. The ring is moved back over the handle to allow access to the money inside. Photo courtesy of Lesley O'Connell Edwards.

The bowls of the jugs vary in size and roundness. Most jugs have two or three increase rounds to get from the number of stitches at the end of the neck to the full width of the jug. Mrs. Gaugain’s pattern produces the smallest jug, with only fifty-four stitches at its widest part, just big enough to take an old penny. Some measure more than eighty stitches at that point.

All of the bowls are patterned. Much of the patterning is created by alternating bands of stockinette and reverse stockinette, with colors changing as the bands change from one stitch to the other. Sometimes, a pattern includes a row of yarnovers and purl two or knit two together for one or more of the bands, as in the pence jug in the first series of Miss Lambert’s My Knitting Book. The pence jug in the second series of My Knitting Book includes slipped stitches, the only pattern I have come across so far to use them. The most ornate pattern I have found is one with raised leaves worked around the body of the jug in a contrasting color in The Young Lady’s Journal Complete Guide to the Work-Table, where the pattern is illustrated with a color plate.

Elvina Corbould also offers what she describes as a “long” pence jug: the body of the jug is a long straight shape, only fifty-two stitches at its widest. Mrs. Jackson’s jug has a slight roundness at the top, created by the change from rib to sets of all-purl rounds alternated with all-knit rounds; otherwise, it is straight sided until near the bottom, where she provides instructions for an increase of just two stitches on each of seven rounds, just before the decreases for the base begin. However, why she did so is not obvious; perhaps it was an attempt to make a broader base.

The bottom of the jug generally is created by rapid decreases (or increases if knitting from the bottom up). Usually, the stitches are divided into six sections, two on each of three needles. The decreasing is done at the same point in each section on every round, until six stitches remain, then the sections are joined together. The resulting star shape lets the jug sit straight on a flat surface. The bottom of the pence jug in The Brighton Knitting Book decreases at a slower rate, only four stitches being decreased in each round, resulting in a more pointed bottom, and a jug that can only lie on its side.

The first pence jug I knitted was for an exhibition of modern reproductions of Victorian patterns I was putting on at our local library. I used fine needles (1.5 mm/U.S. 000) and Appleton’s crewel wool, the closest modern yarn I could find to the German wool yarn that the pattern called for. I knitted the jug, which had a round body, in a couple of evenings. Because I enjoyed making it, I decided to make a second narrower one as a contrast. Then, I had to move on to make other items for the exhibition, but I kept finding other patterns for pence jugs. Remembering that the first two had been quick to make, I knitted jugs for the exhibition from those patterns as well. The small jugs almost require like companions and knitting them is addictive. So, I now have a collection of reproduction pence jugs!

“A Passion for Pence Jugs,” by Lesley O’Connell Edwards, and other great articles about needlework’s rich history can be found in the November/December 2017 issue of PieceWork.

Lesley O’Connell Edwards lives in rural Worcestershire, England, with her husband and two cats. She enjoys researching knitting history, specializing in Victorian knitting books and the Tudor period. She is a former editor of the United Kingdom’s Knitting and Crochet Guild journal, Slipknot.

Although the original use for pence jugs was to hold small coins, knit this diminutive example from the November/December 2017 issue of PieceWork and hang it on a holiday tree or insert a small gift in it. Photo by George Boe.