Although urban Turkish women rarely wear them, the women of some rural areas still wear the traditional oya-edged head cloths.

In the introduction to Osmanlı’dan Günümüze Oyalar [Oya Culture since the Ottomans] (Istanbul, Ataturk Cultural Center Publications, 2005, in English and Turkish), Taciser Onuk observes, “Handcrafts, like all other folk arts, are the liveliest and most thoughtful ways of documenting a nation’s cultural identity.” Oya, the Turkish term for a decorative edging or embellishment for garments and other cloth articles that has been made since antiquity, plays a key role in the cultural identity of Turkey and several other countries of the eastern Mediterranean region.

Originally made of knotted silk threads, contemporary Turkish oya includes iğne oyaları (knotted ­needle lace), tığ oyaları (crochet), mekik oyaları (tatting), and boncuk oyaları (beading) made with rayon and other synthetics, cotton, and silk threads. Commonly, several techniques are used together, such as a base of knotted lace with bead-embellished crochet or tatted motifs. Of all the techniques in current use, needle-knotted lace is considered the most traditional.
Two basic construction methods are used in needle-knotted oya: either the motifs are made from several flat pieces that are knotted together or they are made in a tubular form by working the knots in the round instead of flat. The same basic knot is used throughout; the forms vary according to the way in which the thread is looped and connected between knots. The knots can create either “square” loops or “triangle” loops—in the latter, a return thread bisects the loops. Once these basic variations are mastered, colors and elements may be combined into fantastic flowers and creatures that are limited only by the needleworker’s imagination and patience. 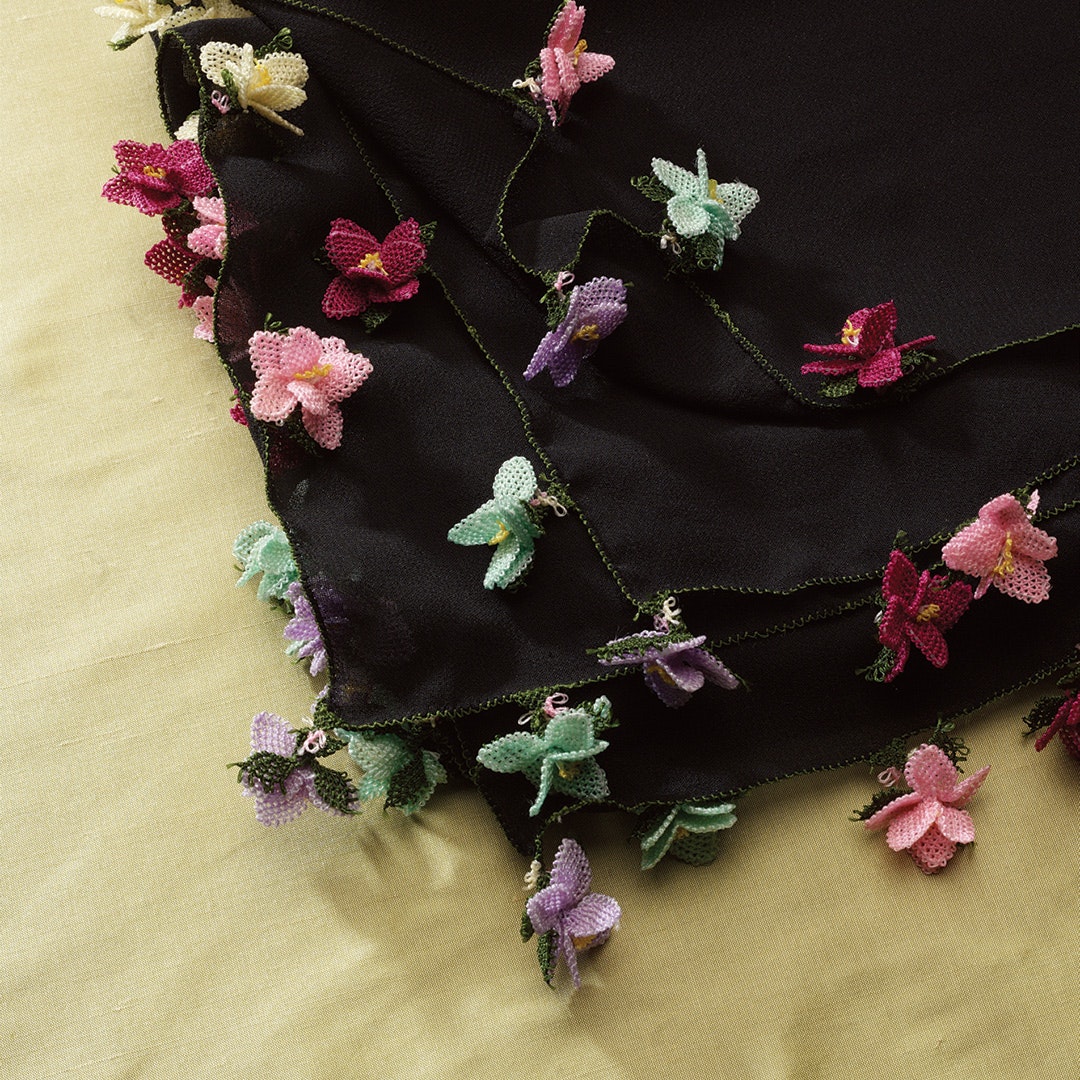 Needle-knotted lace is not unique to Turkey but spread along trade routes and is also found in Greece, Cyprus, Lebanon, Bulgaria, Armenia, Israel, and the historical Palestine region. Known variously as oya, Rodi lace, ­Smyrna stitch, bibilla or bebilla, kombo velonya, Nazareth lace, kene, chebka, or Armenian lace, it is used throughout the region to make doilies and other larger textiles in addition to edgings. In all cases, the lace is worked with needle and thread, developing row upon row of knots into intricate designs. Although a few basic shape elements are common to all regions, each culture has assembled them into its own traditional patterns; many of these represent ­aspects of the natural world, such as Mount Ararat, sunrise, carnations, honeysuckles, tulips (Anatolia is the source of the original tulips bred by the Dutch into modern tulip varieties), almonds, and chili peppers. Chili peppers have a special place in the Turkish language of flowers: Because a newly married woman was not allowed to speak without permission in her husband’s presence, she communicated the state of her marital relationship by the oya on her headscarf; chili peppers indicated the heat of anger toward her husband. 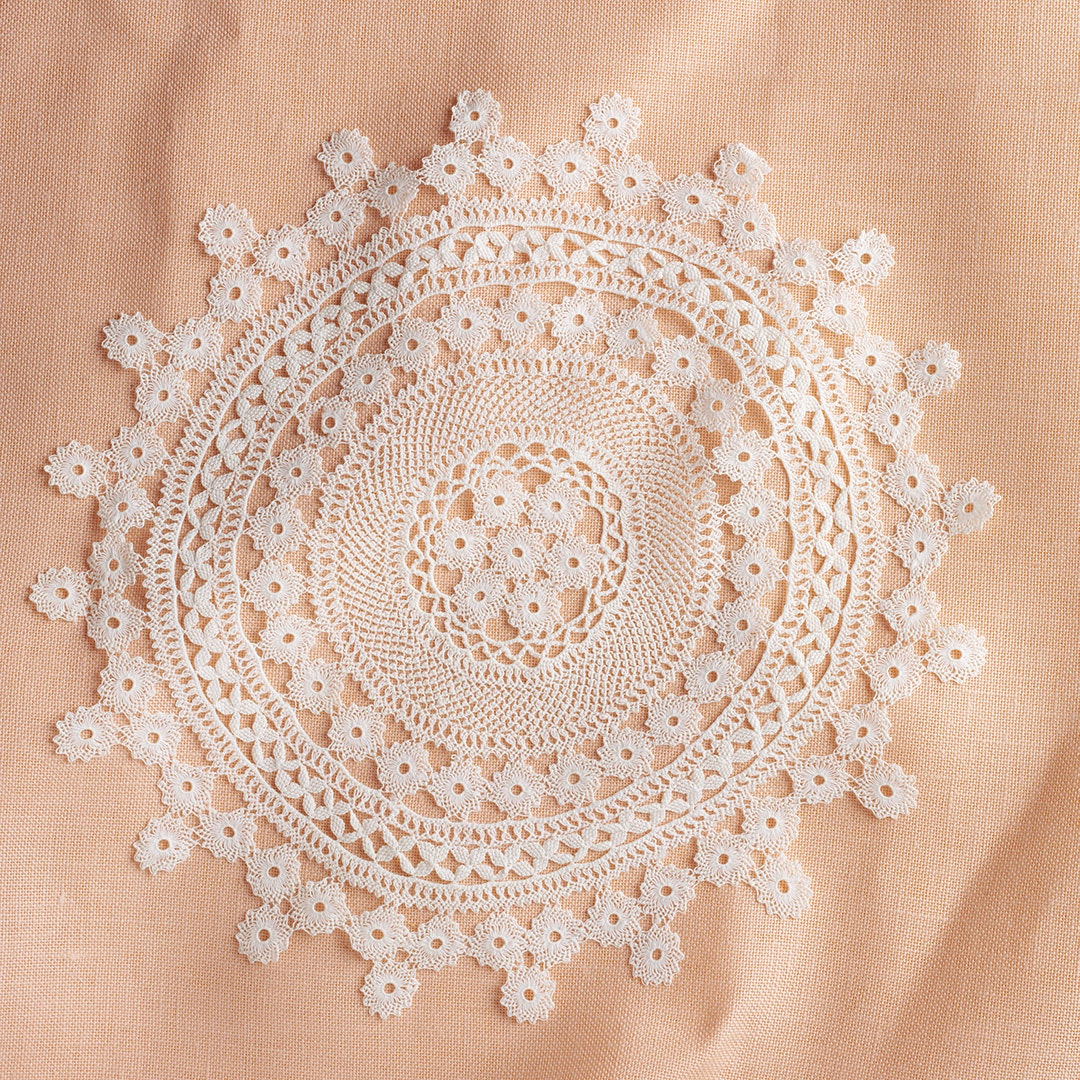 Although urban Turkish women rarely wear them, the women of some rural areas still wear the traditional oya-edged head cloths. Reserved for weddings and other traditional occasions, festive oya honeysuckle flowers may adorn a modern bride’s headpiece. According to Onuk, in a ceremony following the wedding, the bride may give a scarf trimmed with burdock motifs to her mother-in-law to communicate the message “Do not stick to me like a thorn” and a scarf trimmed with wildflower motifs to her sister-in-law to symbolize peace and understanding between the two women.

Cultural boundaries are blurring, and modern technology facilitates the direct exchange of ideas. One exciting result is that artists of different backgrounds and ages all over the globe have been adopting the centuries-old technique of Mediterranean needle lace. The works of Mizue Imai in Japan (to see examples of her work, visit www.igne-oya.com) and Birsen Sönmez in Turkey, for example, are striking for their exquisite design and outstanding technical workmanship. Jewelry, such as that made by Sönmez, and other accessories that combine oya with beads and charms appeal to a younger audience who might otherwise not be interested in lace.

Interested in learning about other types of embellishments? This article and others can be found in the July/August 2011 issue of PieceWork.

Also, remember that if you are an active subscriber to PieceWork magazine, you have unlimited access to previous issues, including July/August 2011. See our help center for the step-by-step process on how to access them.

Carolyn Wetzel has been exploring the techniques of needle-made laces for more than twenty years. When she is not making or teaching lace, Carolyn is working on a Master Weaver certificate and has a full-time job teaching college biology in western Massachusetts.