Not Just an Instruction Leaflet

Have you ever considered the “social life” of a knitting pattern?

The gloves that Ingrid Murnane’s mother and grandmother knitted for her when she was at boarding school. They adapted the Bestway man’s glove pattern. Photos courtesy of Ingrid Murnane

The social connections that one 1940s pattern has forged in three generations of my family during the past seventy years has caused it to mean far more to us than simply a man’s glove pattern.

In 1940, my maternal grandmother, Myrtle Green, then in her mid-twenties, was working in a haberdasher’s in Newport, Isle of Wight, England. Britain was in the grip of World War II (1939–1945). On the home front, women—even Queen Mary (1867–1953)—were knitting Forces Comforts for the troops. Myrtle and her mother, Lily, knitted gloves and balaclavas for members of the Hampshire and Isle of Wight Regiment fighting in Europe. They used a glove pattern, which could be knitted either on two or on four needles, from a Bestway Knitwear booklet bought at their local yarn shop, The Needlewoman. 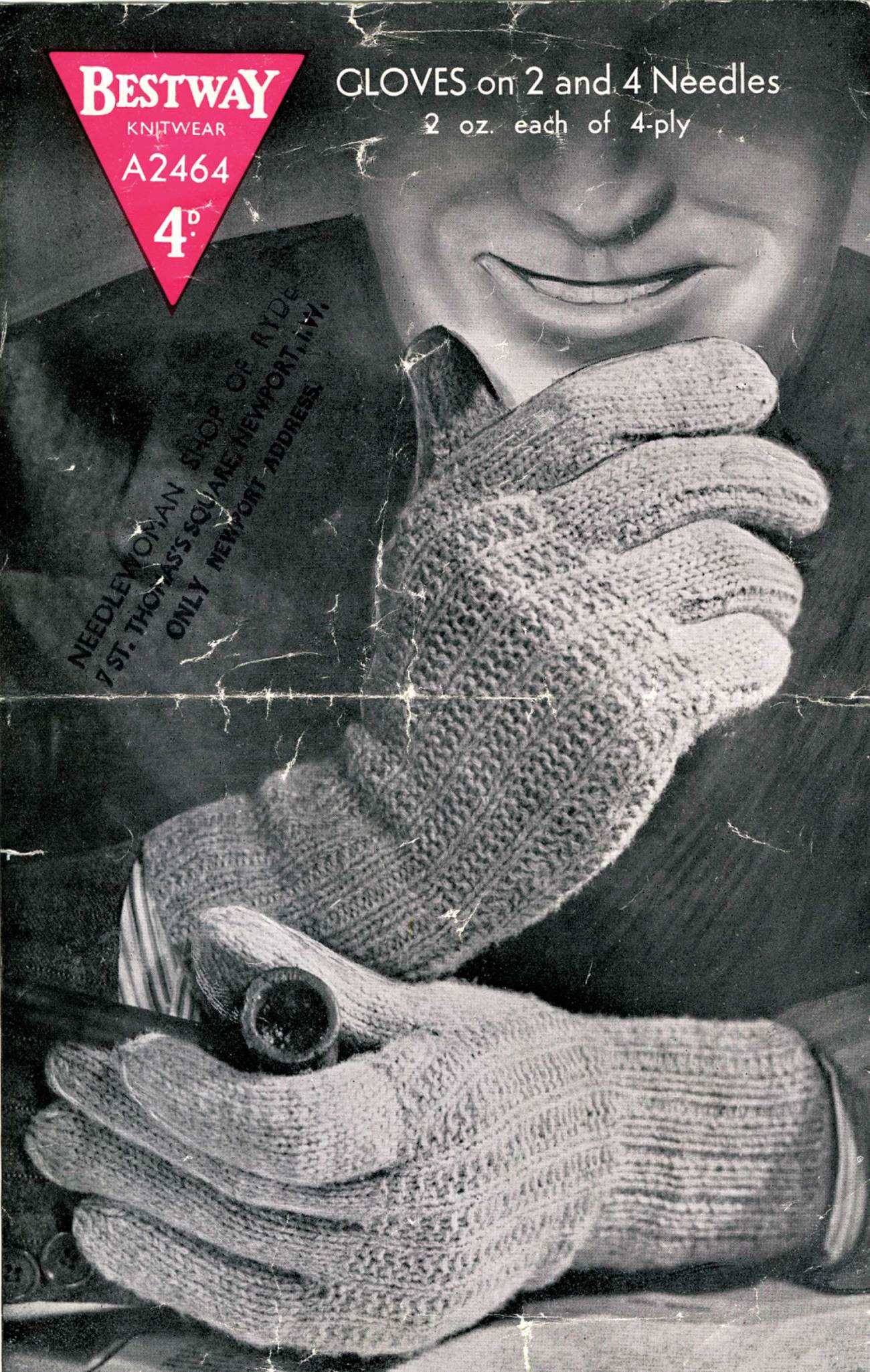 The front cover of the Bestway Knitwear pattern booklet, circa 1941, showing the man’s gloves knitted on two needles.

After the war, the pattern, along with many other patterns, was stored in “the knitting bag.” It occasionally was brought out to make gloves for others in the family, including Myrtle’s new husband, George, and it was apparently part of a pattern swap with other new wives. Myrtle’s sister-in-law Joyce Francis borrowed it to knit some gloves for her own husband. The pattern’s “social circle” widened.

Myrtle and George had a daughter, Grace, who later would become my mother. When Grace was seven years old, Myrtle taught her to knit. Soon the two of them made a pair of black gloves from the pattern for George to wear to work as a railway guard. Grace says, “It was the first ‘big’ thing that I made, and it seemed terribly complicated. I was so proud of the gloves—I even helped to sew them up, and I must have been only about eight or nine, and he wore them to work every day.”

Fifteen years passed. Grace grew up, trained as a nurse, married, and moved to Singapore, where her husband, Paul, was stationed. It was in hot, humid Singapore that Grace taught her friend Liz to knit. As knitting patterns written in English were scarce there, Myrtle sent her daughter some. Among them was the Bestway glove pattern, which Grace and Liz used with dishcloth cotton yarn to make gloves that they used for dusting—they started something of a trend among their friends. Grace recalls being rather attached to the pattern as it reminded her of living in Singapore and of the great times she had with her friend Liz.

I was born shortly after Grace and Paul moved back to Britain. Grace returned the pattern to Myrtle “as she would use it the most.”

In 1981, when I was five, Myrtle (my Nan) taught me to knit while I was on holiday at her house. As the only grandchild at that time, I received plenty of attention. I had all the usual problems with dropped stitches and holes in my garter-stitch teddy-bear scarves. Soon enough, I began to use patterns; in fact, I learned to increase and decrease from the Bestway glove pattern.

I am fond of that glove pattern—now—and am proud that some of my knitting skills came from using it with Nan. But in 1987, I found myself in boarding school and in need of a new pair of gray winter school gloves. Between them, my mother and grandmother adapted the Bestway pattern to fit a child’s hands and knitted up a pair on two needles, substituting double knitting yarn for the 4-ply specified in the instructions. Although that made a chunky glove, the main thing was that they had knitted the gloves out of love instead of just buying a pair.

If you think that I was grateful for this lovely handcrafted pair of gloves, made just for me, you’re wrong. I whined that they were the wrong color, didn’t fit right, and in general weren’t the same as the gloves all my school friends had: machine-knitted ones from Marks and Spencer. Mum and Nan rightly called me ungrateful. I refused to ever wear the gloves, and they were consigned to storage. (You can see from the photograph at the top that they have sustained a little stain damage in the intervening years.)

When Myrtle died, in 1994, I inherited all of her needles. Mum kept some patterns; she particularly included the Bestway glove pattern, as it was one of the last ones that Myrtle had used in knitting for a family member. Because of their connection with Myrtle, Mum always has kept the pattern and the school gloves together. 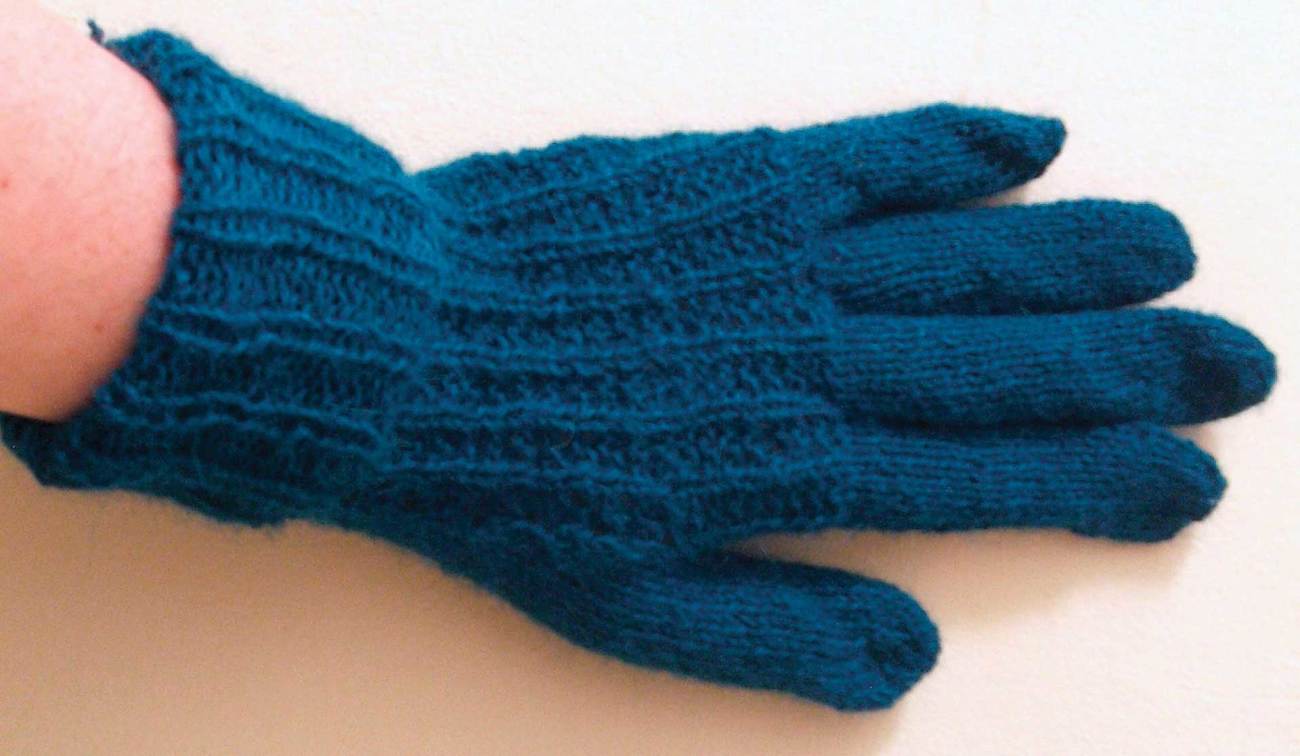 Ingrid Murnane’s man’s glove that she knitted in 2007, using the Bestway pattern. Photo by Giles Babbidge

In 2007, as part of my master’s degree, I researched the story of the Bestway glove pattern. I had known that it had been used for wartime knitting, but I now realized how much it was part of my own family’s knitting history. I decided that I should make a replica of my school gloves, the better to appreciate the work and effort that had gone into making them. (Mum laughed when I told her this.) I had many problems with yarn and gauge. If it had been any other pattern, I probably would have abandoned it at this point and chosen another. That I could not bring myself to do so proved to me that my emotional investment in the pattern and the gloves was more than I had thought.

The most interesting thing about this pattern for me today is its role as an agent of social networking. The chart below shows the pattern booklet’s connections to people who knitted gloves using it (shown with green arrows), those who learned to knit using it (blue arrows), and those who received gloves knitted from it (red arrows). 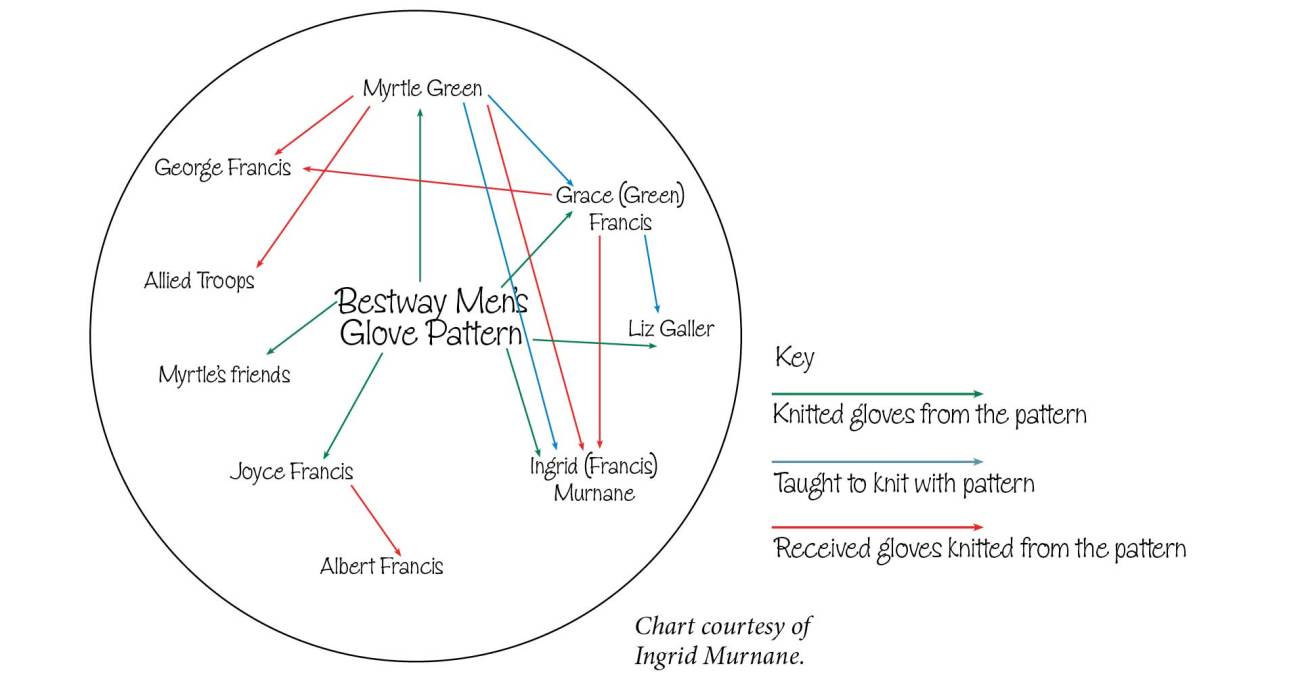 The Bestway pattern is an instruction leaflet, it’s true, but for me, it’s also a tangible link to my grandmother, to the knitting skills that she passed along to my mother and me, and to the times when we knitted together. It evokes powerful memories, and it is a part of our family knitting history.

Ingrid Murnane was a graduate of the master’s program in History of Textiles and Dress at the Textile Conservation Centre in Winchester, England. She is a textile artist and skills teacher, craft skills researcher, and keen knitter. She also is a freelance feature writer, and knitwear designer.

This article was published in the January/February 2011 issue of PieceWork and was adapted from a lecture the author presented at the 2008 In the Loop knitting conference in Winchester, England, and published by knitonthenet.com in Issue 9, September 2, 2009.