Net embroidery was fairly simple to do but required patience. Catherine would have traced the design on paper or cloth, then basted cotton bobbinet over it, keeping the net straight and not too tight as she mounted it on a simple pasteboard frame.

The delicate neck shawl was a gift from my Great-aunt Mary. To the lacy net triangle was pinned a tattered brown paper scrap saying that the piece had been made by her Great-great-aunt Catherine Skinner. Later, more such lacy pieces came my way and were duly packed away, waiting for me to investigate them “someday.”

A winter devoted to researching my Connecticut Valley family tree brought to light information about Catherine Skinner, who was born in 1818 and died in 1900. Textile research helped me match up my pieces with a needlework technique popular in the 1830s and 1840s called “needlerun,” “darning on net,” or “embroidery on net,” a technique of sewing yarn through the holes in machine-made net. Pat Earnshaw, an authority on lace, calls the technique “Limerick lace” in her book, Needle-made Laces, although several books use the term Limerick lace to refer to lace that includes tambour work done with a hook as well as embroidery with a needle. 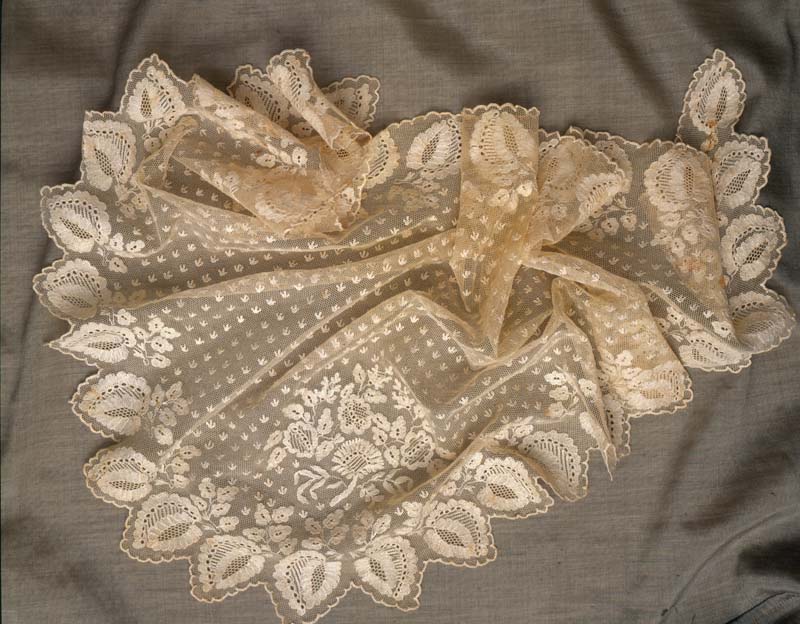 Catherine Skinner belonged to a prosperous family of onion farmers in a Connecticut River town near Hartford. As one of several daughters, she probably spent her mornings helping with household duties and her afternoons in the parlor with her needlework while a sister read aloud from a guide to a lady’s genteel deportment. The sisters attended a private girls’ school where they learned the needlework skills that composed a major part of female education in the early nineteenth century.

Net embroidery was fairly simple to do but required patience. Catherine would have traced the design on paper or cloth, then basted cotton bobbinet over it, keeping the net straight and not too tight as she mounted it on a simple pasteboard frame.

Using cotton or silk embroidery floss in a blunt needle, Catherine would have first outlined the motifs by going in and out through the meshes, then given the work character and body by working various fillings with finer thread. She could cross threads in different directions, vary the length of individual lines, form stars or rosettes, and overcast eyelets, to name just a few possibilities. 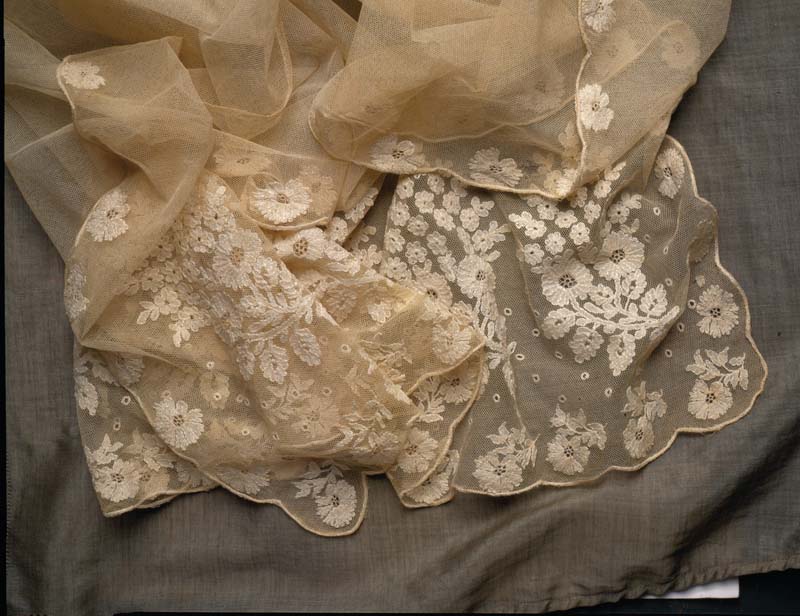 Most workers used white silk or cotton thread on white cotton net, although some embroidered white or black silk net with black silk thread. Black was more popular in the 1840s than earlier and was even used for wedding veils. Sometimes patterns were worked in colors, but little colored work has survived.

Because one of my pieces was labeled as having been worked by Catherine and embroidery on net was a popular activity for American women in the 1830s and 1840s, I can consider it a true family heirloom. Had it not been labeled, I would have no way of knowing if it had instead been worked under the distressing and wearisome conditions that prevailed in England, Ireland, France, or Spain.