Jury of Children. 4½ x 10 inches (11.4 x 25.4 cm). Card’s text reads, “Foreman of the Jury: ‘Our Unanimous Verdict is that O.N.T. beats all others.’” The reverse side (not shown) advertises linen thread, spool cotton, and hand sewing needles. Collection of the author. Photos by Dawn Cook Ronningen

Two phenomena merged in the late nineteenth century: color lithography and post-Civil War advertising directed at a growing consumer market in the United States. The Centennial Exhibition of 1876, in Philadelphia, Pennsylvania, gave lithographers a venue to demonstrate the marketing potential of trade cards, which were freely handed out as examples. From about 1870 to 1890, countless numbers of advertising trade cards were produced, promoting all manner of products for sale. 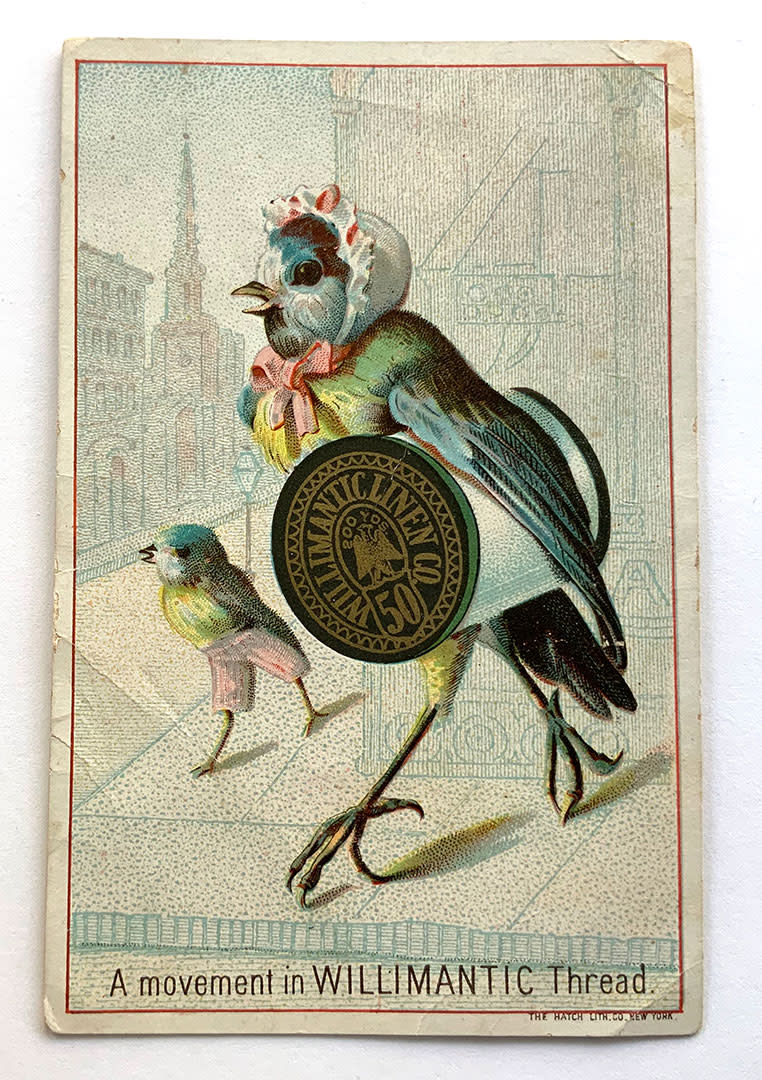 Bluebirds. 3 x 4½ inches (7.6 x 11.4 cm). Card’s text reads, “A Movement in Willimantic Thread.” The reverse side (not shown) says, “Willimantic Thread will lift more dead weight and is smoother than any other.” New York Sun, February 22, 1883. Collection of the author.

Trade cards attempted to influence consumer buying decisions and to increase sales for new products. The trade cards ranged in size from 4 to 10 inches (10.2 to 25.4 cm) and were most commonly either square or rectangular. Advertisers could contract to have custom designs created or select from stock illustrations, and a business’s information was included either on the card’s front or back. Popular designs included beautiful women, humorous children, and animals in various predicaments. The artwork illustrated product features artistically, and often comically, to establish brand recognition. Traveling salesmen sold cards to rural businesses while in cities, local print shops provided cards to area companies. 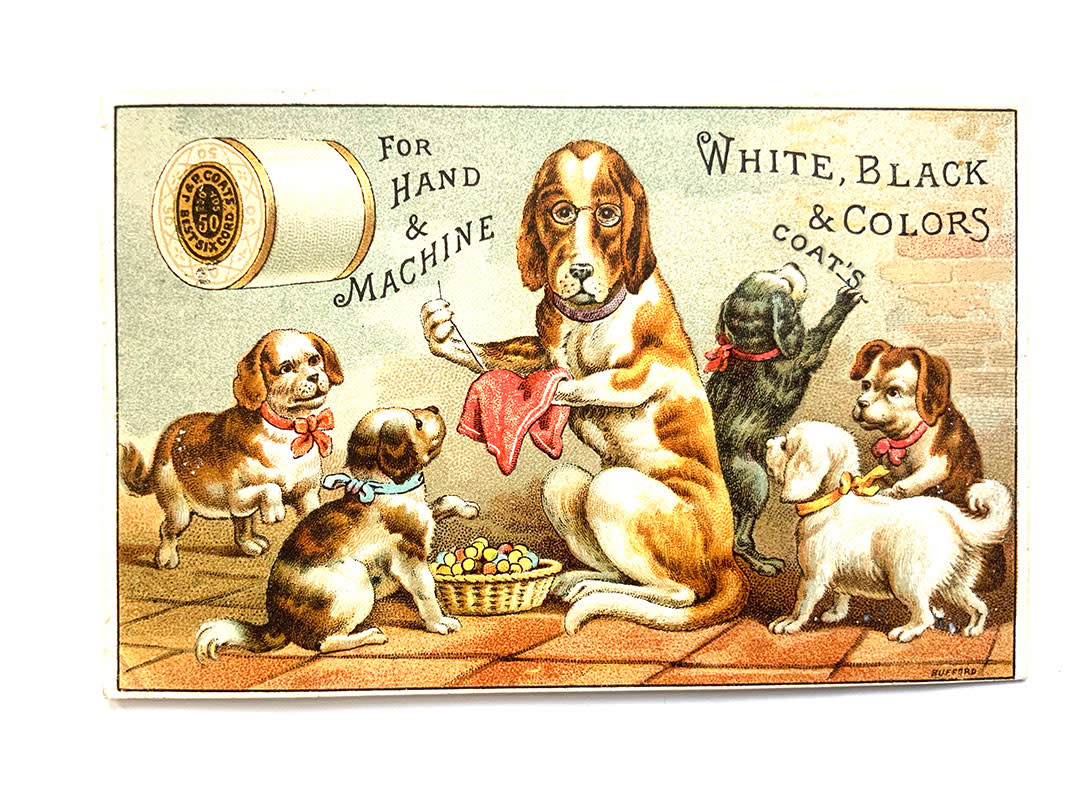 Among the top items marketed to female consumers were sewing supplies, including thread. With the introduction of the home sewing machine, there were a larger variety of new threads available and competing for the consumer’s attention. Many women had experience with hand-sewing threads but less knowledge about threads used for machines, which required the right needles and threads to work properly. Since home sewing was increasingly a combination of machine and hand sewing, a common trade-card theme was to include one thread for hand sewing and one for machine sewing. 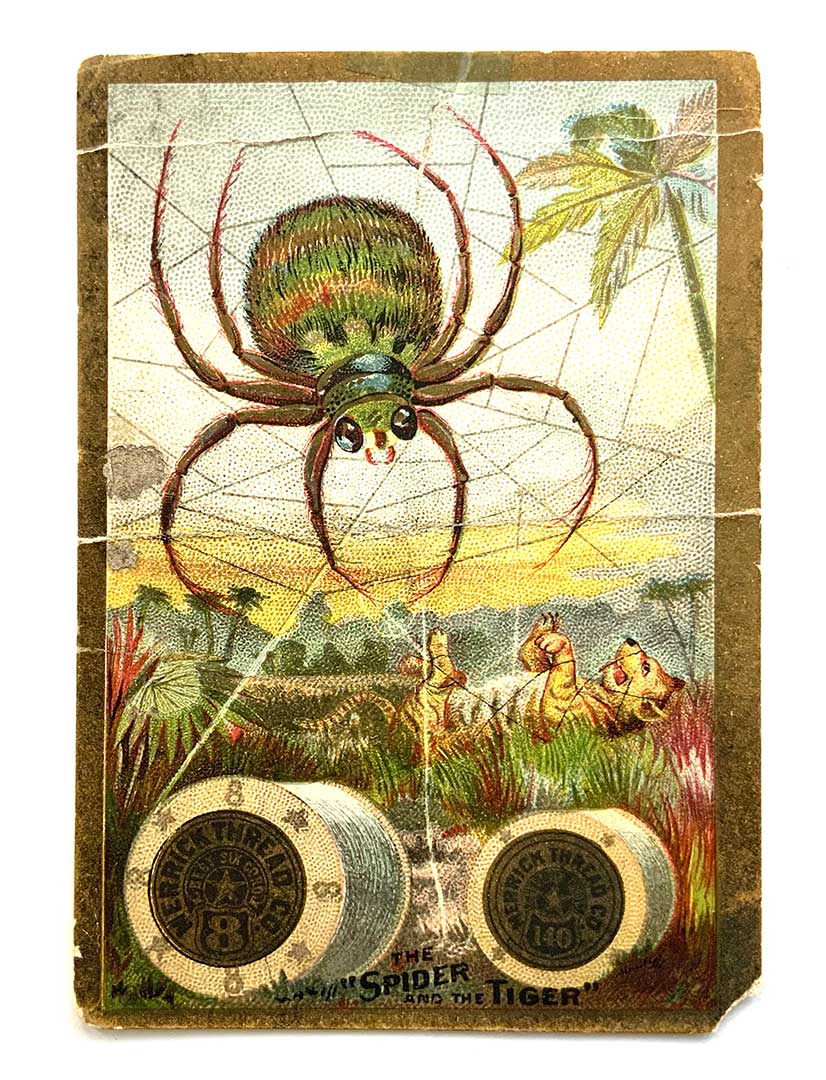 The small colorful trade cards were available to shoppers who often collected them in scrap books. Advertisers hoped that having their product’s names in a consumer’s home would influence future purchases. Some historians believe the primary collectors were children and think that the youngsters requested more cards to complete series sets. Releasing trade cards in a series encouraged continued collecting and return trips to the store. Clark’s thread-card collection depicting the great American outdoors was an example of a series set, and a full set consisted of eight series, with a total of 38 cards. Some cards were signed by the artist and also included the printing company name to further influence the card’s collectibility, then and now.

Trade cards remain popular with collectors today, and many prefer cards with printing on both sides for one side usually provides historic context to the advertising. The cards have historic significance and can be found in the collections of private individuals, libraries, and museums, such as the National Museum of American History and The Metropolitan Museum of Art.

Dawn Cook Ronningen is the author of Antique American Needlework Tools. She lives with her extensive collections of antique needlework tools and textiles in Minnesota and blogs at collectorwithaneedle.blogspot.com.