In her article “Handspun Lace for a Prince” in the Summer 2013 issue of Spin Off, Margaret describes the painstaking process of designing, spinning, and knitting William’s shawl.

Margaret’s unique method involves washing wool lock by lock, fanning out the tip end in her hand, and using a verylight touch as she spins with a worsted draw. Photo courtesy of Edward Field

Margaret Stove has taught spinners around the world how to wash and spin ultrafine wool. But outside the spinning community, she may be best known as the designer of the shawls that were New Zealand’s gifts to Prince William and his oldest son, Prince George. In 1982, she created the Bush Bouquet Shawl (her first full design!) for the royal baby.

When Prince George was born in 2013, New Zealand’s gift to the royal baby was a different Margaret Stove design, Filmy Fern (from her book Wrapped in Lace), though the later shawl was spun and knitted by Cynthia Read.

In her article “Handspun Lace for a Prince” in the Summer 2013 issue of Spin Off, Margaret describes the painstaking process of designing, spinning, and knitting William’s shawl, for which she logged nearly 394 hours. 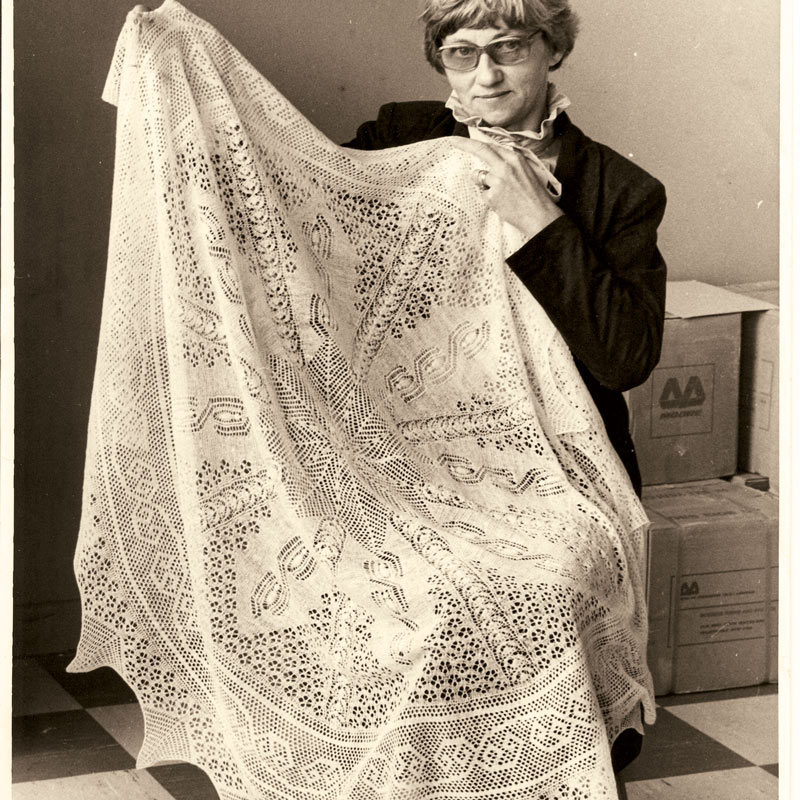 “The announcement had been made that the Prince and Princess of Wales were expecting their first baby in June, and [Merino sheep breeder] Allan [Innes] decided that a shawl as a gift made from his prize fleece would be an appropriate use. He asked me if I would be interested in spinning and knitting it. I agreed on two conditions, the first being that it was an official commission on account of the amount of work involved, and secondly, that I have the opportunity to design a pattern which featured the native flora of New Zealand.

“The fleece duly arrived on March 10th, and I began sorting the beautiful long, silky staples from the shoulder area. After sorting, the individual finger-width locks were washed, lock by lock, in very hot water and rubbed against a bar of pure soap. I laid the individual locks on a towel to dry. I split each lock lengthwise into three equal pieces, fanned out the lock with the cut end as the base of the fan, and removed the weathered tips by pinching them off. I drew out a small amount of fiber from the fan and spun the singles using a worsted spinning technique. The singles were plied to make a two-ply yarn that was skeined and washed again before winding and knitting. What a pleasure it was to spin. 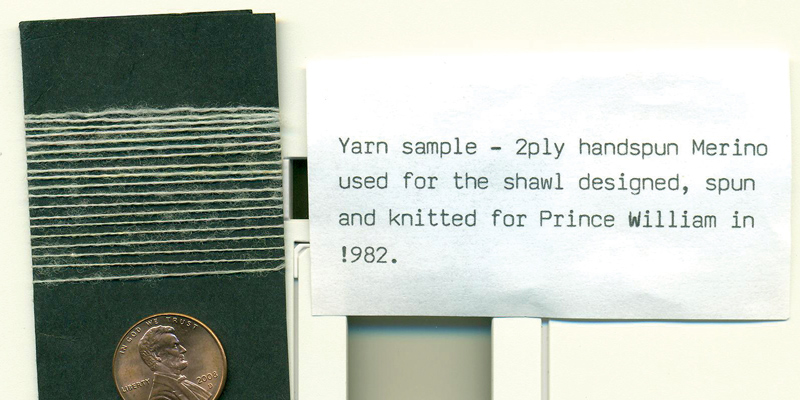 Margaret kept a sample of the singles she spun for the Bush Bouquet shawl. Photo courtesy of Margaret Stove

“The shawl was finished in time for the Woolcrafts Festival, where it was named ‘Bush Bouquet’ and caused considerable interest both for its fineness, as it passed the test of being pulled through a wedding ring, and for the original design. There was also time for Allan to arrange for it to go on a tour of the sheep stations so the breeders who had contributed to the costs of it being made were able to see it for themselves.

“The final phase of this exciting project was receiving copies of the letters sent to the High Country Sheep Breeders thanking them for the shawl. There was a letter from the secretary of the Prince of Wales and also a letter from the Princess of Wales. Later when they traveled to New Zealand the following year with Prince William, I received a letter from Lady Beatty, the wife of the governor general at the time, telling me that Prince William had been wrapped in the shawl when he was carried from the plane to Government House. I was pleased that the project had come full circle when it was used in New Zealand by the intended recipient.”

Margaret Stove of Christchurch, New Zealand, is a leading expert of handspun and handknitted superfine lace. Examples of her work are found in many galleries and private collections throughout the world. A passion for knitting and later designing lace led Margaret to explore techniques for spinning lace yarns.

If you’d like to knit one of Margaret Stove’s New Zealand-inspired shawl designs, try the New Zealand Tribute to Orenburg. For something more baby-sized, try Shetland-Style Lace Bonnet and Booties to Knit, found in A Compendium of 7 Knitted Lace Projects from PieceWork.