How to Make Your Own Knitting Needles | PieceWork

How to Make Your Own Knitting Needles

Included are the “Squirrel Sewing Bag” to stencil and sew, a “School Luncheon Table Mat” to cut from oilcloth, letters from “Aunt Priscilla” and “Uncle John,” and instructions for how to make your own knitting needles!

Make your own knitting needles for your next project. Photo by Siri Stafford/Getty Images.

The September 1919 issue of The Modern Priscilla magazine has a page titled “For Priscilla Juniors: Something to Do in September.” Included are the “Squirrel Sewing Bag” to stencil and sew, a “School Luncheon Table Mat” to cut from oilcloth, letters from “Aunt Priscilla” and “Uncle John,” and instructions for how to make your own knitting needles! 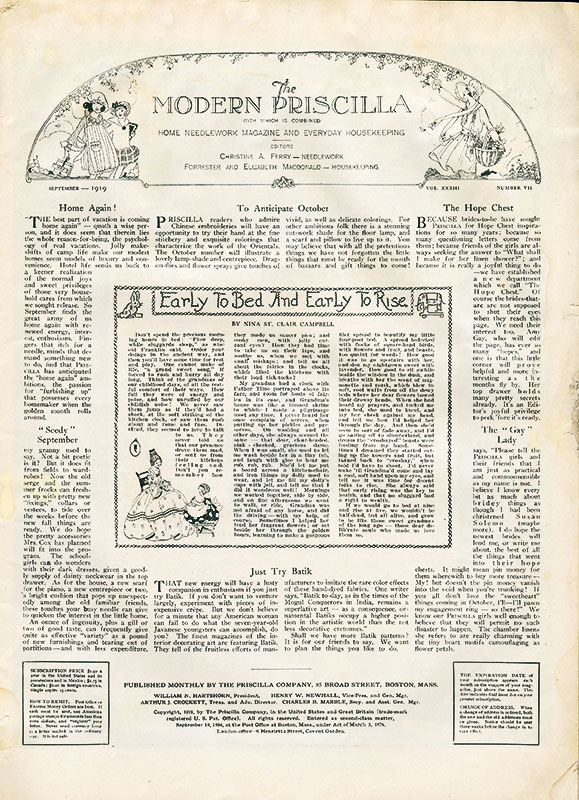 Cover of the September 1919 issue of The Modern Priscilla magazine.

Here are the instructions for making your own knitting needles just as they appeared in September 1919.

YOU have often heard your Mother say she wished she had another pair of knitting-needles. Why not make her a pair? You can make them so well she will declare they are far better than any she can buy.

See if Father hasn't a piece of small dowel rod that he can let you have, or stop in at the Manual Training School on your way home, and ask the teacher if he has a waste dowel stick that they are not going to use. You can buy two pieces from Uncle John's workshop just the right length and size to make sweater needles like those you used last winter for Red Cross work.

You want quarter-inch dowel, two pieces about thirteen inches long. At one end mark off one-half inch, and with your knife whittle it to a point. It is a good plan to put a dot with your pencil right in the centre of the end, and whittle down to it on all sides from the line half an inch back. Make it just as smooth as possible.

Next sandpaper the wood very thoroughly. Wrap the sandpaper round the stick and rub lengthwise; rub till roughness has disappeared or the yarn will catch on it. When you sandpaper the point of the needle, round the point a little, for if it is too sharp it will split the wool, and be hard to work with. When you have sandpapered the needles, knit a few stitches with them, for if they are still too sharp, it is easy to change them before they are varnished.

Get two small dishes, and in one of them put some boiled linseed oil, and in the other put some shellac. Take a soft cloth, and dip it first into one and then into the other and rub it on the needles. If it feels greasy, take more shellac; and if it feels sticky and dry take more oil; but do not mix the oil and shellac together in one dish. Rub the needles all over in this way, then let them dry, and then repeat the process. Do this five or six times, then they will be beautifully polished.

Featured Image: Make your own knitting needles for your next project. Photo by Siri Stafford/Getty Images.