Make Do: Feed-Sack Fashion in the First Half of the Twentieth Century

In the early twentieth century, staples, such as flour and livestock feed, were sold in cloth bags. As American families entered the 1930s, reusing these fabrics became more popular, and bags became more colorful.

Women in poor rural areas of the United States made clothing from cotton commodity textile bags out of necessity. The practice was especially prevalent during the extreme hardships of the Great Depression (1929–1933) and during other materials shortages brought on by World War II. Dresses made from these sacks are evidence of the critical role that home sewing of reused materials played in everyday lives.

Commodity textile bags—more often called gunny, feed, or flour sacks—were frequently repurposed during the first half of the twentieth century. Women in rural parts of the United States used them to make clothing and home goods for their families to save money. Manufacturers used fabric bags for chicken and rabbit feed, as well as for human food such as flour, sugar, salt, seeds, and even tobacco. Authors Kendra Brandes and Loris Connolly explain that women used the fabrics from these bags—often called osnaburg, sheeting, percale, muslin, and even “chicken linen”—to make clothing and household items including dresses, shirts, underwear, bibs, aprons, trousers, dishtowels, quilt backing, and drapery. The fabric wore well and was essentially “free,” making it ideal for children’s clothing, which needed replacing often.

In the early nineteenth century, food staples were packaged in wooden barrels. By the mid-1840s, the newly invented sewing machine allowed for more efficient production of textile bags. After the Civil War (1861–1865) cut off the availability of cotton to the North, bag manufacturers imported burlap from India. Early bags were made of coarse materials and readily reused as farm towels and rags.

Bag manufacturers began to offer a range of fabrics in the 1910s. Flour and sugar bags were made from tightly woven textiles such as percale and sheeting. They were light and soft, perfect for undergarments, dresses, towels, and sheets. During World War I (1914–1918), mills in the United States sent millions of pounds of flour to a war-torn Belgium in 49-pound (22 kg) sacks (half a barrel) to relieve starvation. Author Loris Connolly details how Belgians reused the bags to make simple clothing, but also heavily embellished them with “embroidery, paint, handmade lace, and beads” and returned hundreds of these “art flour sacks” to the United States as thank-you gifts. Ironically, once the United States joined the war in 1916, the military needed textile bags for things such as sandbags. They subsequently became scarce for home use.

The 1920s: From Beggars’ Balls to Presidential Pajamas

In 1921, Vogue reported on popular costumes worn to “Beggars’ Balls” where costumes could not cost more than $10. One of the costumes pictured was a woman dressed in head-to-toe flour sacks (with visible labels), with a sieve on her head for a hat.

According to author Margaret Powell, by 1925, manufacturers had begun printing labels on sacking cloth with water-soluble vegetable inks to make them easier to remove and helping to alleviate some of the stigma associated with clothing made from reused commodity sacks. Most bags were still available only in white. However, in 1925, Women’s Wear reported that the George P. Plant Milling Co., in St. Louis, introduced “flour packed in pink and blue gingham bags . . . in the Gingham Girl line. The printing on the bags is of such a nature that it can be washed out easily, leaving a large piece of gingham which may be used for an apron or dress.”

The Textile Bag Manufacturers Association quickly realized the importance of attracting women to their products and published the book Sewing with Flour Bags around 1928. Connolly points out that, “attracting feminine attention to get the masculine dollar” was especially important “in packaging feed for the booming baby chick business where ‘women folks, with their motherly instinct’ seemed to be developing their entrepreneurial skills better than men.”

Furthering the popularity of feed-sack clothing, in 1928, President Calvin Coolidge (who was famous for his frugality) was gifted a pair of handmade flour-sack pajamas by the Women’s Society of the Millard Avenue Presbyterian Church of Chicago, Illinois. The pajamas were sewn from five flour sacks and were meant as an endorsement of the President’s economic program. The coming Great Depression would make clothing and home goods made from feed sacks a necessity for more people.

On October 29, 1929, also known as “Black Tuesday,” millions of Americans lost their money in the largest stock-market crash in history. Scrambling to make do, people sold their belongings for cash. Still, millions became homeless. Women across the country began sewing at home to save money, but store-bought clothing and fabric were both a luxury. Feed sacks, however, were more available and became more commonly reused to create apparel for both adults and children.

In 1929, Southern women participated in home demonstration clubs, exhibiting burlap coats and dresses, curtains, and undergarments made from feed sacks at farm conventions in response to farm income losses. They continued to meet and create garments for at least the following two years, according to Women’s Wear Daily. By the mid-1930s, trade organizations and milling companies were working hard to stimulate interest in using cotton bags for home-sewing projects to keep profits up and prevent the unsanitary practice of refilling sacks at flour mills.

Women had been dyeing sack cloth to add interest to their sewing projects; however, in the late 1930s, several textile-bag companies began producing bags in a variety of bright patterns. Some companies had previously experimented with gingham and calico, but the Percy Kent Bag Company of Kansas City, Missouri, offered “Tint-Sax” in pastel colors in 1936. (Several other companies later claimed to be the first to sell colored and patterned textile bags.) Richard K. Peek, vice president of the Percy Kent Bag Company, would later be described in a 1946 issue of Time magazine as the “acknowledged Hattie Carnegie of sack fashions.” By 1939, several other textile-bag manufacturers, including Gooch Flour & Milling Co. of Nebraska, were creating patterned and colored feed-bag fabrics specifically for women’s dressmaking. 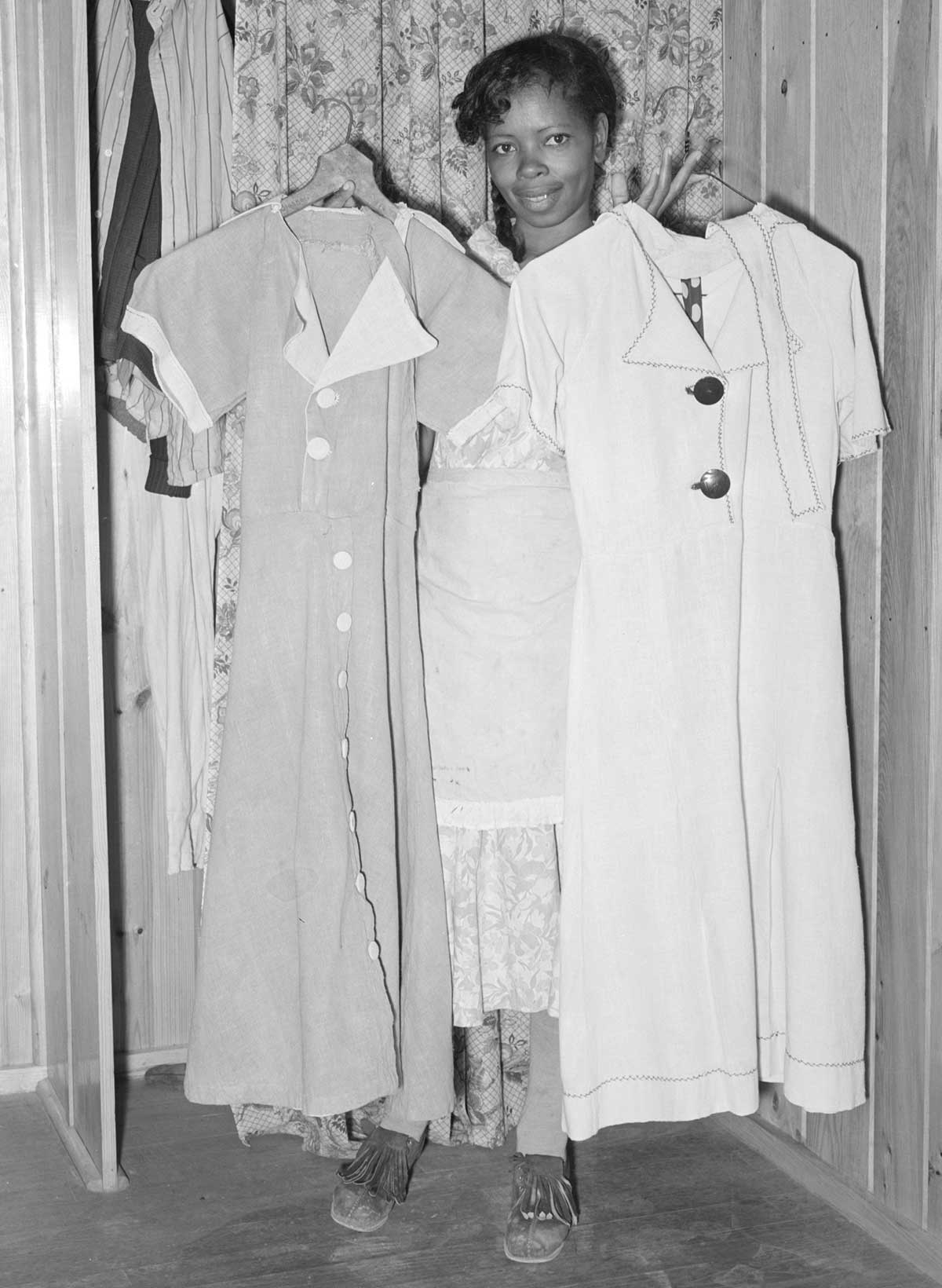 A woman displays dresses that she made from flour sacks at Sabine Farms, Marshall, Texas (1939). Photo by Russell Lee. Courtesy of the Farm Security Administration: Office of War Information Photograph Collection, Library of Congress

The 1940s: From Rationing to Department-Store Demand

After the United States joined World War II in 1941, rationing was introduced, and home-sewn commodity-bag clothing remained a necessity for many. The United States created the Office of Price Administration that year to control the distribution of supplies and enact price controls. Several commonly used products were rationed, including gas, coffee, sugar, meat, shoes, and fabric. Shortages on American soil resulted in rationing as early as 1942. People were encouraged to buy only what they needed, to repair and maintain what they had, and to support the war effort to the best of their abilities. Both the United States and British governments used the phrase “Make Do and Mend” to help remind citizens to conserve supplies and materials, turning the necessary thrift of the Depression into patriotic sacrifice.

In 1943, the War Production Board began reserving cotton fabric for military and industrial use exclusively. Consequently, dressmaking material became scarce. Commodity bags, however, fell into the industrial-use category, and they could be reused. Textile-bag manufacturers and trade organizations took the opportunity to begin a nationwide advertising campaign: “A yard of material saved is a yard gained for victory.” Many women were inspired to create patriotic-themed quilts from sacks to raise money for the war effort.

Farm women regularly swapped feed-sack fabric at “Sack and Snack clubs.” Various news outlets—including Time, Reader’s Digest, Business Week, and The American Magazine—also highlighted the use of commodity bags for clothing during the 1940s. Consequently, sales of cotton bags reached their peak during the war years.

Women continued to rely on feed-sack fabric throughout the United States’ involvement in World War II. The trend for sacking-cloth items continued even after the end of the war, as did the shortage of cotton. According to Connolly, Senate hearings in March 1946 investigating the continued shortage of low-priced cotton apparel found it was apparently because “all the available cotton goods were going into feed sacks, not dresses.” Flour and feed manufacturers stimulated consumer demand by becoming fabric designers, hiring consultants and designers and maintaining research departments to keep up with the competition and trends. Major retailers, such as Macy’s and Sears, even carried items made from sack cloth into the late-1940s, giving “city folk” access to the items made popular by poor rural housewives.

By the 1950s, the number of novelty bag fabric prints increased—an attempt by manufacturers to maintain public interest. Bags came in a dozen different kinds of fabric—even denim and rayon. Novelty prints and patterns included stripes, Disney, Hawaiian, Western, paisleys, plaids, or coordinating two-in-one florals and geometric prints. However, the now- prosperous post-war United States meant bag fashions and housewares were simply unappealing and unnecessary in most homes. Commodity industries also began to use double-walled paper bags instead of fabrics. Bag manufacturers tried to stimulate interest through sewing contests, but home-sewn commodity-bag fashion was uncommon for most after 1961.

Heather Vaughan Lee is a historian and author. Her recent book, Artifacts from American Fashion (Nov 2019, ABC-CLIO), tells the history of twentieth-century America in more than 40 articles of clothing. Learn more at www.fashionhistorian.net.