Many textiles don’t survive the ravages of time, but artifacts found in Magdalena de Cao Viejo, Peru, piece together a story told in ancient stitches.

No complete stocking has been found in excavations of the colonial town of Magdalena de Cao Viejo, Peru. Of the two artifacts of cotton knitting that are identifiably stockings, one has stripes of natural and light brown, and the other has stripes of natural and dark brown with a checked pattern. This project combines both elements: a stripe pattern in natural and light brown accented by bands of the checkerboard pattern in natural and dark brown. At least two wool stocking artifacts from Magdalena de Cao Viejo are knee length with some leg shaping, and the cotton examples, although partial, also have a few decreases to shape the leg. These decreases are retained in the project. 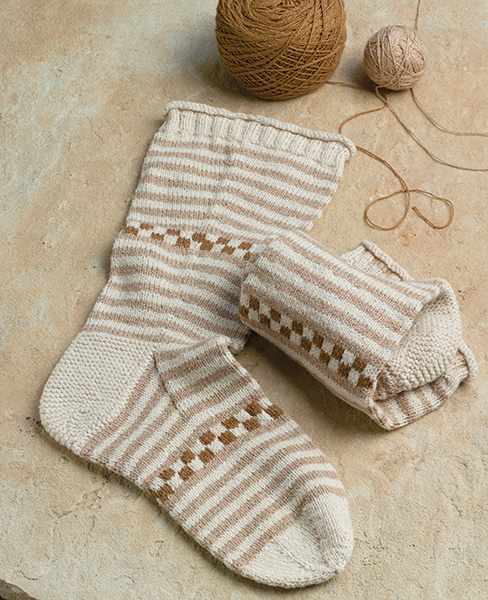 Carrie Brezine’s handsome stockings were inspired by the two knitted stocking artifacts excavated at Magdalena de Cao Viejo, Peru. Her version combines the patterns of both stockings into one attractive design of stripes and checks.

One surviving cotton stocking has an incomplete rectangular heel flap in garter stitch. Indeed, all of the heels found on cotton and wool stockings were worked in garter stitch, but no entire heels exist. Most have been worn through. Scraps of woven linen cloth still attached to the heel area of a couple of the stockings show attempts at patching to extend wear. Without a complete heel, it is impossible to know how colonial Andean knitters handled the junction of foot and leg. In all surviving samples that include stitches picked up around the garter-stitch area, the direction of stockinette-stitch knitting is perpendicular to the direction of garter-stitch knitting. No live heel flap stitches continue into the bottom of the foot. The project heel thus is shaped so that the stitches for the gusset and bottom of foot are all perpendicular to the direction of garter-stitch knitting.

The few existing knitted artifacts that show a stocking top or toe are made of wool. There is no ribbing at the top (as the stockings would have been held up with garters, ribbing would not have been necessary); the cast-on edge begins immediately in stockinette stitch, which causes the resulting knitted fabric to curl outward. The project stockings have a curled top edge, but I have followed it with a band of ribbing to help keep the stockings up without garters.

Carrie Brezine has a PhD in anthropology and studies pre-Columbian and early colonial Andean textiles and mathematics. She is especially interested in the ways in which technical textile skills were used to express personal identity. Her analysis of the textile collection from Magdalena de Cao Viejo, Peru, provided a critical dataset for her dissertation, “Dress, Technology, and Identity in Colonial Peru.” She thanks principal investigator Dr. Jerey Quilter for giving her the opportunity to study the textiles from the site. The staff at the Museo Cao, especially Carmen Gamorra de la Cruz and Arabel Fernández López, were very helpful, and Meredith Keer’s photographs have proved invaluable to Carrie’s continuing study of the Magdalena collection. In September 2012, Carrie presented a version of this article to the 13th Biennial Symposium of the Textile Society of America in a paper entitled “Knitting a New World.”