Mabel Herbert Urner: Collecting Needlework in Fiction and in Fact

No article about Mabel Urner as a writer was complete without a reference to her passion for collecting needlework samplers and textiles.

Helen and Warren may be the most famous American couple that you’ve never met. However, every week for more than thirty years from 1910 to 1944, newspaper readers across the United States, Canada, and Great Britain followed every detail of their lives. Their creator, Mabel Herbert Urner (1881–1957), based the fictional couple’s exploits on her own life, which included frequent travel with her husband, Lathrop Colgate Harper (1867–1950), a member of a prominent New York City family. She wrote of their travels, of trying new cuisine in Manhattan, of their Persian cat, and even of the more mundane experiences of married life, including visits from in-laws.

The first installment of the column, “The Disillusionment of the Honeymoon—The Eighth Day,” ran in the Minneapolis Tribune in July 1910. Eventually, the column would become The Married Life of Helen and Warren; it was syndicated first by Hearst Publishing and then later by McClure’s. According to a 1924 Washington Post article, “In these domestic episodes Mabel Herbert Urner has evolved a new style of fiction. She has taken up the everyday life of an average American couple, and, while investing the narrative with all the intimacy of an actual recital of facts, she preserves the charm of romanticism.”

Importantly for textile lovers, both Mabel and her fictional counterpart, Helen, collected needlework samplers and other textiles during their trips. Mabel amassed a remarkable collection that is now part of three New York City museums: the New-York Historical Society; the Cooper Hewitt, Smithsonian Design Museum; and The Metropolitan Museum of Art.

There is little documentary evidence of Mabel Urner’s early life, including her education or how she came to New York. The New York Times announcement of her 1912 marriage to Lathrop Colgate Harper stated that she was a divorcée, but nothing is known about her first marriage. Perhaps the title of her first book, The Journal of the Neglected Wife, holds a clue to the demise of her first marriage.

Mabel Urner’s writings were very popular: Balboa Amusement, an early California movie studio, produced a serial movie, The Neglected Wife, based on her first two novels in 1917. A 1925 Washington Post article stated that film producer William Fox (1879–1952) had bought rights to the Helen and Warren columns for a serial film. In 1938, the Palm Springs, California, Desert Sun reported that Selznick International was working on producing a Helen and Warren film (along with a another movie called Gone with the Wind). But a film about the couple never happened.

Lathrop Colgate Harper’s family roots went back several generations in New York. His great-uncle was New York City Mayor James Harper (1795–1869), and he was a second cousin to the Harpers of Harper & Brothers, a publisher based in New York City. The couple became active in a variety of New York cultural institutions, including the New-York Historical Society, the Authors’ League of America, the Pierpont Morgan Library, the National Arts Club, and the American Antiquarian Society. Harper was one of the foremost rare book dealers of his time and helped form major collections at numerous universities. He became a renowned expert on incunabula, books printed before 1501.

Producing a weekly 1,500-word column, in addition to the many other short stories she wrote, was a full-time job for Mabel for most of the year. According to a 1921 article in Editor & Publisher, she worked from nine to five every day with a secretary. She told the reporter that she rewrote the articles six to eight times in order to keep the narrative within the published word limit. Mabel kept journals and diaries where she recorded physical descriptions of people, snippets of overheard conversations, and newspaper headlines.

No article about Mabel Urner as a writer was complete without a reference to her passion for collecting needlework samplers and textiles. The 1924 Washington Post article stated, “A few weeks ago Mrs. Harper gave an exhibition of her collection for the Needle and Bobbin club [sic] of New York—a club of lace and other needlework collectors.” A piece in the same newspaper five years later noted, “[H]er hobby is the collecting of embroidery work of the seventeenth and eighteenth centuries.” In addition to being a significant source of material for the Helen and Warren column, details of Mabel and Lathrop’s annual trips to Europe were documented in the society column of The New York Times. In fact, Mabel became so well-known for her knowledge of European travel that she published a series of travel pamphlets. A 1937 newspaper ad for the Helen and Warren Guidelet to Europe assures potential purchasers that the publication includes information “For collectors—antique shops and rag markets. . . .”

The columns also provided insight into how Mabel Urner found pieces for her collection. “Their Ramble Through Amsterdam Ends in a Disappointing Purchase,” which appeared on November 19, 1922, demonstrated her quest for early samplers. “While Warren looked through some dusty vellum-bound books, Helen explored the dim, rear recesses in her eager search for ‘bargains.’ ‘Have you any old needlework? Samplers, caps or laces?’” She is excited to purchase a sampler dated 1647 only to have Warren point out that stitches in the six in the date were cleverly removed; the actual date is 1847.

In the May 30, 1930, Helen and Warren installment, Helen buys a purse from an antiques dealer in Germany, paying more than a “wheeling-dealing American” is usually willing to pay. Expressing delight in her exploration of the shop, Mabel writes, “How she loved it! Just the feel of the lustrous old fabrics.” She gives us an idea of how much she enjoyed these buying excursions.

Upon her death, Mabel Urner (as Mrs. Lathrop Colgate Harper) bequeathed parts of her collection, as well as Harper family photographs and papers, to several New York cultural institutions. Befitting the prominence of the Harper family in New York, the papers and photographs were donated to the New-York Historical Society along with one significant piece of needlework: the Tree of Knowledge sampler (accession number 1957.208) created in 1792 by Christina Arcularius Harper (1777–1860), Lathrop Harper’s grandmother. 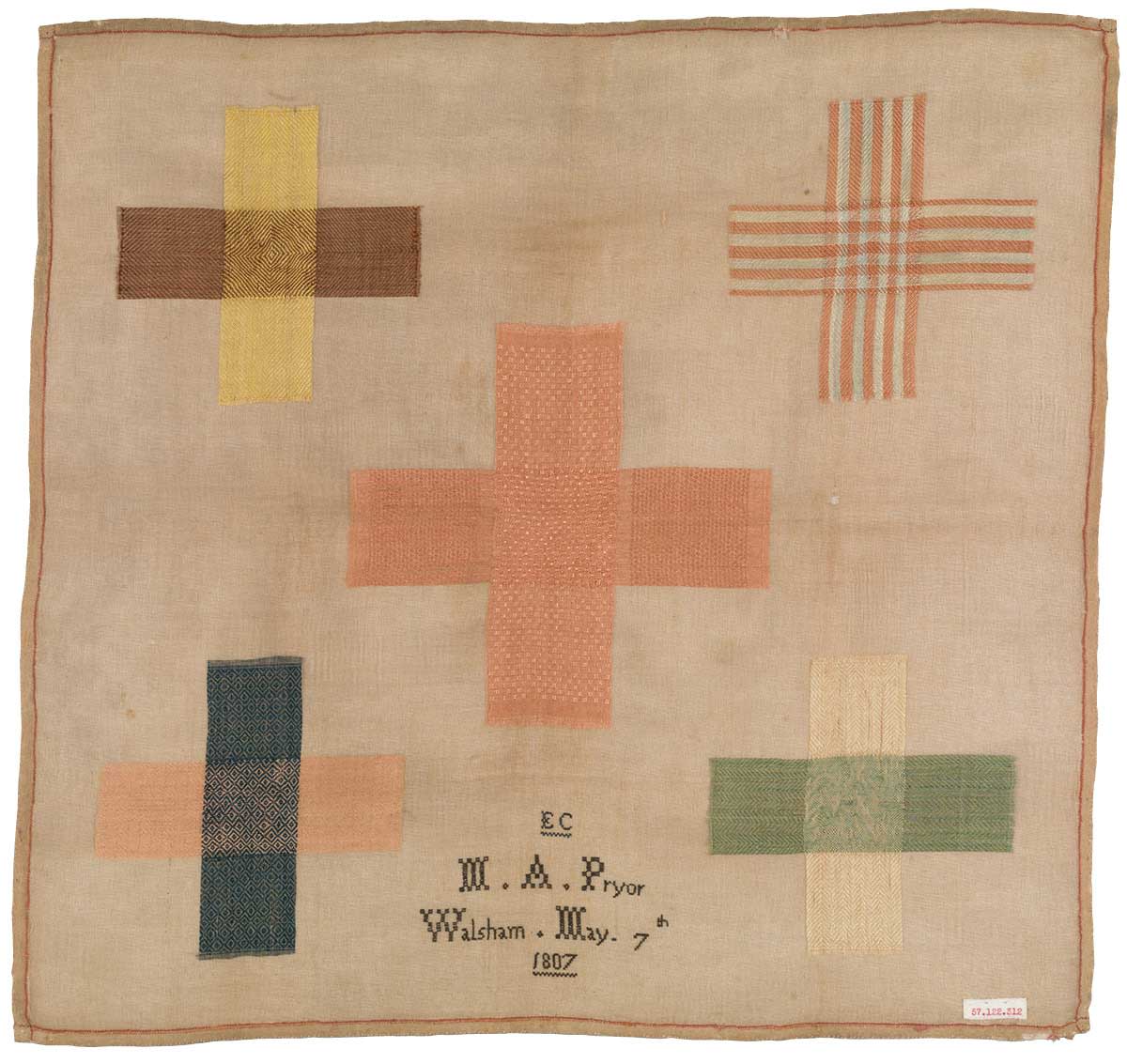 The bulk of Mabel’s collection, more than 800 samplers, was given to The Metropolitan Museum of Art in 1957. Edith A. Standen (1905–1998), associate curator in charge of the Textile Study Room, detailed the gift in a 1958 article in the Metropolitan Museum of Art Bulletin. In “First Efforts of an Infant’s Hand,” Standen wrote, “One of the most interesting aspects of Mrs. Harper’s vast collection is that it includes samplers from so many countries, ranging in date from the seventeenth century down to almost the present day. . . . In Mrs. Harper’s collection nearly every known variety is represented and there are groups that have not, so far, been studied in books on samplers.” Examples range from eighteenth-century American alphabet samplers to a nineteenth-century German knitting sampler.

Currently on view at the Metropolitan is an early nineteenth-century sampler (accession number 57.122.803) made in Boston by Hannah B. Loring (1800–1868). It is silk, cotton, and paint on silk and measures 26 by 17 inches (66.0 by 43.2 cm); at the top is a clock underneath which is stitched “The Family of Mathew Loring & Nancy, Sarah & Mercy Loring” with a list of births. The list indicates that her father was married three times. Two landscape images flank the clock, including one with a traditional Dutch windmill. At the bottom are images of an urn and willow trees, commonly found in memorial samplers from the time period. 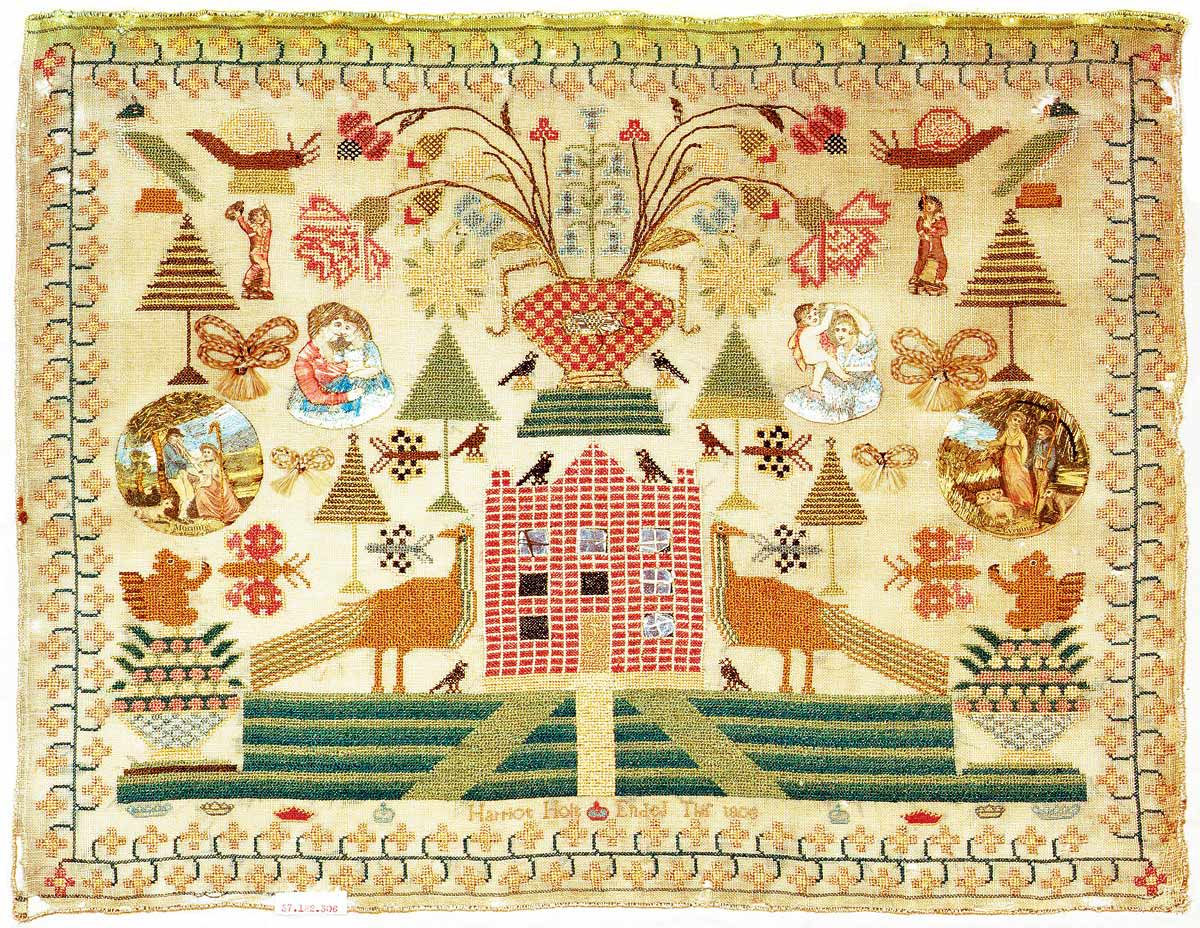 Another remarkable sampler from the collection dates to circa 1661 to 1663 and was the creation of a Margaret Barber (see page 61). This British piece is worked on linen with silk and linen thread. The sampler is divided into three stacked sections, each showcasing a specific technique: the top third is worked in color and includes an embroidered alphabet; the middle section is worked in white thread on a white ground and features geometric designs and the maker’s name and dates of creation. According to the museum’s website, “The bottom third is worked in reticella, a technique that originated in the late fifteenth century. The technique developed from cutwork and utilized stitches common to embroidery. Threads were pulled from a plain weave linen fabric to create open spaces in open areas throughout and arched and scalloped borders.” 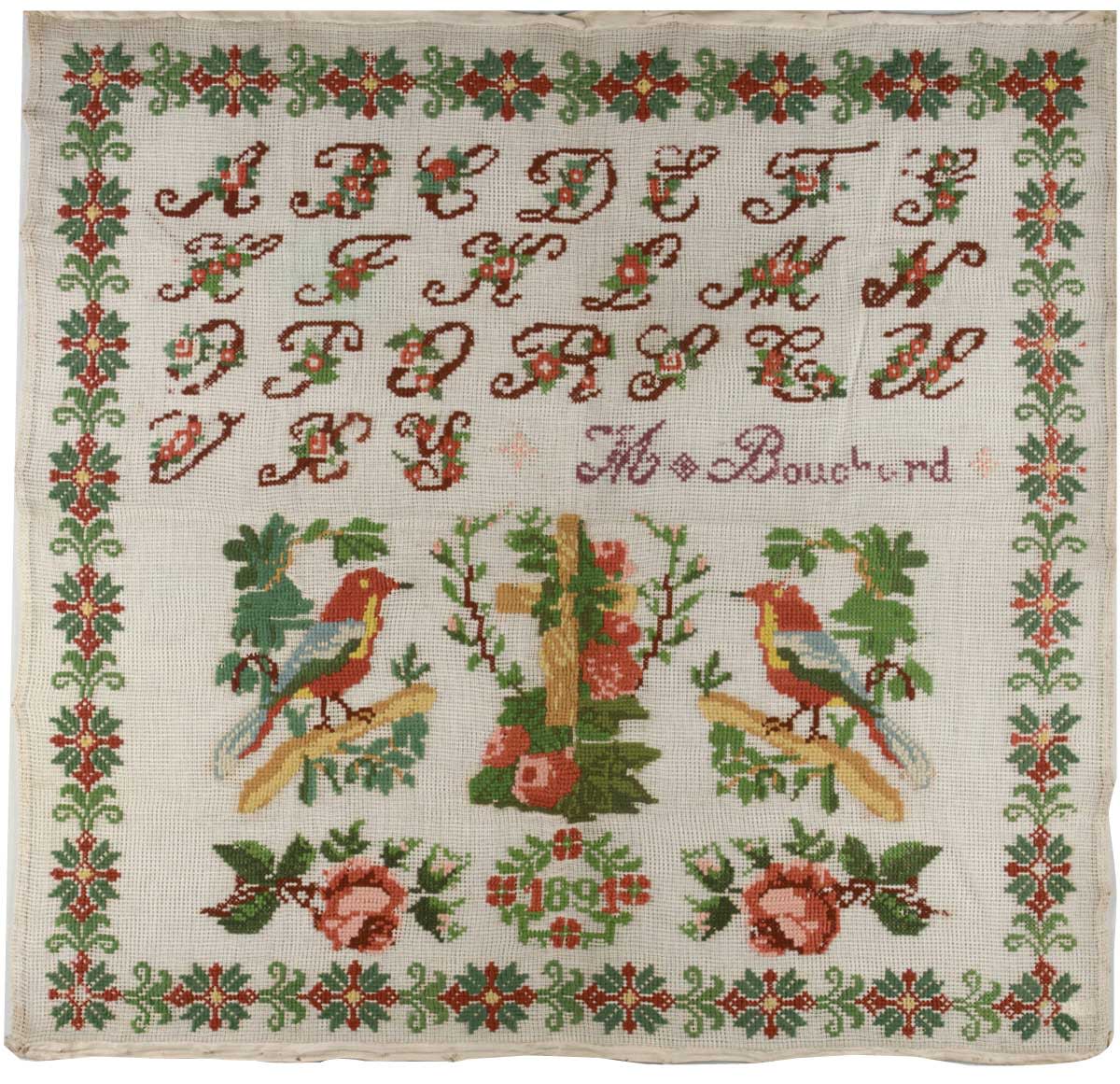 During her lifetime, Mabel Urner was a member of the Cooper Union Museum, which became the Cooper Hewitt. She left more than 400 objects to the museum, and they include an elaborately embroidered twentieth-century Korean rank badge (accession number 1957-180-97); a sampler from Mexico (accession number 1957-180-84) that dates to 1744 and features white linen embroidery and drawn-thread work; and several beaded bags, including one from Germany (accession number 1957-180-3), which resembles the purse Helen buys in the 1930 column, “‘Why, it’s a wonderful bag!’” The silk bag decorated with ceramic beads and with a metal clasp dates to 1855 through 1865. The colorful and detailed floral design features poppies, carnations, and possibly runiculas. 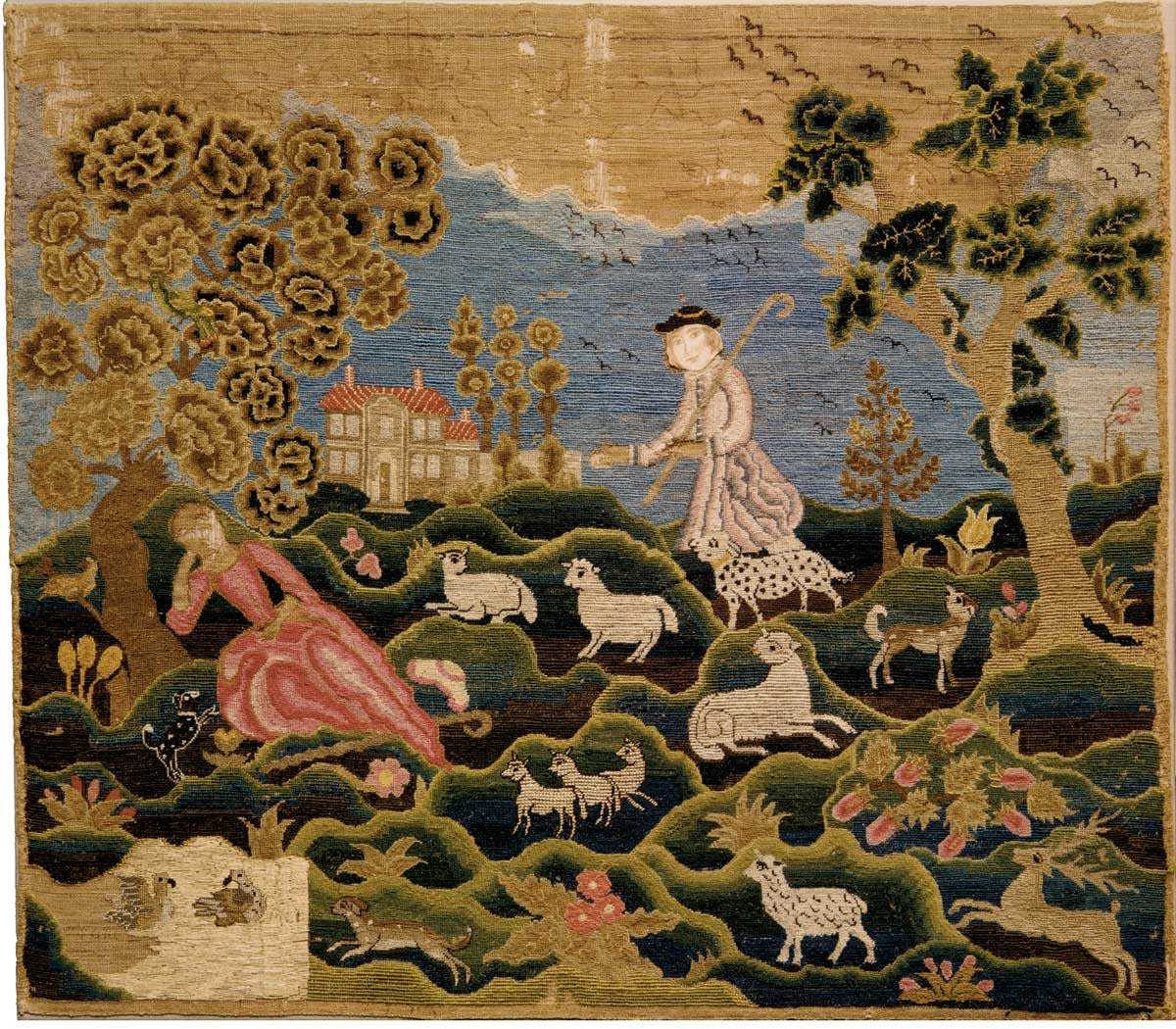 Today’s needlework enthusiasts are indebted to Mabel Herbert Urner for the amazing collections that she left behind. Her writings about collecting in her popular column provide insight into the enjoyment and enthusiasm with which Mabel amassed her collection, which continues to awe and inspire.

Bonnie-Lynn Nadzeika is an avid knitter, crocheter, and needleworker living in northern New Jersey. She enjoys combining her love of needlecrafts and history to find stories like Mabel's.