February 7, 1867 Beloved author of the Little House series of books (and needleworker) Laura Ingalls Wilder is born. Here’s the needlework connection to this date. 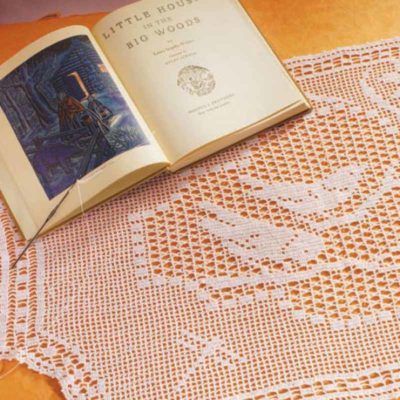 Belinda Carter’s reproduction of a doily. The original doily was worked by Laura Ingalls Wilder at Rocky Ridge Farm in Mansfield, Missouri. Photos by Joe Coca.

Several articles and projects featuring Laura and/or her needlework have appeared in the pages of PieceWork. The May/June 2008 issue featured instructions for reproducing a filet-crocheted doily that Laura had worked at Rocky Ridge Farm in Mansfield, Missouri. The original design for the doily was by Australian crochet designer Mary Card and included in her book New Book of Filet Crochet published in 1936. (If you love filet crochet, the January/February and May/June 2001 issues have articles on Mary Card. Both are accompanied by Mary Card filet-crochet projects.) 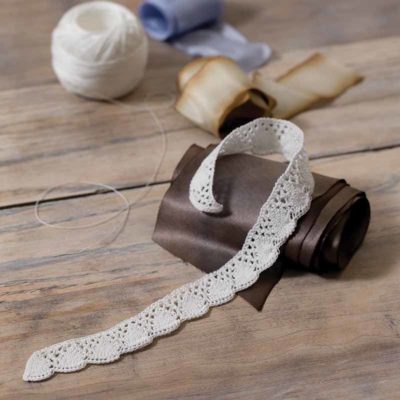 Mary Lycan’s sweet knitted edging that is the companion project to her article. “Laura Ingalls’s Knitted Petticoat Lace.” Mary selected the pattern from the November 12, 1879, weekly edition of the New-York Tribune as one that would be suitable for the edging Laura was knitting in The Long Winter.

For the May/June 2013 issue, Mary Lycan’s contribution, “Laura Ingalls’s Knitted Petticoat Lace,” delved into daily life for Laura and her family in De Smet, Dakota Territory, as described in The Long Winter. In that book, Laura is busy knitting lace to trim a petticoat. Mary selected a pattern for a garter-lace edging from the November 12, 1879, weekly edition of the New-York Tribune for her companion project.

Mary also included this sidebar on what the Ingalls family read: “In December 1880, with trains blocked by blizzards, Mr. Gilbert brought the westbound mail on from Preston (now Preston Lake, 10 miles [16.1 km] east of De Smet) by sled and team. The Ingallses’s bundle contained copies of the Advance, a Congregational church newspaper from Chicago for Ma; the Inter-Ocean weekly newspaper from Chicago and the Pioneer Press from Minneapolis for Pa; a bundle of copies of The Youth’s Companion, published in Boston and forwarded by a Sunday school class in Minnesota, for Laura and Carrie; and from the Reverend Alden, A letter for Mary describing the Christmas barrel, now frozen on a snowbound train, which they would receive the following May [The Long Winter]. They saved the stories in The Youth’s Companion for a Christmas treat.”